December 17, 2018An Interview with Constantine Stade of New Creation Bellringing

Bell Ringing in Scripture and Liturgy, from BLAGOVEST BELLS 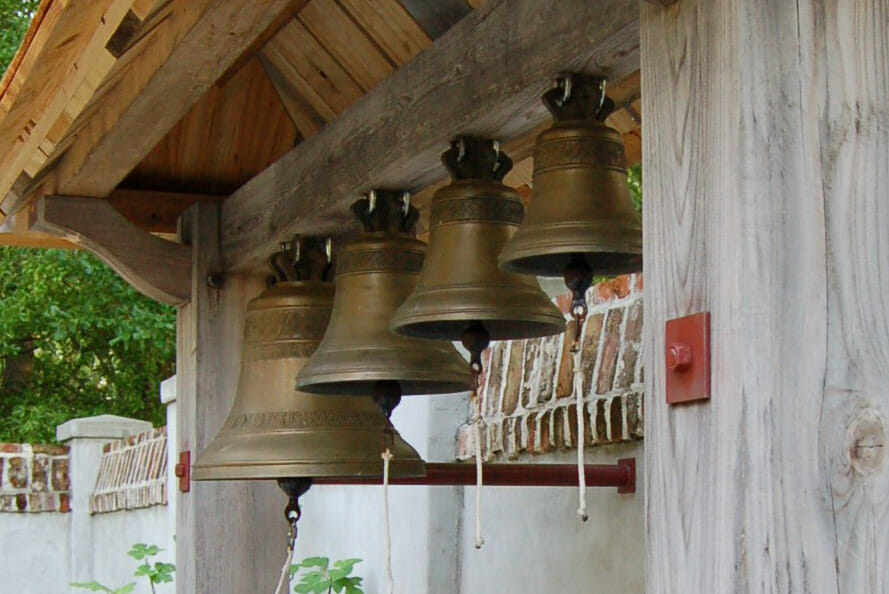 We have had a request for articles on liturgical bell ringing, so I am pleased to offer this excellent piece prepared by Mark Galperin and John Burnett of BLAGOVEST BELLS:

Church bell ringing is an intrinsic and permanent part of the Orthodox liturgical and musical tradition. It is deeply rooted in Scripture and thoroughly presumed in the Typikon. It’s not just “decorative”, a “nice” thing to have with our liturgy. “Church bell ringing is an integral part of Orthodoxy’s divine services, and its absence can be justified only by lack of the necessary instruments.”1 Accordingly, the teaching of our bellringing tradition is an important part of liturgical music education, and so it’s good to examine the Church’s tradition in some detail.

Bells, as such, are mentioned in the Bible in one context only: small bells are to be attached to Aaron’s vestments, which “shall be heard when he goes into the Holy Place before the LORD, and when he comes out, so that he does not die” (Exodus 28:33-35). This suggests that the sound of bells is protective, presumably because they give a kind of warning. Today we attach bells to the vestments of hierarchs, in conscious reference to Aaron’s bells, but we don’t usually thing of a protective function for them; yet on a different level, numerous miracles of divine protection have taken place in connection with Church-bell ringing in Orthodox communities.

Among the musical instruments used in the services in the Tabernacle and in the Temple were bronze cymbals. David appointed Asaph, a cymbalist, as Chief Musician before the Ark, an office in which his descendants continued in Solomon’s Temple and beyond.2

Cymbals are related in form and function to church bells. The cymbal is a venerable musical instrument of Asiatic origin; an early example, depicted in Fig. 1, was recovered from Tell Abu Hawam, near Haifa, Israel.3 Made sometime around 1300 BC, it is only a little earlier than the first Old Testament references to such instruments. The example shown here is about 4.5 inches in diameter— the size of the smallest present-day church bell. Some ancient cymbals had a rounded central boss, as in Fig. 1, which makes them acoustically related to bells. Other cymbals even had a bell shape, as you can see in Fig. 2.4 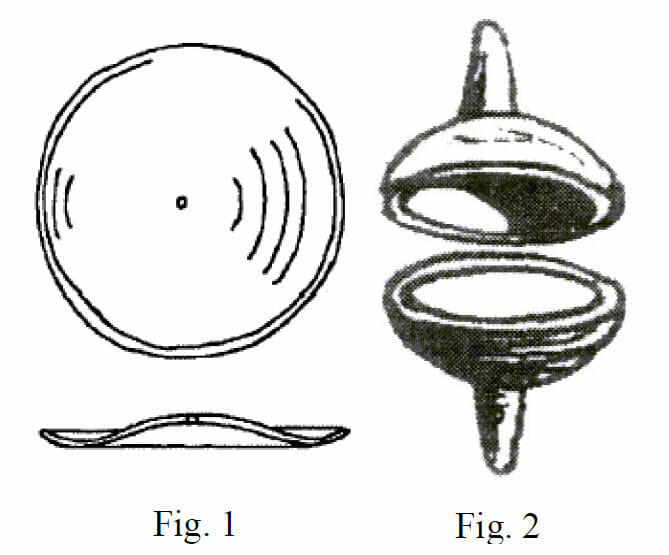 Despite this background, the liturgy relates bells not so much to Israel’s cymbals as to her military trumpets, although a dual function for Church bells is still indicated by the existence in Church-Slavonic of two terms for “bells”: kymvaly– from the Greek word κύμβαλα for cymbals and kampany– from the Greco-Latin word campana/καμπάνες for bells.

The reading chosen for the service of the consecration of a bell is Numbers 10.1-10:

The Church thus sees her bells primarily as the antitype of Israel’s military/liturgical trumpets—specifically, of the silver hatsotser, not the shofar, or ram’s horn, doubtless because bells and hatsotseroth are both made of metal, and because the primary use of both is for signaling and assembling. The shofar, being organic rather than metallic, was used more in intercessory contexts.

Note also in the reading from Numbers the prescription of different kinds of signal making up a “zvon [Russian: ‘sounding’] language”, if you will, and a specifically Aaronic, i.e., priestly, association with trumpets, while other musical instruments of the Temple were associated with lower orders of Levites [2 Chronicles 5:12 “Also the Levites which were the singers, all of them of Asaph, of Heman, of Jeduthun, with their sons and their brethren, being arrayed in white linen, having cymbals and psalteries and harps, stood at the east end of the altar, and with them a hundred and twenty priests sounding with trumpets”].

“In the Old Covenant, you commanded your servant, the Lawgiver Moses, to make silver trumpets, and the sons of Aaron, the priests, to blow them when they offered sacrifice to you, so that your people, having heard the voice of the trumpets, would prepare to worship you, gather together to offer sacrifices to you, and, at the resounding voice of these trumpets in time of war, would arm themselves with strength for victory over their enemies…” (First Prayer of the Consecration of a Bell).

Again, we contemplate bells as the antitype not primarily of the cymbals reserved exclusively for Israel’s praise, but of her trumpets of war, assembly, and worship. In other words, we envision not so much their musical, as their organizing and signaling function, even in worship. Israel in the desert was a military encampment, and even its worship had military overtones. Yet it must be stressed that Israel’s trumpets, and thus our bells, did have a quasi-musical function on occasions of sacrifice and praise as well.

“At the voice of the trumpet, when seven priests went before the Ark of Testimony, you caused the firm walls of Jericho to fall down and crumble, and delivered all who lived in the city into the hands of your people: Fill now also this bell with your heavenly blessing, that the voice of its ringing, when heard, may banish the power of contrary winds… and extinguish all… devouring lightning…” (Second Prayer at the Consecration of a Bell).

Here, the Church points to the cosmic significance of the Church’s use of bells, again in connection with trumpets and the military destruction of Jericho’s walls, and again in a priestly context. In fact, the assembling, worshipping, and cosmic functions are all priestly. Thus, just as the silver trumpets were to be blown by Levites, the Church sets apart bell-ringers by the Rite of Blessing the Bell Ringer, on par with taperbearers, psalm-readers and other clerics of basic rank.5

Now, the first two troparia which conclude the service of the consecration of a bell reiterate the typology of assembly and cosmic power, but the third adds a further dimension (also mentioned in the First Prayer): “banish all despondency and laziness from the hearts of your faithful. Graft the fear of you, together with godliness, in us who are hastening to prayer, and through your power, move us to make haste in every good deed…”. Here the bell is presented as an instrument of our interior warfare, our spiritual striving (as well as a signal to help us get to church on time!). And of course it is precisely this integration of the interior, spiritual, and mystical with the exterior, architectonic, and cosmic, which is Orthodoxy.

Yet it is the musical dimension of bell-ringing that will be of special interest to liturgical musicians. Orthodox bell-ringing is not just a simple bong-bong signal, nor even like the elaborate mathematical permutations of English change-ringing. Russian Church bell-ringing, in particular, not only announces the divine services and emphasizes certain moments in it, as Israel’s trumpets did, but also has the musical function of expressing the joy or sorrow (or sometimes both, as at a funeral) of different events in the Church and in the life of its people. This musical function is expressed specifically in the ‘concert-like’ forms of the trezvon or dvuzvon, compositions and improvisations of powerful beauty and delight that set the whole world dancing before and after the services. Now, to be sure, concert ringing is performed outside the actual services themselves, as a public anticipation and response to them. Yet if, as is well-known, musical instruments are not supposed to be used in our liturgical worship, we should ask why bells constitute the lone exception to this rule. After all, we offer reasonable worship to God (Rm 12.1)— logikê latreia, in Greek— i.e., worship characterized by logos; and logos is not a quality that inanimate instruments like bells possess. And even if we ring bells in line with the command in the Psalms to ‘praise him with trumpet sound… praise him with loud, clashing cymbals’ (Ps 150.3,5), still, we don’t ‘praise him with strings and pipe’, as the psalm also says. So, why bells?

The answer, we think, is to be found in Christ’s Great Commission to announce to all the world the joyous news of the Incarnation and Resurrection. Orthodox bells, in other words, do not simply preserve the liturgical and signaling functions of Israel’s trumpets, but extend them into a full, solemn, external, public, and above all cosmic expression of the joy, sorrow, and triumph of the Church as a whole, announced in the air to the entire universe. That’s why the whole region around Moscow used to throb with the ringing of bells on great feasts like Pascha: such a zvon represents the Church’s, or rather, Christ’s own announcement to, and claim upon, all of creation. That this takes the specific form of music comes as no surprise, of course. After all, what other response is possible, when Life is proclaimed to those in the tombs?

5. The Holy Synod of the Russian Orthodox Church, The Rite of Blessing a Bell Ringer,
Journals of the Holy Synod, Journal No. 98 for October 4, 2012, Internet
published on October 5, 2012 by Православие.Ru at the following URL:
http://www.pravoslavie.ru/news/print56519.htm.

Prepared by: Mark Galperin and John Burnett of BLAGOVEST BELLS.