January 15, 2014Santa Maria Antiqua – The Heart of the East in the Centre of Rome 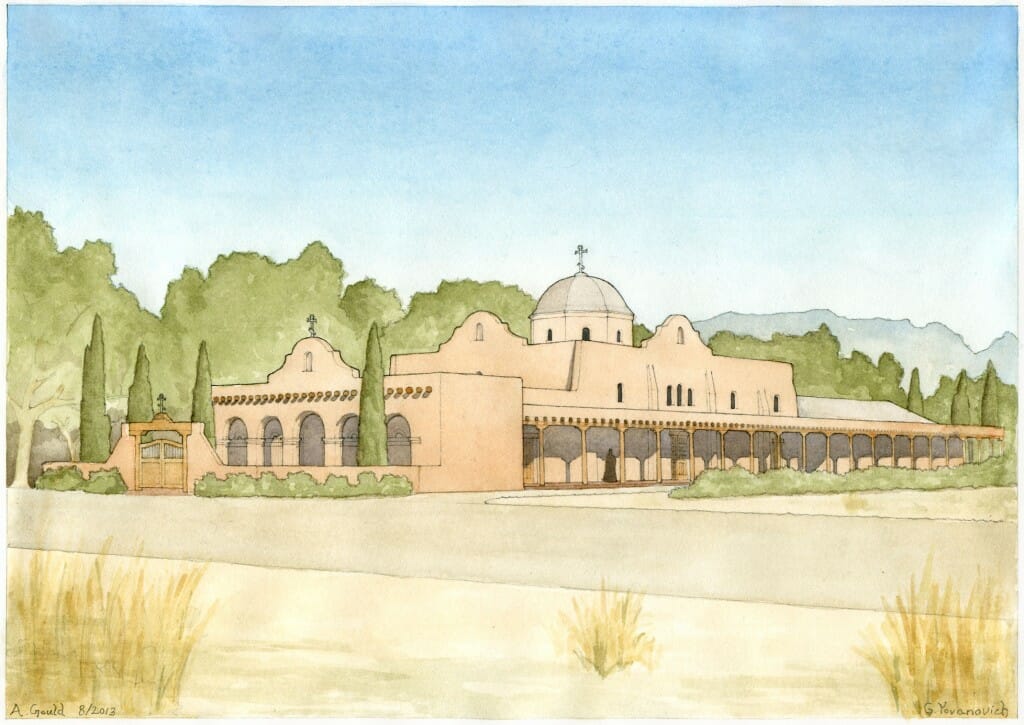 It has been my great joy this summer to devote some of my attention to Orthodox Christianity in New Mexico. Northern New Mexico has a strikingly different history and cultural context than the rest of the United States. It began as a colony of New Spain, an Imperial establishment at the absolute edge of the known world, 1200 miles from Mexico City, in a land inhabited by Indians dwelling in ancient communal pueblos. The governor’s palace, built in 1610, still exists, the oldest building in the USA except for the pueblos themselves. New Mexico is dotted with eighteenth-century churches, often built and painted by native peoples. They uniquely combine the structural forms of Indian pueblos with the liturgical art of the Mexican baroque.

To this day, the region maintains an intense cultural self-identity – a mixture of Spanish language, Indian art, and that curious combination of Catholic and New-Age desert spirituality. I find that some aspects of this local culture have an uncanny consonance with Eastern Orthodoxy. For instance, the religious paintings displayed in the old churches are probably more similar to Byzantine icons than Catholic art anywhere else in the world. There is a thriving community of ‘folk art’ painters who continue to work in this style. This enthusiastic body of iconographers, respected by both Catholic and secular New Mexicans, should be an example to the Orthodox. 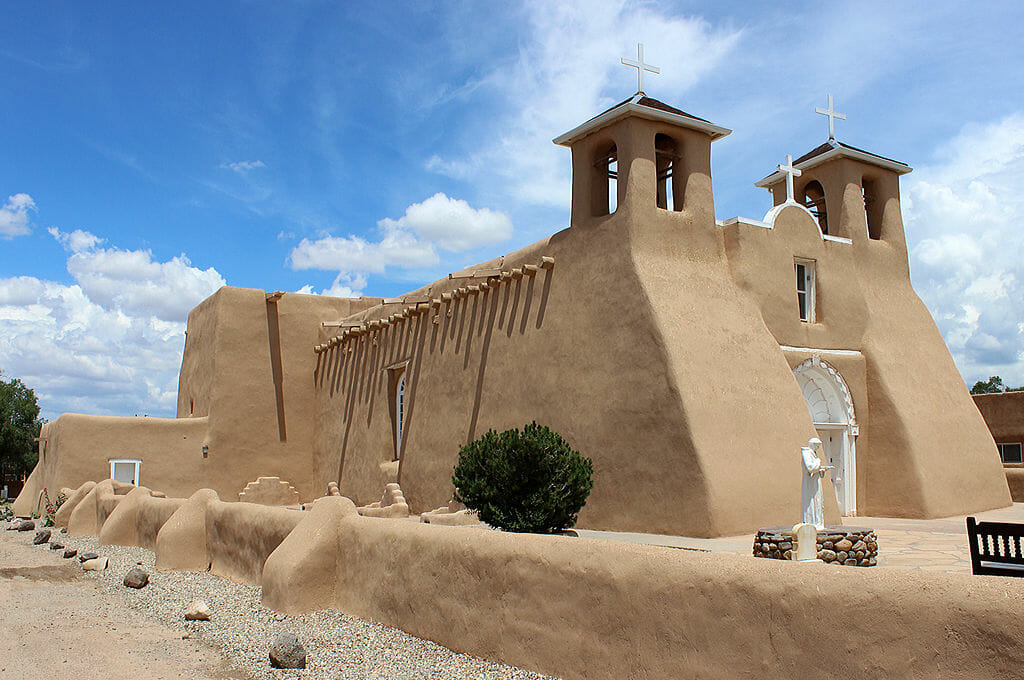 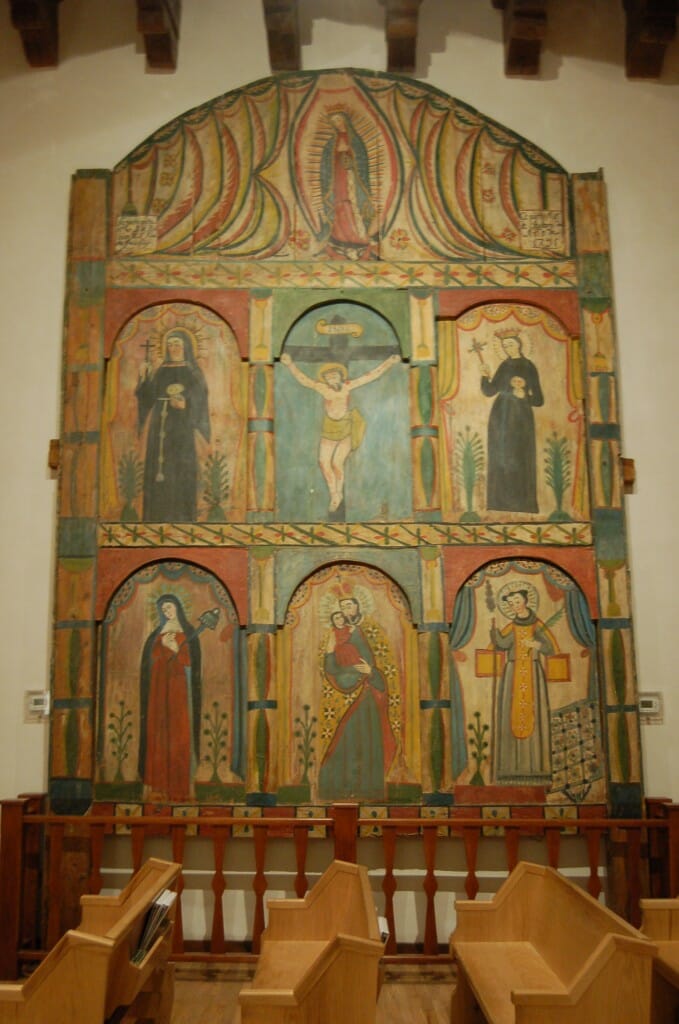 I was asked to visit the Orthodox Monastery of St. Michael the Archangel (OCA) in Canones, NM, to assist them with a plan for their growth. The monastery is located on the edge of a small village deep in the mountains outside Santa Fe. Overlooking the monastery is a mesa with the ruins of a thousand-year-old pueblo on top. The Spanish-speaking villagers still remember when they moved down from the pueblo and built houses in the valley four-hundred years ago, when the Spanish brought peace.

The monks here are acutely aware that their situation is unlike most Orthodox monasteries in America. Instead of bringing something ancient to a modern society, they find themselves sojourners in an ancient land, where the Middle Ages is still recent news. Very wisely, they wish to bring Orthodoxy into their desert valley as gently as possible, and to embrace the beauty of the local culture in every way that is compatible with their way of life. The monastery already has a small handsome chapel. The current superior, Fr. Silouan, has decorated the inside with carpets and icon cloths woven by the local Indians. There is a shrine to Our Lady of Guadelupe (authorized by Abp. Dmitri of blessed memory), and it is lit with tin lanterns, a local craft. Their services are sung largely in Spanish; the music is Byzantine chant, sung darkly and gently as suits the quiet desert. 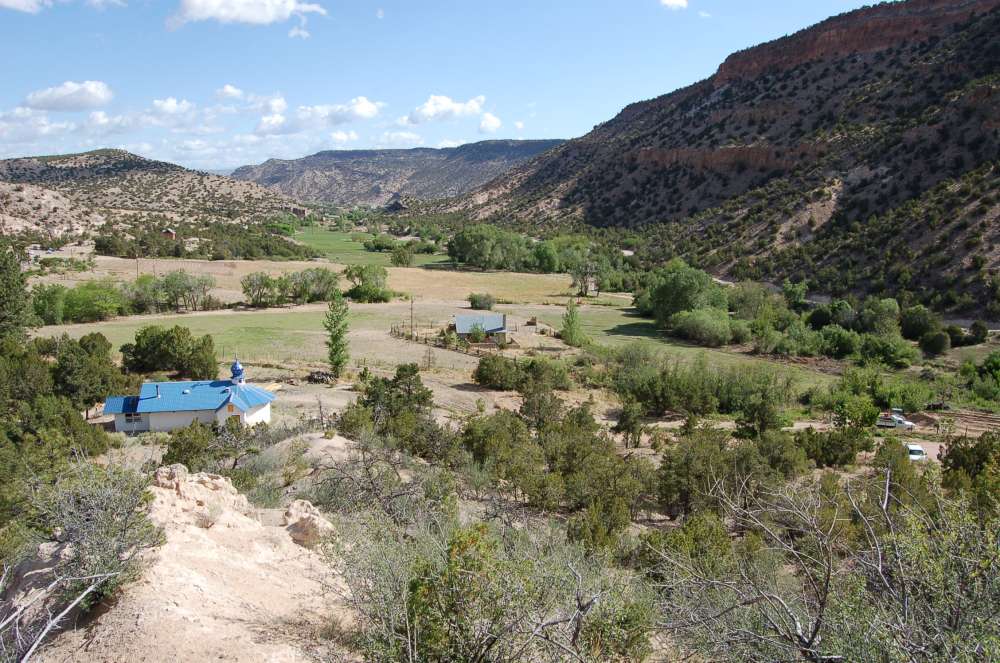 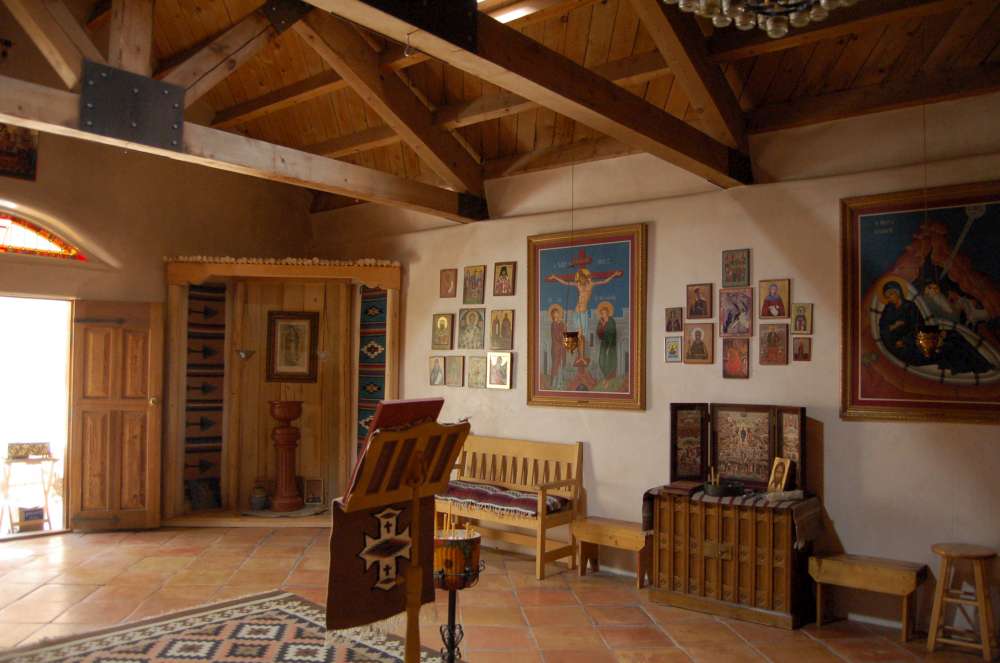 Inside the chapel at Saint Michael Orthodox Monastery

The monastery grounds are currently haphazard. There are a few good buildings and several that are not so good. They are working to irrigate their land and farm it properly. They asked me to show them how and where to build new buildings and gardens to make sense and beauty out of the place. I spent three days there studying and measuring, and then presented a master plan for all the future construction they might need. The design consists of a series of adobe buildings connected together by porches in the local style. The buildings surround a courtyard garden and frame the view of the mesa. A small chapel, mostly Byzantine, a little Spanish, stands as an ornament at the edge of the garden. It is a simple plan – one that the monks and their helpful neighbors can build gradually on their own. It honors the landscape and local traditions, but introduces the monastic tradition of living in the midst of a garden. 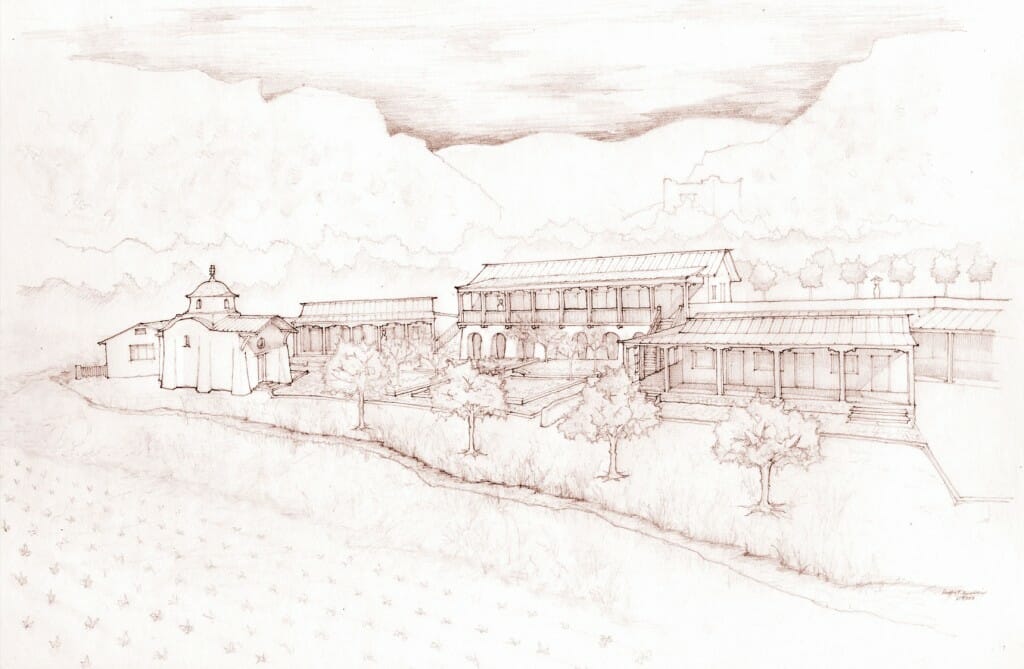 A rendering of the proposed master plan. Some of the buildings are existing (the one on the far left is a 200-year-old adobe farmhouse). The chapel, two-story refectory, and gardens, are proposed. 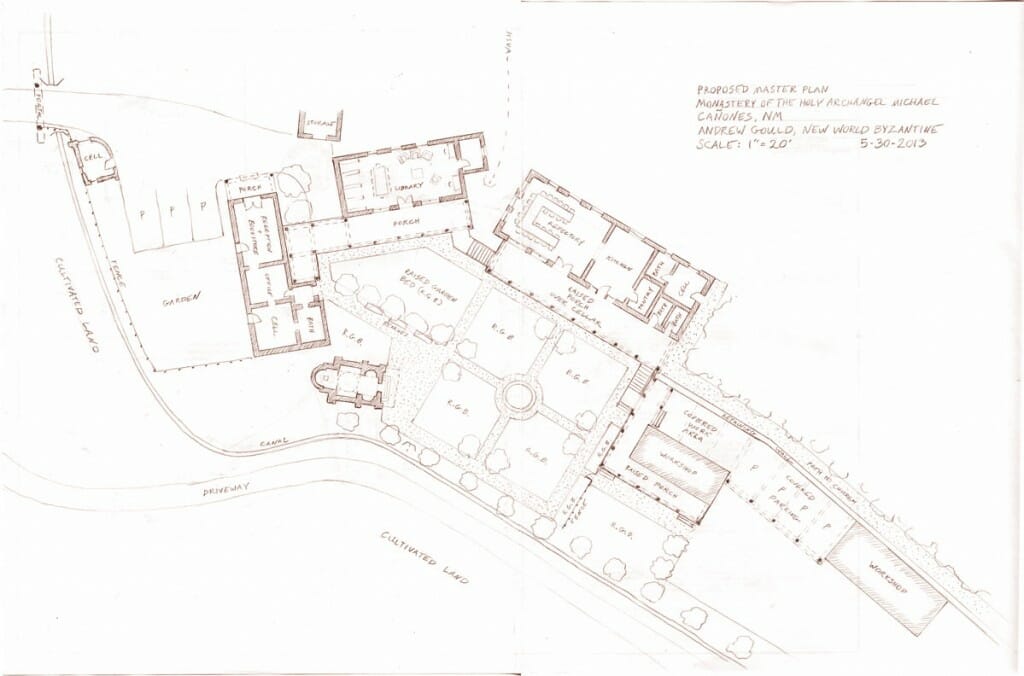 A site plan showing the proposed layout. The buildings must occupy a narrow curving strip of flat land. On the south side the land slopes up steeply. On the north side is an irrigation ditch that will be used to cultivate the terraces below.

I left the serenity of the monastery to next visit the young parish church of All Saints of North America in Albuquerque (OCA). This parish recently bought a parcel of land and put up a metal building for temporary space. The priest, Fr. Nikolay, asked me to consider their property and suggest a design for their permanent temple. Their situation was not the most easy to work with. The parcel is quite narrow and faces an unattractive road. And their metal building, which must remain as the future parish hall, leaves only a very constrained plot of buildable land in front. I had to find a way to make the temple address the street without completely exposing the front doors to it, and to make the metal building almost completely hidden behind it. Furthermore, their budget is rather modest for the largish church they would like to build, so great height and complexity had to be avoided.

In New Mexico it is quite normal to this day to build out of solid masonry, even adobe, and to roof with buildings with huge pine beams. It was an obvious choice to design this church using these local materials. I studied the historic Catholic churches of the area, but curiously they are all exceedingly long and narrow – not a proportion that is good for Orthodox liturgy, nor for this site. So I imagined how these old churches would have been built had they been wider and domed, and I came up with a design that seems to sit very naturally in the local building tradition. It is a big square masonry nave with four wood posts to support the roof. The ceiling and dome are built from beams and brackets in the local manner. The interior is thoroughly Orthodox – it contains an iconostasis and can be fully frescoed. The exterior is styled like the old Spanish mission churches throughout the Southwest – a very simple style, and one that is highly similar to seventeenth-century churches of the Greek Islands. A long covered walkway connects the old and new buildings and provides a shaded walk from the rear parking lot. A forecourt garden presents a welcoming face to the road while providing some separation for the peace and quiet of the church entrance. 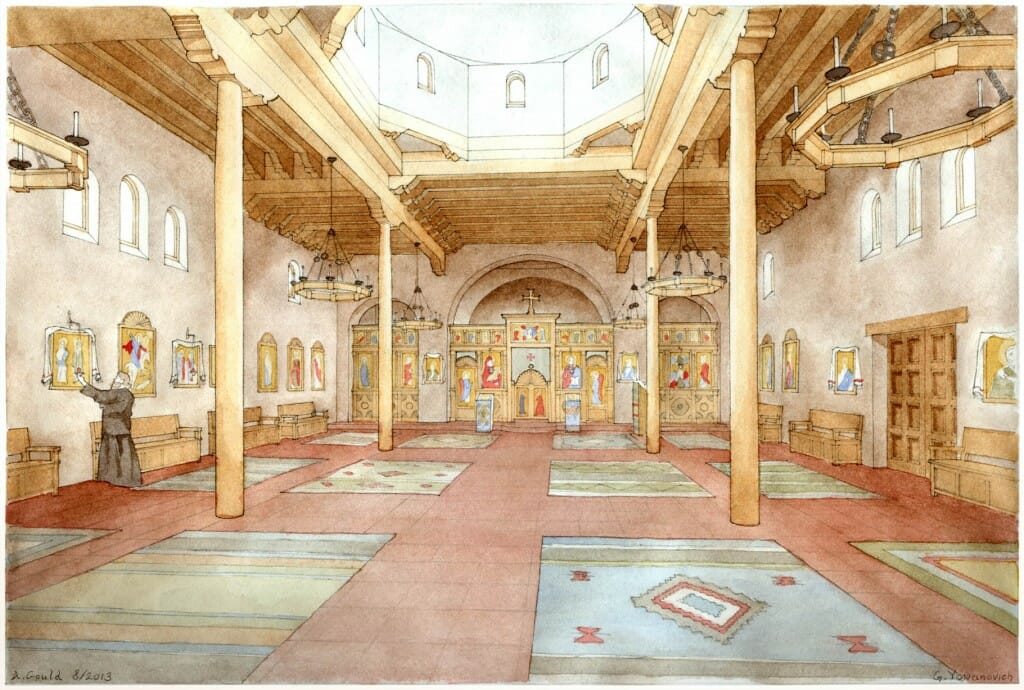 The proposed interior for All Saints of North America Orthodox Church. Only the walls are masonry. The exposed timber roof structure is an economical local technique. 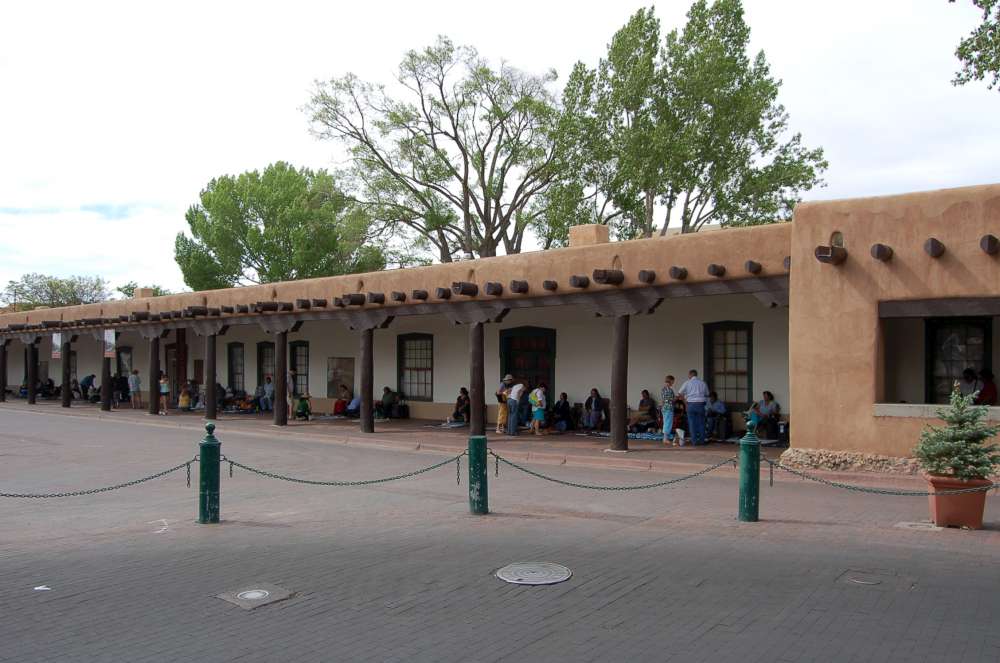 The original Palace of the Governors in downtown Santa Fe. Built in 1610. 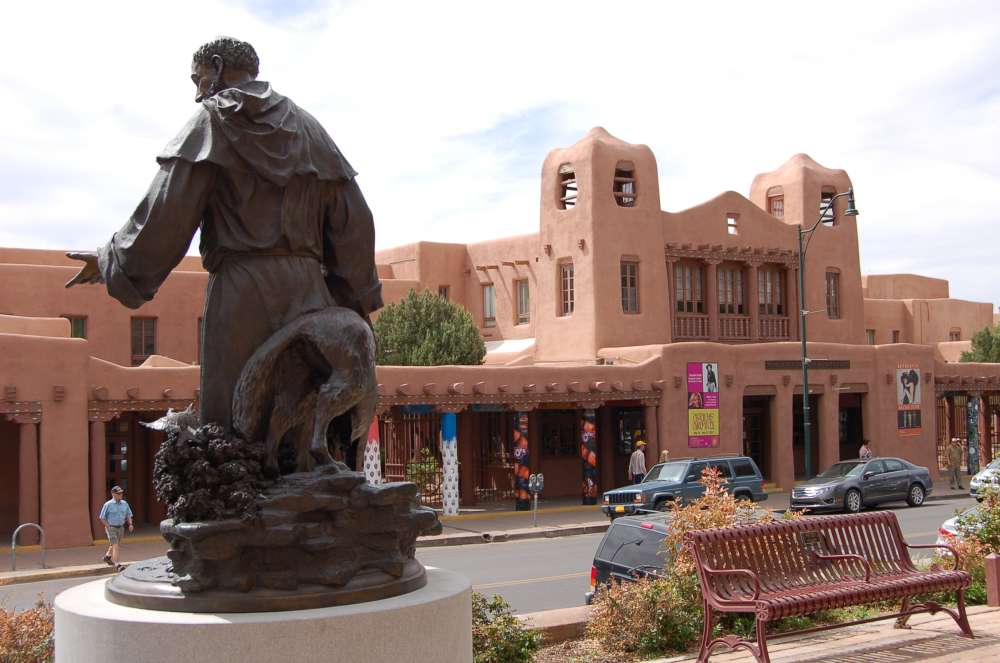 The architecture of downtown Santa Fe. In 1912 the city passed a law requiring all construction to be in the historic Pueblo/Mission style. This resulted in grand Pueblo-Revival buildings of the 1920s, such as this one, and has helped preserve the local building tradition to this day. 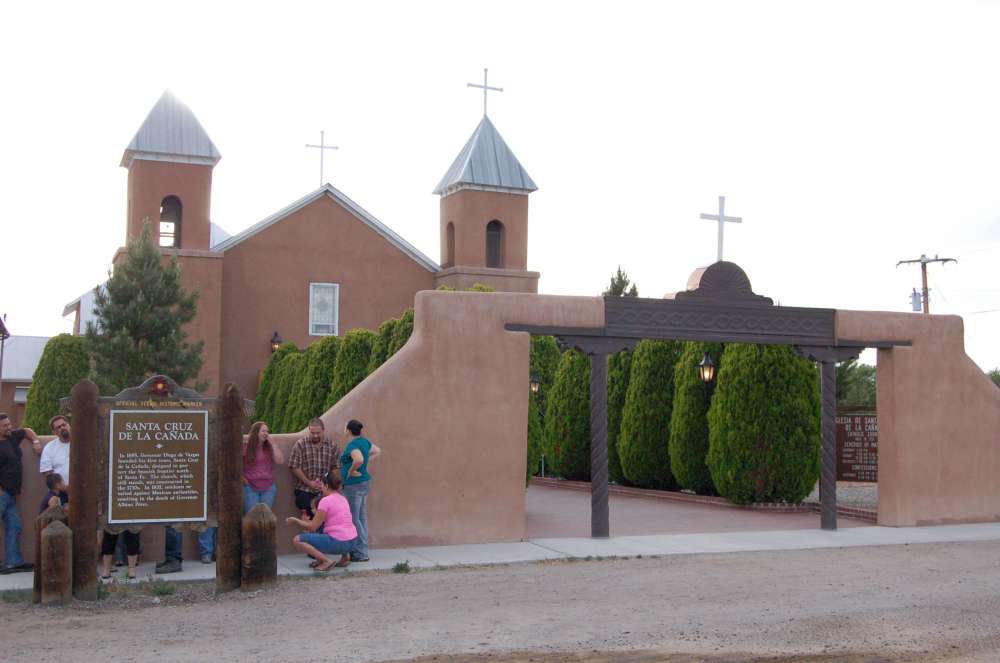 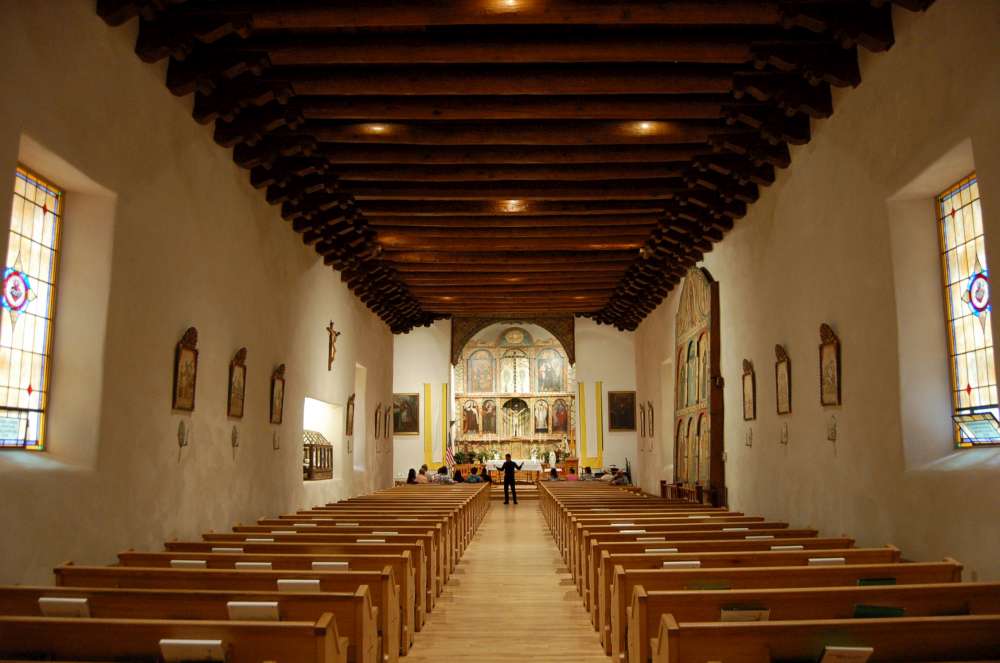 The interior of Santa Cruz. The long narrow proportion, with no interior columns, is typical of all the Spanish mission churches in the Southwest. 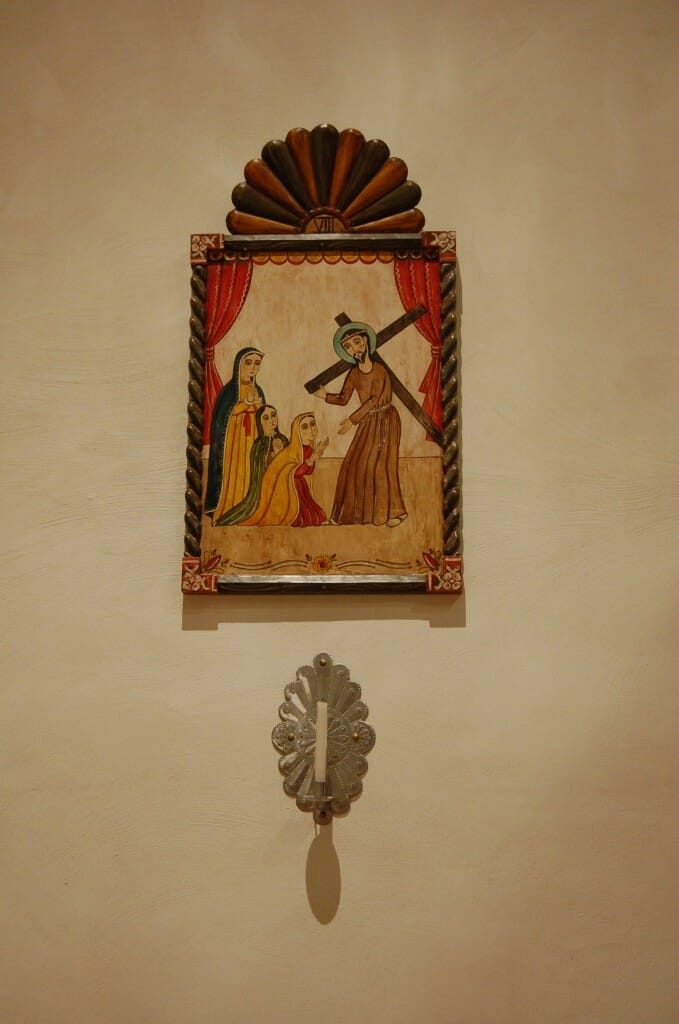 An early-nineteenth-century station of the cross in Santa Cruz de la Canada Mission. 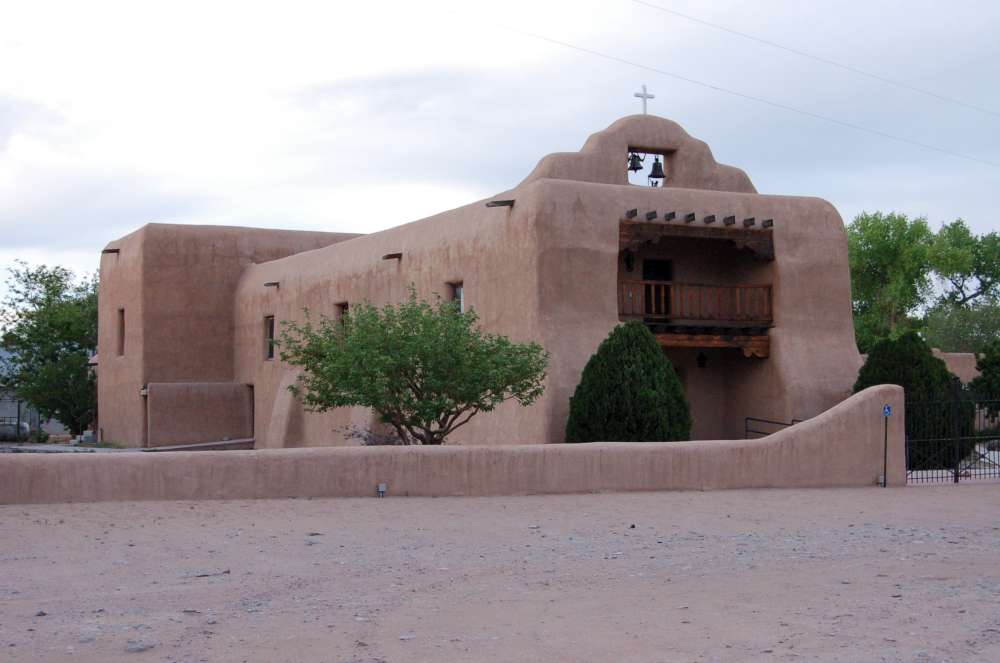 Another historic mission church, located nearby the monastery. 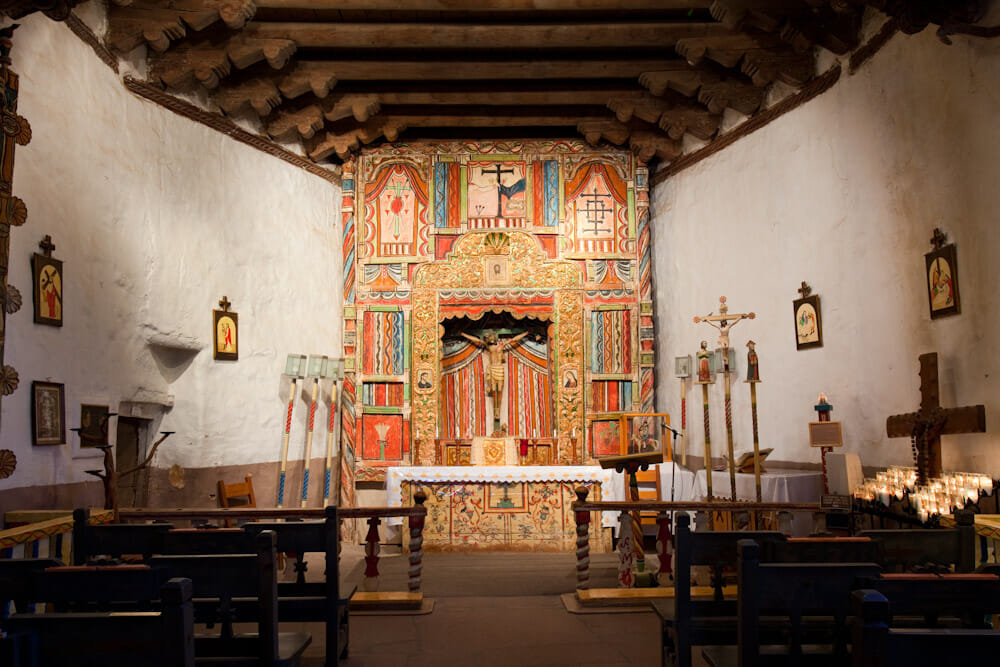