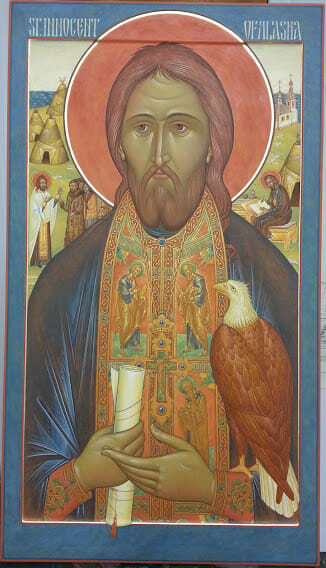 Fr. Silouan Justiniano was born in the Commonwealth of Puerto Rico to non-Orthodox parents. Raised in the Protestant church of which his father was a minister, his family later embraced Orthodoxy here in the United States. Drawn to monastic life, in 2002 Fr. Silouan was tonsured a monk. In 2006 Fr. Silouan was ordained to the priesthood. He has served since that time at the Lord’s altar together with his father, who was also received into holy orders and today serves a mission parish in their native Puerto Rico along with the rest of their family. Exceedingly gifted, and drawn to artistic expression, Fr. Silouan pursued a Bachelor of Fine Arts degree at the School of Visual Arts in New York City, followed immediately by a Master of Fine Arts from Hunter College, of the City University of New York.He describes the training he received here as loosely based on the Bauhaus model, differing from classical forms in its devaluation of traditional drawing and painting methods, and a neglect of medieval and early Renaissance techniques. Yet this education allowed him to hone his skill and develop his artistic abilities. Beginning with foundational training in two-dimensional design (optics, architectural principles, as well as pragmatic, psychological, and emotional approaches to flat-surface expression), and appropriating the language of composition, color, line, form, and value, Fr. Silouan’s schooling in fine art explored also three-dimensional design as well art theory and history, culminating in an intensive preparation for exhibition and artistic success in his chosen medium through seminars, tutorials, presentations, analyses, and faculty scrutiny. All of this served as a kind of propaideia for Fr. Silouan’s later transition into the sacramental world of icons. Fr. Silouan relates that,

For years I had searched for a way of conveying an intimation of the Sacred—a way to express the spiritual in the immanent. I looked at Expressionism, then Symbolism, gradually going from representational painting towards Abstraction, or Non-objective painting. I read Concerning the Spiritual in Art by Kandinsky, and some of the ideas of Malevich and Mondrian fueled my interest in the possibility of painting being able to be transformative, to have spiritual impact. But, in the end, all this so-called spirituality, this yearning for the Absolute, just remained a romantic dream, a workshop of subjective fantasies.

This yearning was ultimately fulfilled, according to Fr. Silouan, in his encounter with the Icon. He remembers seeing an icon for the first time in a postcard depicting the workspace of Ellsworth Kelly. As yet this encounter failed to convey the power and purpose of the icon, set as it was in the context of abstract conceptualism. He describes the inspiration Kelly received from the Gospel’s peculiar shape. For Kelly, says Fr. Silouan, “the icon remained in the realm of an aesthetic curiosity.” It was not until he first attended the Divine Liturgy in an Orthodox Church that Fr. Silouan began to be impressed by the “theurgic” nature of icons. Until then, he confesses, it had been difficult to understand art as anything “more than just a relativistic or individualistic statement—more than just clever aesthetics.” For this reason Fr. Silouan did not find the abandonment of secular painting, a necessary corollary of his entrance into monastic life, to be much of a disappointment. He found in the icon the fulfillment of everything he had longed for in the world of art. It was in fact on the threshold of monasticism that Fr. Silouan first tried his hand at actual iconography. Having moved into the monastery with the intention of examining the life more closely, he was asked by his spiritual father, the abbot, to paint the Plaschanitsa (Epitaphios) for Holy Week. This he did using the more familiar oil-on-canvas technique. It was not until after his investiture as a novice that he painted his first traditional icon, egg-tempera on a gessoed board. Since then Fr. Silouan has worked on many projects. In addition to a number of standard portable icons, the Golgotha of St. Nicholas Cathedral in New York City stands out for him.This was a restoration project that essentially involved repainting the figures from scratch on pre-cut structures: a challenging but rewarding project. 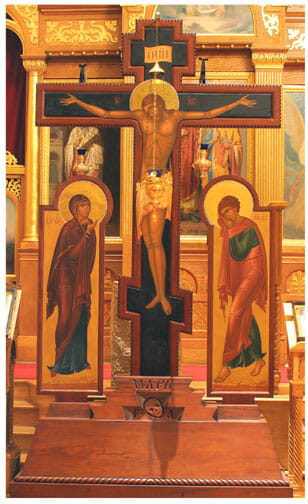 Also memorable for Fr. Silouan were two commissioned Latin saints: St. Martin of Tours and the Venerable Bede. The challenge of depicting Orthodox saints from non-Byzantine and non-Russian prototypes was particularly enjoyable, as it afforded him the opportunity to mine Romanesque, Gothic, and medieval manuscript illuminations, attempting to synthesize various elements of the tradition in a contemporary composition.

Fr. Silouan has recently painted an iconostas for a church in upstate New York dedicated to St. Innocent of Alaska. His largest project to date, it includes three tiers, following the traditional Russian hierarchy: the four main icons below, the twelve feasts above, and the Old Testament Trinity at the top. He has so far enjoyed the challenge of harmonizing the disparate prototypes chosen by his client into a consistent whole, something which, as with the western saints just mentioned, he feels brings out the most original and creative contribution of the iconographer. 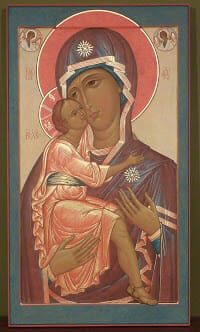 More of Fr. Silouan’s iconography can be viewed here.