A Year of Exploring Ancient Carving Through Drawing 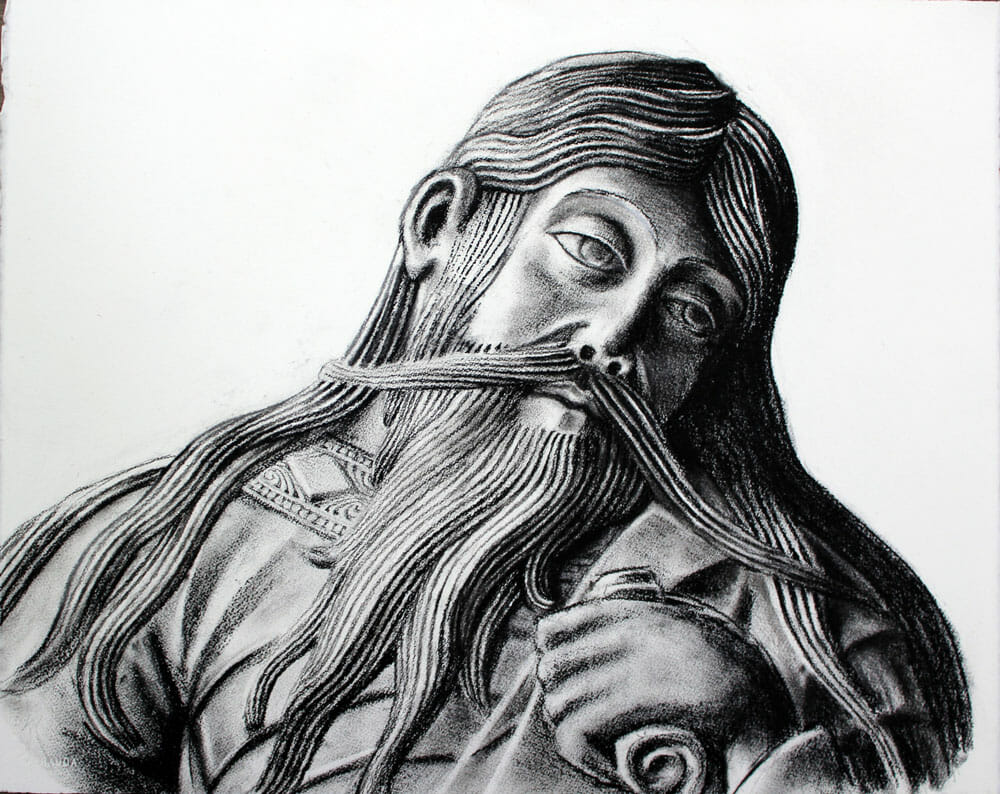 Charcoal drawing of a Romanesque carving of the prophet Isaiah from Moissac, France. 12th century.

For several years already, I had known in my heart and in my hands that I needed to spend more time drawing. Because the art of icon carving had become a lesser vehicle for the traditions of iconography, it seemed pressing for me to spend more time exploring the best examples of relief art and even medieval statuary in order to integrate into my own visual language some of the strongest forms developed by both the East and the West. My hope was to offer the world a more coherent and integrated language of icon carving.

In order to make time for such an endeavor, I started a crowdfunding project last year which I discussed on OAJ in October 2016. Out of this initiative, I was given the chance to explore ancient Christian carving from pre-iconoclastic art to high Byzantine style all the way to Western Romanesque imagery.  I delved a bit into classical art as well, and even left some room for surprises outside the carved form by allowing a few of my patrons to choose the subject of a drawing. 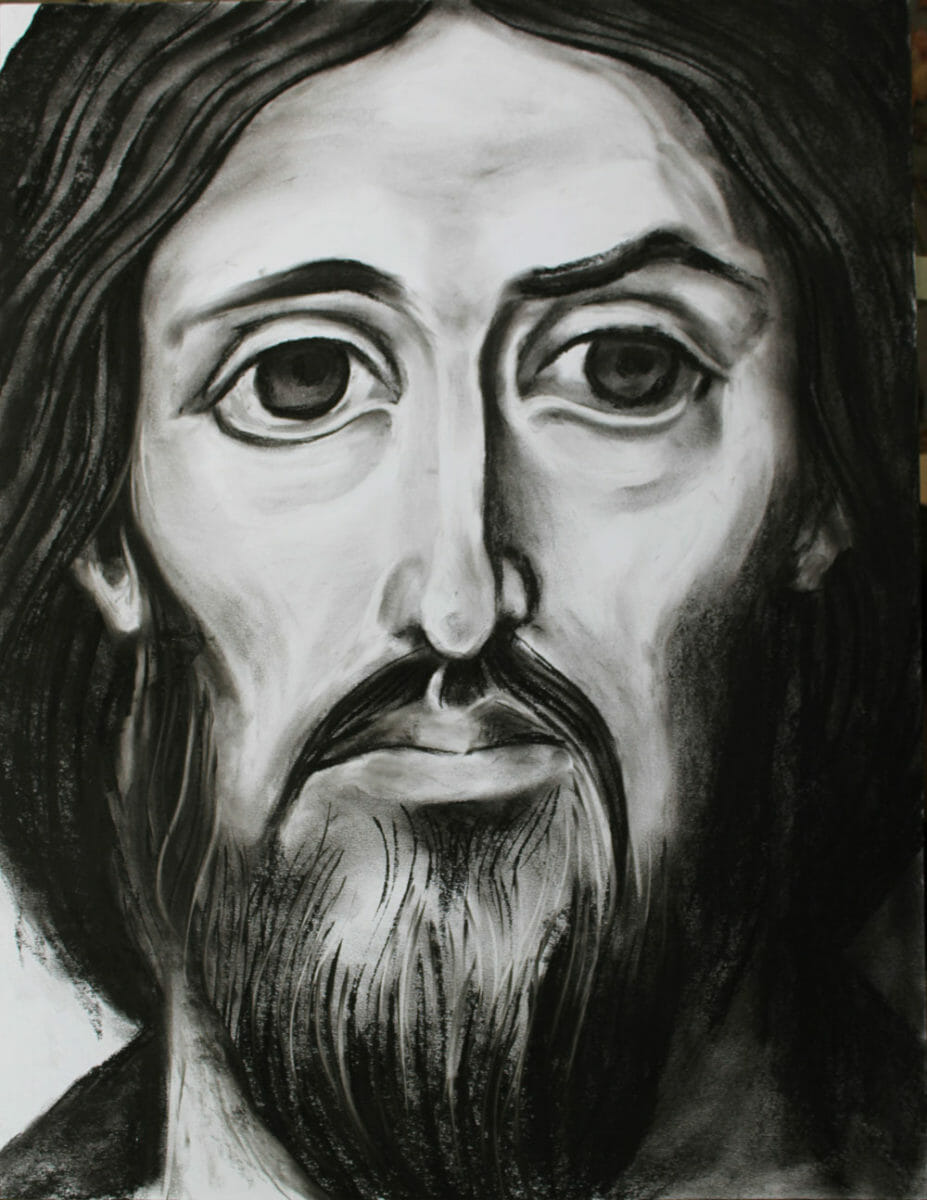 Charcoal on paper drawing of the famous Sinai icon of Christ. I had always promised myself I would not attempt a carving of this image, and to my surprise it was the first drawing requested by a Patron. A video of my process in drawing this image can be found here.

Of course, one of the first avenues I wanted to explore was the rich language of ivory carving, which had flourished so richly immediately after the iconoclastic controversy.  This period of carving demonstrated a synthesis of the classical style with a more sober and hieratic approach to the figure and to clothing.  Many of the cues we recognize in iconography today, both in terms of typology of image and style of representation, were crystalized during this epoch of Byzantine restoration. 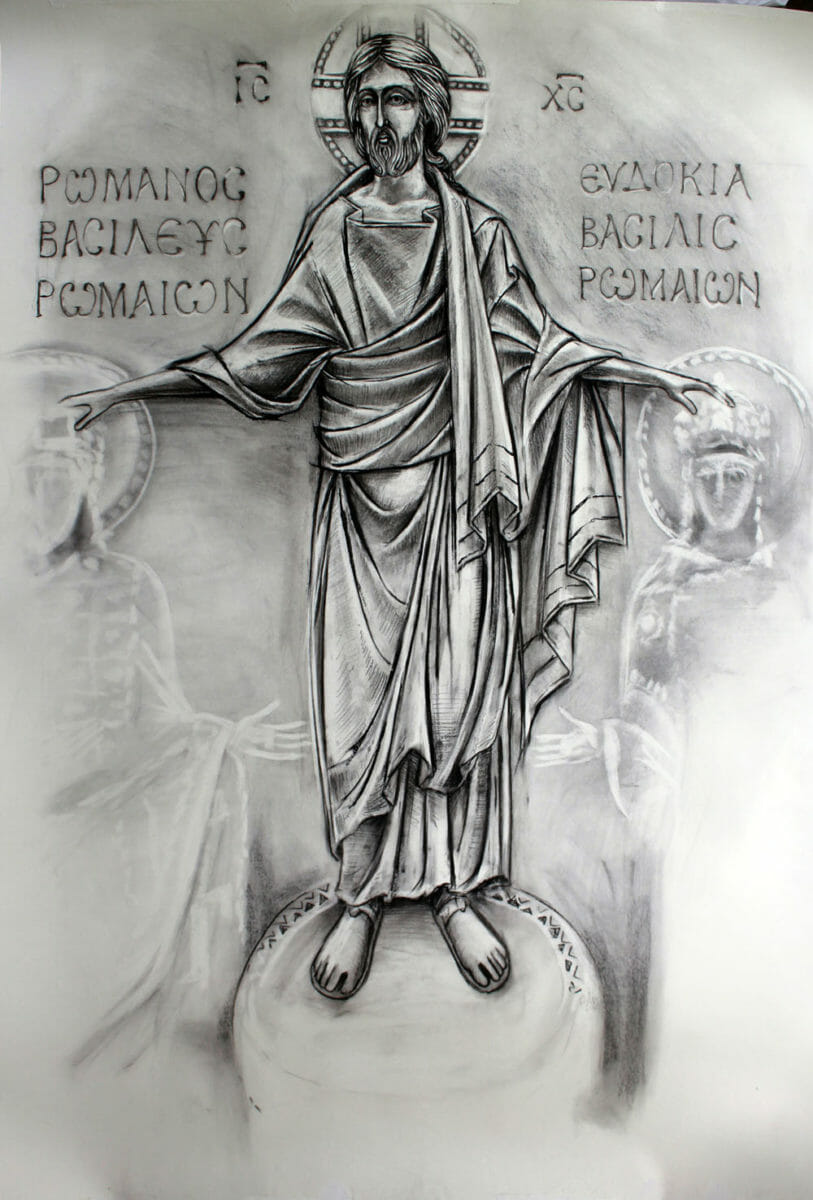 Drawing of Christ blessing Romanos and Eudokia from the 11th century. 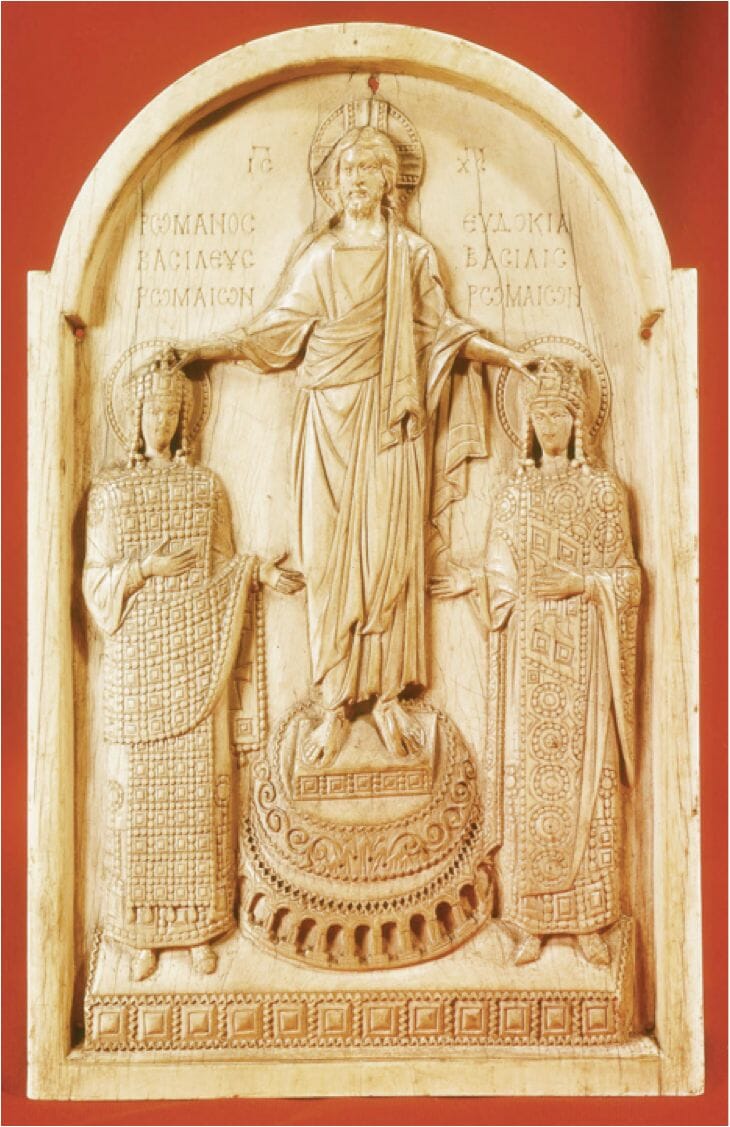 Using the figure of Christ Pantocrator, I moved through different times, areas and even mediums to explore the varitey of strategies in figure and clothing developped through Christian history. 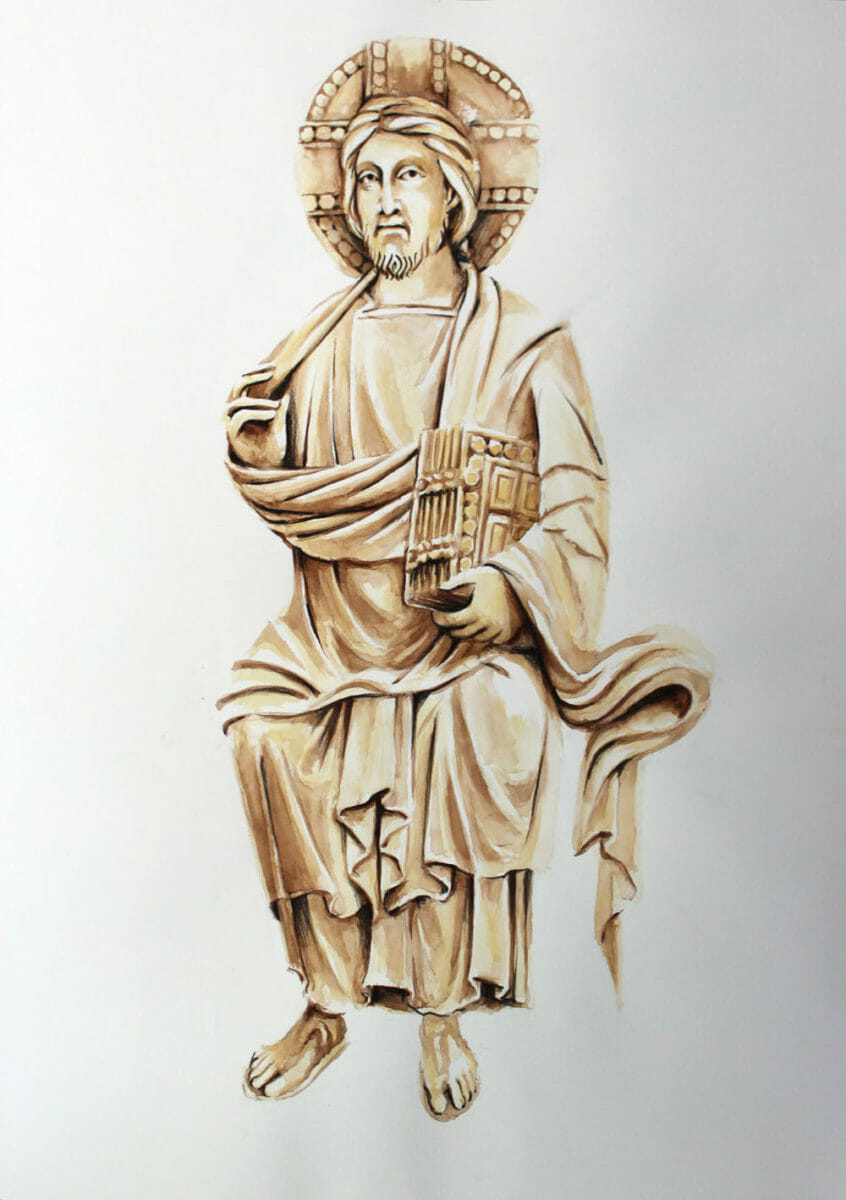 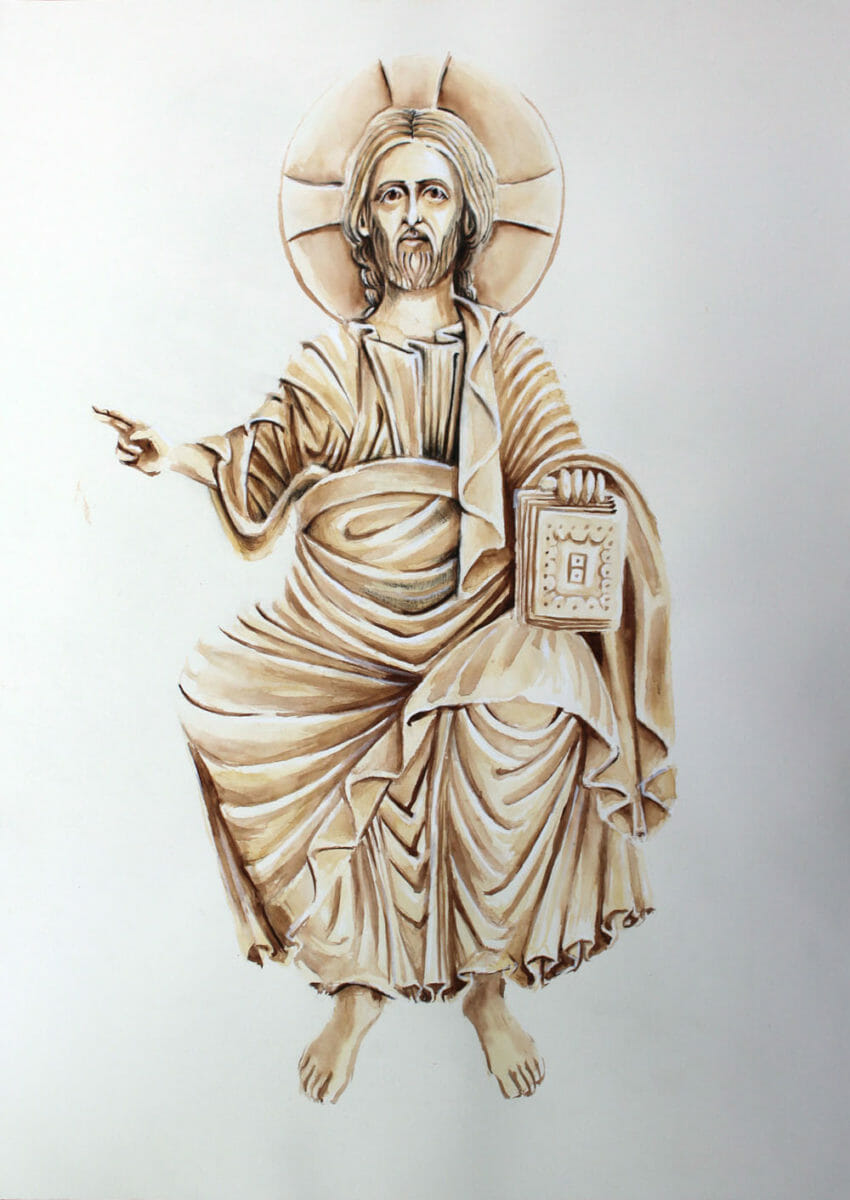 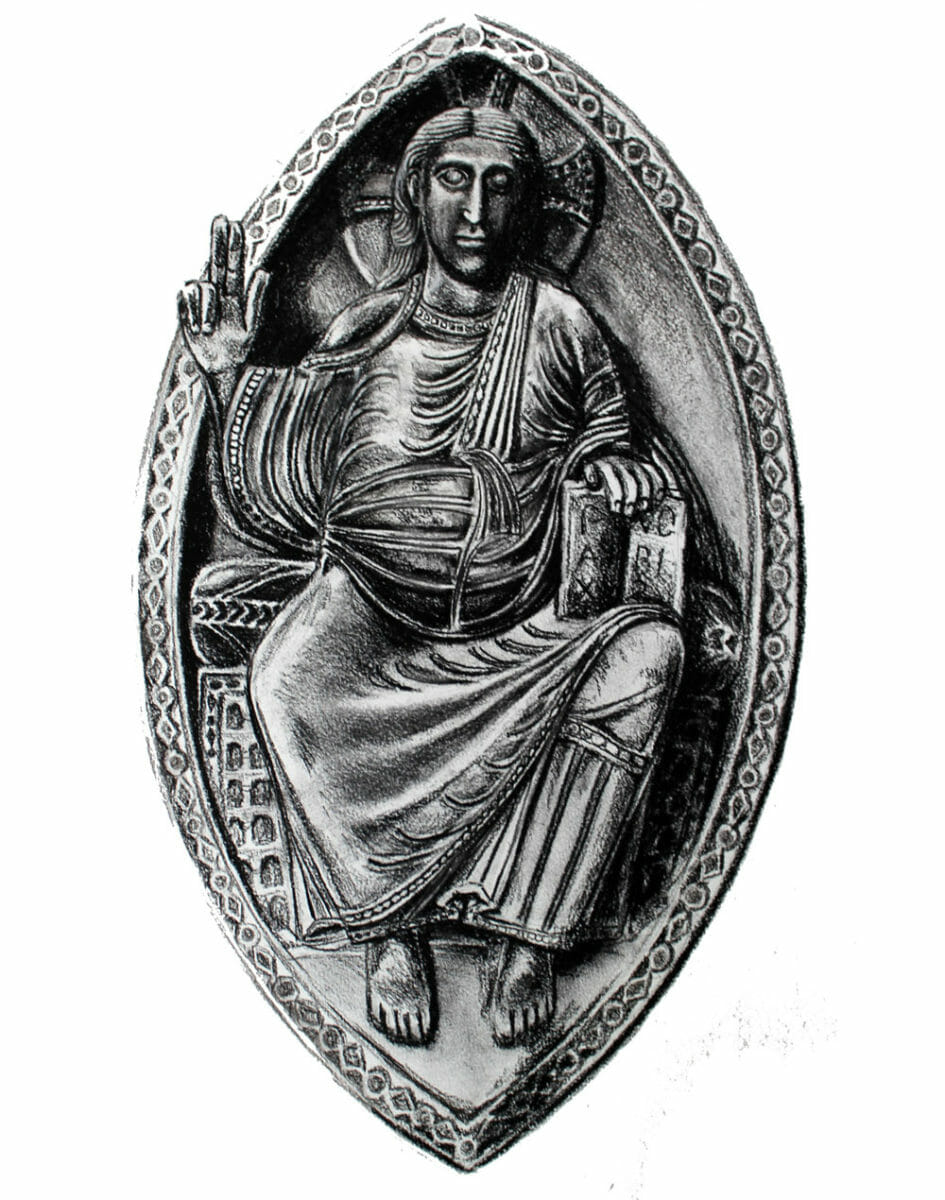 A video of the process of drawing and comparing the Byzantine style to the German style can be found here.

In terms of medium and style of drawing, I decided to take on a more sculptured approach, one which would emphasize relief rather than line, and so it is through watercolor, charcoal and conté crayons, by taking on light and shadow, that I wandered through the mazes left by the ancient masters.  Although I had developped this project as an exercise for myself and with technical goals towards the improvement of icon carving, I was surprised to discover large amounts of joy in the process. I found great pleasure in the act of drawing, a pleasure which I had almost forgotten, having spent the last several years focusing on carving and treating drawing as an intermediary step towards that finished carving.  Differently here, I was able to linger and explore, to build and flesh out my own versions of these traditional images I had grown to love.

The result of all of this was a series of drawings exploring a very wide variety of expression, here focusing on an analysis of clothing, then later focusing on the development of the portrait from the classical period to the iconic expression. 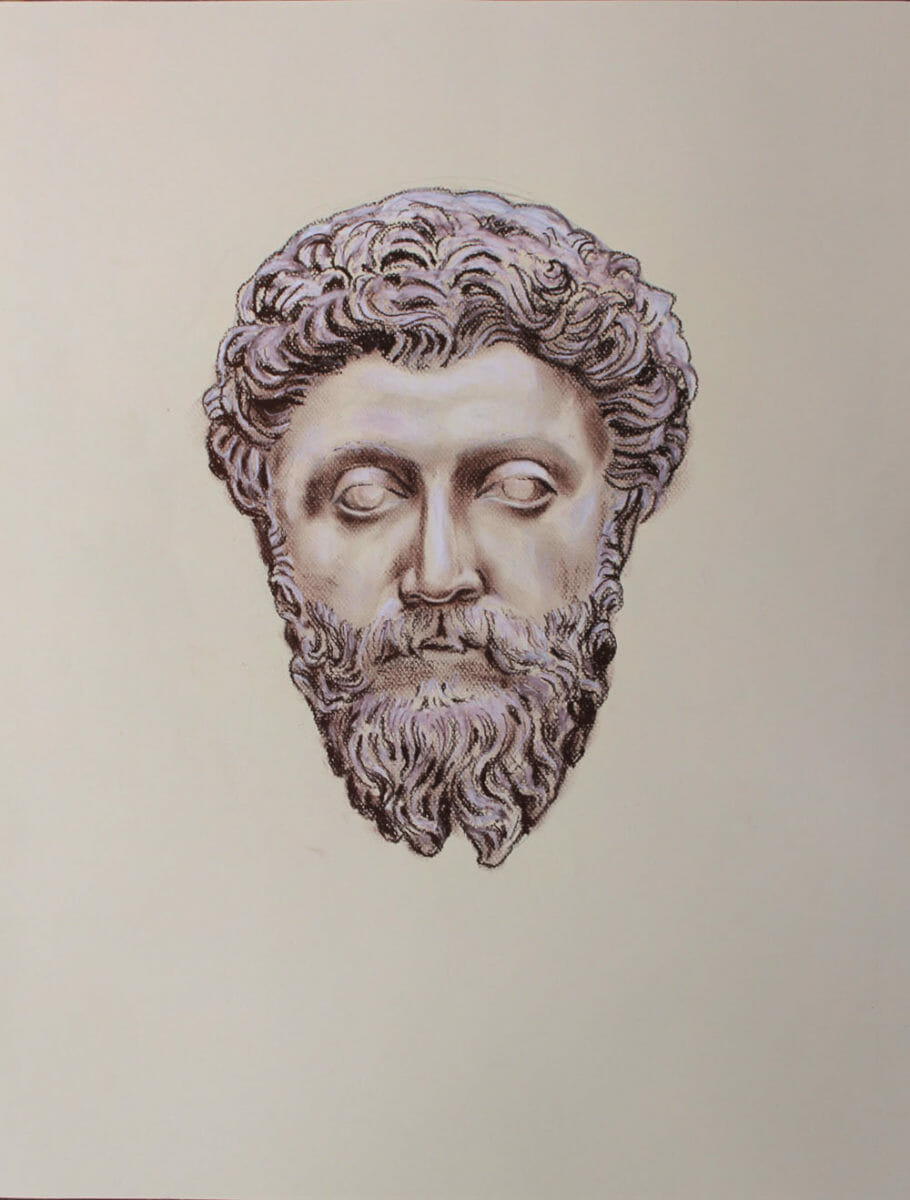 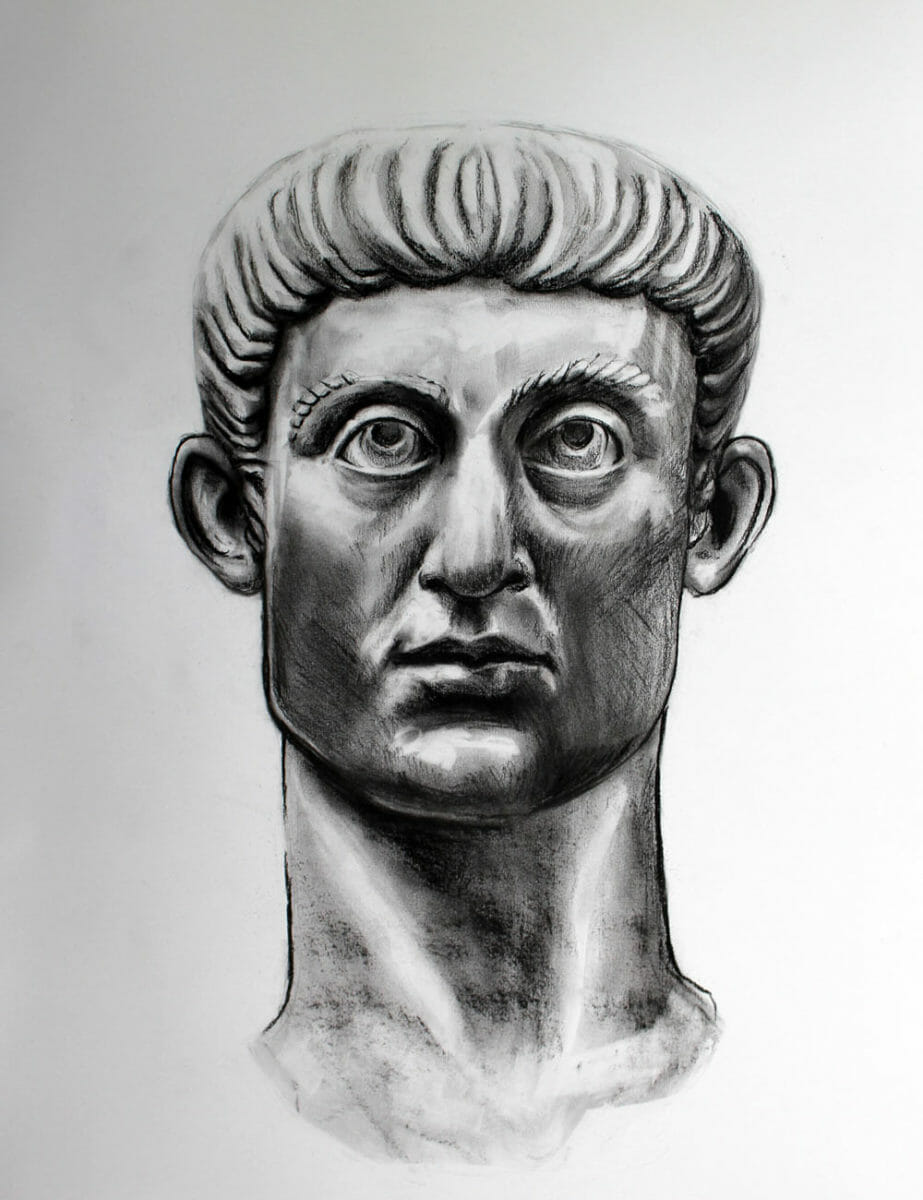 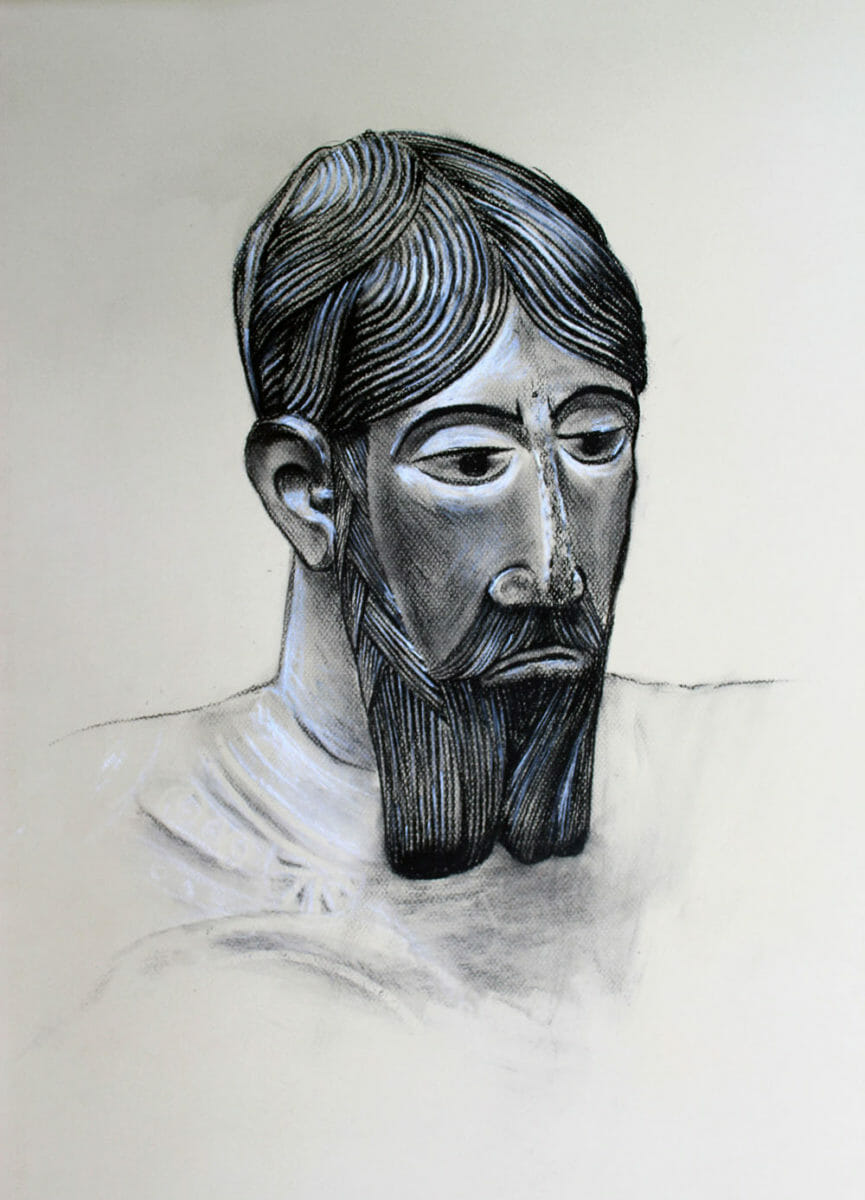 Detail of the Battlo Majesty from 13th century Spain. Charcoal and conté on tonal paper. 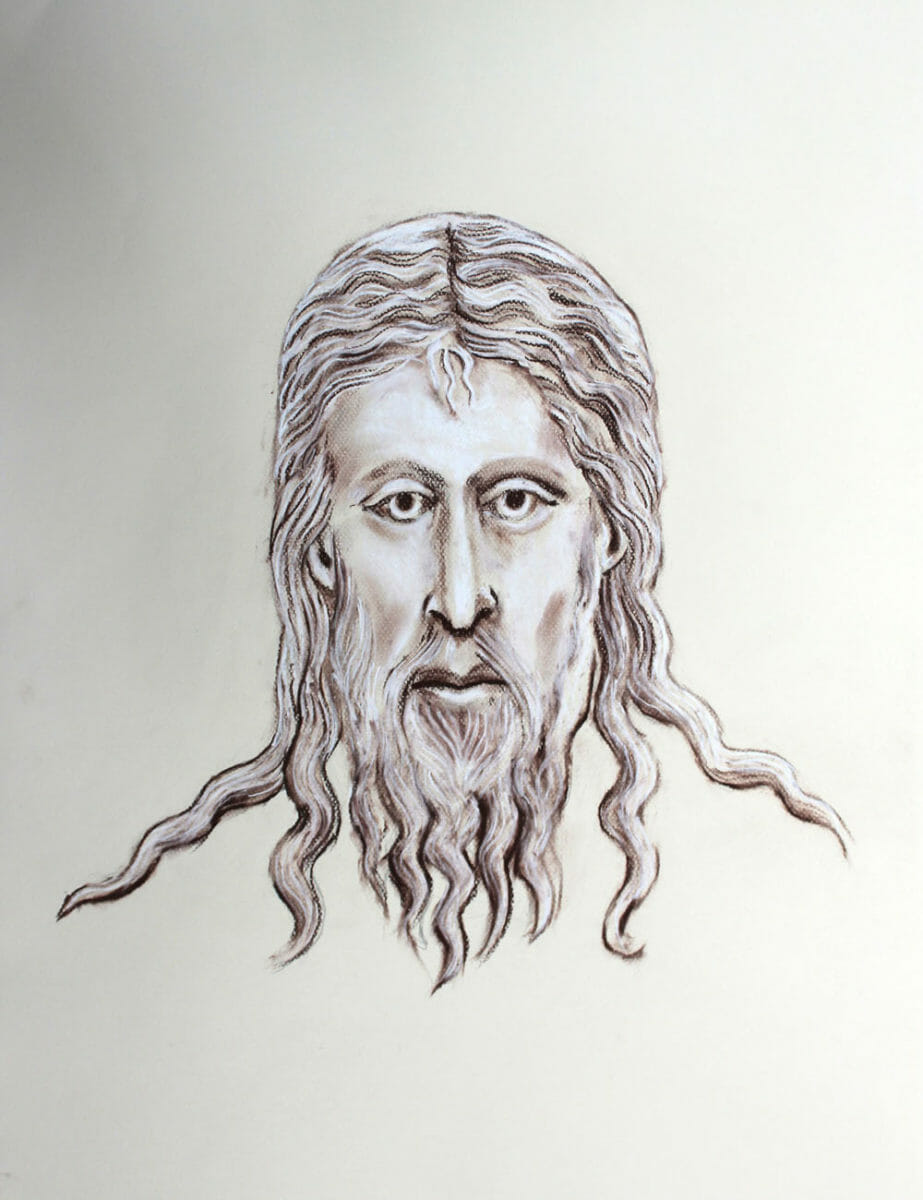 Portrait of St-John Forerunner from a 11th century Byzantine ivory. Sepia and conté.

In November 2017, I finished the first year of the project and sent out one of these drawings to each of the patrons who had donated 25$ or more to the project per month.  For my other patrons, I sent out posters and postcards to thank them for their support.

Because of the deepening in my perception of the carved icon which this has brought about, as well as because of the joy it has brought me, I have decided to continue on this coming year.  There is, after all, so much to explore still in the brilliant images of our Lord and his saints, millenia of love in ivory, wood and stone.

And so to all of those interested in engaging with me as I pursue this adventure, I invite you along for the ride. 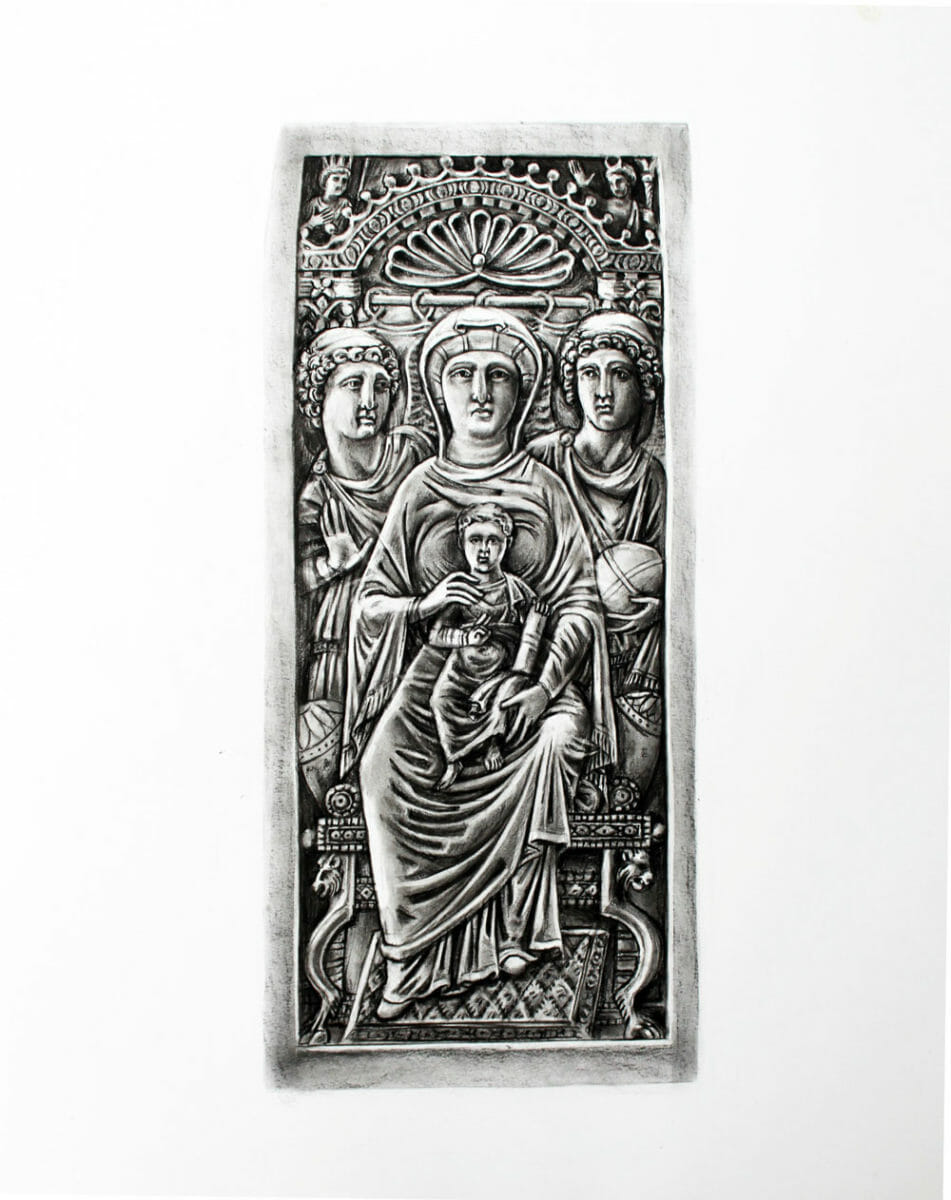 Charcoal drawing based on a 6th century Byzantine ivory from Ravenna. 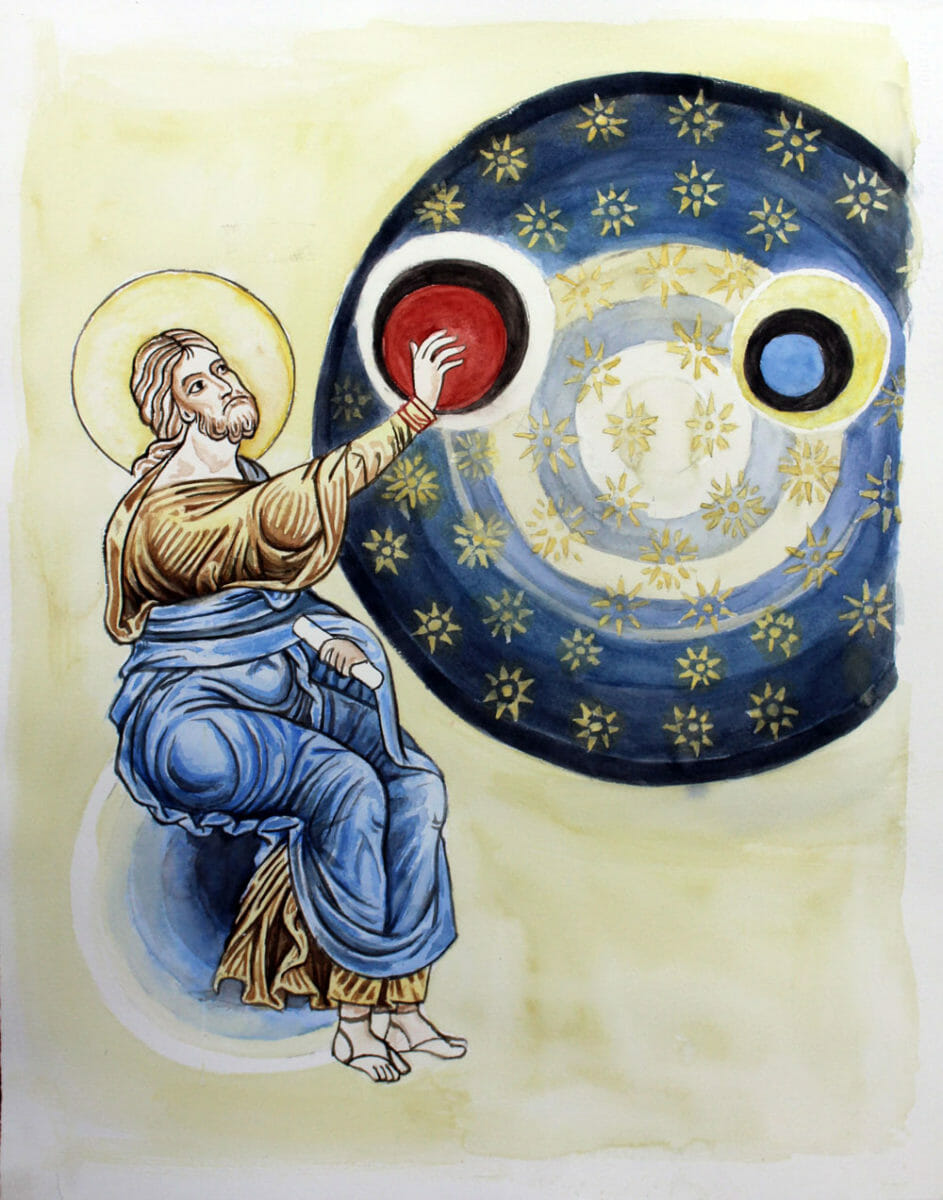 Watercolor based on a 12th century mosaic of Creation from Monreale, Sicily 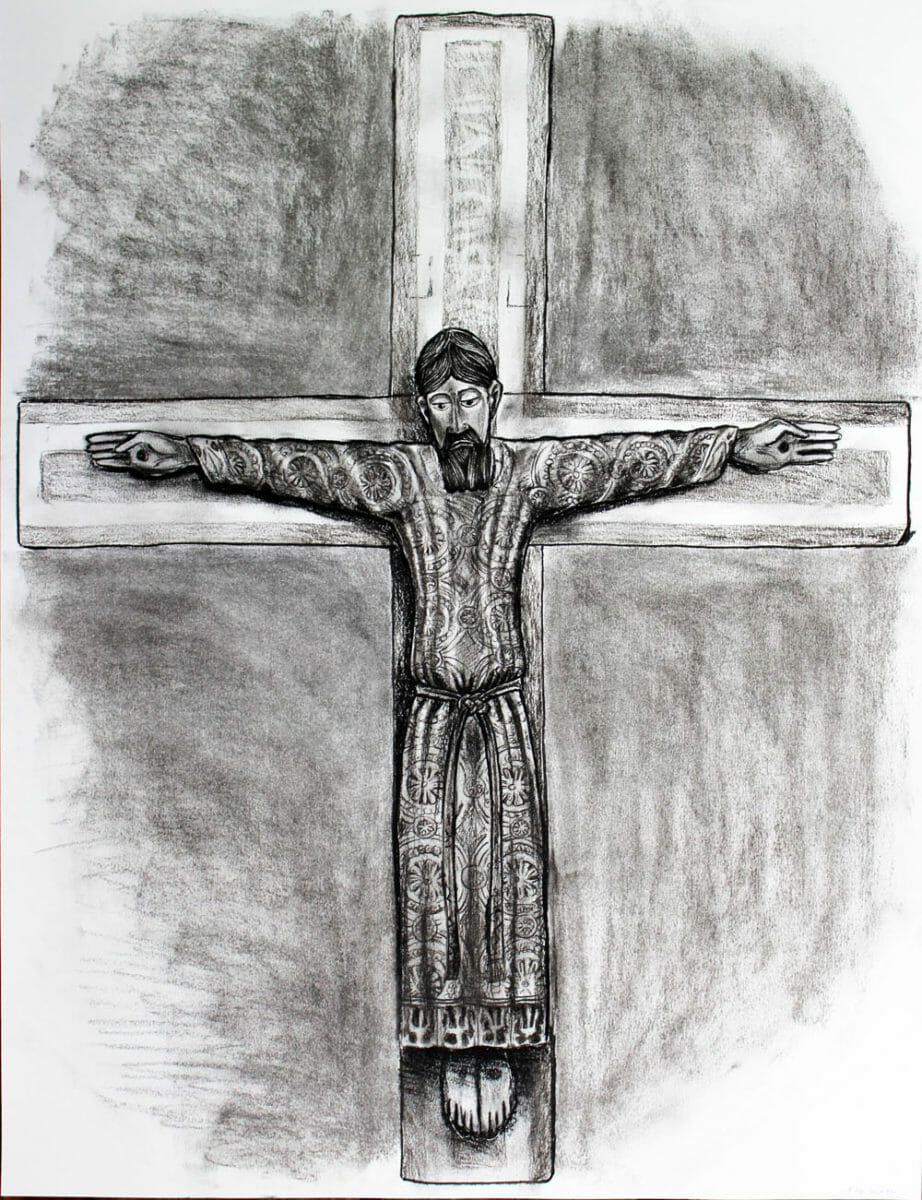 Charcoal drawing based on the Battlo Majest from 12th century Spain.