The Printmaking Tradition on Mount Athos 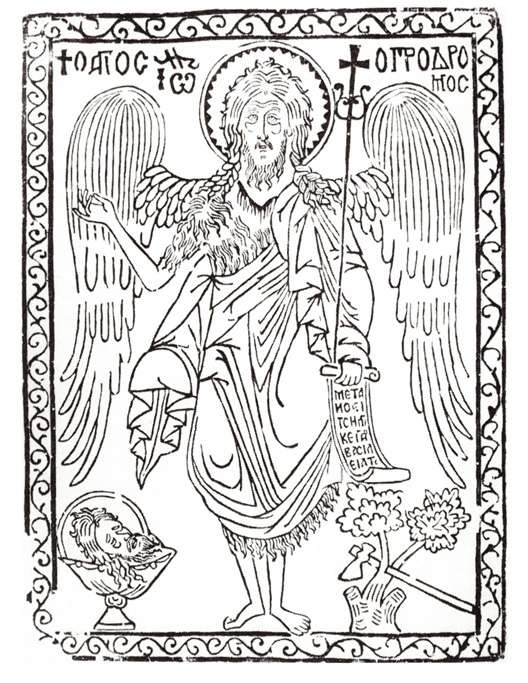 Editor’s note: We would like to introduce our new contributor, Markos Kampanis. Markos is a prominent artist and iconographer in Greece. He has a particular expertise in Athonite murals and prints and will be sharing his knowledge in a series of articles.

Artistic tradition on Mt Athos is usually associated with painted icons and murals. There is however another artistic practice, a more ‘humble’ one, underrated and unknown to most. it is the art of printmaking – mainly copper engravings and a few woodcuts. It is an art that flourished from the 17th c. until the end of the 19th, although some woodcuts may be of an earlier date. (Wood cuts are few, like the very early one depicting Saint John the Forerunner, from Dionysiou monastery – Photo 1)  Prints are of significant importance to Athonite history, but also to contemporary Greek art history. Let us only mention that the first teacher of engraving in the school of Fine Arts in Athens (1843-1865), was an Athonite engraver, the monk Agathaggelos Triantafyllou. This tradition came gradually to an end with the introduction of lithography. Later on modern offset printing gave the final blow to the engraving tradition on Mt. Athos.

Religious Orthodox engravings often constituted the prayer icons for poor people, or of those unable to commission a hand painted icon; they have been justly called “paper icons”. There are still some examples of using such a print in a chapel iconostasis or private houses (photo 2). Some of the printed images where sometimes hand-coloured to add a more appealing character to them. Moreover, they proved to be a very successful means of connecting and relating the monastic institutions to a large number of people; they were offered as “blessings” to visitors and were also used in an effort to convince people to undertake a pilgrimage and to contribute financially during a period under Ottoman rule when the financing of monasteries was scarce. Print making proved the perfect means for such purposes, it was easy and cheap to execute and in a fairly short time hundreds of copies were available. Additionally, original prints such as these provide an answer to the justly put question regarding the essence of the mechanically produced reproductions of icons, on which many Orthodox people and churches rely on nowadays. Some of the ambiguities regarding such images have already been discussed in this journal in a 2013 article by Fr. Silouan Justiniano, “The Icon’s Materiality and Mechanical Reproduction”. The Athonite engravings are still original works that require craftsmanship and their man-made character is evident as is their materiality – characteristics that are vital for a true icon. 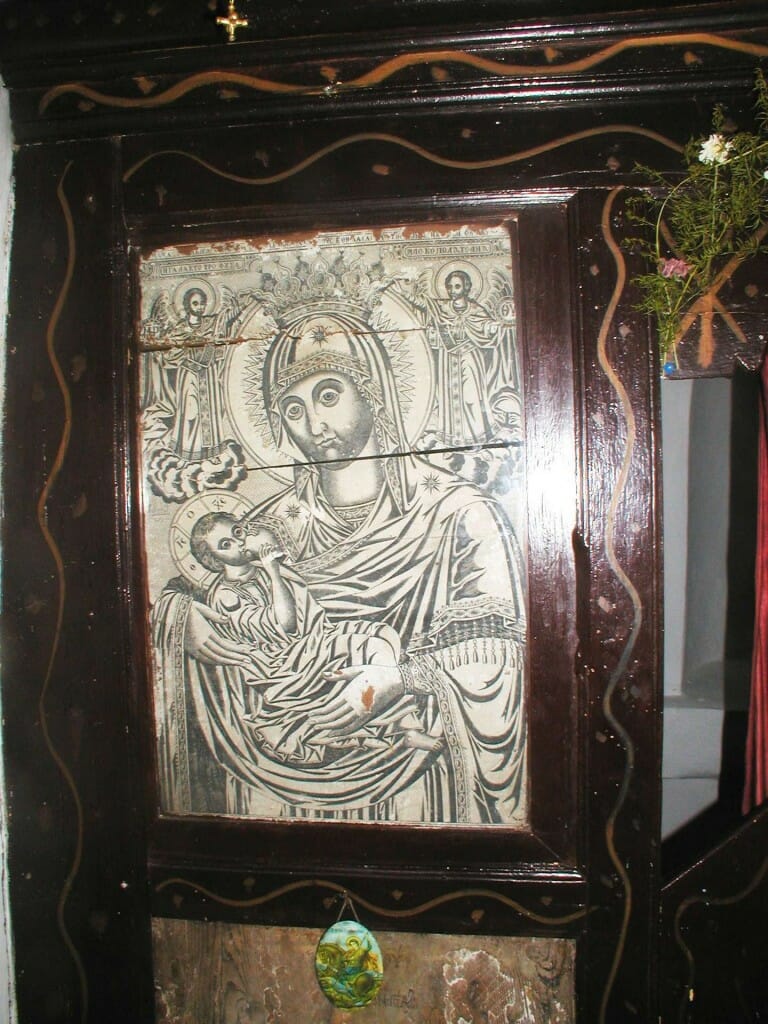 2. Iconostasis in a small chapel using a print as an icon.

We know that the first engravings associated with Mount Athos were engraved and printed in important European cities (Moscow, Venice, Vienna, Livorno, etc.) that had strong Greek or Orthodox communities. Gradually Athonite workshops took over most of this production. It is natural that some of the first ‘western’ Athonite prints were in a style characterized by naturalism – by the use of perspective and generally by aesthetic values that Orthodox communities in Greece, and Mount Athos in particular, were not accustomed to. However, they were still welcomed and used for veneration or to promote and advertise the monasteries to pilgrims. When Athonite print workshops had the lead, especially around the capital Karyes, a characteristic style gradually developed: an Athonite style of printmaking that stands between a western (sometimes Baroque) aesthetic and Byzantine/post-Byzantine iconographic style. The first images were based on Western prints, but the other way round was also true: prints produced in Vienna or Venice for Mount Athos where based on ideas or earlier prints that came from the Holy Mountain. Even when Athonite workshops where well established, some monasteries did not hesitate to commission a new print from a European workshop for practical purposes. That means that they were willing to associate themselves with both western and Byzantine aesthetics. I believe that this attitude proves that they were open to contemporary ideas and this is very much in accordance with the style we see in painted icons and murals of the 18th and 19th centuries.

Regarding subject matter the prints were either landscape depictions of Mount Athos and specific monasteries, as well as religious images of saints and orthodox feasts, or a combination of both.

A very interesting and visually innovative group of prints is the one depicting the whole of the Athonite peninsula, by placing the two sides of Mt Athos next to each other, as if it were a two peaked mountain (Dikorfon = Two peaked). 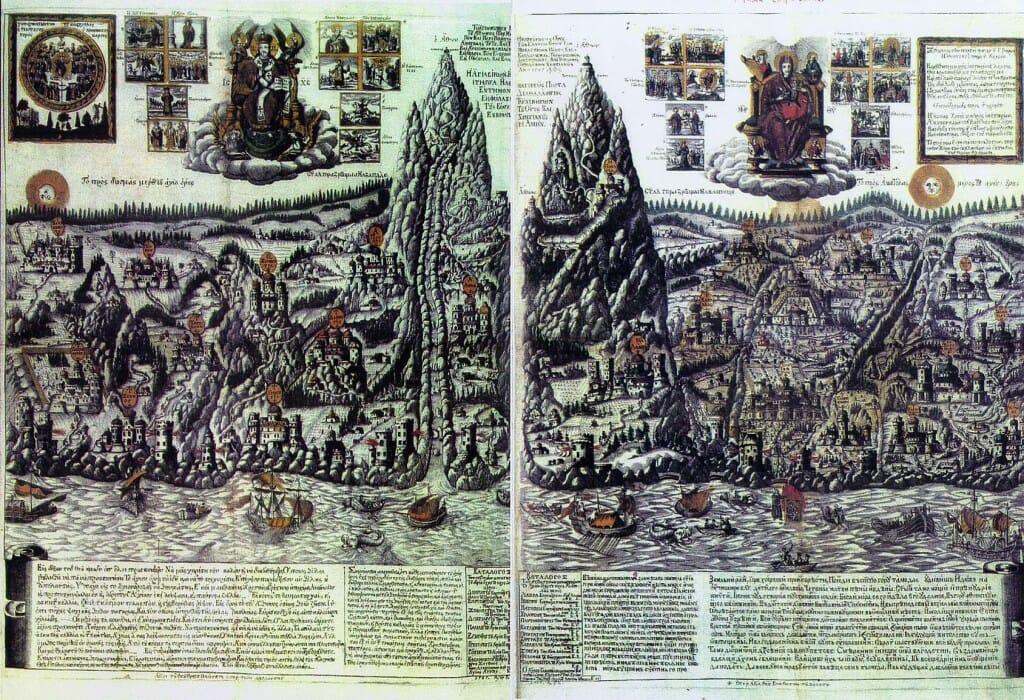 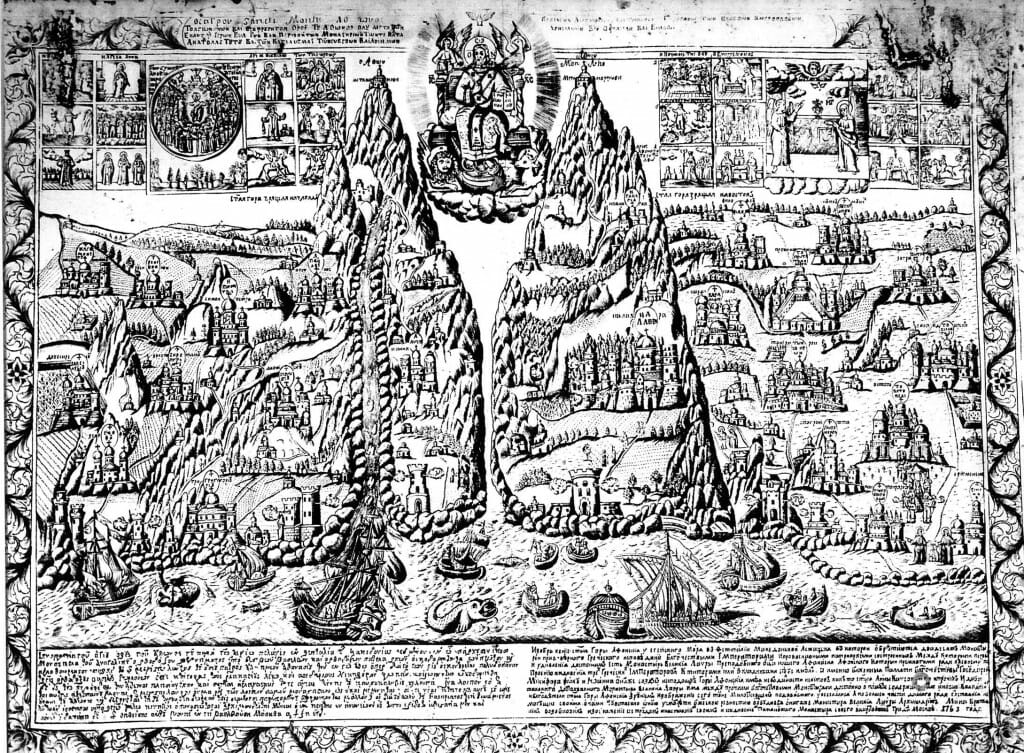 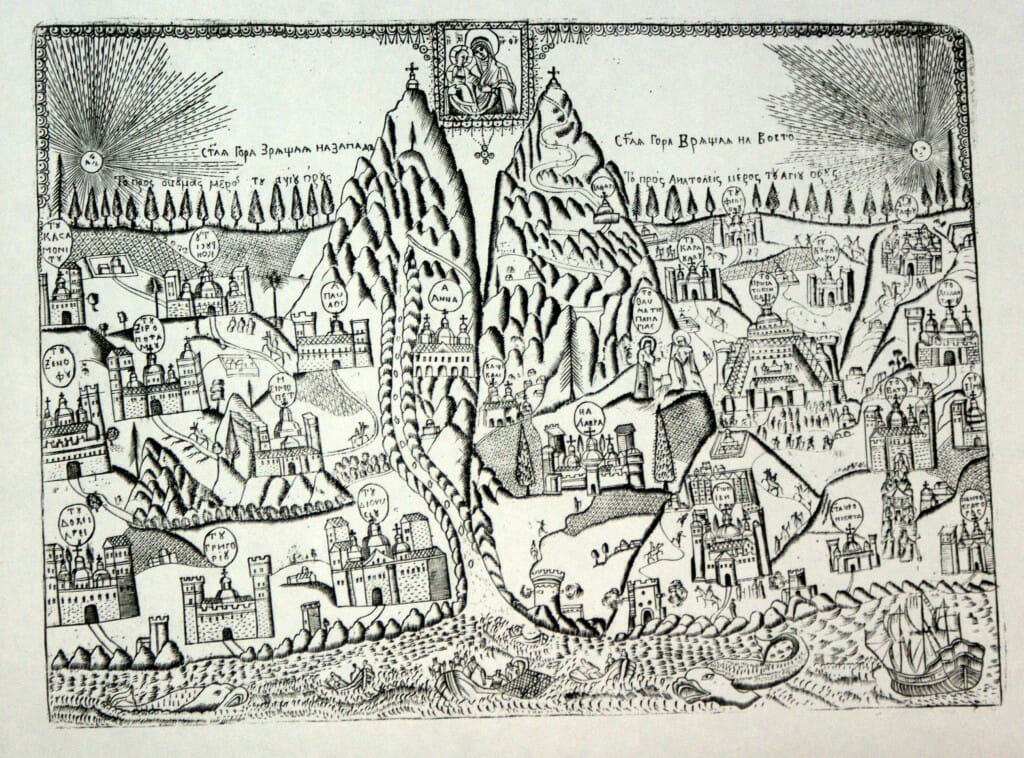 The first images of this kind were engraved and printed in Western Europe (ph. 3, 4). The Venice 1713 engraving is an exceptionally fine work using western iconographic material giving a certain Renaissance feel to the Athonite landscape. Similar images engraved on Athos itself started gradually adhering to more Byzantine or post-Byzantine ways of rendering, with the elimination of the dimension of depth and perspective, and often with an absolutely simplified, almost naïve, vision of the landscape as seen in ph.5. This is one of the earliest examples of such an image, probably around 1770, that could well be the earliest engraved plate coming from Athos. It is interesting, however that this Athonite style reminds us of much earlier Athos ‘maps’, and especially the Komnenos Proskynetarion (pilgrim’s guide) of 1701 held at the British Library. (ph.7) 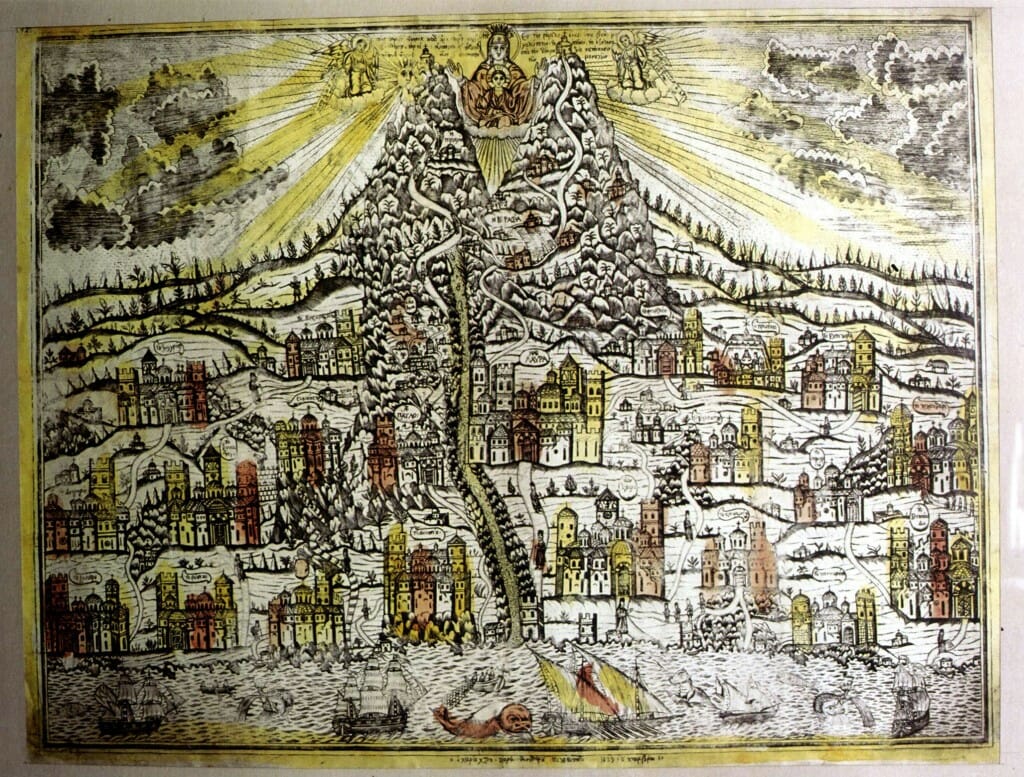 7. Page from the Komnenos Proskynetarion.

Prints depicting specific monasteries usually represent the main compound with the surrounding area (including chapels, the port, workshops, etc.) and the saints relating to the monastery. Two images of Vatopedi (ph.8, 9) and two of Dionysiou (ph.10, 11) are all engraved outside Athos. Although they may have been based on descriptions or drawings provided by the monasteries themselves, they still rely on a more naturalistic representational approach if compared to purely Athonite prints, like the images of Gregoriou (ph.12), the monastery of Simonopetra (ph.13 and 14) or the one of Karakallou (ph.15)  that are characterized by simplicity and boldness of execution. 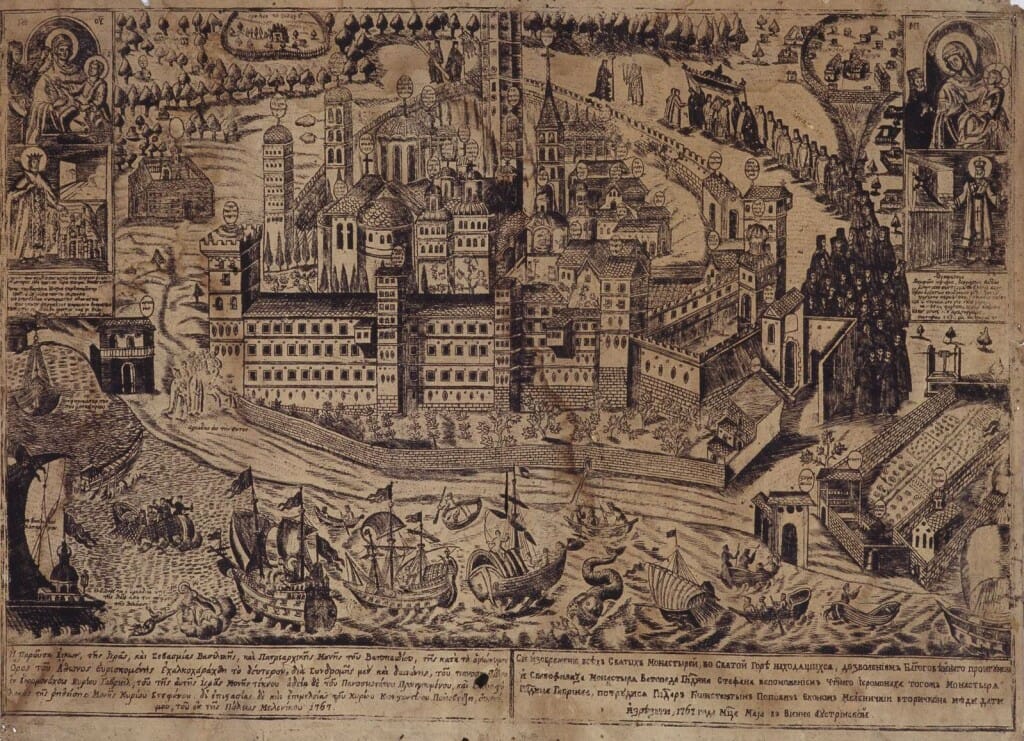 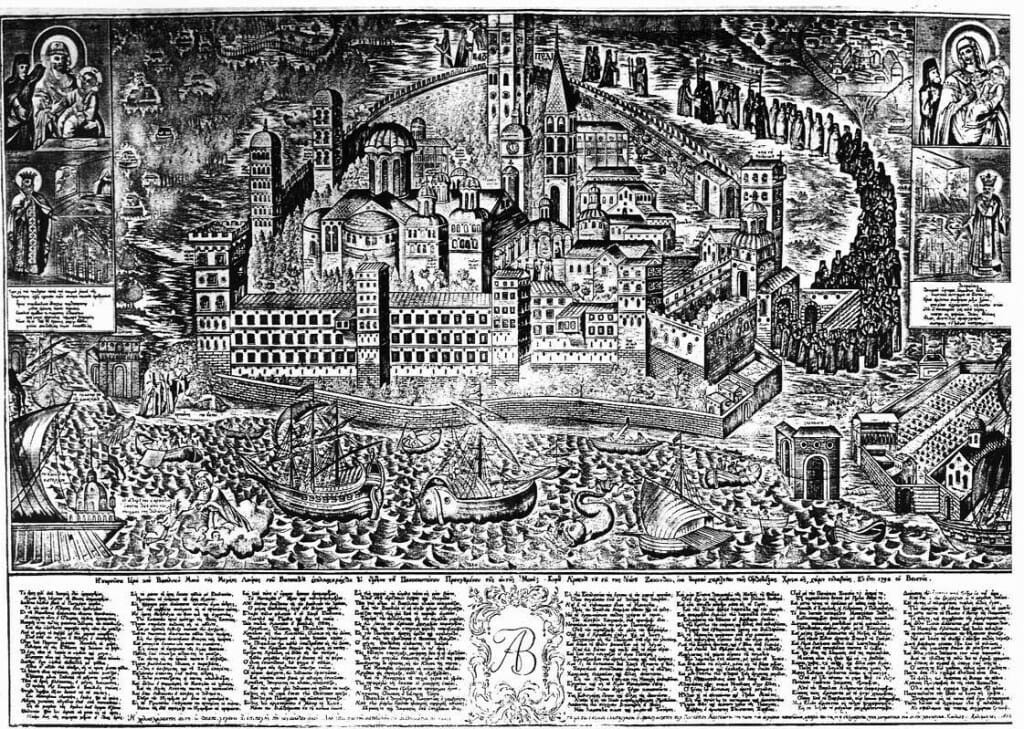 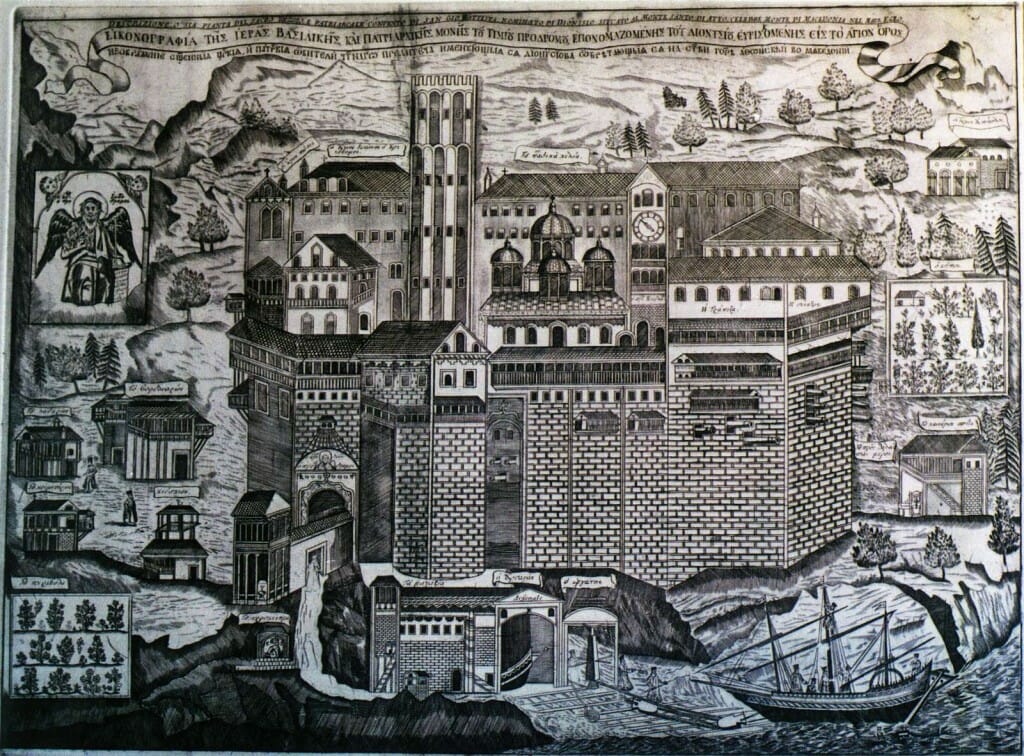 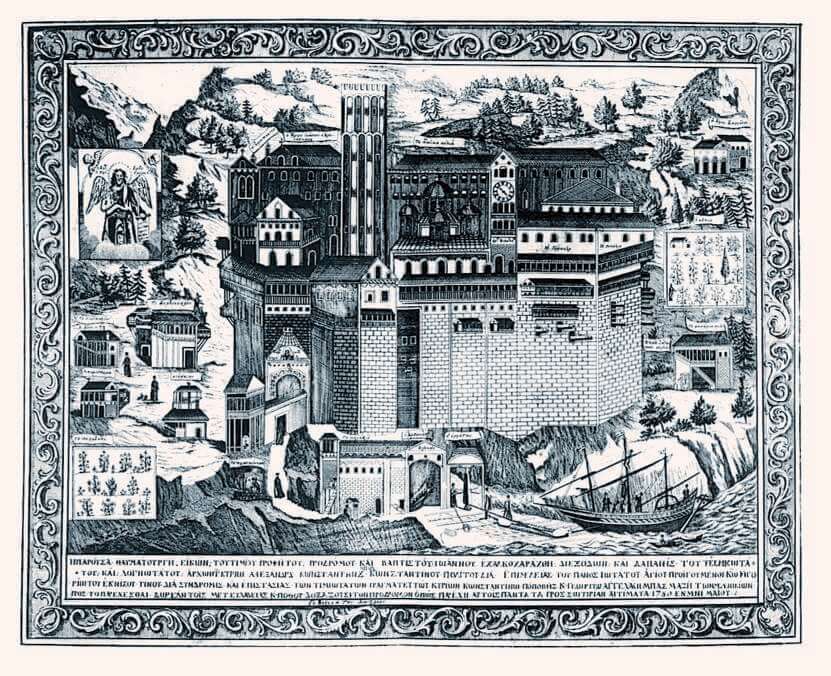 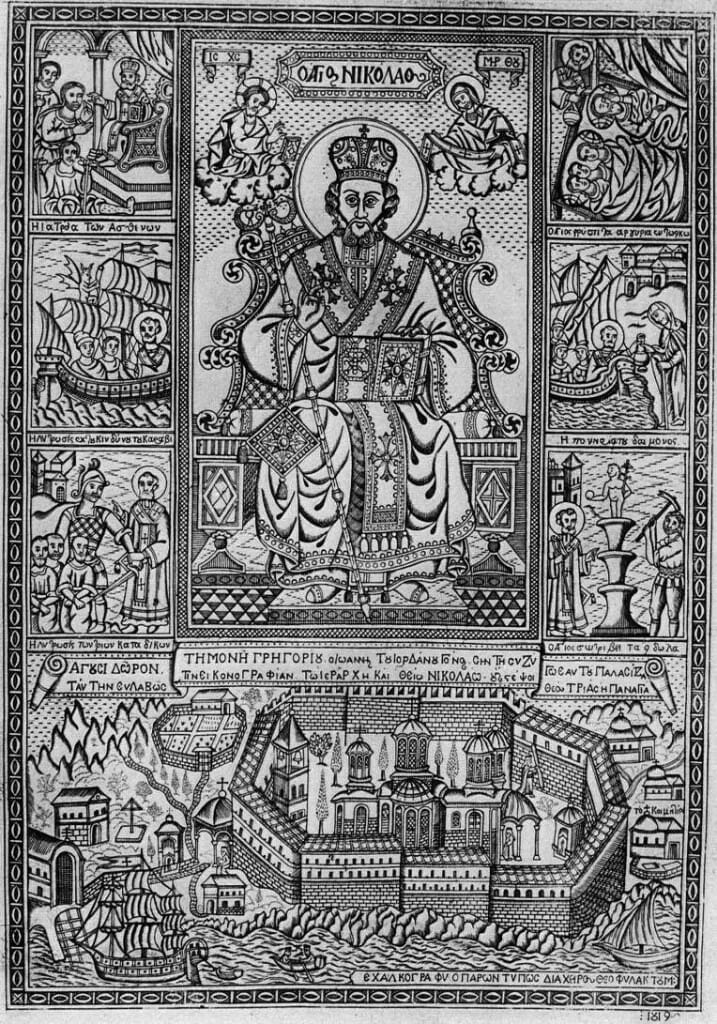 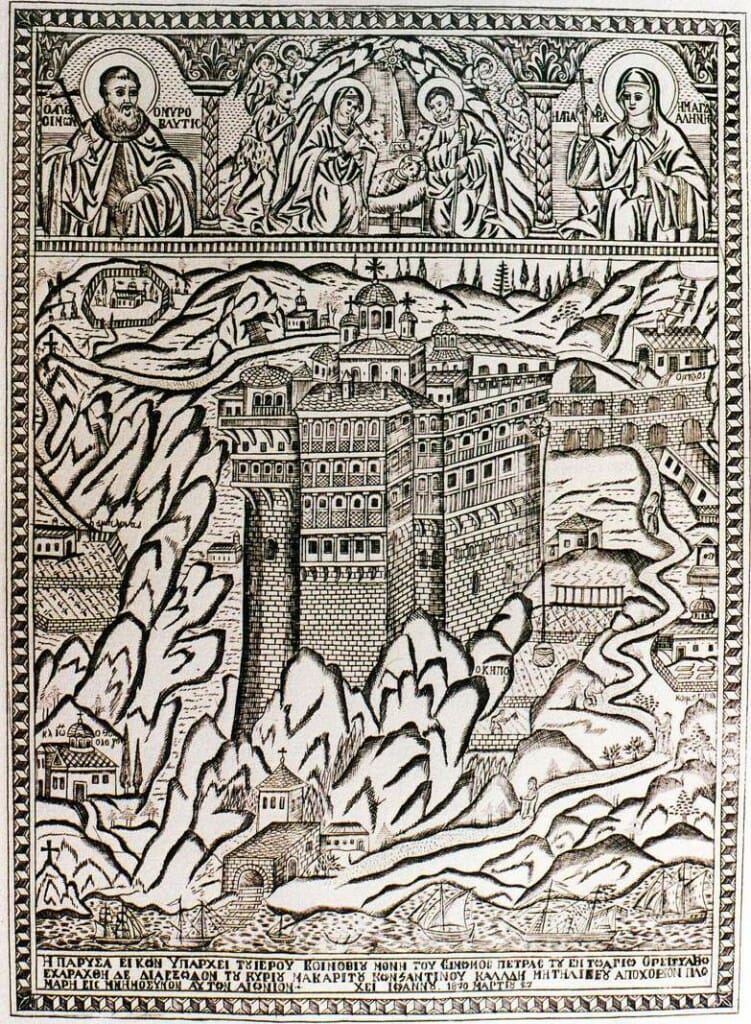 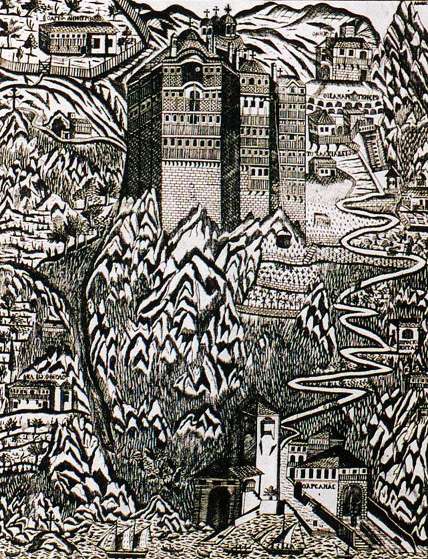 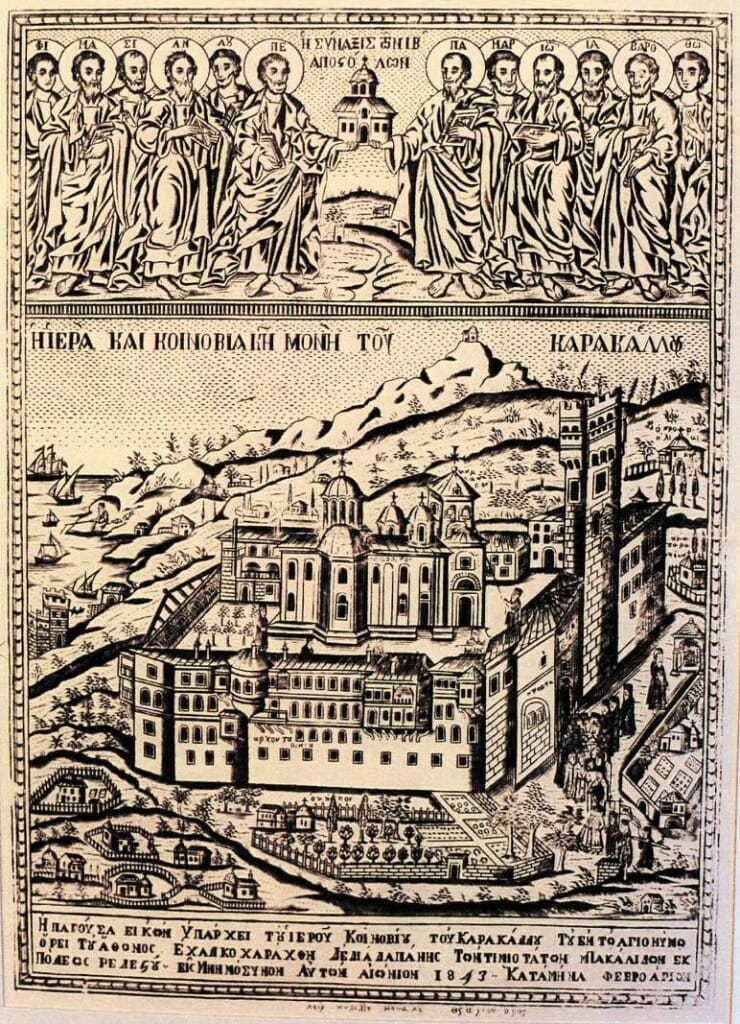 Filotheou monastery is depicted in three engravings, one made in Moscow in 1849, another one of Athonite origin in 1847, and an early purely folk one in a naive style that was, nevertheless, printed in Vienna in 1765. (ph.16). The 1847 Athonite print probably provided the source for the next engraving in 1849 that was commissioned to a Moscow artist that obviously worked in a very naturalistic style as can be seen from the detail on ph.17. 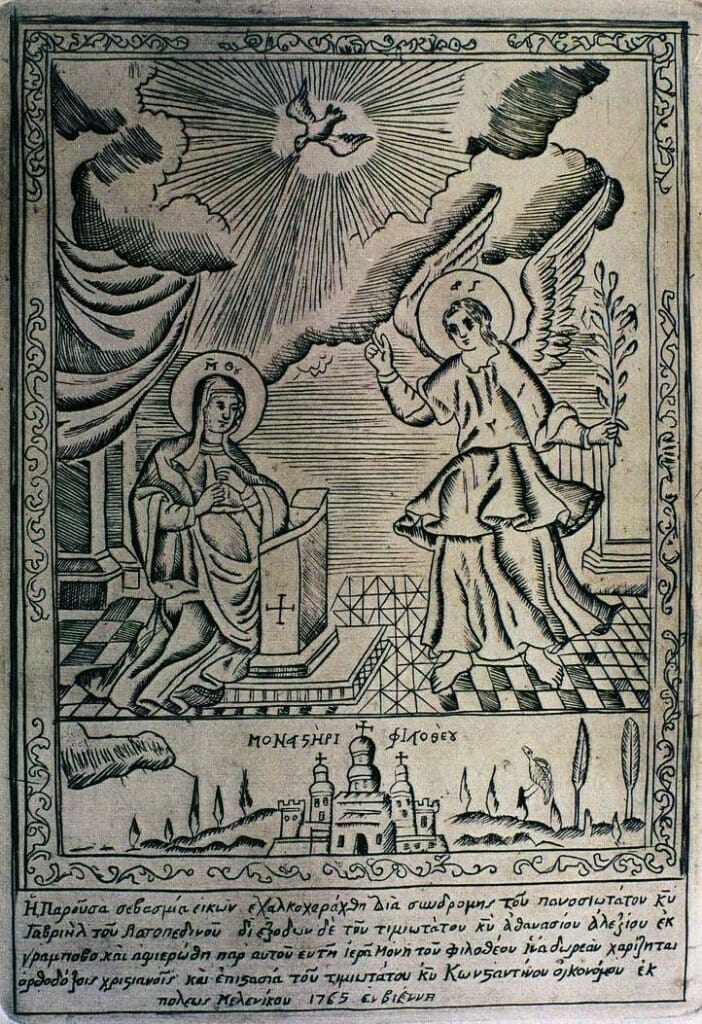 16. Filotheou monastery with the Annunciation, Vienna, 1765. 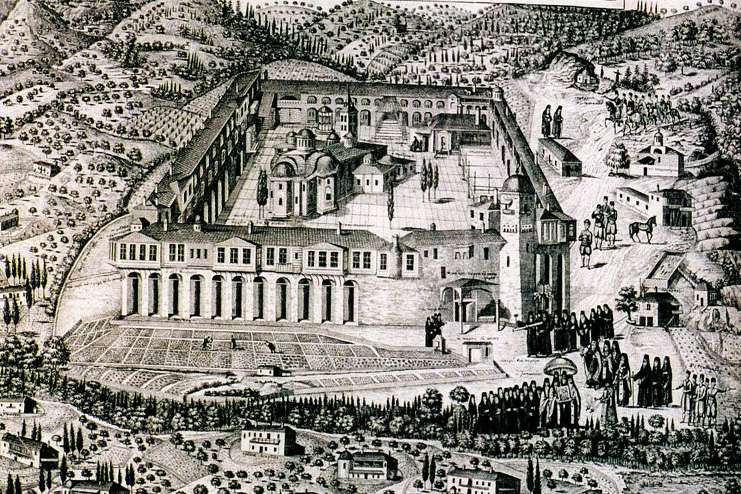 The next important group of prints, the ones depicting saints or religious scenes, are mostly pure Athonite productions, but still in certain cases comparisons with the few prints engraved in Europe may prove interesting. St George prints provide a good example. The one printed in Livorno (ph.18), in a clearly western manner, may be compared to the Athonite one with still strong western influences (ph.19) and to the purely Athonite works like the one on ph.20. 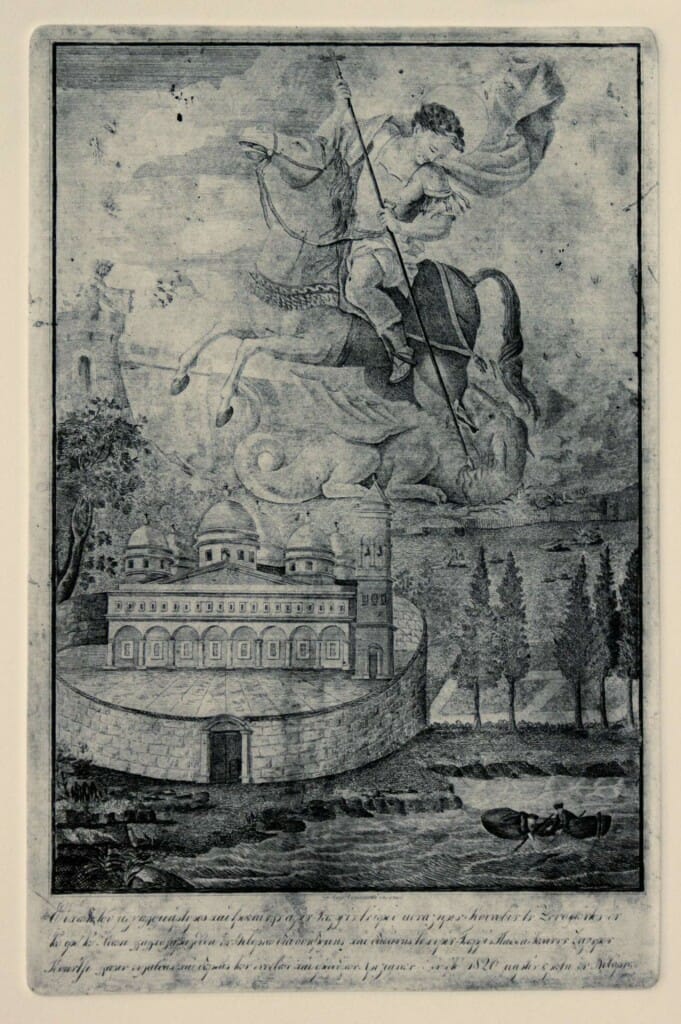 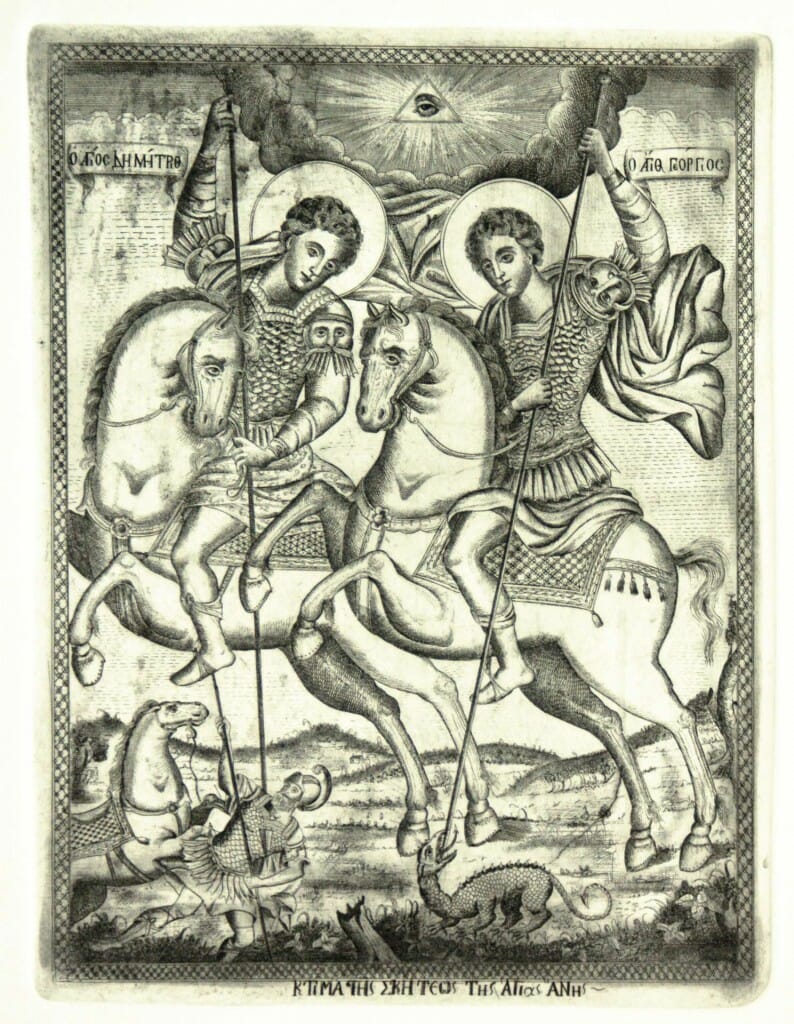 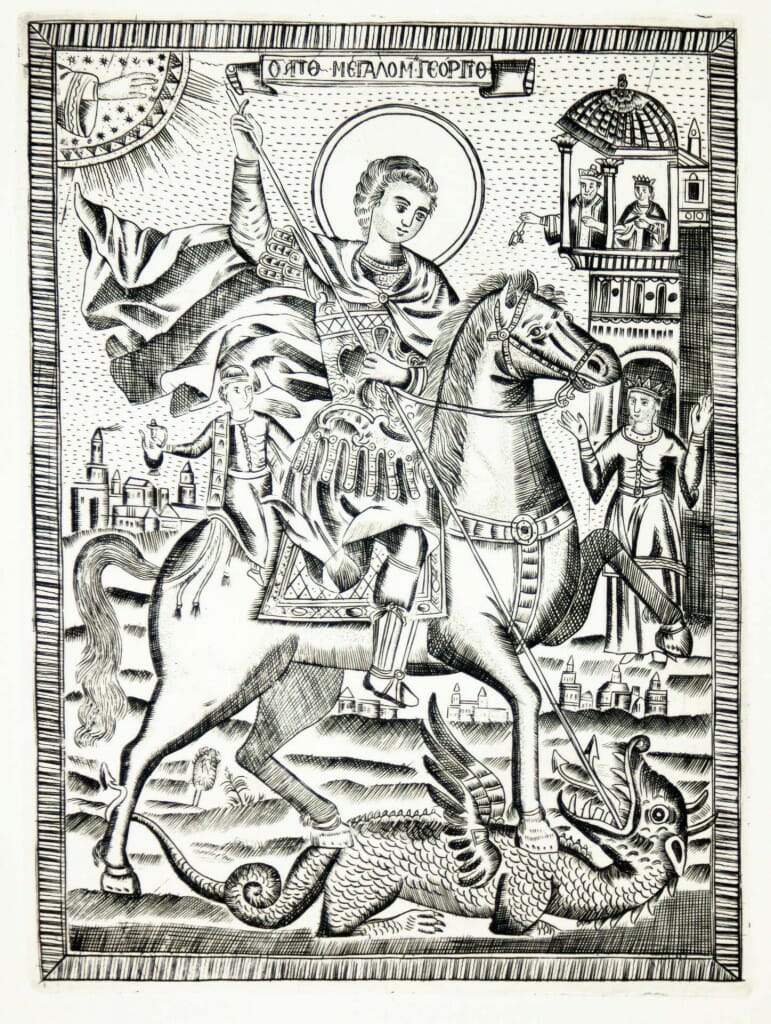 This small selection of images showing the different depiction styles of the same subject testify to the variety characterizing Athonite prints and demonstrates clearly one of the characteristics of post-Byzantine 18th and 19th c. religious art also evident in icon painting and murals of the same period. That is the playful swinging between a naturalistic westernized style and a more Byzantine looking one, which has started turning towards the naïf.

A great number of the orthodox saints and most of the major feasts have all been engraved as paper icons, sometimes as dual images (photos 21, 22, 23, 24) 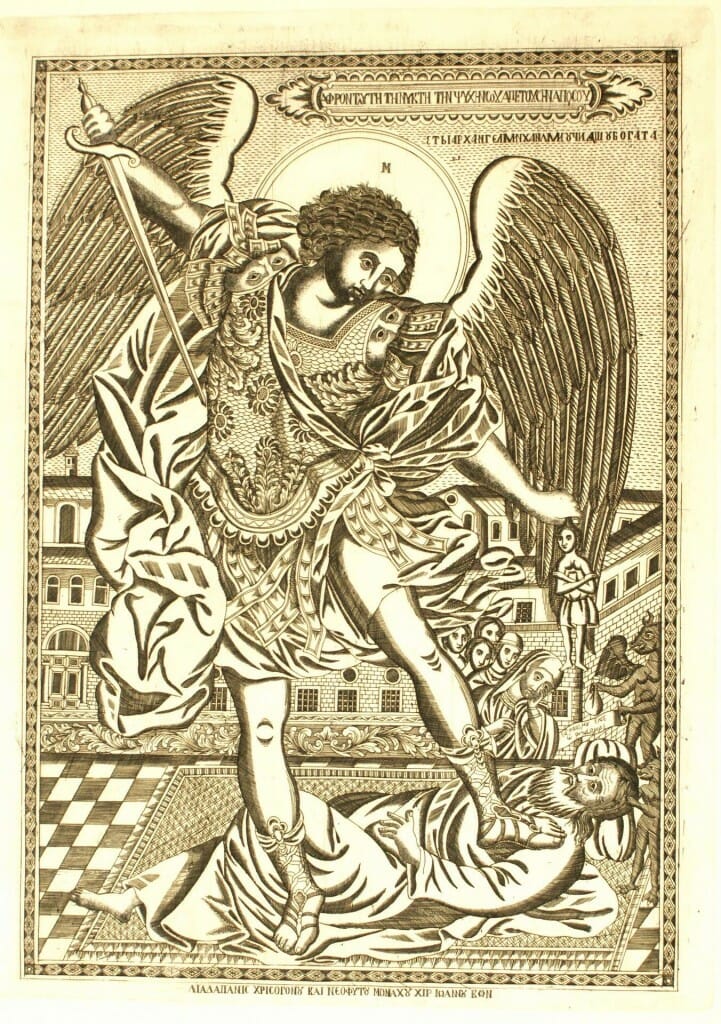 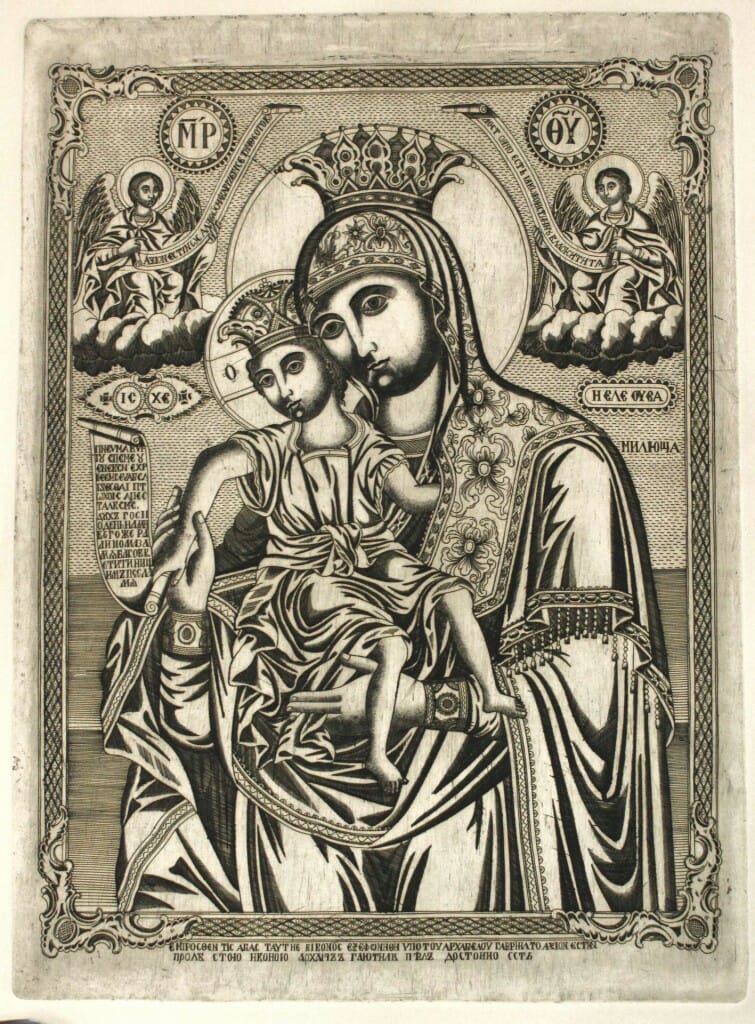 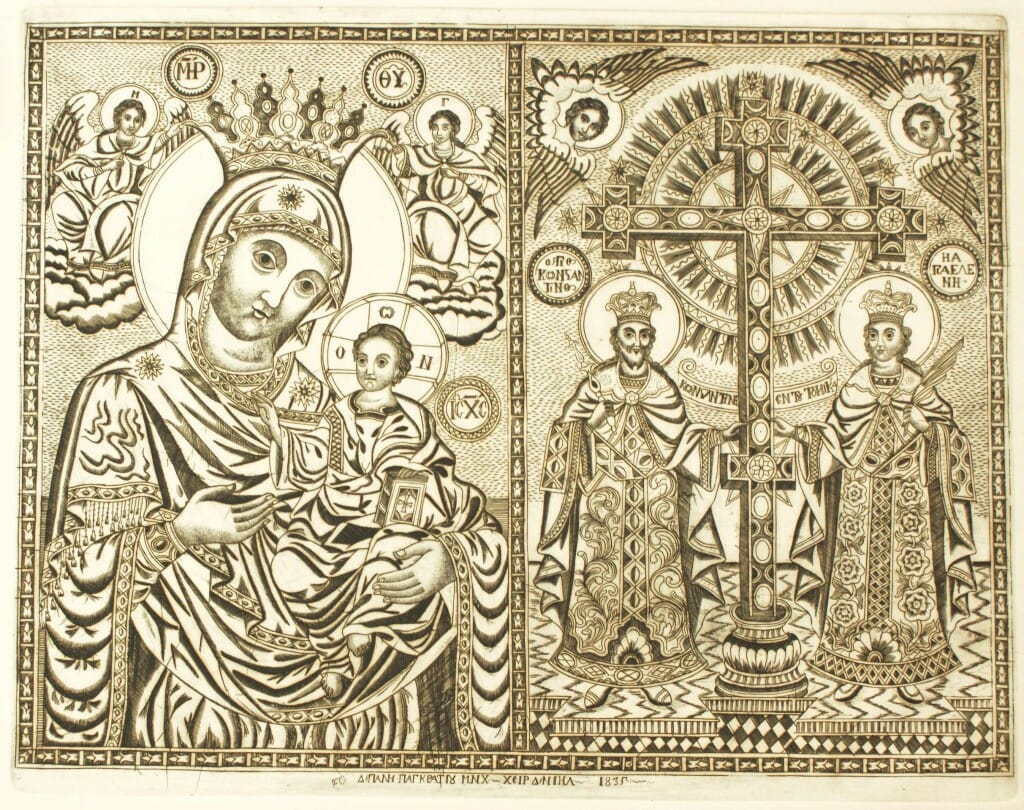 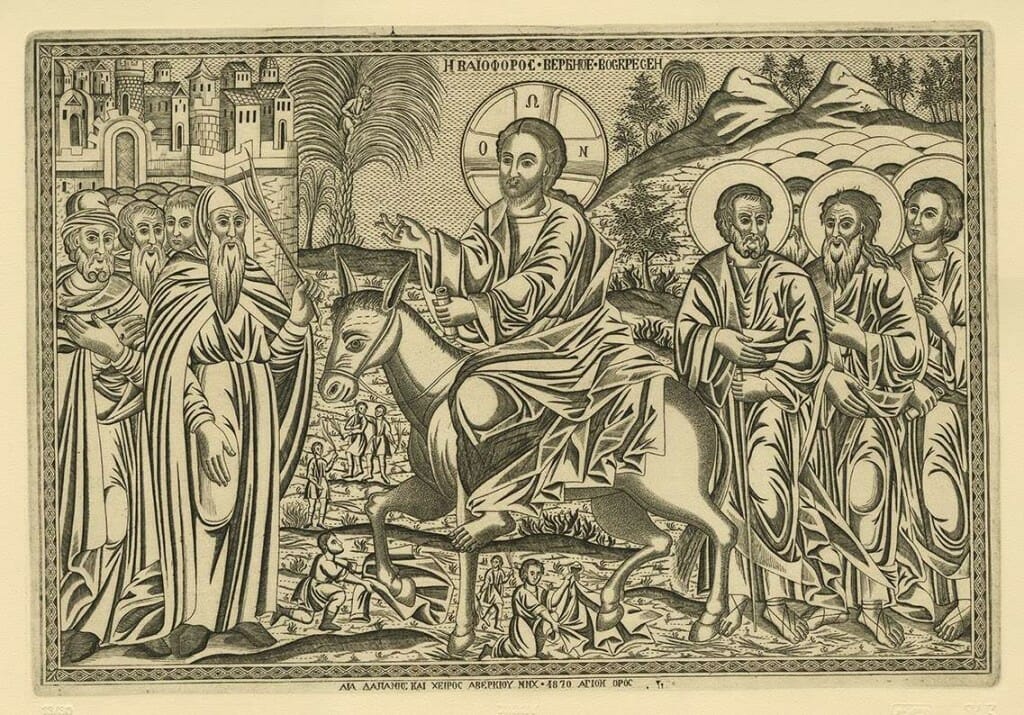 Printed Antimensia are another aspect of Athonite engraving. Numerous prints have been located all over the Orthodox world, usually with multilingual inscriptions that testify not only their endurance in time, and their use as a source of iconographic subject matter but also their unquestionable use as objects in worship. Antimensia usually depict scenes related to the Passion such as the Lamentation at the Tomb, instruments of the Passion, the Deposition etc., and are usually printed on cloth. 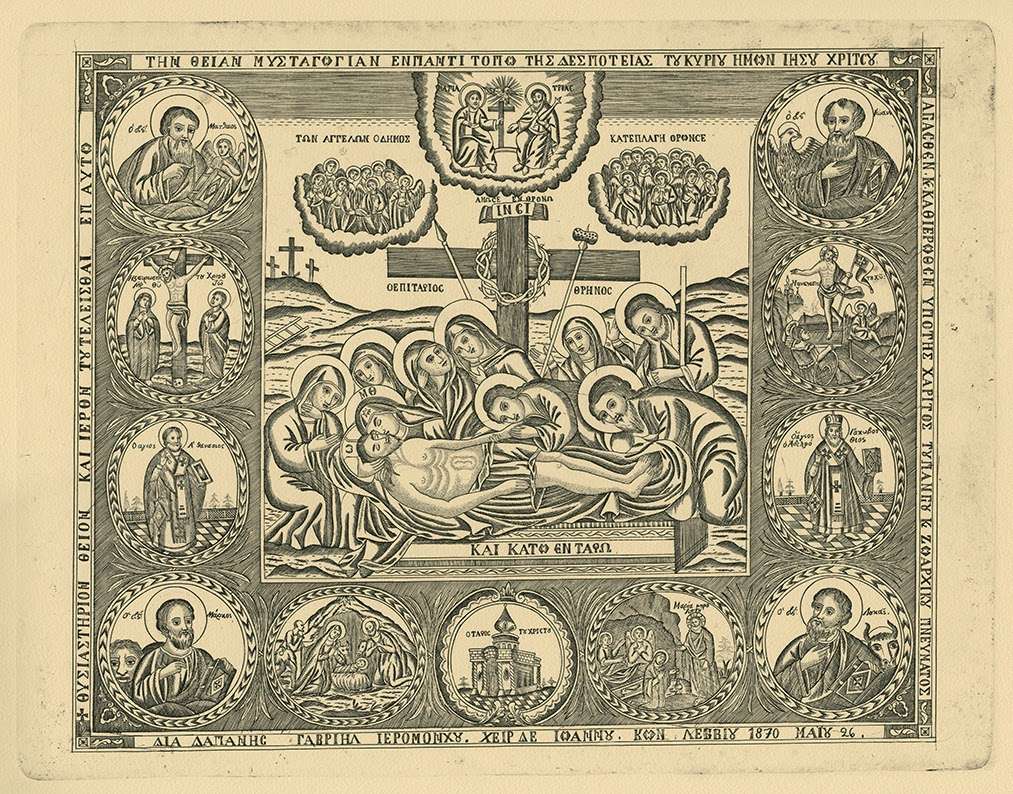 Prints were made to reach a great number of people and that is one great difference they have from paintings; there is no single owner, and each one of the owners has in his procession not a copy but an original work. Most of the Athonite prints had the name of the saint or even lengthy texts engraved in two or sometimes even three languages: Greek, Slavonic or Russian, and sometimes Latin or Italian.

The number of prints circulating amongst people in Greece, the Balkans, and Russia must have been very large. An example is the case of St George the martyr in Ioannina, and within two weeks of his martyrdom in 1838 the first engraving appeared, which was followed during the next 30 years by 13 more variations of the first one. 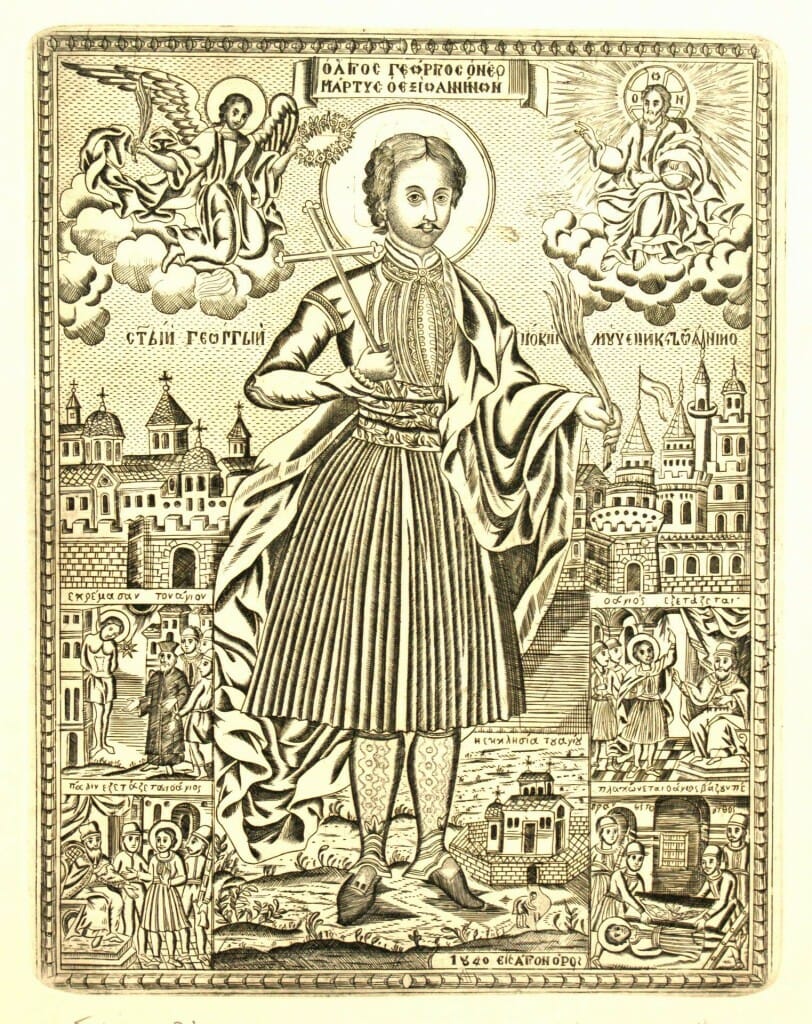 Another source of information comes from a Greek that was the liaison between Mt. Sinai and printers in Europe. From his correspondence we know that printed engravings were shipped in wooden boxes containing 1000 copies each. The number of printmaking workshops in Karyes, the capital of Athos, seems to have been big but unfortunately none of these survive, having become unnecessary since the end of the 19th century. Many of the copper plates were destroyed to produce other copper objects, and the presses were certainly made of wood and easily deteriorated.

Around 1990 a serious effort started on Mt Athos to try and collect, preserve, study, and publicize, what was left from this magnificent tradition. The first serious study was made by Dori Papastratou with her book on paper icons published in 1986. Since then the Hieromonk Ioustinos and Simonos Petra monastery took over the effort and continued the task of exploring this art practice on Mt Athos. The Athos Art Archives were formed, and I set up a print making workshop in Karyes, the capital of Mount Athos, to help preserve and reprint some of the original plates. The effort is continuing, and today around 1100 different engraved images have been located – some of them in multiple copies, and 300 plates of which 120 belong to Simonos Petra. This effort is now at a turning point. A volume containing the corpus of Athos prints is being prepared for publication, but still new funds are needed to explore further and complete this task, especially regarding the study of wood cuts and wood engravings which still remain unpublished. The printmaking workshop was organized in order to reprint from the original copper plates, but there was hope that this might evolve as a nucleus for the creation of new prints by monks or artist-visitors. Unfortunately this has not been possible yet.

The production of Athonite engravings of a religious character like the ones presented might have stopped at the end of the 19th century, but Athos has continued to be a focal point and a magnet up to now for a number of artists and intellectuals from Greece and elsewhere. It has been a motivation for many important Greek artists to make fine-art prints, not for religious use, but still inspired by the Athonite way of life or the landscape – artists like Kogevinas, Rengos, Papadimitriou, Velissaridis, Moschos, Paralis, Nicolaidis, and lately myself as well. There have been a few others, and also some European artists that have been visiting Athos regularly. 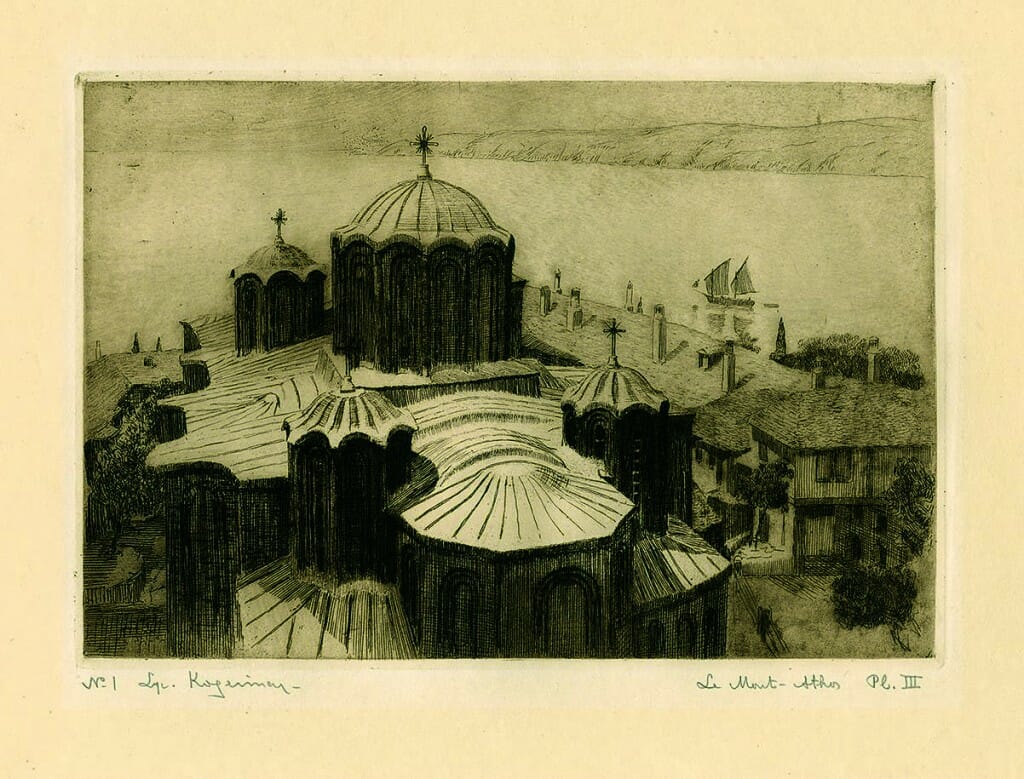 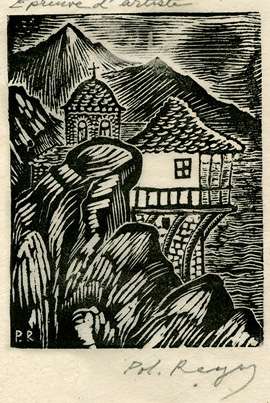 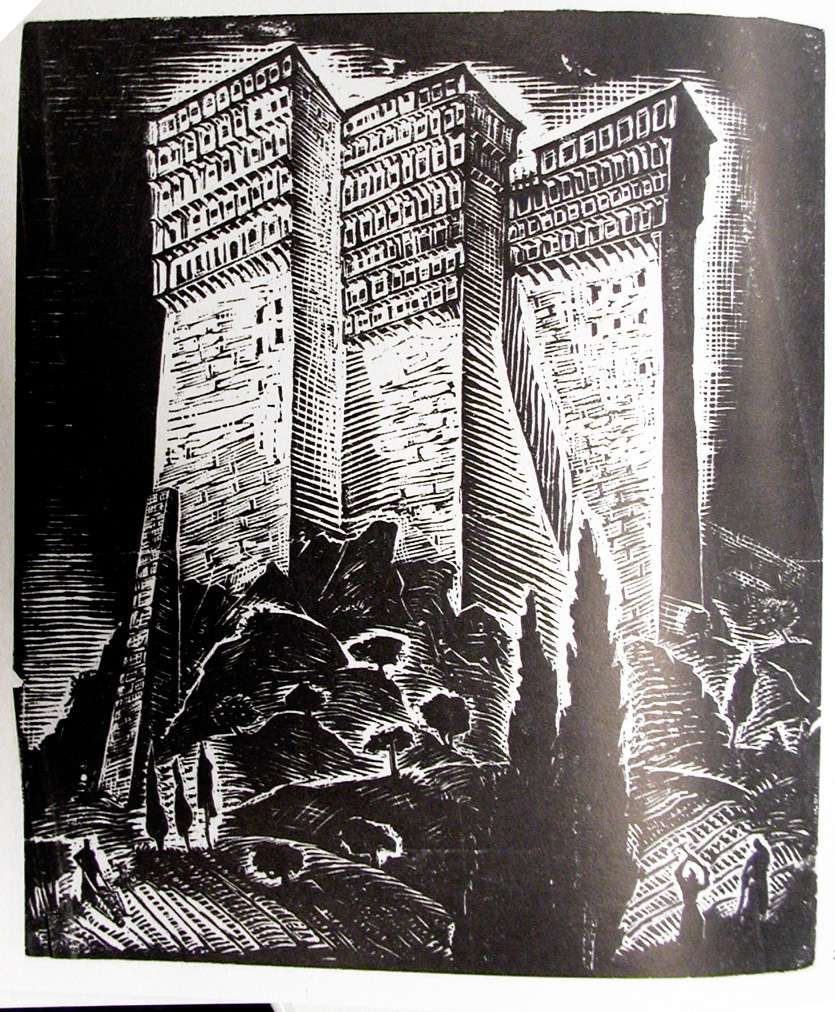 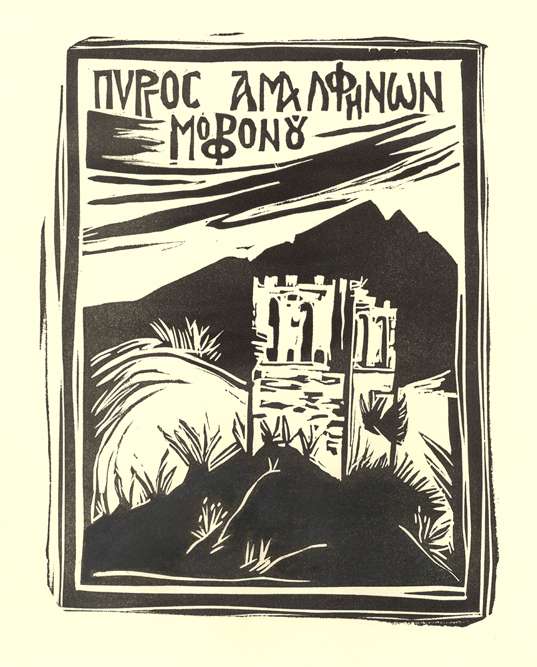 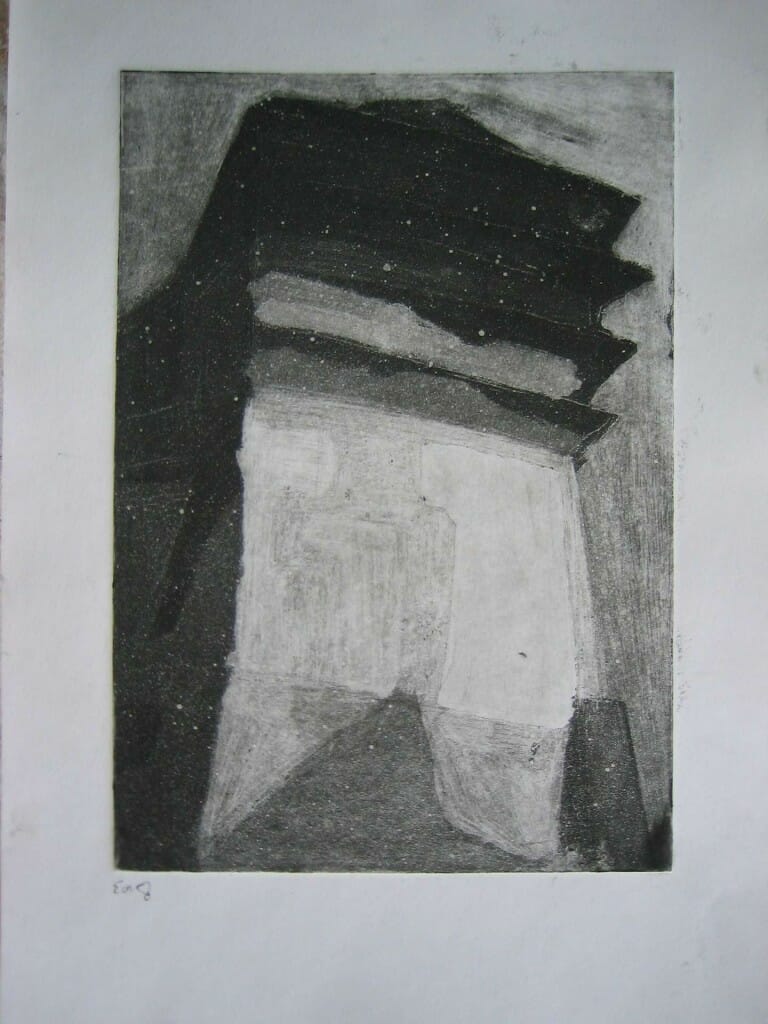 Further information on the subject can be found here: