The Creation of a Christian Culture

“Christianity has a great calling, which many do not ever realize.  This purpose can be defined as the creation of a Christian culture.” – Ivan Ilyin Of all the great callings that Christians are reminded of on a daily basis, the creation of culture is not among the most mentioned.  I would even hazard a guess that many Orthodox would find Ilyin’s quote mildly frightening, even smacking of some ancient, unpronounceable heresy.  And indeed, those arts that we associate as obviously (and safely) Orthodox, such as iconography, sacred chant, church architecture and the like, seem to exist for many in a sort of bubble safely out of the reach of those who might defile them.

But what if Ilyin was right?  What if creating culture was a part of our duty to witness to Christ?  Where would the liturgical arts fit?  Is there some way that they could be integrated into an Orthodox expression within secular culture, grounded in liturgical Tradition?  Is it just a meaningless paradox to suggest that two such obvious opposites as the sacred and the profane are able to coexist in the same space without one destroying the other?

Comfort with paradox, or even more than that – relishing paradox – is very typical of us Orthodox.  Paradox appears constantly in our hymnography, in the writings of the Church Fathers, in some of our best sermons.  It is also particularly inexplicable to a rationalist Western mind.  You can almost hear the inevitable questions: Isn’t it better to avoid those things that the mind can’t possibly absorb?  At least try to explain it in a way that normal reasoning adults can accept.  But why do you insist on the paradox, as if the paradox itself were somehow instrumental?

But of course the paradox is instrumental.  Orthodox experience of the divine never stresses the rational mind, noting its particular clumsiness when faced with the eternal, limitless, and omnipotent.  So, rather than trying to reconcile the illimitable with the limited mind, paradox has the propensity to shatter the limits and boundaries that the mind likes to impose for its own benefit.  And in that moment when the mind, trying to contemplate the unthinkable, just stops working, the mystery comes rushing in and the whole person can exist in the presence of his Creator.

This “strange and most glorious” reality is obvious even to non-Orthodox when they enter an Orthodox temple.  Immediately something is different. One way to describe this would be to say that “time stops”.  The destruction of time, the encroachment of the eternal into the temporal is absolutely necessary for anyone to actually hear God’s “still, small voice.” (1 Kings 19:12)  Orthodox liturgical tradition, in its purest form, is uniquely suited for this destruction of time, this rushing in of mystery.

Getting anyone, even some Orthodox, actually into the church building can be a Herculean effort.  And no wonder.  Why wouldn’t the devil use every means possible to prevent God’s beloved from crossing the threshold of eternity?  This begs the following question: Is there any way of infusing liturgical art into a secular space, so that people can still encounter God?

There is the very real problem of familiarity – the ability of a liturgical art form to conquer time outside of its natural setting is limited by the mind’s constant “normalization” of its surroundings.  David Brook’s recent book The Social Animal draws on a wealth of research to confirm what everyone already knew – familiarity breeds contempt.  Outside the sacred space, the rational mind has the upper hand, and the sense of eternity, the sense of mystery is easily dissipated.  I notice it in myself when I can no longer listen to a particular CD of sacred music because it’s become boring.

If we Orthodox are to be true to our missionary calling, this is a problem that must be grappled with constantly.  Some would say that all liturgical art must therefore be limited to the sacred space – no icons should ever be displayed in museums, concerts of sacred music should only be held in churches.  And they may be right.  But once again the very-Orthodox Russian émigré philosopher Ivan Ilyin would strongly disagree:

“The good news of the Gospel does not consist in the fact that heavens and the earth are opposed to each other or severed from each other because of sin.  Rather, it is that the heavens have already come down to earth in the person of the God-Man… that the possibility and reality of a meaningful “taking on” and transfiguration of the world exists.  The Gospel brings to the world not a curse, but a promise, and to humanity not death, but salvation and joy.”

Ilyin’s central point – that there cannot be a conscious estrangement between the Church and the world – is yet another paradox.  How, if the world tends to make the sacred normal, even banal, can we transfigure the secular by infusion with the sacred?  What role would the liturgical arts play in this mystery?  Ilyin begins to address the glorious paradox:

“[The Gospel] teaches not flight from the world, but the Christianization of the world.  Thus, the sciences, the arts, politics, and the social order can all be those spiritual hands, with which the Christian takes the world.  And the calling of a Christian is not to chop off those hands, but to imbue their work and toil with the living spirit of Christ.  Christianity has a great calling, which many do not ever realize.  This purpose can be defined as the creation of a Christian culture.”

Of course Ilyin doesn’t give his readers the “how”, leaving it to us to figure out.

A few years ago, a small group of Orthodox artists and writers in San Franciscodecided they would stop endlessly discussing this problem, and actually try to do something about it.  Admittedly brazen, we call ourselves “Conquering Time.”  Our purpose was the creation of some sort of artistic form – a play, a concert, a book, a painting – that would allow the audience to have a “point of intersection of the timeless with time.” (T.S. Eliot)

The trick was to find a way to use the liturgical arts within a secular context.  But again, the problem of familiarity and contempt presented itself.  We needed an art form that would in itself serve to accentuate the “time-destroying” qualities of liturgical art.  Drawing heavily on Tolkien’s ideas of sub-creation from his essay “On Fairy Stories”, we decided to try our hand at storytelling.  Four of us wrote an original fairy tale, in poetry and prose, based on Russian and North European models, called “The Gift”.  We also chose ten hymns from the Christmas cycle, some of which were recent compositions, and interspersed them within the story.  Thus, they could stand alone as pieces of sacred music, but they also were intended to provide a commentary on the story – quite literally a “chorus”.

The story itself followed the journey of three sisters who set out from their home to find their fortunes; two of them spurn their mother’s parting advice, the youngest heeds it and receives the gift of her blessing.  While the older girls’ arrogance quickly landed them in serious danger, the sustaining power of their mother’s gift guided the choices made by the youngest daughter, culminating in a dramatic showdown with evil.  On the surface, it was a pretty standard fairy tale.  But by adding the element of liturgical art through the singing of Christmas hymns, the whole event felt a great deal more solemn than any of us expected. 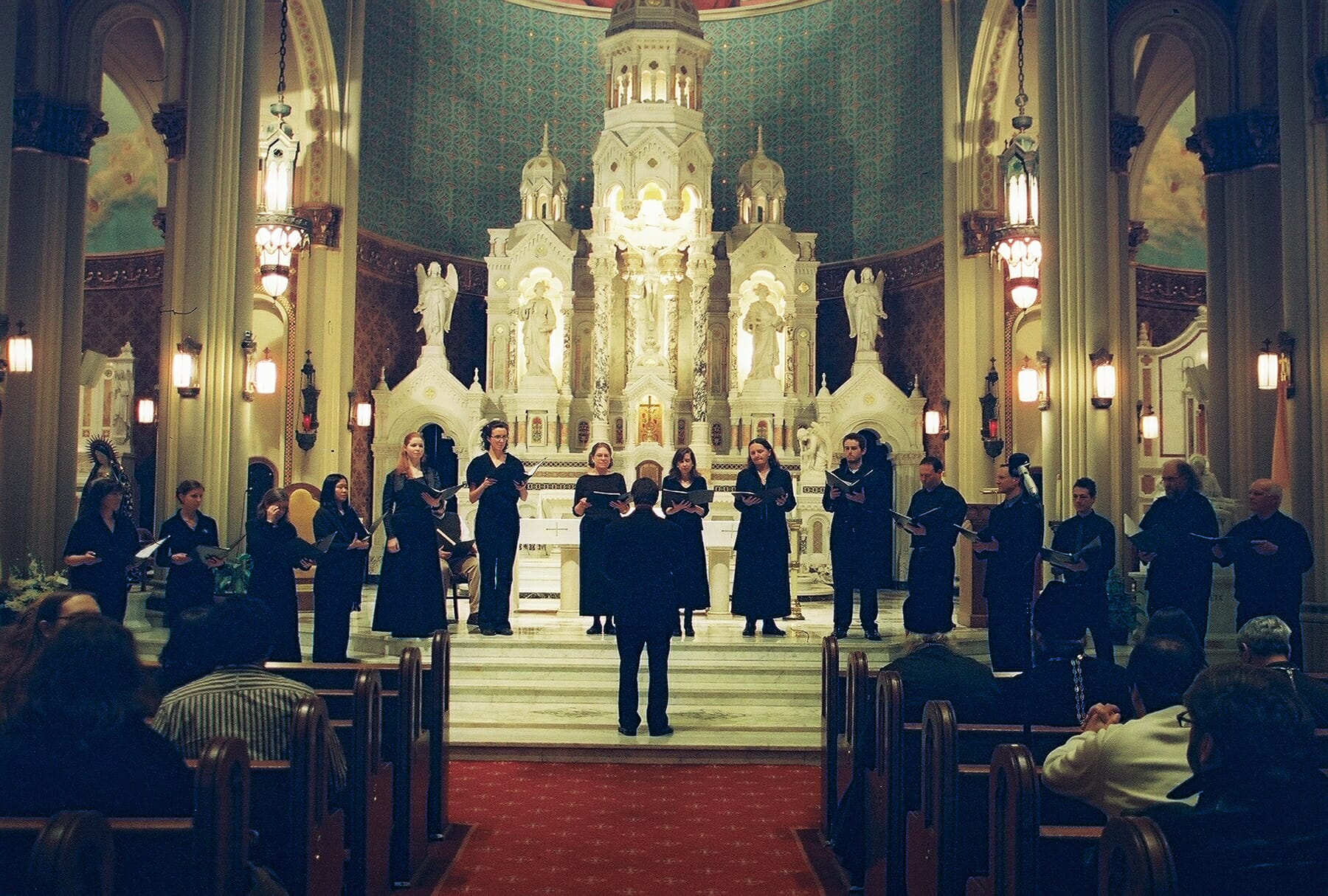 Paradoxically, the strange mix of folk tale and sacred music seemed to resonate, and not only for the fantastic acoustic of Sts. Peter and Paul Catholic Church. The paradox did what it was supposed to – the rational mind, confronted with the strange combination of hymnography celebrating the Incarnation and rhymed declamations of talking animals in the dark forest, was forced to give up and let the mystery assert itself.  The element of “conquering time” certainly was present.  One member of the (largely) non-Orthodox audience went so far as to call the performance a “folk liturgy”.  Of course, it’s disingenuous to assess the ultimate success of one’s own creative brainchild.  But at the very least we hoped we had taken a tentative first step in the creation of a Christian culture, rooted in Tradition and the liturgical arts.  In the words of the late Madeleine L’Engle, we tried to “show them a light that is so lovely that they want with all their hearts to know the source of it.”

Part 2 to come: further attempts at culture creation and some lessons learned that might be useful for others wishing to do the same.