The Creation of a Christian Culture, Part 2

In part one of this article, I tried to establish the importance (and difficulty) of introducing the liturgical art forms into a secular space, in order to help those outside the Church to have a genuine experience of that otherworldliness that allows for the communion of the human and the Divine. Conquering Time’s apparent success with the first performance of The Gift was soon to be challenged by a factor we hadn’t needed to consider yet – cultural context.

In July 2011, a few of Conquering Time’s founding members had the honor of participating in the XII All-Diaspora Russian Orthodox Youth Conference in Paris, France. Over 120 young people from all over the world were in attendance, some as official delegates of their dioceses, some as casual observers, some as lovers of the Parisian lifestyle of croissants and coffee and nighttime strolls along the Seine.

Personally, I was very excited by the potential of this conference. I had, a few months before, gently suggested some ideas about the importance of cultural formation for the youth as a potential lecture topic. Luckily for me, the organizers thought it was a good idea, and so we agreed that I would prepare a shortened version of The Gift as an example of missionary work through Orthodox Christian cultural formation, to be performed during the conference.
That was, after all, the point of the conference – how does one interest the youth in the Church? What kind of missionary work should we be involved in? What works, what doesn’t? Here, I immediately came up against a point of deep cultural misunderstanding between the Russians and those of us from the Diaspora. Most of the Russians were handpicked representatives of various dioceses, and they were often referred to by their superiors as the “gifted youth of the church”. Perhaps it was inevitable that they should think they already had all the answers about proper missionary work.

Of course, it wasn’t all that simple. Many of the ideas proposed by these “gifted representatives” were feasible only among a certain type of person in Russia – the “already churched”. That is a very, very small percentage of the population of Russia (not to say the world), and unfortunately these “churched people” sometimes have a rather insular view of the world. They expected that all you need is to advertise weekend trips to a local monastery, and the rest takes care of itself. So when I suggested that in much of the Western world the very name of “Christian” has become so twisted in the popular understanding to be almost unrecognizable, they were honestly shocked and surprised.

But after some very insistent haranguing on my part, they soon came to see my point – any kind of missionary work is useless, unless there is a concerted effort on our part to form the cultural tastes of the people we are trying to reach. If a person cannot appreciate good art or good literature a priori, then it is much more difficult to hear the “small, still voice” of God. An appreciation of culture requires a kind of internal discipline and training that helps a person concentrate his wandering attention. That state of concentration is a prerequisite for prayer. Thus good culture can actually be a missionary endeavor in itself.

The concert itself was this time only a partial success. Those obvious kindred spirits who didn’t even need to have Conquering Time’s mission explained to them loved it, while the French were largely mystified. Cultural context again! We may have managed to convince many of the Russians that The Gift’s unusual mix of folk and sacred art was not only not blasphemous, but aspiring towards Beauty. However, the French (even those from the emigration) did not find the folk tale or the music (which was intentionally chant-based and traditional) particularly exciting, so the effect was wasted.

As I mentioned in the first part of this essay, familiarity and its twin brother contempt are a very real issue in any such cultural work. That a lack of familiarity could be equally a problem hadn’t really occurred to us until that moment. So could we do something similar to The Gift, with its performance art flavor, its traditional music, and the salt of the liturgical arts, but in a form that would be more impervious to the vicissitudes of cultural context? Perhaps we needed to delve more deeply into the liturgical this time, to leave the avant-garde behind. 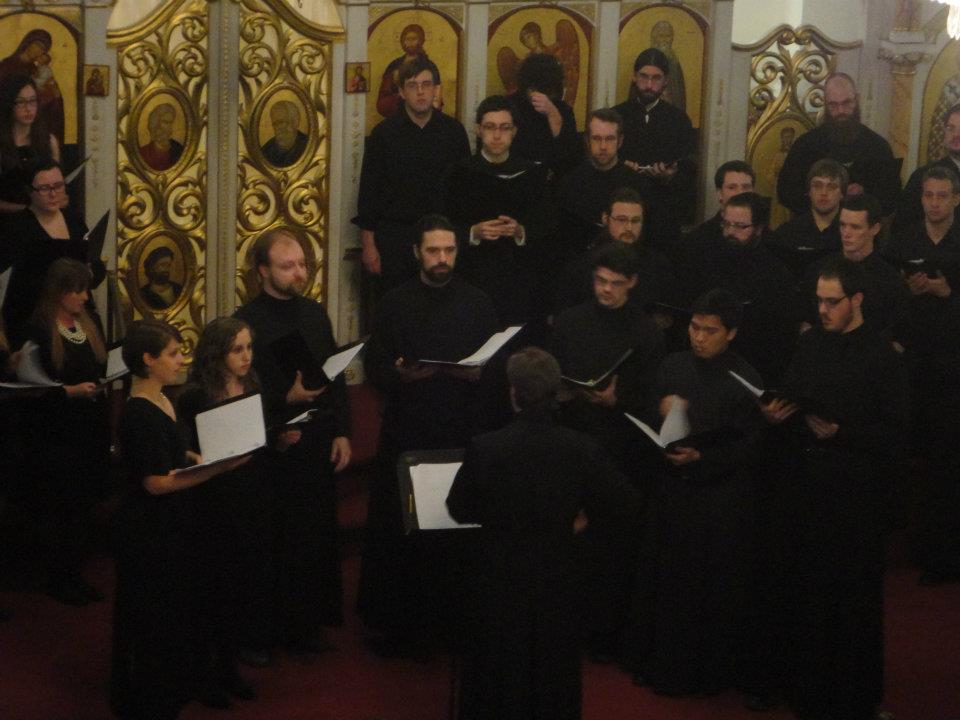 The result was “Two Paths Diverged at the Wood: a Story of Spiritual Struggle, in Eastern Orthodox Chant”, performed in Philadelphia this past February. If The Gift was intended specifically to create an atmosphere, with the Good News of Christ suggested, rather than declaimed, this concert instead emphasized Christianity’s universality. Specifically, we focused on the astonishing assertion that Christianity has the inherent power to transform the human person completely into the likeness of God. As one of the readings in the concert has it:

“What is man, that thou art mindful of him? and the Son of Man, that thou visitest him? For thou hast made him a little lower than the angels, and hast crowned him with glory and honour.”

One of most vivid and astounding examples of this is the story of the Good Thief. For our concert, we decided to dramatize the life of a hypothetical young man who would become the murderer crucified to Christ’s right. Through several vignettes or scenes of readings and hymns, we imagined the life of the Good Thief from a joyful childhood, to a youthful trauma, to a prodigal life of crime, to the final encounter with Christ on Golgotha. The readings in each scene ranged from the Wisdom Books of the Old Testament to the Gospels to the works of the Early Church Fathers to classic poetry and prose. And although the music was necessarily mostly from the Russian sacred tradition, we also included sacred music from Georgia, Greece and Renaissance England.

Thus, when after a tragedy experienced in childhood the Good Thief is forced to choose between the path of suffering and the path of blissful ignorance, he expresses his dilemma in Robert Frost’s words from “Two Roads Diverged in a Wood”:

I shall be telling this with a sigh

Two roads diverged in a wood, and I–

I took the one less traveled by,

And that has made all the difference.

Those words become all the more vivid when the Thief is captured for a murder
and condemned to be crucified. But his journey is constantly contrasted to Christ’s own innocent suffering, in such parallel passages as these:

The real strength of this production wasn’t the writing or the variety of the music. Without our even intending it, the story turned out to be a respectful and effective experience of Holy Week, through the point of view of a direct participant in the events, one who was the first to feel the power of Christ’s salvific Passion. And we didn’t reinvent the wheel. We understood perfectly well that the services of Passion Week are incredibly dramatic in and of themselves. But so many people, even the Orthodox, don’t experience them fully. Even to give the audience a small taste of the power of words such as these would make such a concert a success:

How does the lawless assembly kill the King of Creation, not remembering His gracious acts? He even called them to remembrance, saying: what have I done to you, my people? Have I not worked wonders in all of Judea? Have I not raised the dead by a word? How do you now reward me? Why do you forget me? For healing others, you wound me! For raising the dead, you crucify me! Long-suffering Lord, glory to Thee.

The most inspiring part of the February concert was how excited the Orthodox youth was to take part in such a project. Piggybacking on the Paris conference, the concert attracted over 60 young people all the way from Maine to Florida to sing in the choir. Soon afterwards, Holy Trinity Publications in Jordanville, seeing the potential of such projects, decided to publish both “The Gift” and “Two Paths Diverged at the Wood” as part of a new imprint of books (and other content) with the express purpose of encouraging Orthodox cultural formation in the most effective way possible (both will be published as enhanced eBooks, most likely during the next calendar year). Two more concerts were soon planned in San Francisco during August 2012, and a new production is currently being written for the Christmas season on 2012, which will hopefully feature members of both the Jordanville and St. Tikhon’s seminary choirs.

… It will have to wait until Part 3, a discussion of dos and don’ts geared at those brave souls who are interested in “meaningfully taking on and transfiguring the world” (Ivan Ilyin).