“The first rule of art is beauty.” So begins “A Primer of Pictorial Devices in Medieval Painting” written by artist Gloria Thomas. The primer is a guide to competitors in the Apocalypse Art Prize. The prize is $10,000 and the deadline for entry is December 31, 2013. Complete information about the prize and how to submit an entry can be found on the competition’s web site: Apocalypseprize.com

The theme for all entries is Saint John the Divine’s vision of the Apocalypse, the last book in the Christian canon, also called Revelation. The Apocalypse text is filled with metaphorical images that have influenced world literature and art for two millennia. Who has not heard of the “Mark of the Beast”, the “Battle of Armageddon” or the “Harlot of Babylon”? The competition web site lists 86 possible subjects for entrants to choose from the Apocalypse text, offering what Thomas calls “an unparalleled opportunity for imaginative representation.” 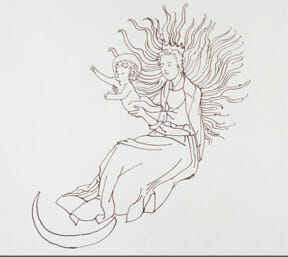 Woman Clothed with the Sun

Subject matter is not the only criteria. The substantial cash prize will go to the artist who is best able to use analogical principles of composition in his or her work. These principles are described in the instructional videos: Revelations: Ideas in Images (Part I and II) also found on the Apocalypse Art Prize web site. Between the hard copy primer available to entrants at no cost and the plethora of resource materials loaded on the web site, participants have more than enough information to carry out the requirements set by the competition designer.

About the Competition Design
Gloria Thomas has spent more than 40 years researching and implementing the principles of pictorial analogy in her works that grace churches, museums and private homes. She now wishes to pass these principles on to other Christian artists, particularly young artists, as a traditional way of making contemporary religious art. Thomas wants to challenge artists to rethink not only subject matter and style, but also, and more fundamentally, how to convey the indescribable through images of things that can be pictorially represented.

There is nothing novel about the objective. Art is continually born and reborn from the desire to express relationships between the seen and unseen through artifact, music and poetry. What is exceptional about the competition is that participants are required to use the language of analogy in their submissions, and the models used to explain analogy are illuminated manuscripts of the High Middle Ages. 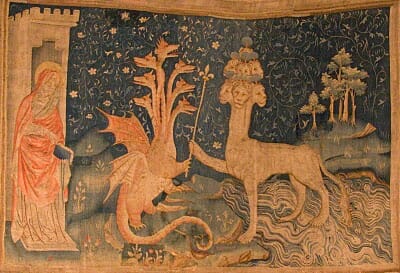 Naturalism vs. Analogical Representation
The amount of art created in the Middle Ages about the Apocalypse is immense. The competition invites artists look to these fabulous examples of image metaphor for inspiration, works like the Abingdon Apocalypse, the Visio Santci Pauli Apocalypse, the Trinity Apocalypse, the Bodlein Douce Apocalypse, and the Angers Tapestries. While the images are highly representational, they share almost none of the aspects of naturalism associated with Renaissance painting. It is not simply because these works preceded the Renaissance; they are of a different order. 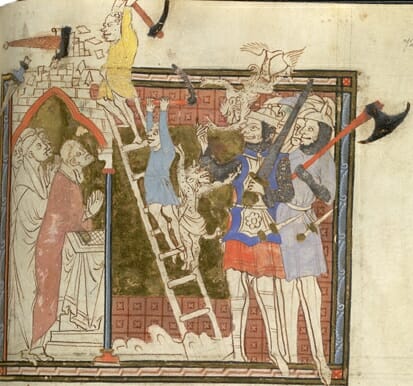 Antichrist Assault on the Church from the Abingdon Apocalypse (1270 AD) housed in the British Library, London

The appeal of Renaissance naturalism is in its portrayal of the arrested moment, a freeze frame in one-point perspective that presents an illusion of reality. The illusion created by naturalism is that the viewer is an eyewitness to some event or emotion captured in a work of art. By contrast, Medieval religious art uses representation of figures and things poetically in order to describe physical and metaphysical dimensions on the same surface. It is a picture plane similar to a stage on which it is possible to view at once “not only this world and the next, but the involvement of the entire cosmos.” As Thomas says, “Medieval art is not an illusion of reality, but an analogy of it. Its scenes are not ruled by light and shade as in nature. Everything is equally illuminated to create an analogy with the light of the intellect which sees all thought with the same clarity.” Analogy does not show how things are related to each other materially; it shows how they are “related conceptually” by giving thought material attributes.

A similar purpose is served in Eastern Orthodox iconography with its overlapping treatment of time and eternity and of the horizon-less earthly domain couched between heaven and hell. When the invention of the camera overwhelmed the artistic devices of naturalism, a long retreat from representational art ushered in a movement generally known as Modern Art in its many forms. Ironically, early modernists such as Cézanne, Matisse, Chagall, and Derain turned to the icon as a way of recovering the freedom of space, form and color exhausted by naturalism.

Modernists like Marcel Duchamp, however, preached a kind of militant iconoclasm that persuaded generations of artists to embrace contempt for meaning and beauty. “What I have in mind,” says Duchamp, “is that art may be bad, good or indifferent, but, whatever adjective is used, we must call it art, and bad art is still art in the same way that a bad emotion is still an emotion.”

History of the Apocalypse Art Prize
Thomas rejected this doctrine during her graduate studies at Queens College of the City of New York [1968-1970]. She reached instead for traditional aesthetics and her faith. “Having nearly lost my sanity in art school, I returned to things I loved as a child, the wonderful paintings of scenes from Holy Scripture.” Her first project inspired by this return was a series of paintings based on St. John’s vision of the Apocalypse. In 1994 Viking-Penguin Press published the series under the title “Revelations: Visions of the Second Coming from the Old and New Testaments.” The paintings were accompanied by a text complied from an interplay of biblical prophecy concerning the catastrophes to befall the cosmos at the end of time, leading up to the Last Judgment and the creation of new heavens and new earth. 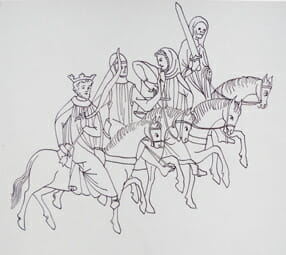 Four Horsemen of the Apocalypse

The Apocalypse Art Prize is a continuation of Thomas’ abiding interest in these themes. It is also a meditation on how art communicates through its “first rule,” that is – beauty. The very notion is heresy in modernist terms of amorphous pigment splatters and just plain “bad art.” Like Thomas, philosopher Roger Scruton is convinced that art has a higher purpose than shock and disposable amusement. “Through the pursuit of beauty,” Sruton claims, “we shape the world as our own and come to understand our nature as spiritual beings. But art has turned its back on beauty and now we are surrounded by ugliness.”

Benefactors of the Apocalypse Art Prize are hoping artists will respond to Thomas’ encouragement to explore an artistic language with a long shelf life as well as a source of subjects with endless opportunities “for imaginative representation.”

Participation in the competition is free and open to all during the year 2013. Winners will be announce June 1, 2014 and awarded prizes according to the age category of the participant.

Persian scholar Seyyed Hossein Nasr beautifully articulates the philosophy of the benefactors of the Apocalypse Art Prize and the underlying crisis they seek to address.

“Traditional art is a channel of grace, and the sacred art which lies at its heart in a sense compliments the social and legal norms promulgated by the revelation. It reflects the beauty which guides us to the source of all beauty, to the one who alone is beautiful in the ultimate sense … to gain greater insight into the meaning of religious art in a world which has turned its back upon the very principles that govern all existence.”