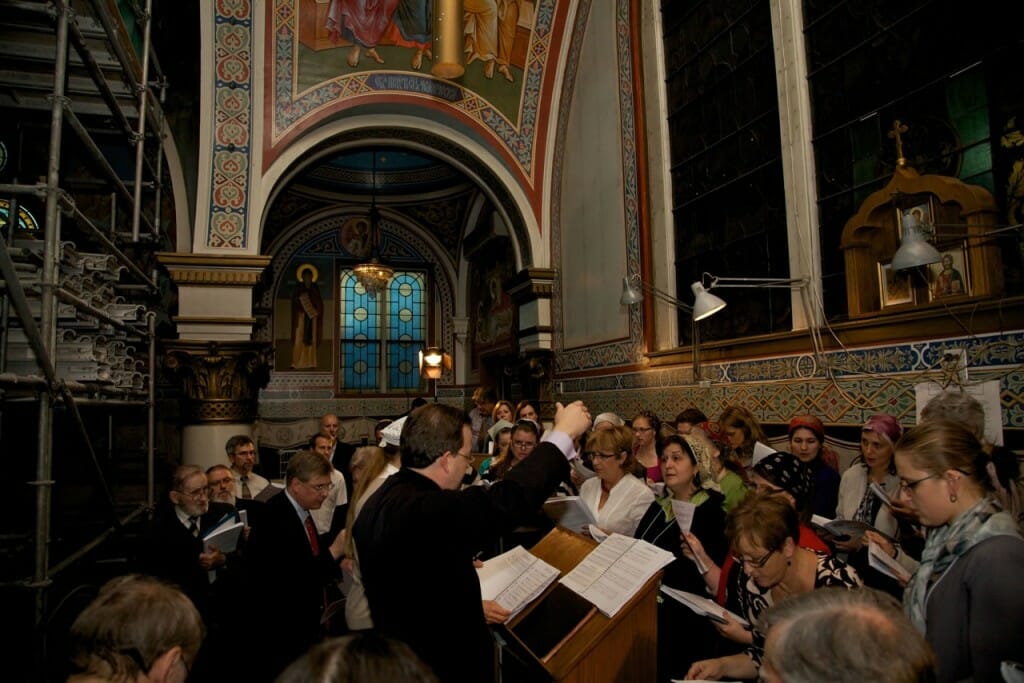 (Editorial note: George Skok, the choir director of Holy Trinity Cathedral in Toronto kindly sent us this summary of ROCOR’s recent Orthodox Church Musicians’ Conference which gathered an amazing array of musical experts from Russia and North America.  Among these, our own Benedict Sheehan led a seminar for the group. The Article is by V.V. Krassovsky)

The 22nd Russian Orthodox Church Musicians’ Conference, held in Toronto from 3-7 October 2012, and hosted by the Holy Trinity Cathedral where Mitred Archpriest Vladimir Malchenko is the rector, was a great success. The Conference was organized by the the Liturgical Music Commission of the Synod of Bishops in cooperation with the local organizing committee chaired by the choir director of the cathedral, George A. Skok. The theme of the conference was “Twenty Years Later: directions in Russian Church Music.” Thanks to a grant from the Fund for Assistance to the ROCOR, the Synodal Commission was able to invite four speakers from Russia, who shared their knowledge and experience. These speakers were:

Ekaterina N. Sadikova, an assistant and singer in the mixed choir of the Trinity-St. Sergius Lavra, directed by the late Archimandrite Matvey (Mormyl), in her presentation, “Continuing the traditions of Russian chanters in the works of Archimandrite Matvey, former choir director of the Trinity-St. Sergius Lavra,” informed the participants of the conference about Fr. Matvey’s role as a chanter and arranger of ancient chants. Her devotion to Fr. Matvey and to the Lavra’s traditions of spiritual music deeply touched many of the listeners.

Vladimir A. Gorbik, director of the choirs of the Moscow Metochion of the Trinity-St. Sergius Lavra and a graduate of the Moscow Conservatory in orchestral as well as choral conducting, shared his vast experience, at the same time focussing on the spiritual approach to the work of choir directors and church singers. During his master-classes for directors and singers, participants witnessed Vladimir Aleksandrovich’s very high level of professionalism and dedication to the church. V.A. Gorbik also gave a talk on “Questions of contemporary performance of liturgical music in the Orthodox Church.”

Professor Kurt Sander (USA) gave a lecture on “Nurturing a living tradition of liturgical music in the Orthodox Church,” where he talked about the importance of maintaining creativity in Orthodox Church music.

In addition to the main lectures, the participants attended the following workshops:

The second cleric of the cathedral, Priest Viatcheslav Davidenko, worked very hard in support of the conference. The organizers are especially grateful to him for his simultaneous translations from English to Russian, which he did for the Russian-speaking participants.

It is noteworthy that the choir directors from the two major monasteries of ROCOR and the OCA – Hieromonk Roman (Krassovsky) from Holy Trinity Monastery (ROCOR) and Benedict Sheehan from St. Tikhon’s Monastery (OCA) – were both present at the conference.

The conference culminated in the festal hierarchal services, headed by His Eminence Archbishop Gabriel of Montreal and Canada, together with a multitude of clergy in a church filled with worshippers.

Joining Archbishop Gabriel on Sunday morning were Bishop Job of Kashira (Moscow Patriarchate) and Bishop Irenee of Quebec (Orthodox Church in America). This was the first concelebration in Canada of hierarchs from ROCOR, the MP and the OCA.

Muisc sung during the Divine services included the compositions of Metropolitan Hilarion (Alfeyev) of Volokolamsk, Archbishop Ionafan (Yeletskih), Archimandrite Matvey (Mormyl), Deacon Sergei Trubachev, Kurt Sander, Nun Juliana (Denisova), N. Schidlovsky, G. Lapaev, B. Feoktistov, K. Mironov, S. Tolstokulakov, B. Ledkovksy, M. Konstantinov and others. The combined choir sang as one and most prayerfully under the direction of various choir directors who were participants of the conference.

It should be mentioned that the Holy Trinity parish welcomed the participants of the conference at a rather complex time – the cathedral is undergoing major renovations, and scaffolding is everywhere, both inside and outside the church. Despite these issues, a group of volunteers headed by the Church Warden, Alexandra Y. Furlani, worked to bring the church to a majestic state, and the services and other conference activities there took place with minimal disruption.

As is customary, the conference closed with a banquet, and it must be said that it was a glorious one, organized by the Sisterhood of the parish under the direction of the Head Sister, Anna P. Zotova. The Rector, Fr. Vladimir Malchenko, gave a speech thanking the Synodal Liturgical Music Commission, the local committee, the guests who had travelled from Russia, the Sisterhood, the participants of the conference, and all parishioners.  Father Vladimir presented gifts to the members of the Commission and the local organizers.

In his word of thanks, Archbishop Gabriel noted the importance of work in the field of Church music and talked about a number of current related initiatives, inviting everyone to come to the services at the Synodal Cathedral in New York on October 28th this year when the Metropolitan Cathedral choir, under the direction of P.A. Fekula, will sing the Divine Liturgy to the music of Mikhail Sergeyevich Konstantinov, the famous choir director of the San Francisco Cathedral, to mark the 30th anniversary of the day of his passing.

Brief remarks were also made by the Chairman of the Liturgical Music commission, Archpriest Andre Papkov, and by the head of the local committee, G.A. Skok.

Protodeacon Serge Arlievsky, a member of the Synodal Liturgical Commission, commemorated departed labourers in the field of liturgical music, starting with Metropolitan Laurus, the late chairman of the Liturgical Music Commission, as well as Archimandrite Matvey, Deacon Sergei Trubachev, Alexander Ledkovsky, who had been a member of the Commission, and others. “Many years” were proclaimed for the Rector, the Sisterhood, and all parishioners.

Especially moving was the performance by the children’s choir “The Trinity Nightingales,” directed by Mariya V. Bakhvalova, made up of children from the parish Russian School, where close to 300 students are enrolled. As they performed Russian songs, the audience was clearly moved and many had tears in their eyes. The young singers were rewarded with boisterous applause.

In conclusion, one must mention the enthusiasm and joyful mood of the participants, who will return to their places in the churches of Russia abroad with renewed strength and energy as they continue their work in the field of liturgical singing.

(We leave you with a few pictures of the conference.  For even more images, see this same article on the ROCOR website: http://www.synod.com/synod/eng2012/20121023_entoronto.html) 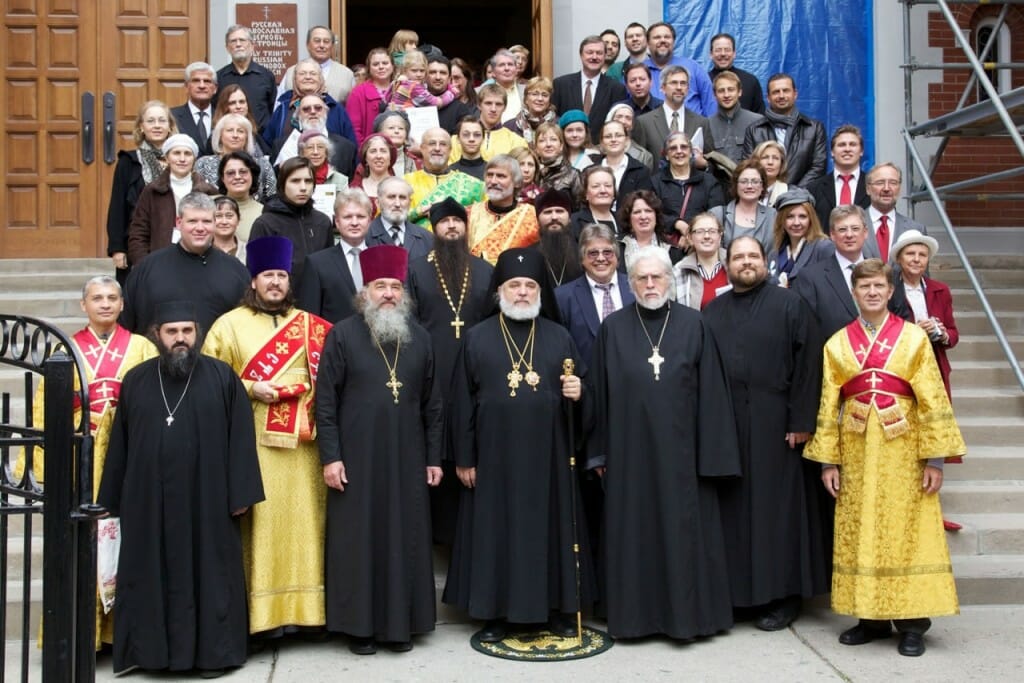 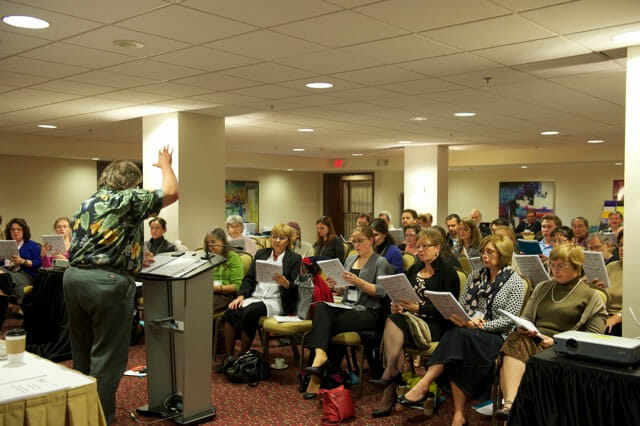 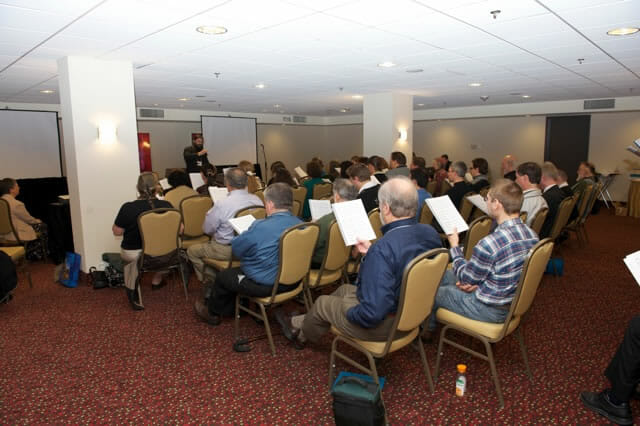 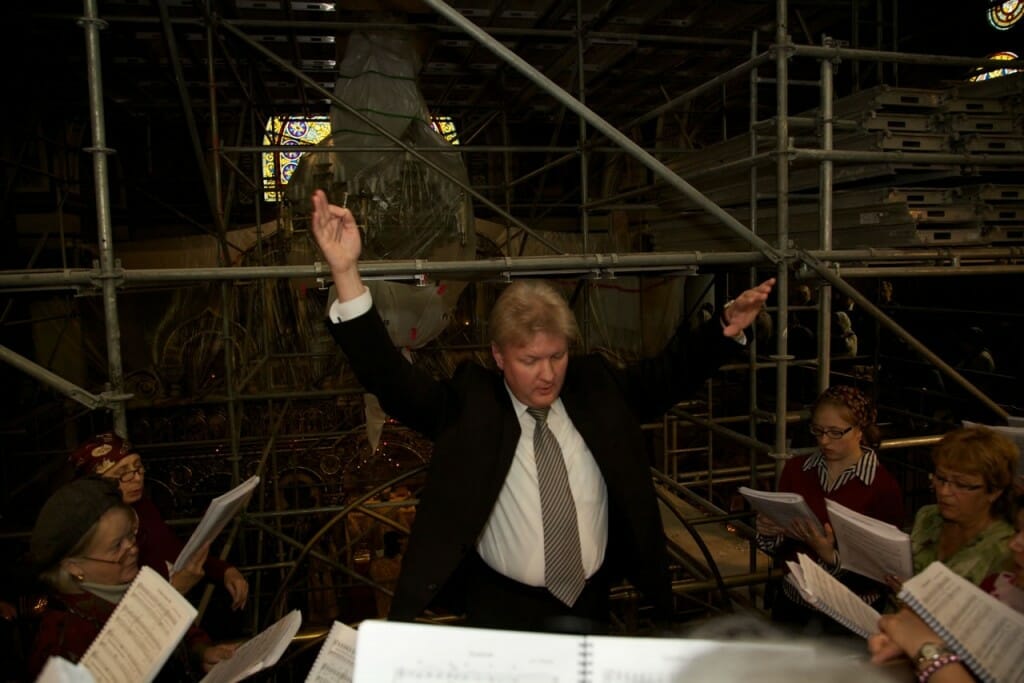 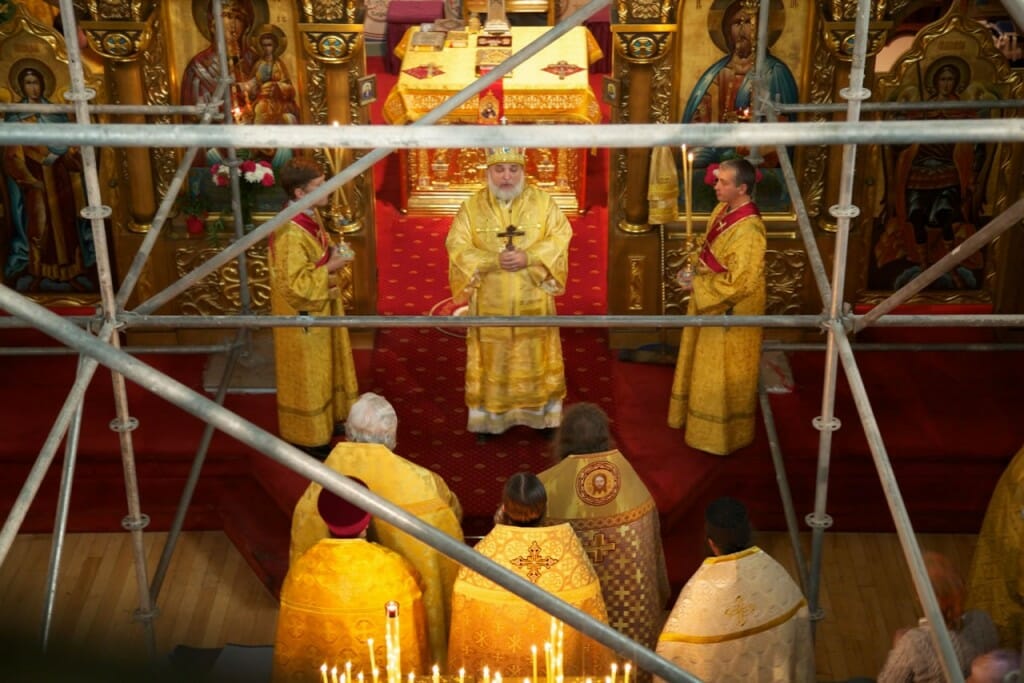