Review of “TREASURE IN A BOX: A Guide to the Icons of St Andrew” by Mary Kathryn Lowell 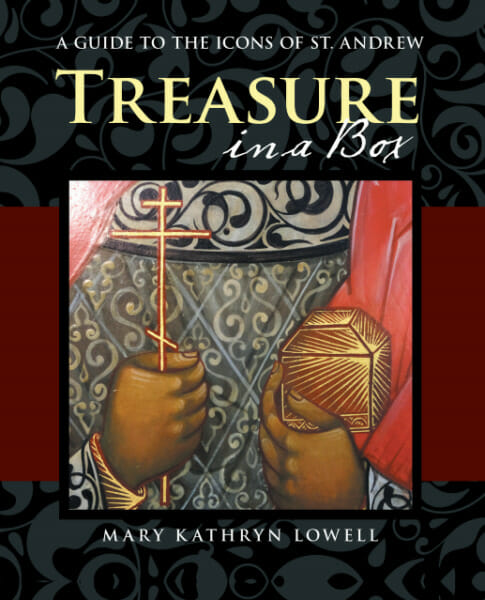 In this newly published book, Mary Lowell describes the eighty-six icons and murals painted by Ksenia Pokrovsky (1942-2013) for St Andrew’s Orthodox church in Lexington, Kentucky. The icons and this book about them comprise a graphic account of the history of salvation, a visual catechism. The icons depict not just the major feasts of the Orthodox church but also other scenes from the life of Christ and the Mother of God. Also included are prophets and saints, some of them recent, such as St John of San Francisco and St Raphael of Brooklyn.

Mary Lowell will already be familiar to Orthodox Arts Journal readers for her insightful articles, and more broadly known as the founder and director of Hexaemeron, a non-profit organization dedicated to sacred arts education.

The iconographer Ksenia Pokrovsky was a Russian émigré, whose life is as illuminating as her icons. Who was she and what was her background? 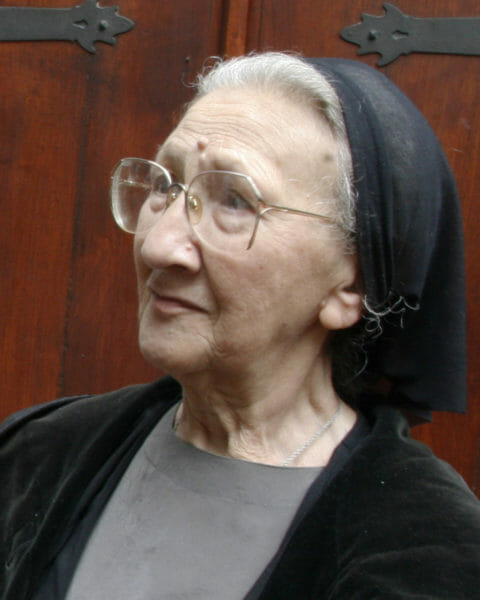 In 1984 I visited the USSR and had the first of a number of clandestine meetings with a devout Orthodox couple, Lev and Iulia. The country was still under communism, and yet the couple had the courage to organize a weekly secret meeting with fellow Christians in their Leningrad home. This was punishable with imprisonment. In fact, at that very time a future friend of mine, Alexander Ogorodnikov, was languishing for such a ‘crime’ in a prison near Siberia.

As if this risk were not enough, Iulia was also an icon painter, and as our review book states, ‘painting new icons was a criminal offense on par with trafficking illicit narcotics, firearms, pornography or the possession of banned literature and foreign currency’. Any teaching or learning of the sacred art therefore had to be done secretly. Even pigments had to be purchased carefully. To avoid detection Iulia was using watercolour paints as her source of pigments, and then adding egg to make her tempera paint.

Such also was the environment under which Ksenia Pokrovsky learned icon painting. Ksenia and her husband were fortunate enough to rent a summer house (dacha) in Zagorsk near Holy Trinity Monastery, with a leading icon teacher as her neighbour. This was none other than the renowned Maria Sokolova, a state-sponsored restorer at Holy Trinity Lavra of St. Sergius, but who in private life was a nun with the name Mother Juliana. 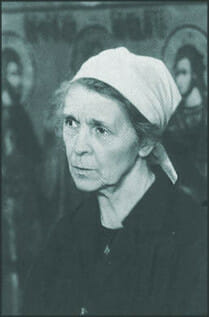 Under Mother Juliana’s inspired tuition, Ksenia herself eventually became proficient enough to teach others. Her home of five children was frequently filled with students. In due course she founded the Izograph Society of Russian Iconographers, some of whose members are now leaders in the current revival of iconography in Russia. But all this was at great risk. The KGB once interrogated her, and as she later discovered, had even bugged her apartment.

Eventually the atheistic restrains began lifting under Perestroika, so much so that in 1989 there was a large exhibition of contemporary icons in Moscow, including works by Ksenia and other Izograph members. However, the murder in 1990 of the Pokrovsky’s close friend and mentor Fr. Alexander Men, and the instability of the nascent Russia led the family to emigrate to the USA.

Her reputation as an iconographer and inspiring teacher had preceded her, and soon she and her daughter Anna were receiving commissions, and Ksenia asked also to teach. Included in the many commissions were the icons at St Andrew’s church which are the subject of this book, painted from 1992 to 2005. There are the largest collection of Pokrovsky icons in the world.

The book is laid out as a journey through the church of St. Andrew’s, but most importantly, through the life of Christ and the Mother of God as depicted in Ksenia’s icons and murals. Approximately half a page to a page is dedicated to each image. It is beautifully written, and clearly set out. My only complaint is that the images are somewhat small, especially considering the complexity of many of the scenes, and their frames unhelpfully fussy. But doubtless the small size was necessary in order to keep the book’s cost within reasonable limits.

The book begins with an explanation of the Orthodox temple as an icon in itself. Just as the Old Testament temple ‘was a modelled vision of heaven wrought in gold, silver and precious stones’ so is the Christian temple ‘a mystical description of the sanctuary “which the Lord pitched, and not man”.’

But the book is more subtle than just an historical narrative, for interspersed are explanations of other icons that offer theological insight into the significance of the life of Christ and His Mother. We have for example a mural of Gideon and the dewy fleece: ‘According to exegeses from the Church Fathers, the fleece represents Mary’s virginity and the dew, Christ.’ Another depicts Moses striking the rock from which flows water: ‘In this analogy, the Virgin Mary is the rock and Christ the waters that issue forth from her.’

Another chapter includes an exegesis of nine Old Testament prophets with a helpful explanation of their prophecies concerning the Mother of God. The Paschal Cycle and the Feast of the Annunciation follow, then the miracles of Christ, and the Resurrection through to the Lord’s Ascension and Pentecost. Short lives of the twelve apostles are followed by an exegesis of the Transfiguration and Dormition icons, and lives of thirty-four saints and angels depicted on the south wall. The book finishes with a short life of Ksenia Pokrovsky. 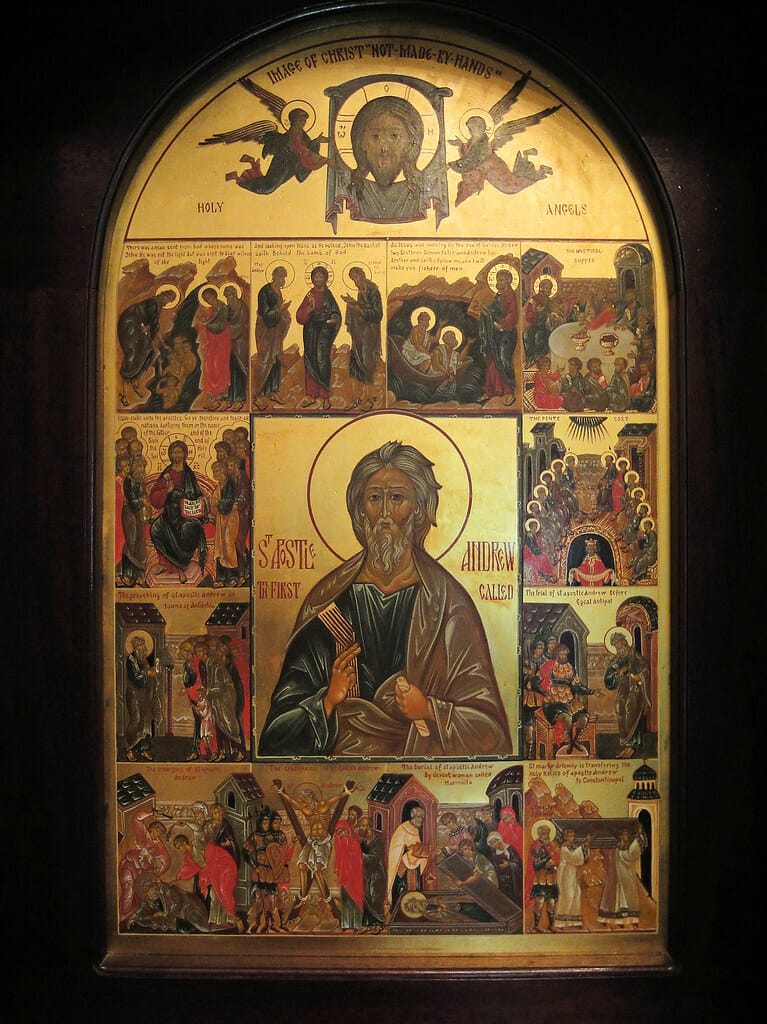 St. Andrew with scenes from his life, by Xenia Pokrovsky. Photo by Jim Forest

Mary Lowell set herself a challenging objective, aiming not merely to give individual accounts of each icon but to show how each is a thread in the single tapestry of God’s work in Christ. She has succeeded, since the book reads smoothly, skillfully guiding us through the complex array of subjects. She offers real nuggets of insight for those already knowledgeable, but most importantly, she has created a very readable catechetical tool for those wanting an overview of the Gospel or a teaching tool.

The author sets the icon firmly in the context of the whole Church, as a temenos of holiness: ‘Icons in their most literal aspect act as signs that point to the immediate presence of Christ among us, not as a philosophical speculation, but as Very God of Very God.’

Treasure in a Box can be purchased through Archway Publishing or Hexaemeron.org. 100% of the royalties will go to support the ongoing iconography projects of St. Andrew Orthodox Church and/or the philanthropic objectives of Hexaemeron to support liturgical arts education and liturgical artists. It is hardback, full colour, around 168 pages, and costs approximately $40.