Our Lady of Lincoln Sculpture

I had often wondered if a three dimensional sculpture could be made to act like an icon, leading the viewer to the holy person depicted rather than acting as a self-contained art object. And so I was pleased when I was commissioned to design and carve a two metre (6′-6″) high stone sculpture of the Mother of God for Lincoln Cathedral, England. 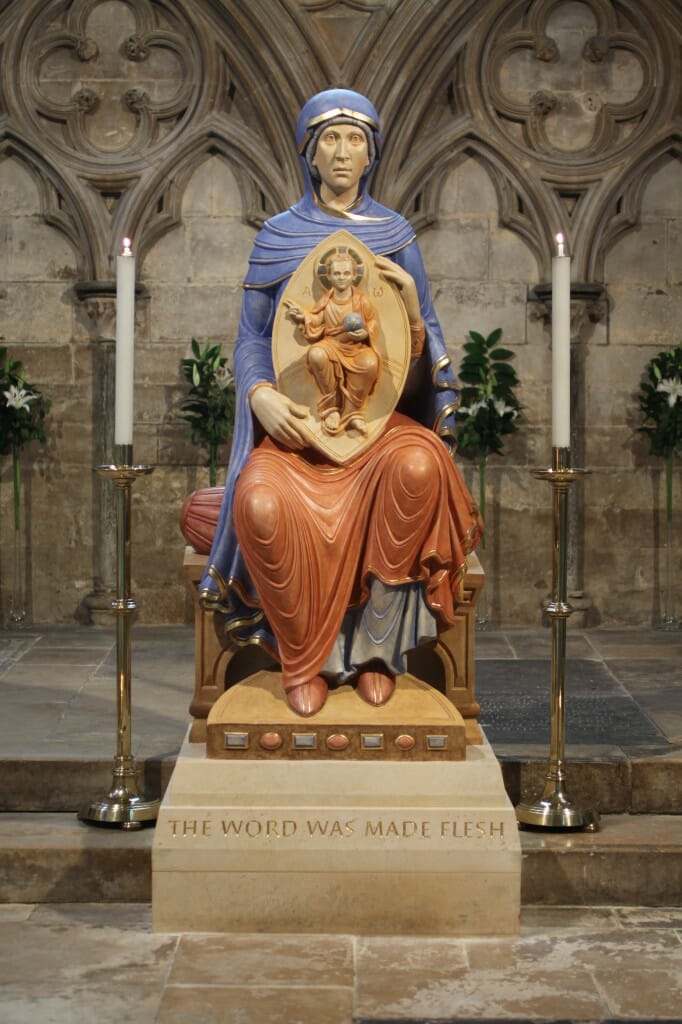 Our Lady of Lincoln, Lincoln Cathedral, England. Completed May 2014. Carved from a single block of Great Ponton limestone. Total height, about 2.3 metres (7′-6″). Polychromed with egg tempera and casein, using azurite and ochre pigments, and gilded with 23 1/2 carat gold leaf.

This great cathedral was reputedly the tallest building in the world from 1311 until 1549, when its central spire collapsed. It is dedicated to the Blessed Virgin Mary and in medieval times was the second largest centre of pilgrimage in all England, after Walsingham. The focus of veneration seems to have been a statue of the Virgin and Child, until this was destroyed in the iconoclastic ravages of either Henry VIII or of Reformers in the 1640s under Oliver Cromwell. Writing around 1670 or earlier, the antiquarian Sir William Dugpole describes in volume six of his Monasticon Anglicanum “a great image of Our Lady, sitting in a chair of silver and gilt…” 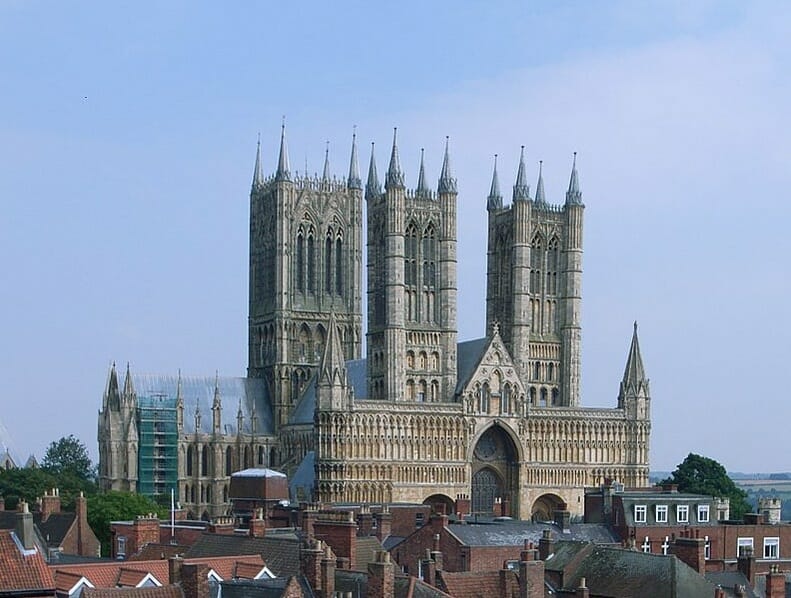 A few years ago it was decided that a replacement sculpture should be commissioned to help renew veneration of the Mother of God at the Cathedral. Fifteen sculptors were approached, and eventually the decision was made to commission me. It is significant and encouraging sign that a major factor in choosing me over the many other better known sculptors was that I was a specialist liturgical artist, and therefore had an understanding of the particular requirements of liturgical art. Hitherto, most cathedral committees, at least in Britain and in the Anglican/Episcopalian communion, have tended to choose artists whom they thought were merely good artists, and perhaps would create some thought-provoking work. All fine for the gallery to have cutting edge modem art, but not usually appropriate for church worship!

Although the Orthodox Church has preferred relief sculpture and not traditionally used three dimensional statuary, as far as I know there are no canons actually prohibiting such statuary. And so I was willing and eager to see what could be done when Lincoln approached me. I discuss the issue of fully rounded sculpture in an OAJ post of January 30, 2013, where I also give a brief explanation of the maquette I created for the Lincoln commission. Although I am not promoting the use of three dimensional iconography within Orthodox churches, there does seem to me to be a lot of scope for making more iconographic the statuary tradition that exists, and will continue to exist, in Catholic and many Anglican churches.

After four years of preparatory meetings and four months of carving the sculpture is now completed, and was dedicated by the Bishop of Lincoln on May 31st. 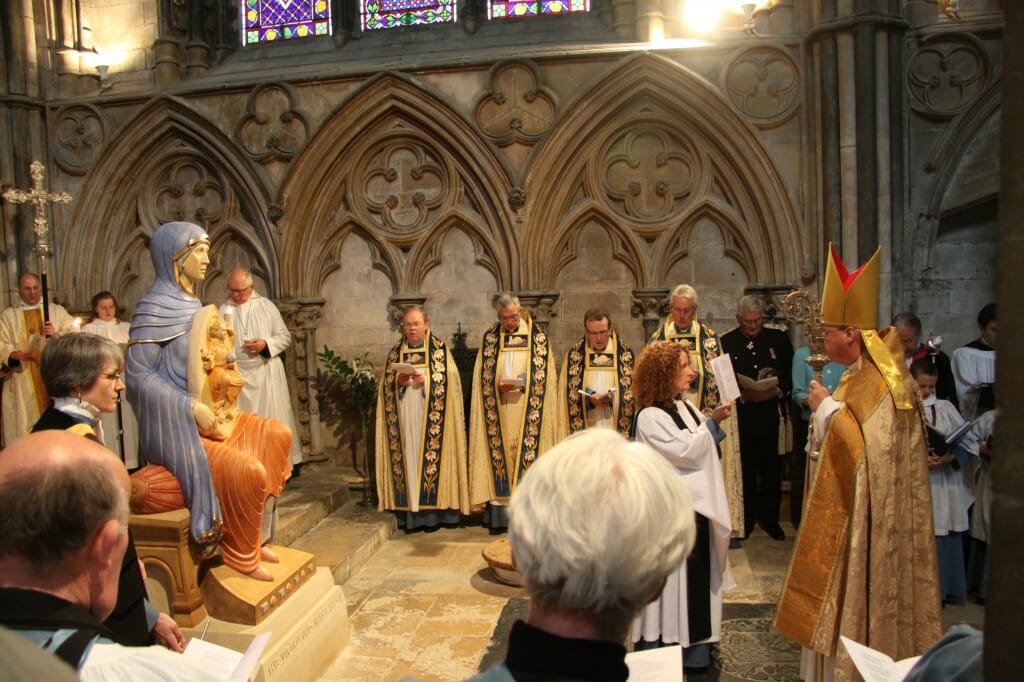 The first stage of its creation was to make a maquette. The first study I made was of the Eleusa type of the Virgin, which emphasises the tenderness of Mother and Child. The committee and I then decided that a design which placed more emphasis on Christ’s divinity would be preferable. And so I came up with a second maquette and drawing which was an adaptation of the icon type called Our Lady of the Sign. In the maquette Christ is set within a mandilion of a vesica piscis shape, held by the enthroned Virgin. This vesica represents both heaven and the Virgin’s womb. Christ holds a sphere of the world to indicate that while a human Child He remained the Creator and sustainer of the universe. 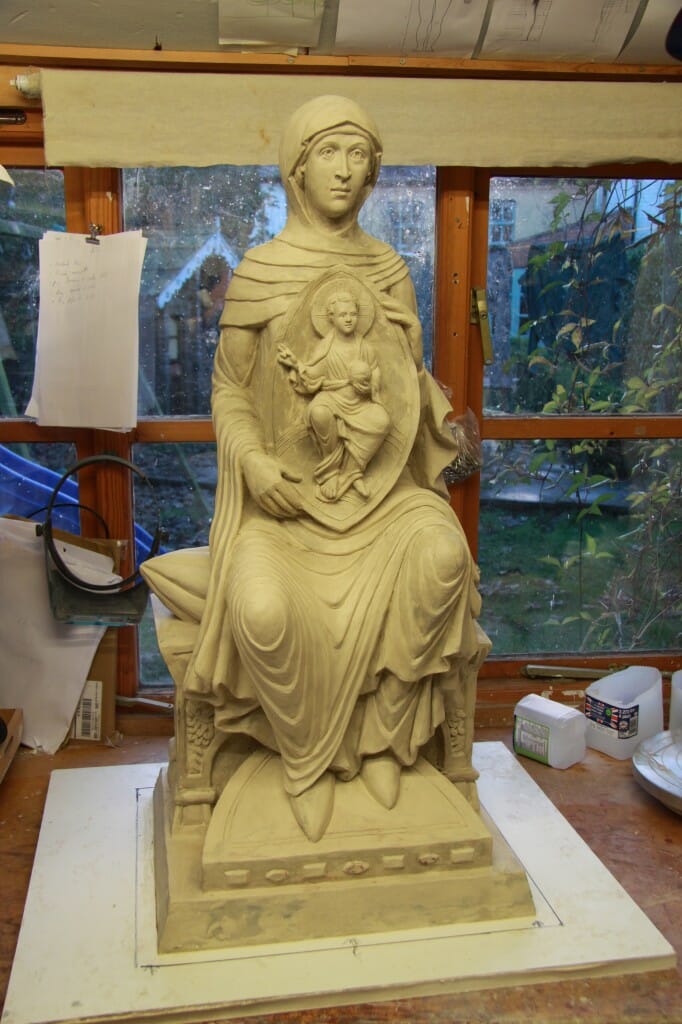 Romanesque work is a major influence in the way the drapery is modelled. I did this to relate the sculpture to the existing Romanesque elements of the Cathedral, and also because I feel that this ‘wet fold’ style, as it is sometimes called, communicates so well the sense of a transfigured cosmos. The rhythmical forms are abstract but also follow basic laws of drapery. They are earthy and heavenly at the same time. Here I am drawing on the rich tradition of Western medieval iconography, something I think important in order to indigenise the Orthodox church in the West without adopting its secular aspects. 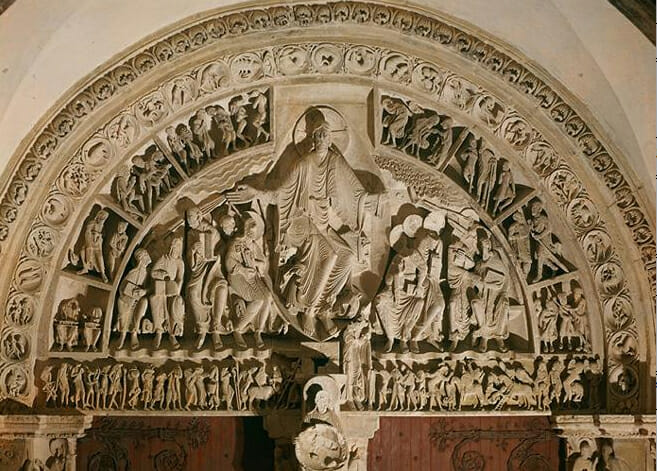 I first modelled a half size maquette in clay, made a silicon rubber mould, then cast from this a plaster version. This maquette was then scanned and the limestone block roughed out by computerised robot to 15mm of the final surface. This mechanised roughing out saved a lot of time, but also left sufficient unhewn stone for my assistant and I to make artistic refinements and adjustments as we hand carved with chisel and mallet.

It was quite a job finding a quarry which could supply a sufficiently large block, 200 x 90 x 80 cm (78 x 35 x 31 inches), and of suitable quality. After looking at samples from all over Europe the decision was made to look more locally, mainly because we wanted the sculpture to be an offering from the people and land of Lincoln. We eventually found a suitable piece, chosen from  among five blocks extracted from two quarries. The quarry owner gave the stone for free. The uncut rock weighed about six tonnes. 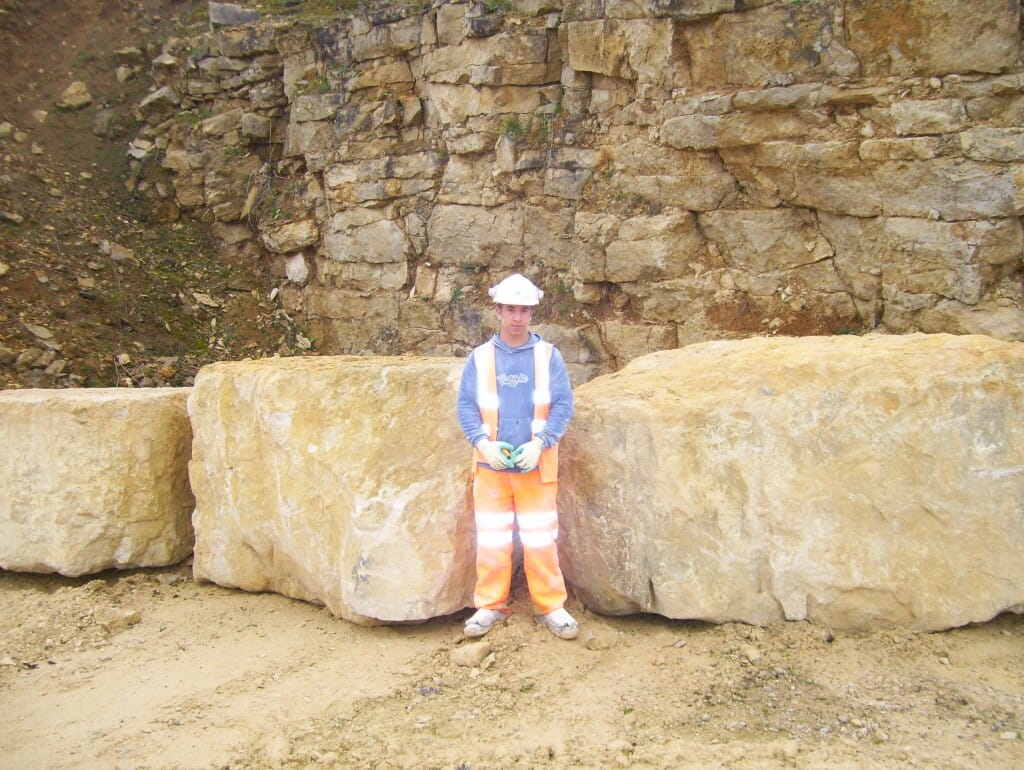 The three of the five rough blocks from which the final block was chosen.

After the block was roughed out, my assistant Martin Earle and I then spent about three months carving, with a former student helping in the last month to polish the surface. We were like bees around a flowering bush! 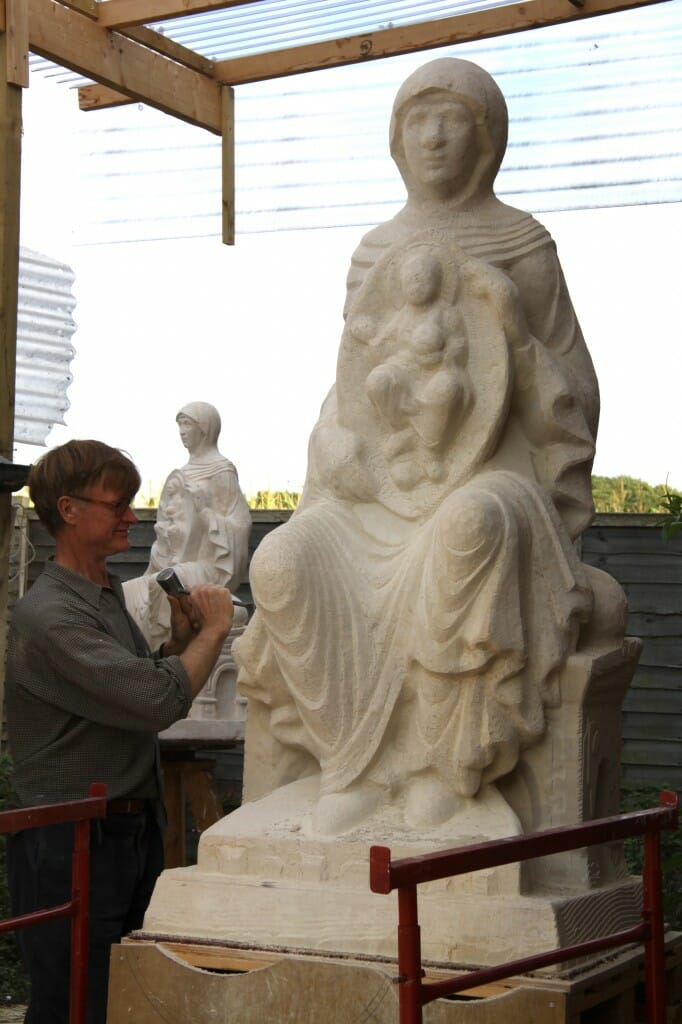 Hand carving the roughed out piece.

There are three main tools used in stone carving; the point, which blasts largish pieces off the block; the pointed claw, used for most of the modelling, followed by the flat claw; flat chisels, which refine and smooth the surface. We then brought this beautifully dense limestone to a polish using rubbing stones and then abrasive paper. 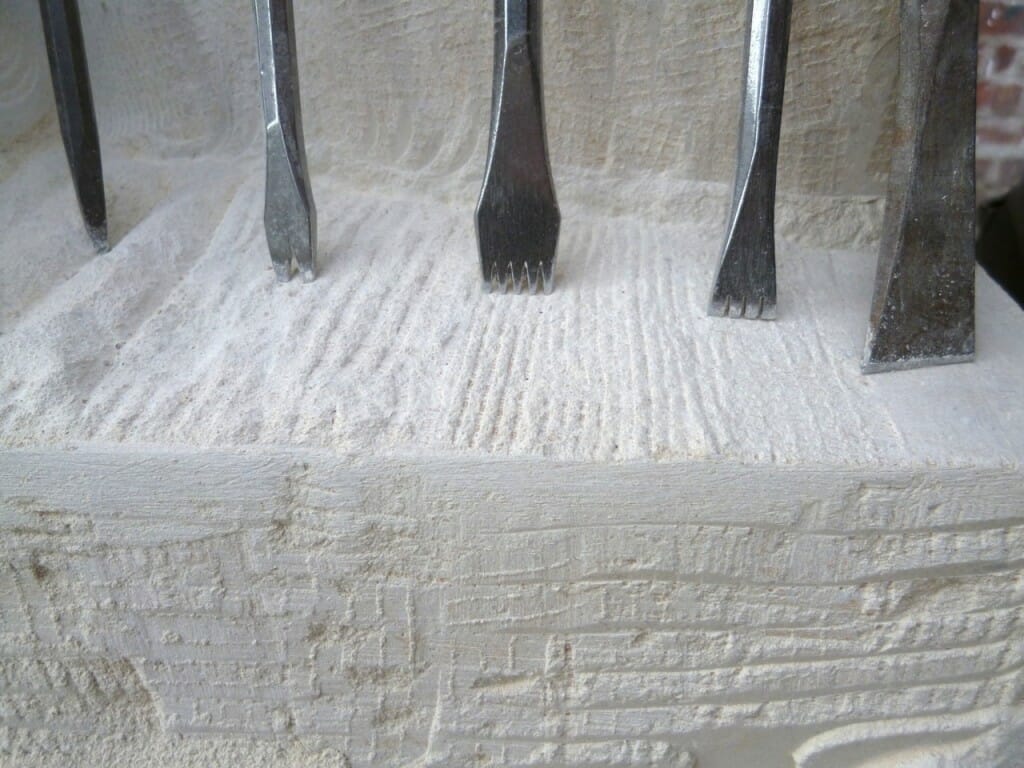 Stone chisels, shown in order of use with the marks they leave on the stone: point; deer’s foot point; pointed claw; flat claw; flat.

On May 13th the completed carving was delivered to the Cathedral, and from May 20th to 30th Martin, Susan Lee the gilder, and myself worked on the polychromy in situ. It was essential to colour and gild in the chapel itself so that we could finely tune the intensity of the colour and gilding for the given space, which has two large stained glass windows. It was also helpful to draw on other peoples’ reactions as work progressed. All along, this has been a communal labour and not the work of an isolated individual. I estimate that about fifty people have been involved on one way or the other, from lorry drivers and committee members through to the donors and us actual carvers. 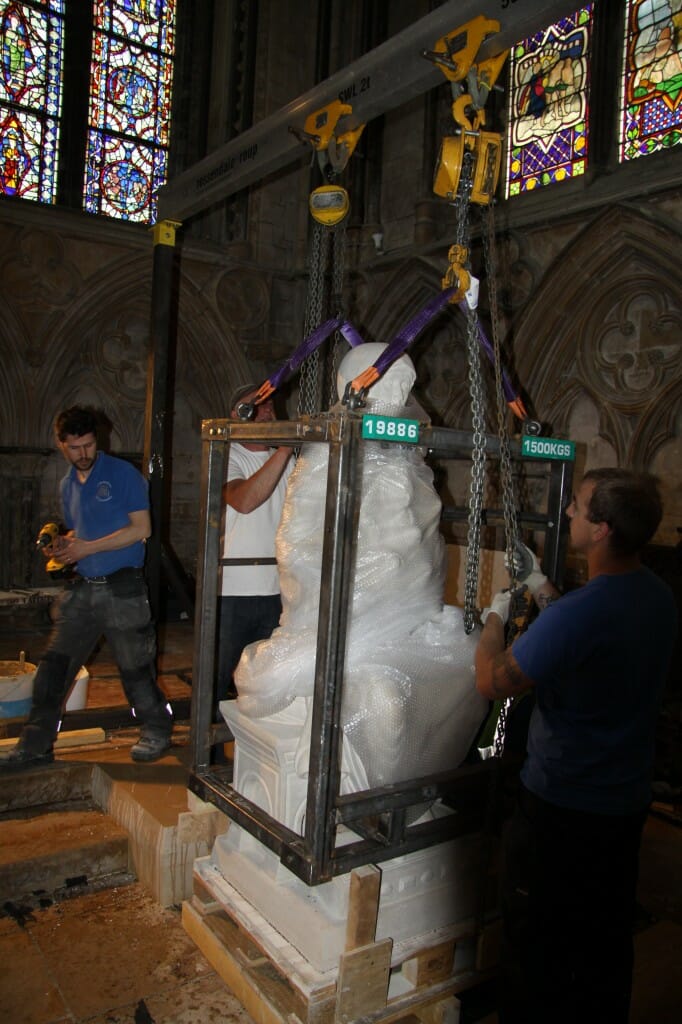 Installing the completed carving on its plinth. 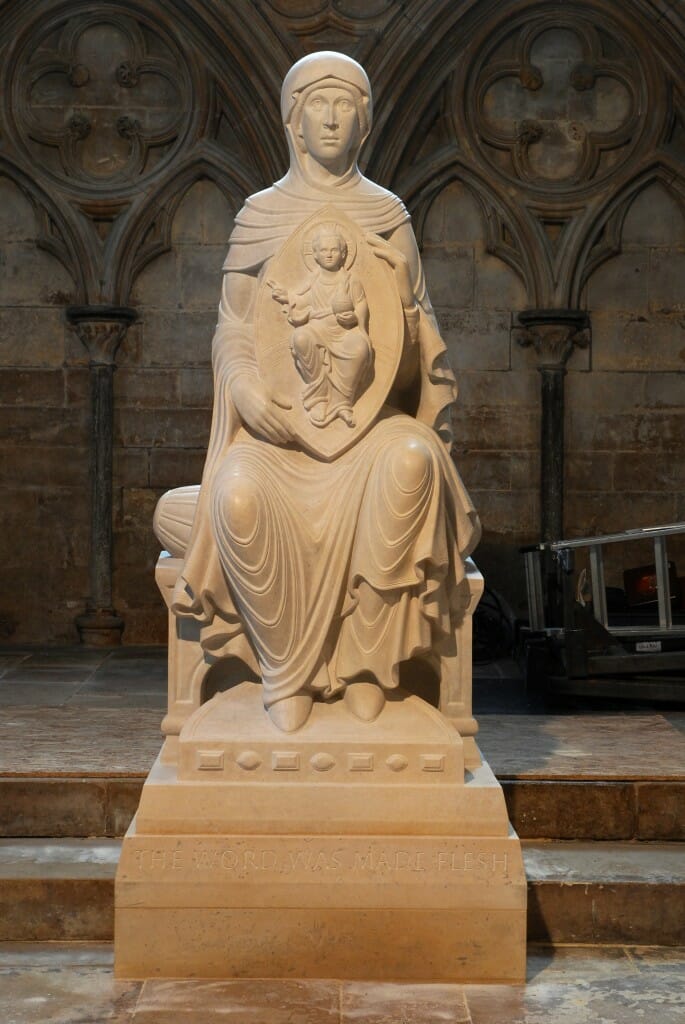 The completed carving before polychromy. 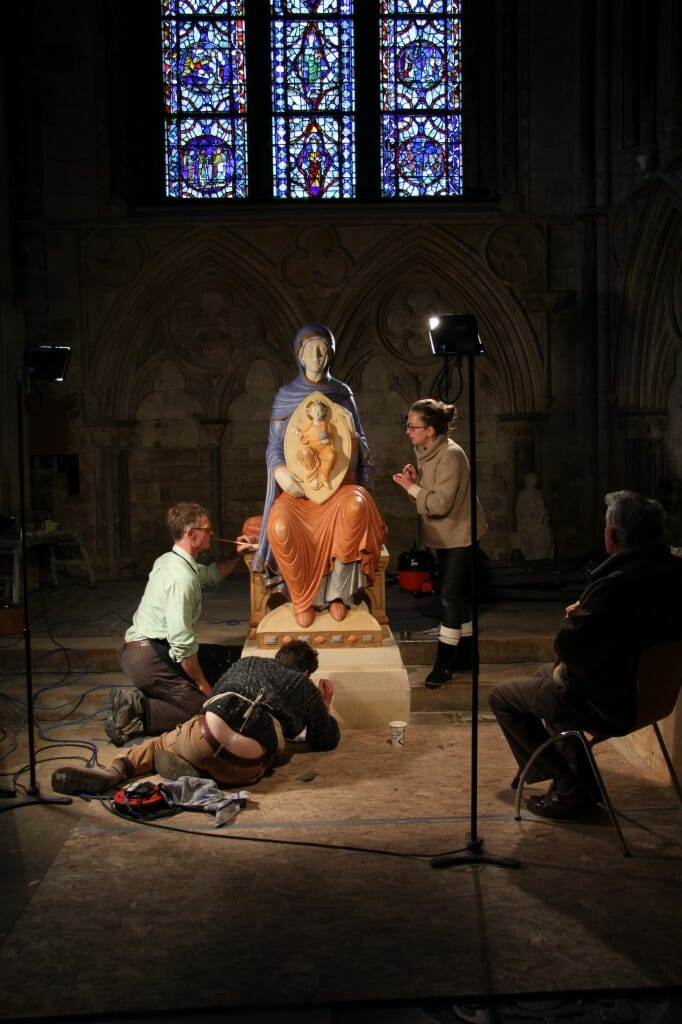 Polychroming and gilding the sculpture in situ.

The Cathedral committee and I had decided to polychrome for various reasons, the three main being to mark out the work as a liturgical object, not just as a work of art; to help to distinguish the work from the stone environs of the cathedral; and to add warmth. The guiding principle in all decisions was to make an icon that would draw people closer to God through a warm yet ascetic beauty. Britain has been aesthetically traumatised by the iconoclasm first of Henry VIII, and then of the Reformers under Oliver Cromwell in the 1640’s. In this sculpture we therefore wanted people to associate life in Christ with beauty. 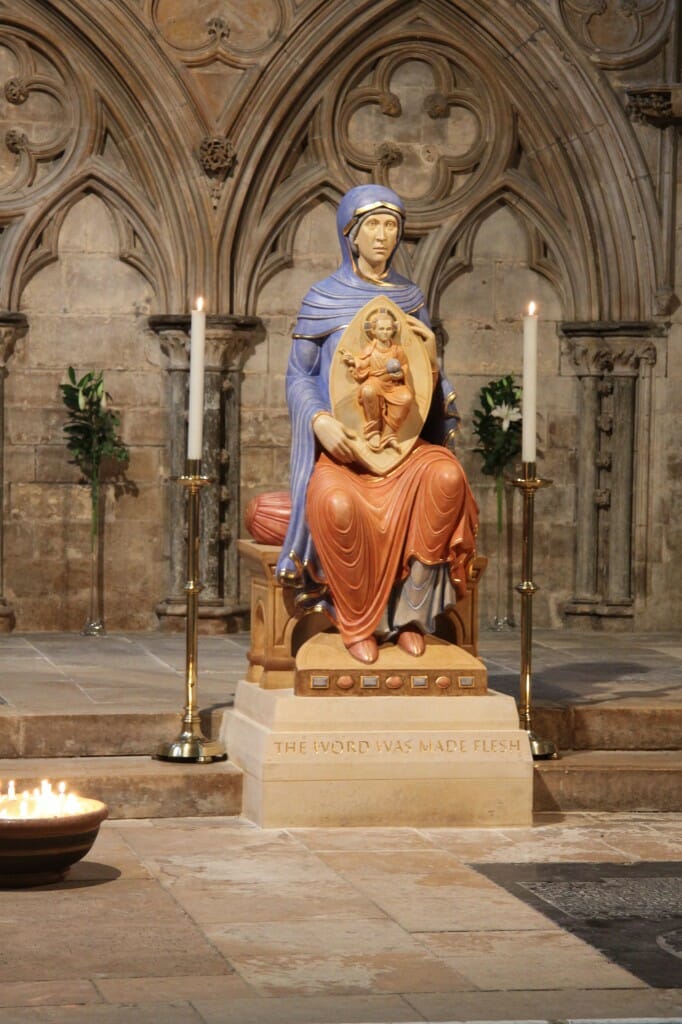 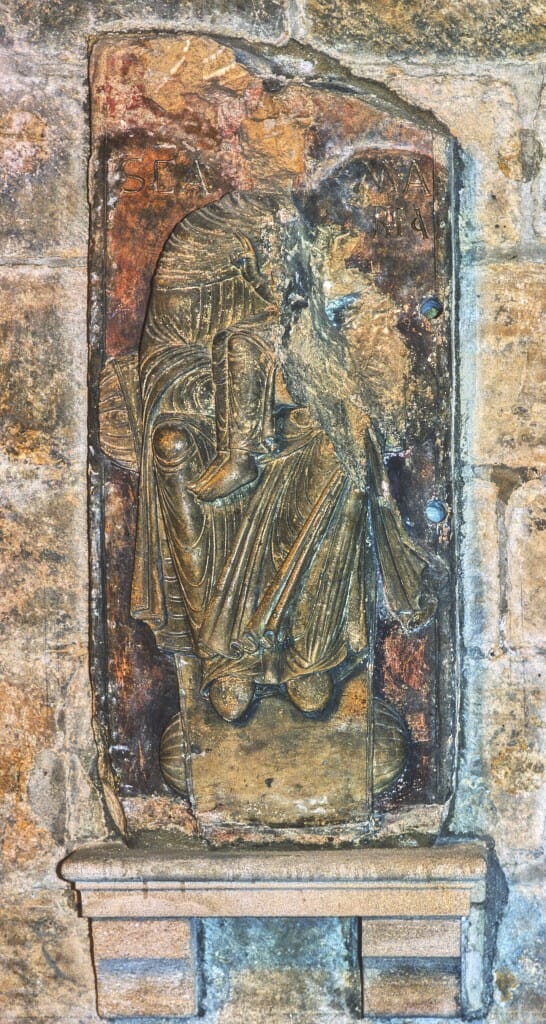 It was important that the stone be allowed to speak through the polychromy, and for the work to be tactile and invite people to touch. The medium chosen for the polychromy was egg tempera. Each layer was applied as a stain rather than a skin, and the high points rubbed back to expose the stone. Each area had up to eight layers of extremely dilute paint or egg glaze, followed by two sealant washes of natural casein. The blue pigment was the semi-precious stone azurite, while all the others were earths, particularly ochres and umbers. 23 1/2 cart gold leaf was then applied to details using oil gilding. More paint was left in the recesses to emphasise the form, especially the fluid lines of the drapery. 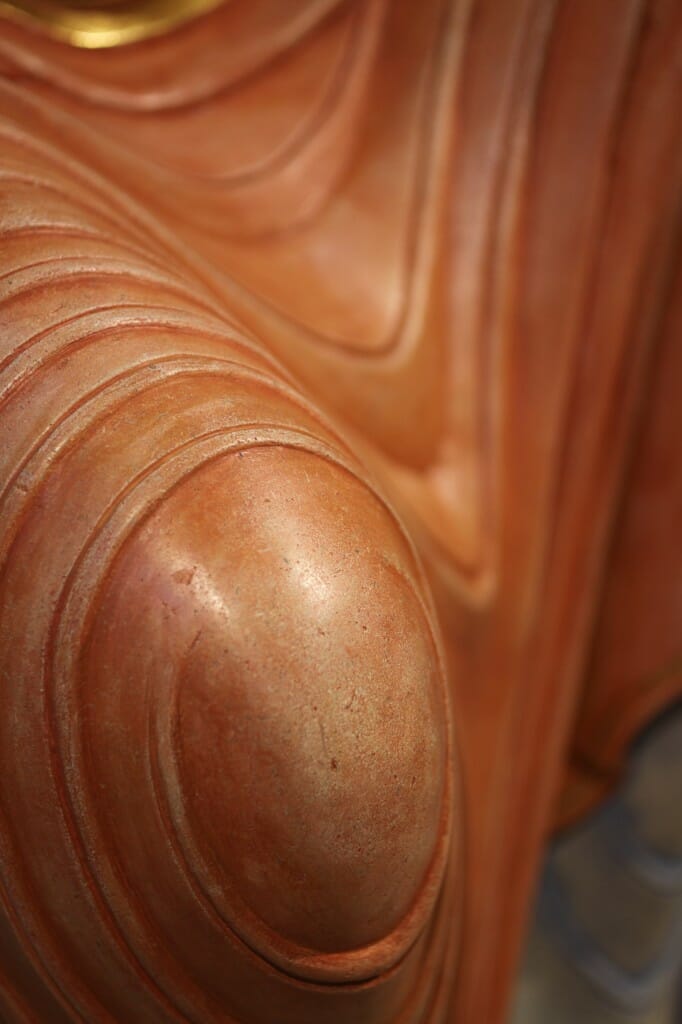 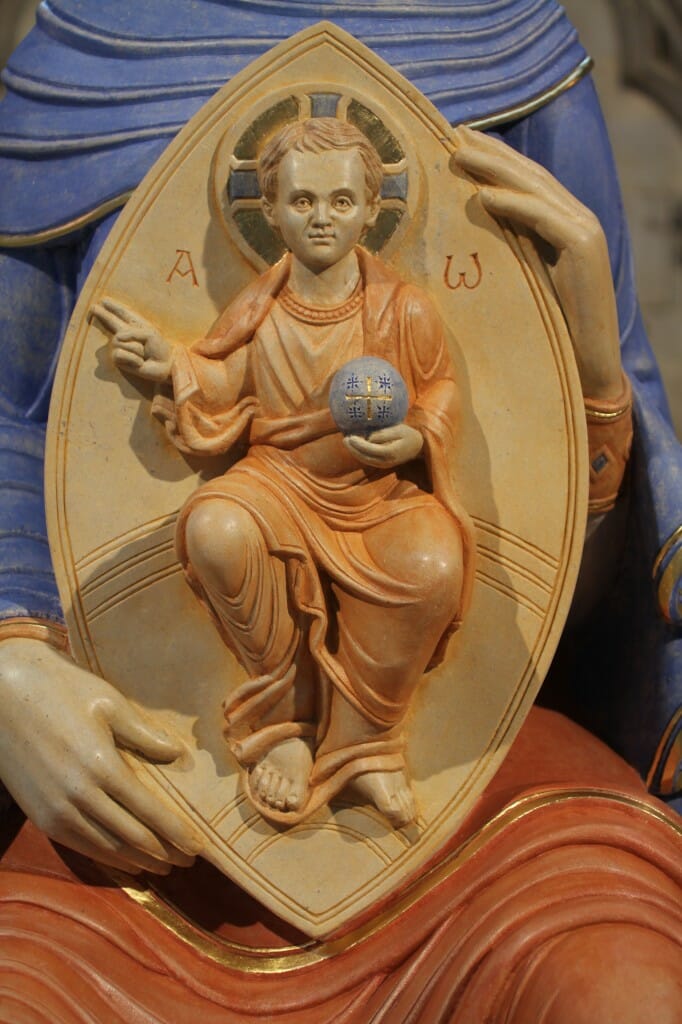 Detail, showing how dilute the finely ground egg tempera was. 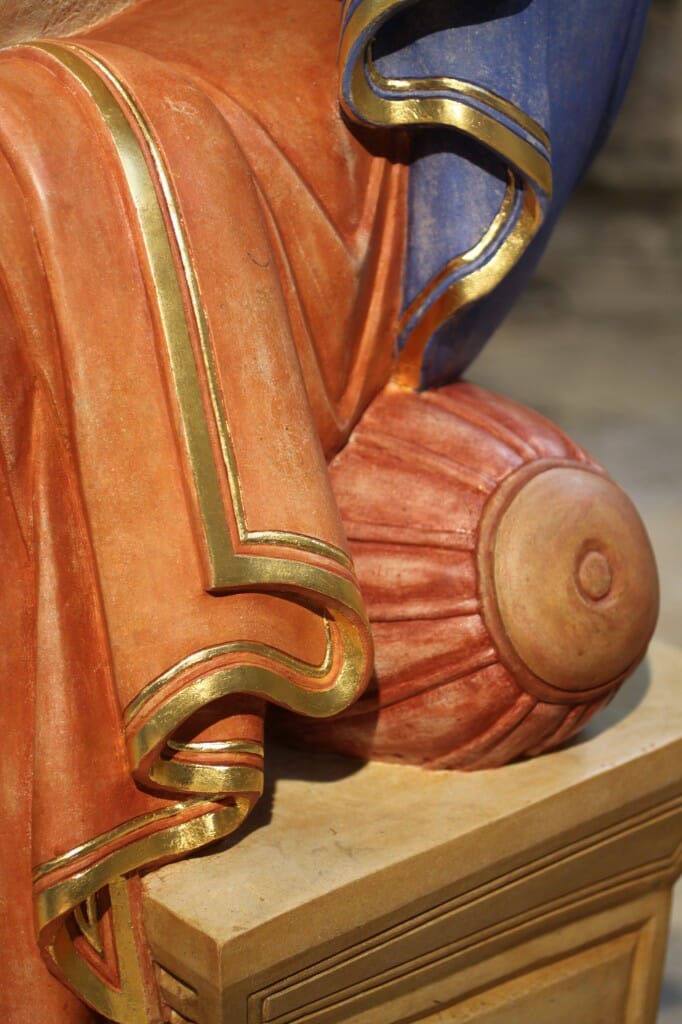 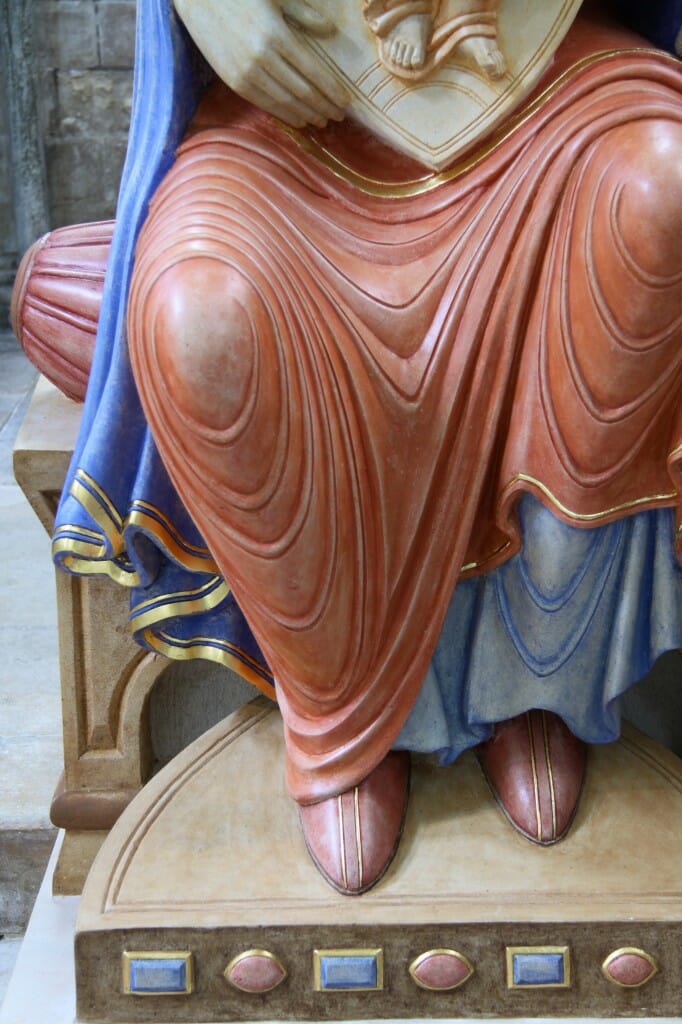 Detail showing the shadow effect created by leaving more pigment in the recesses than on the high areas.

Christ’s gaze engages the praying viewer directly, while the Mother of God’s is higher, towards the west end of the cathedral 146 metres (480 feet) away. Her distant gaze is also contemplating the deeper mysteries of the Incarnation. 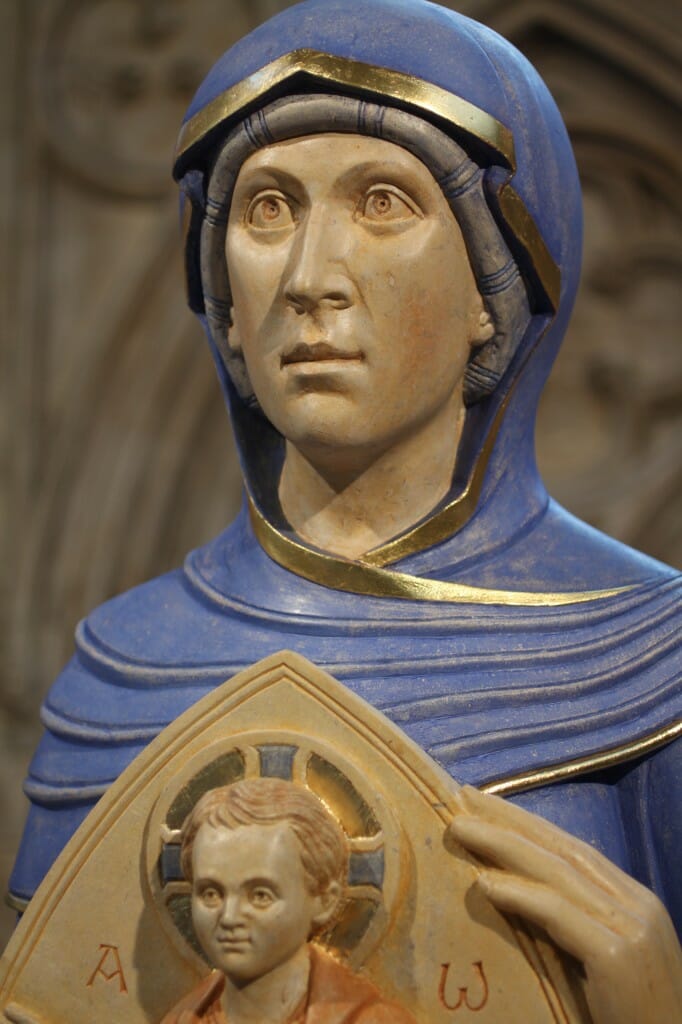 It has been quite an ecumenical project, with Roman Catholic parishes and individuals helping to fund it, an Orthodox designing and carving it with the help of his Catholic assistant, and it resting in an Anglican Cathedral. It is expected and prayed for that Our Lady of Lincoln will become a place of pilgrimage and prayer for Christians of many traditions.