Orthodox Architecture and Iconography as Subjects in Fine Art Painting 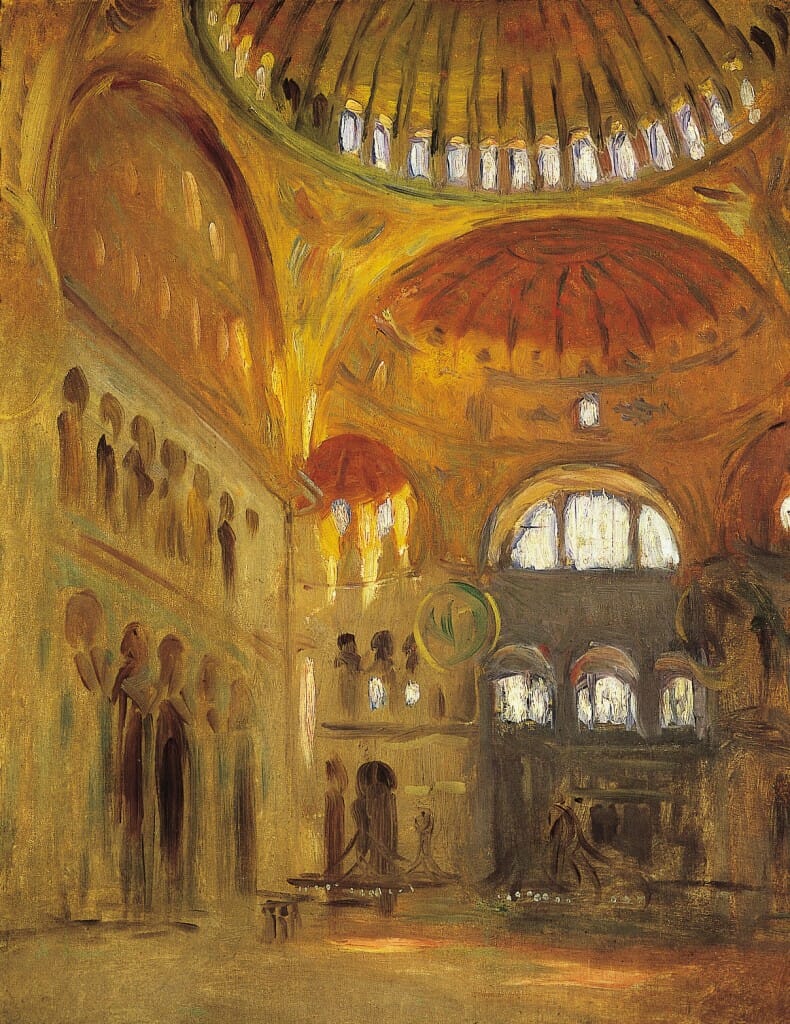 Interior of Hagia Sophia, by John Singer Sargent, 1891. This is arguably the best rendition of the interior of the Great Church ever made. It conveys the experience of transfigured matter embracing us from all sides, erasing all doubt in the Glory of God. It shows golden light so substantial that it seems like the very air we would breath in the New Jerusalem. I have never seen a photograph that did not fail where this painting succeeds.

Orthodox liturgical artists treat the vast world of secular fine art with some trepidation. The question of fine art influence on iconography, in particular, is a very delicate one. Western painting styles have done great harm to iconography historically. The reverse is arguably true as well. The ‘discovery’ of medieval painting inspired western art into the abysses of cubist abstraction. On the other hand, we can identify good influences as well. Those modern painters opened the world’s eyes to medieval iconography and set the stage for its revival.

But today I would like to share a very different genre of paintings – those which depict Orthodox art as their subject, honestly and in the natural style of the painter. These are not paintings ‘influenced’ by Orthodox art, but paintings which happen to depict it. For the painter, the choice of subject was often merely an accident of time and place – a week to spend in Istanbul painting – why not Hagia Sophia?

Such paintings are quite rare. Orthodox churches have never been a frequent subject for fine artists, being far off the beaten path of 19th-century travelers. But those that we have, which were painted by the best of western artists, have rather a lot of beauty to offer us. It is the chief virtue of naturalistic painting that it shows material things not with the uniform realism of a photograph, but as we truly perceive them with our senses. A great painter finds the most precious and distinctive beauty in a subject, refines and emphasizes it, and thereby depicts its visual ethos.

The works of John Singer Sargent (1856-1925), in particular, reveal an extraordinary sensitivity to the unique beauty of Byzantine churches. His paintings impart the experience of those churches infinitely better than any photograph. And because that visual experience is inescapably holy, the paintings themselves have a prayerful beauty. They are valuable in that they show us things that do not lend themselves to words – the subtle luster of worn marble, the fiery flash of a sunbeam on gold tesserae, the ponderous quiet of an empty church in the early morning. It is hard to talk about these things the way we can talk about architectural form or iconographic programs. But it is this subtle beauty of real materiality that makes Orthodox art truly transfiguring. Architectural designs and iconological concepts do not ultimately matter if their material expression does not arrest us with beauty. These paintings show us that moment of conversion, when an outside visitor experiences a moment of atmospheric perfection in an ancient church, and suddenly sees the transfiguration of matter into something holy.

I have included here a number of paintings I have encountered over the years which I especially enjoy. 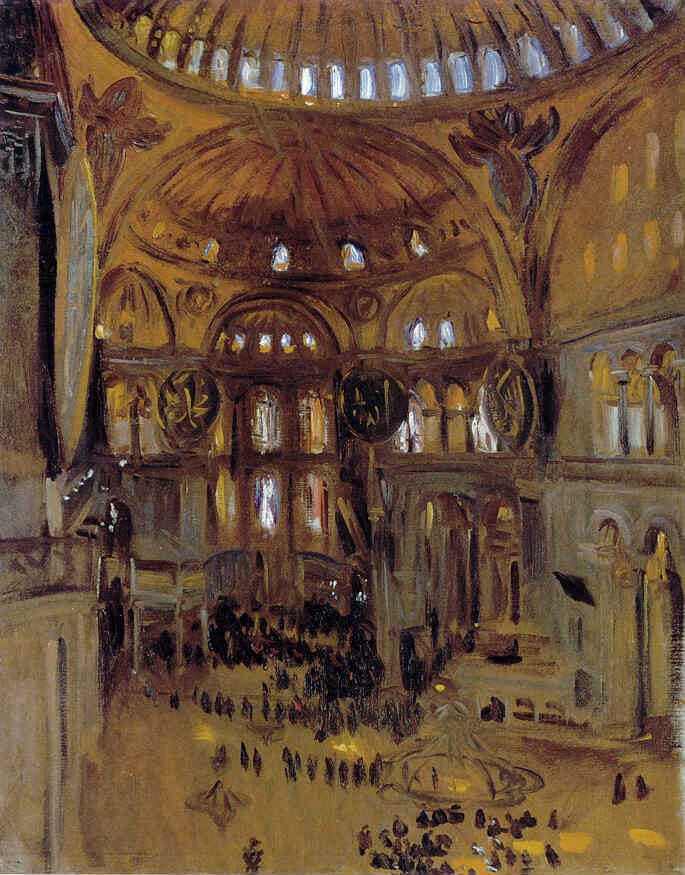 Sketch of Hagia Sophia, by John Singer Sargent, 1891. Unlike the above painting, which shows a church still and silent bursting with brilliant light, this sketch shows the bustle of mid-day, the sunbeams and the people as though dancing together on a ballroom floor. 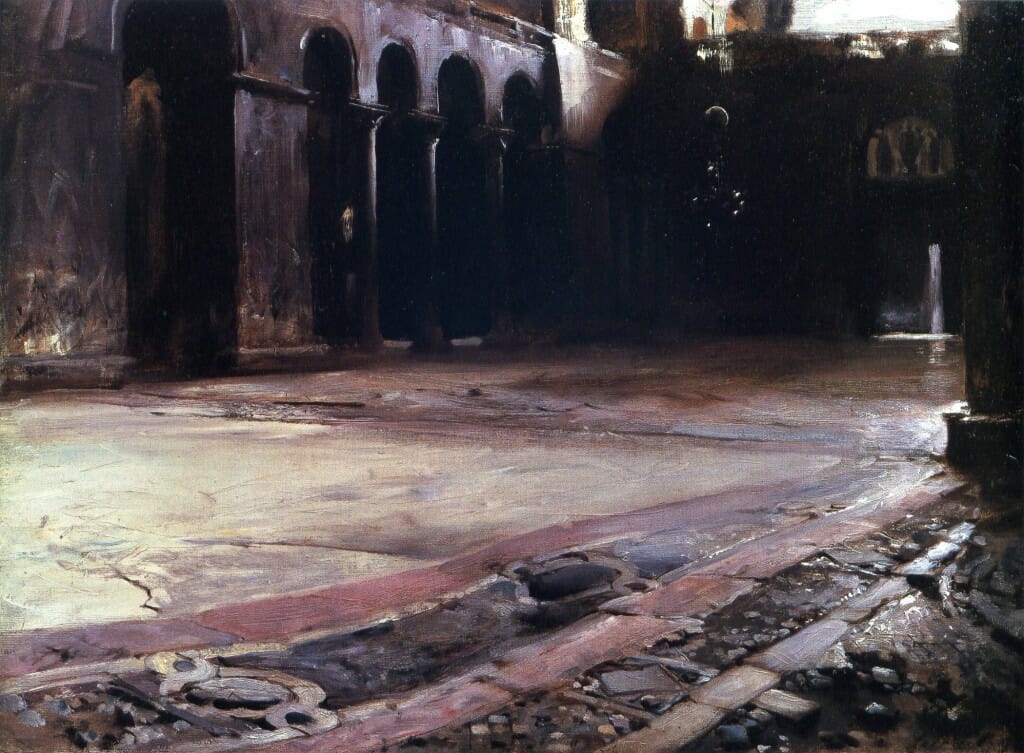 Pavement in San Marco, Venice, by John Singer Sargent, c.1880-1882. The mosaic pavement of San Marco is one of the great sights of the world – as immense and wavy as the ocean itself. It was the subject of famous debates among Victorian preservationists, who argued that it may have actually been built un-flat to better represent the mystical sea. Here Sargent focuses on the ancient pavement reflecting cold morning light, and truly it looks like a harbor surrounded by high Byzantine walls – or perhaps the river of the Waters of Life flowing out from the New Jerusalem. 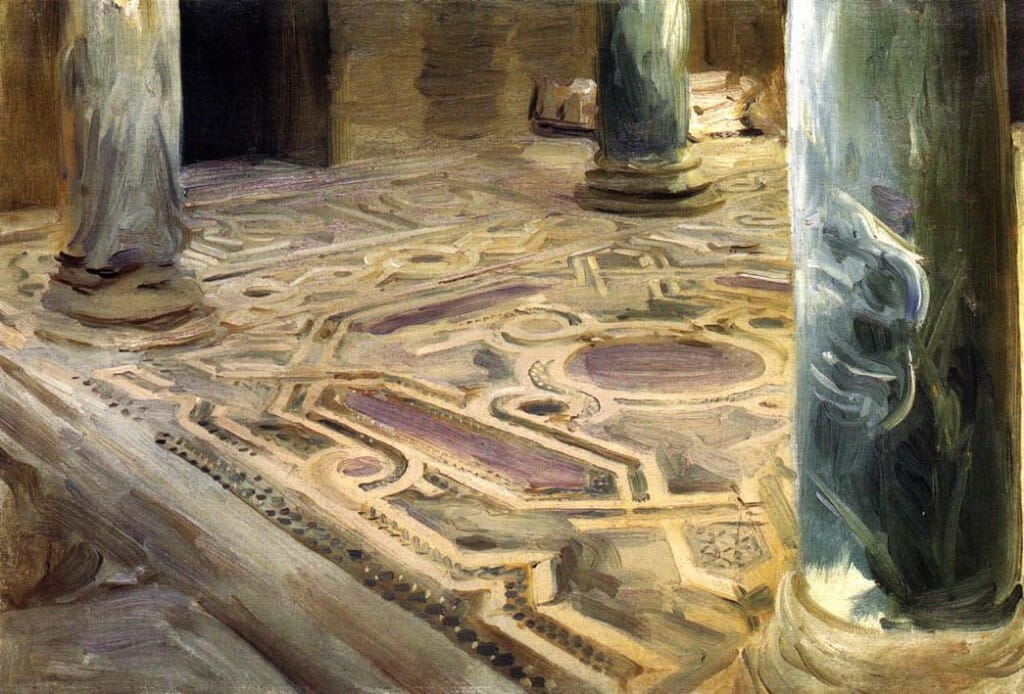 Pavement in the Church of San Cataldo, Palermo, Sicily, by John Singer Sargent, 1897 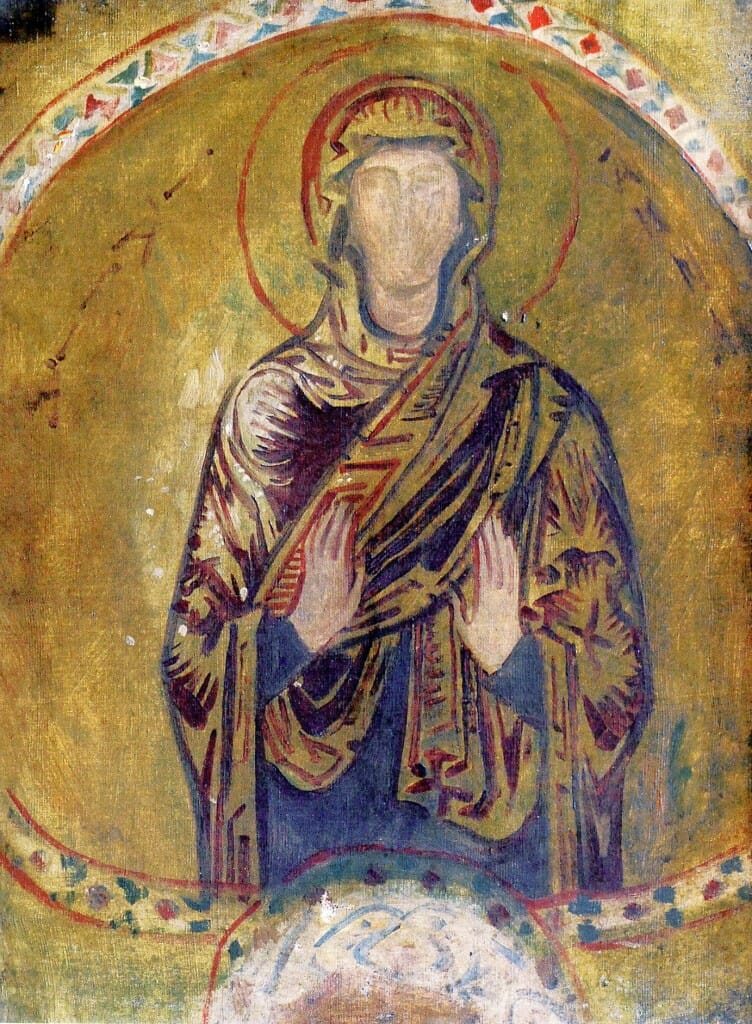 Mosaic of Saint Anne in the church of Santa Maria dell’Ammiraglio, Palermo, Sicily, by John Singer Sargent, 1897. Here Sargent seems captivated by the intricate geometries of the gold highlights on the robes. 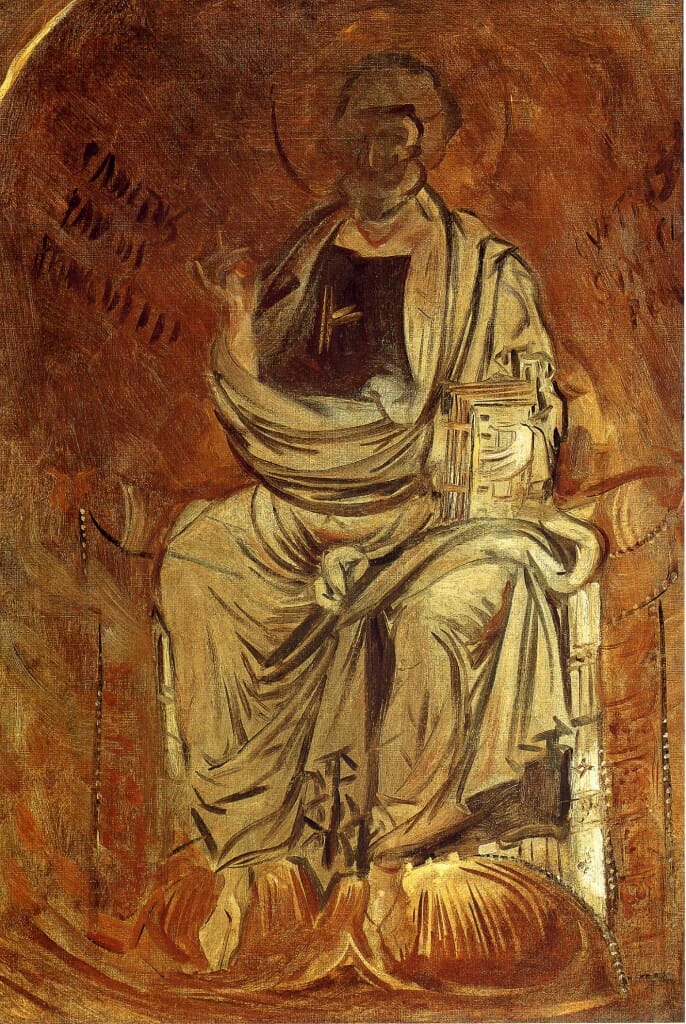 Mosaic of Saint Peter in the Cathedral of Monreal, Sicily, by John Singer Sargent, 1897. 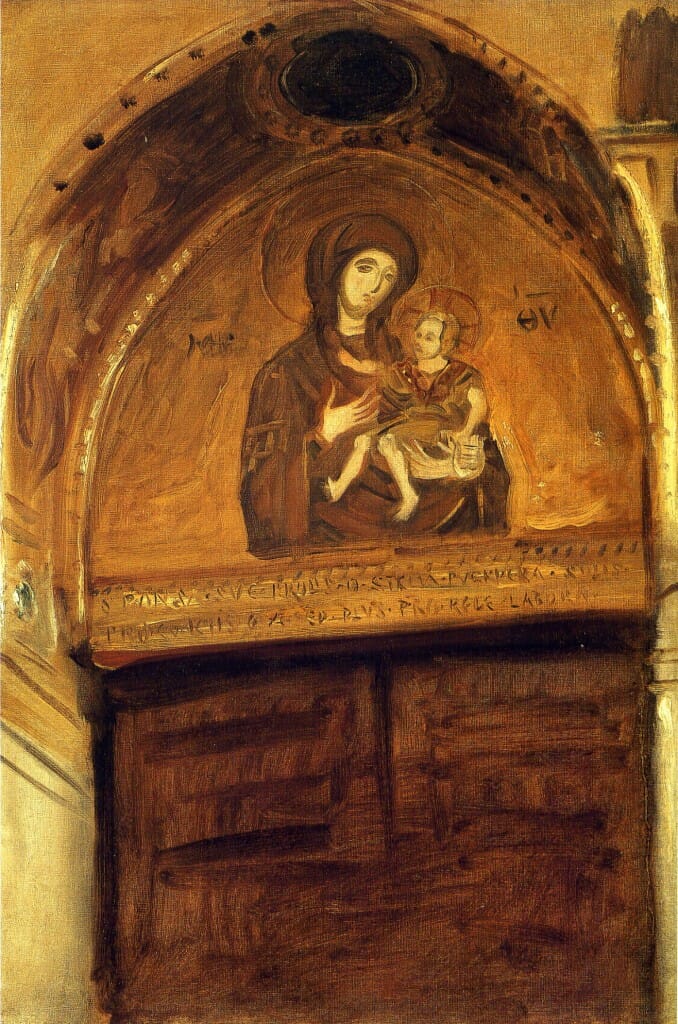 Mosaic of the Theotokos in the Cathedral of Monreal, Sicily, by John Singer Sargent, 1897. 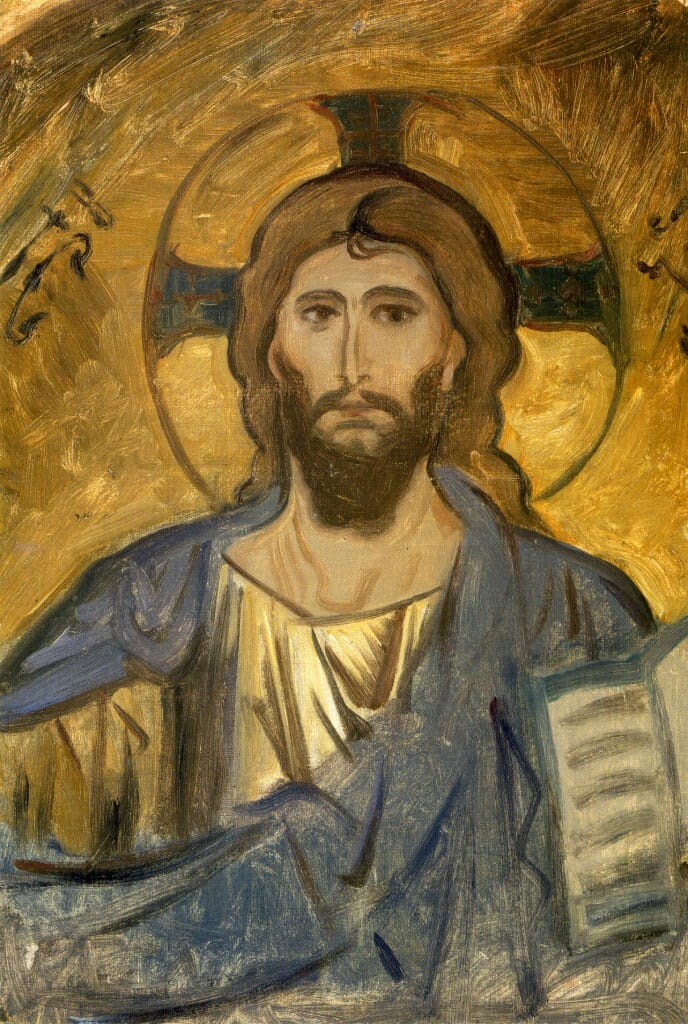 Mosaic of Christ Pantocrator in the Cathedral of Monreal, Sicily, by John Singer Sargent, 1897. This is one of Sargent’s most unusual paintings. Unlike his other paintings of mosaics, here he focuses on the face, making his painting itself almost an icon. The face is immensely beautiful and sensitive, probably even more so than the original mosaic (shown below). And the intense glow from the gold highlight on Christ’s robe conveys an extraordinary divine warmth glowing from within. 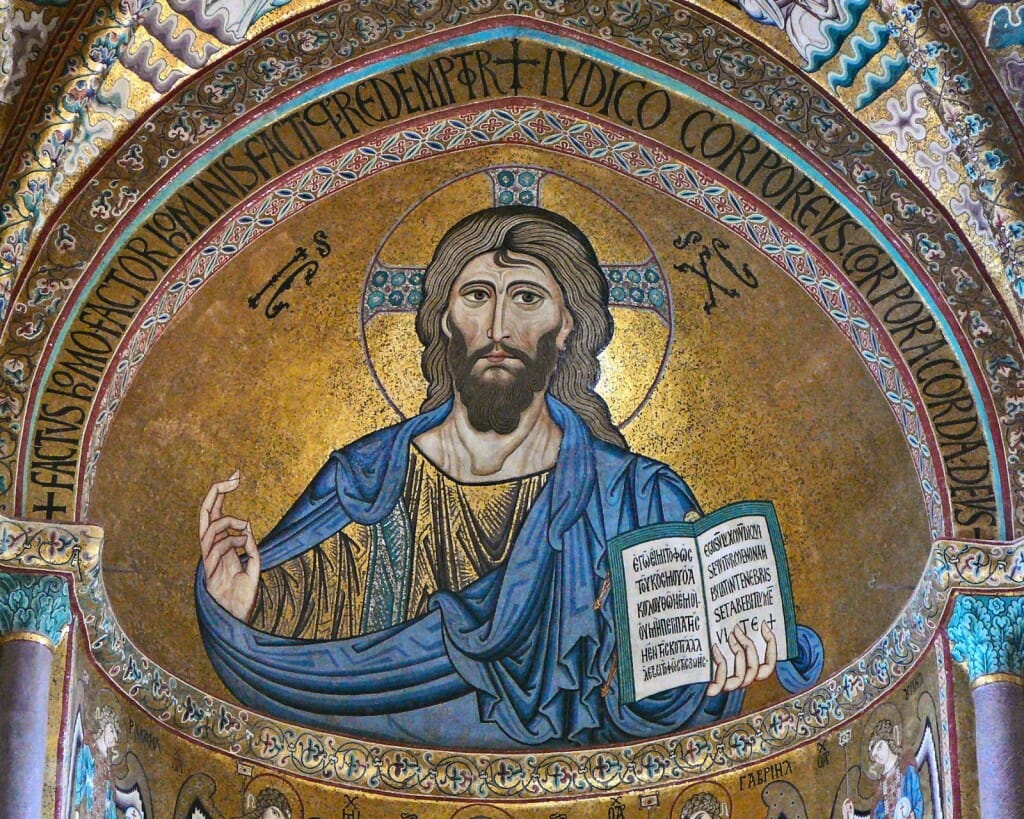 Mosaic of Christ Pantocrator in Monreal Cathedral, Sicily. The mosaic was made by Greek artisans working for the Norman king of Sicily in the 1180s. 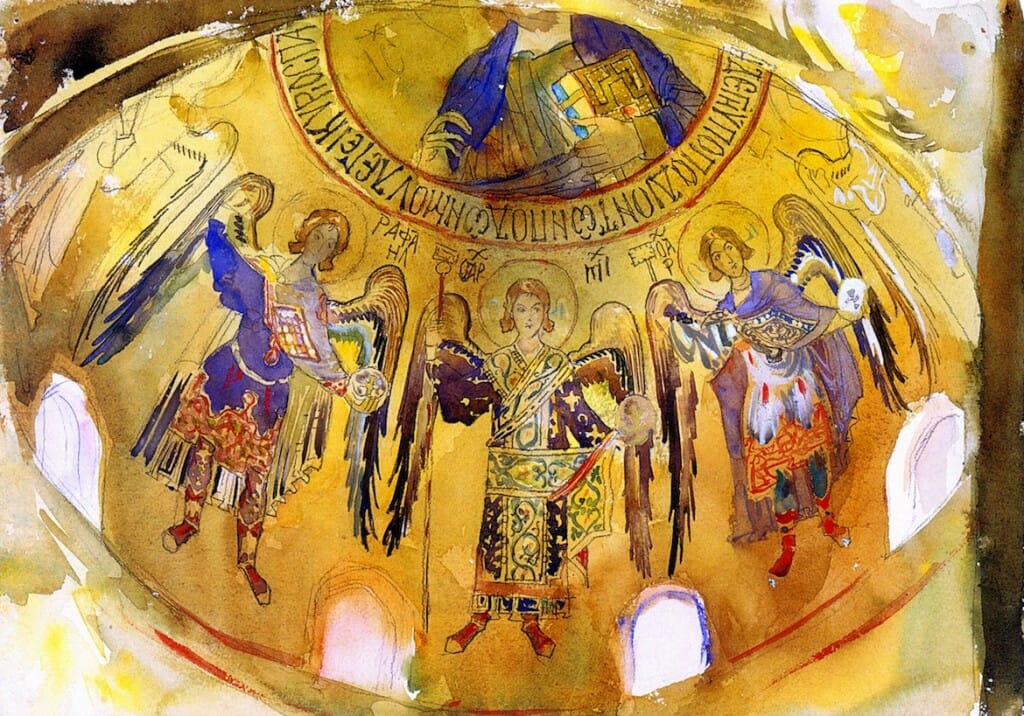 Dome mosaics in the Palatine Chapel, Sicily, by John Singer Sargent, 1897. A spectacular rendition of the richness of gold mosaic rendered in watercolor. 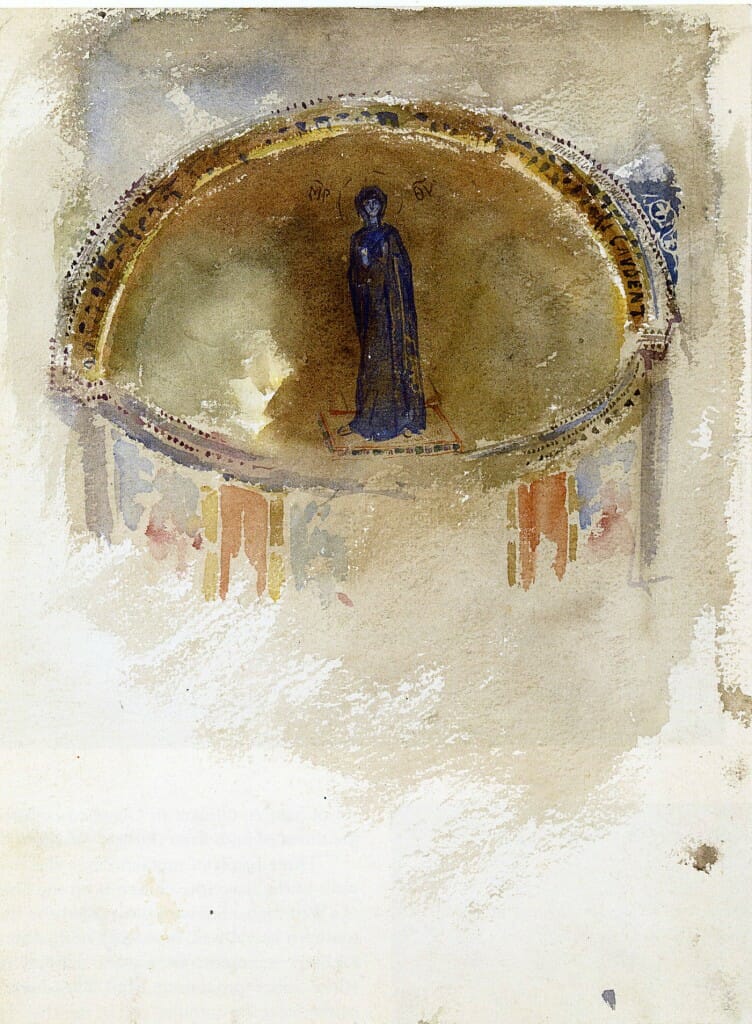 The mosaic of the Theotokos in the Church of Sts. Maria and Donato, Murano. Watercolor by John Singer Sargent, 1898. 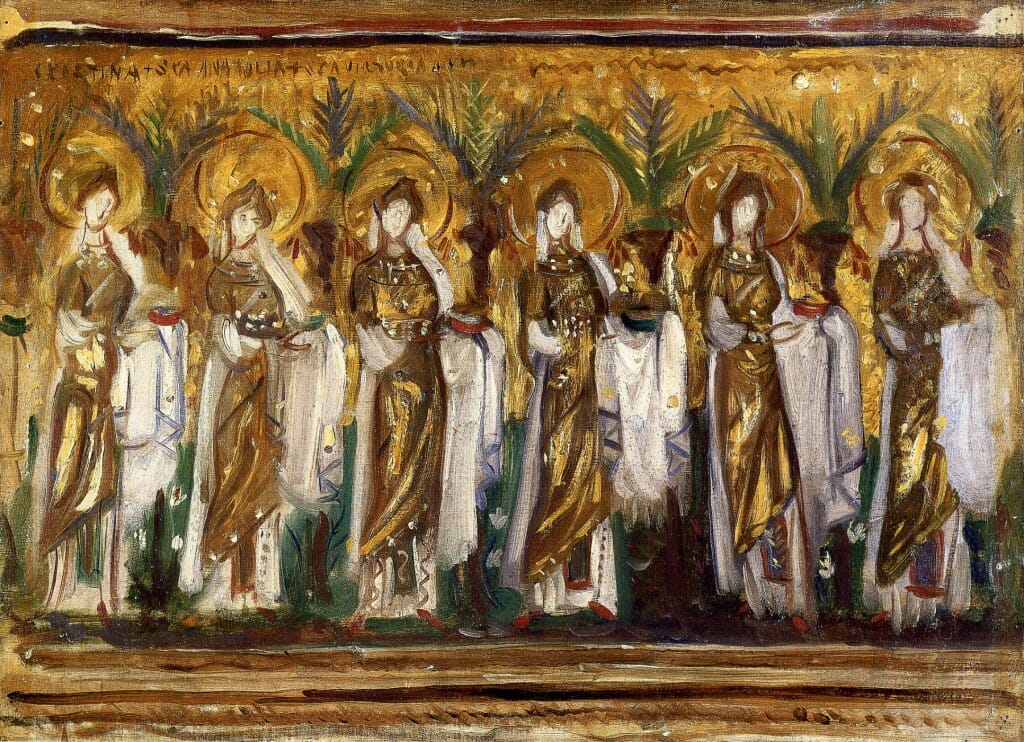 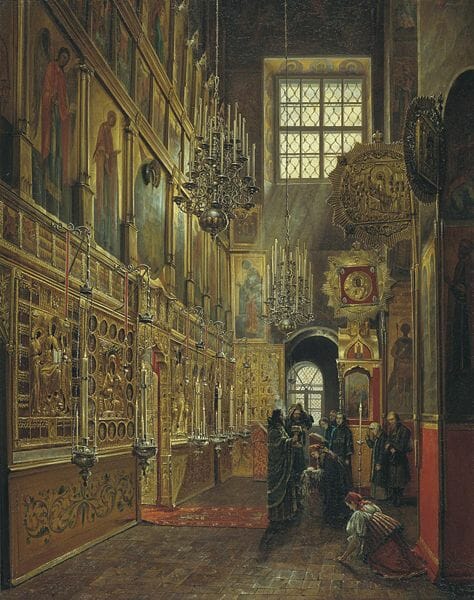 Church of St. Alexis in the Chudov Monastery, Moscow. Painted by Stepan Shukhvostov in 1866. This is a good example of an earlier style of painting, crisp and neoclassical. It does not capture atmospherics as well as Sargent, but it nicely emphasizes the intricacy and precision of the iconostasis woodwork. 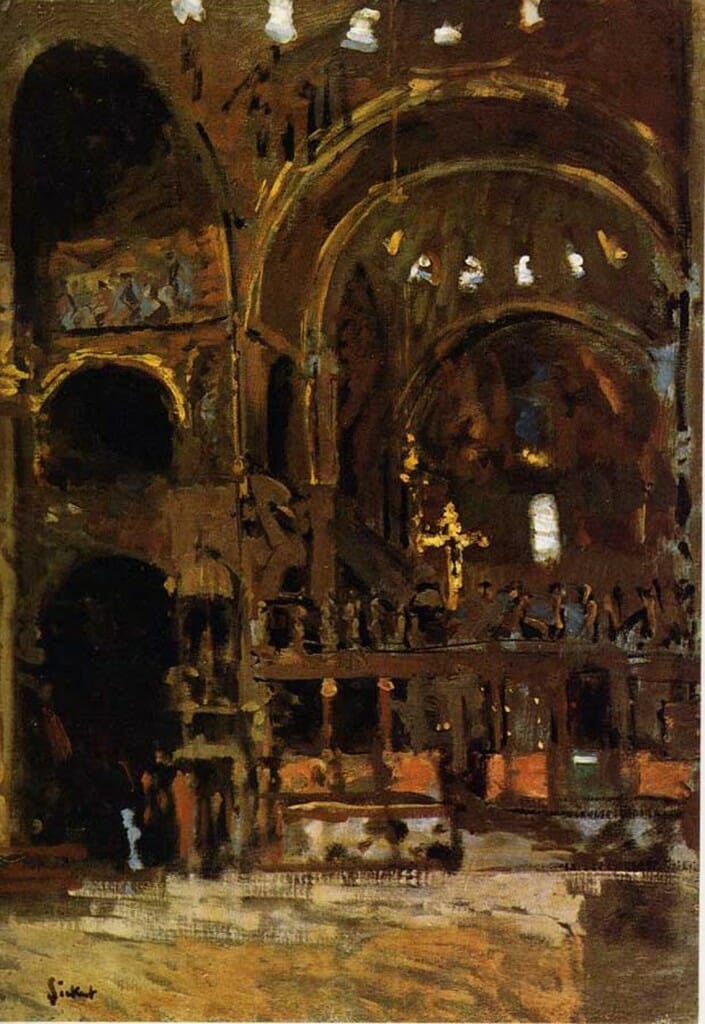 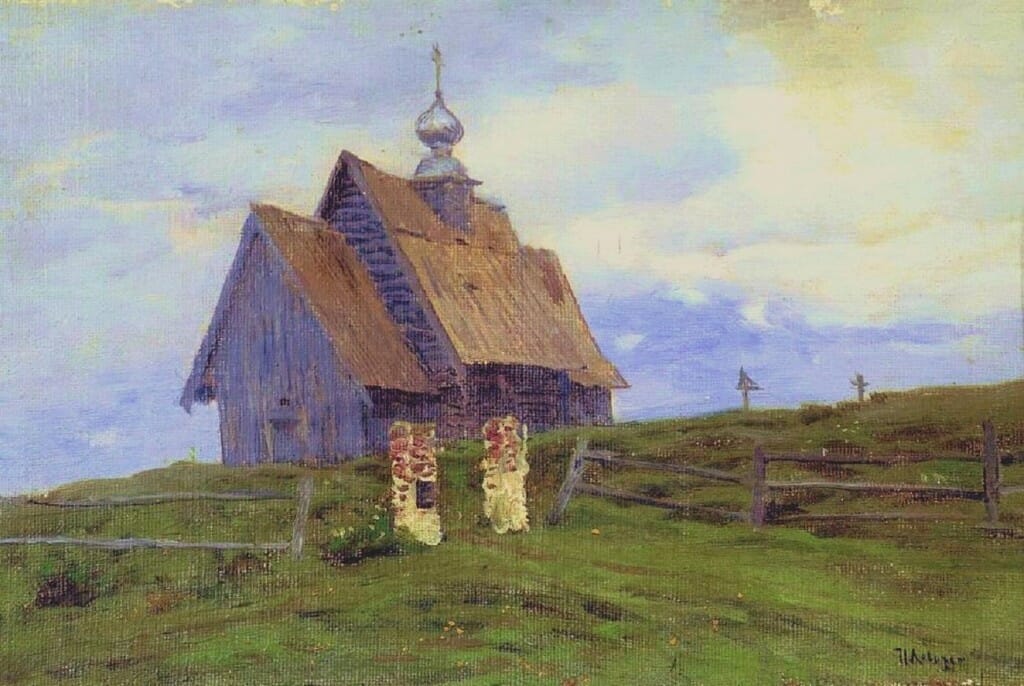 Church in Plyos, by Isaak Levitan, 1888. The Russian impressionists focused on the beauty of churches as objects in the landscape. This village church seems to sprout out of the field like a mushroom, delicate and organic, a natural feature in the landscape of Holy Russia. 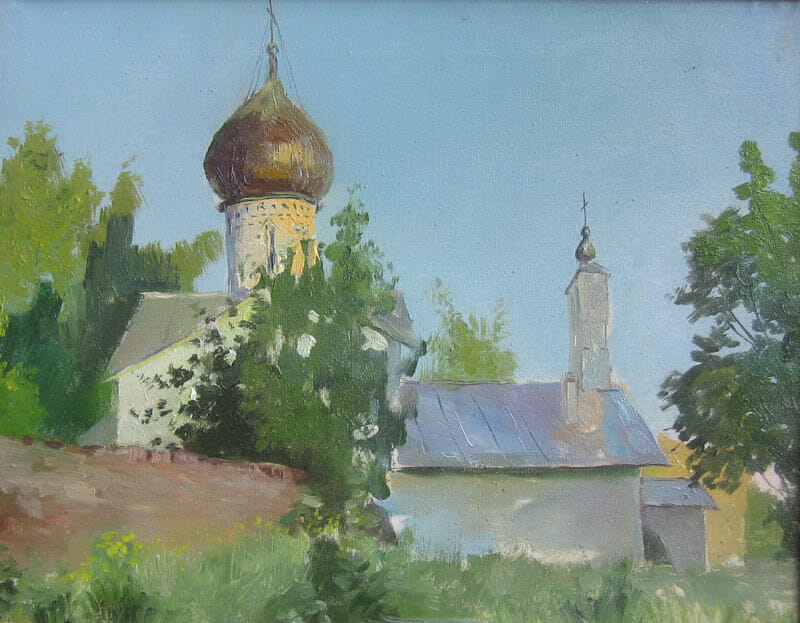 The tradition of Russian Impressionism continues to this day. This painting was done recently by A. Osipov, a student at the Repin Institute in Russia. 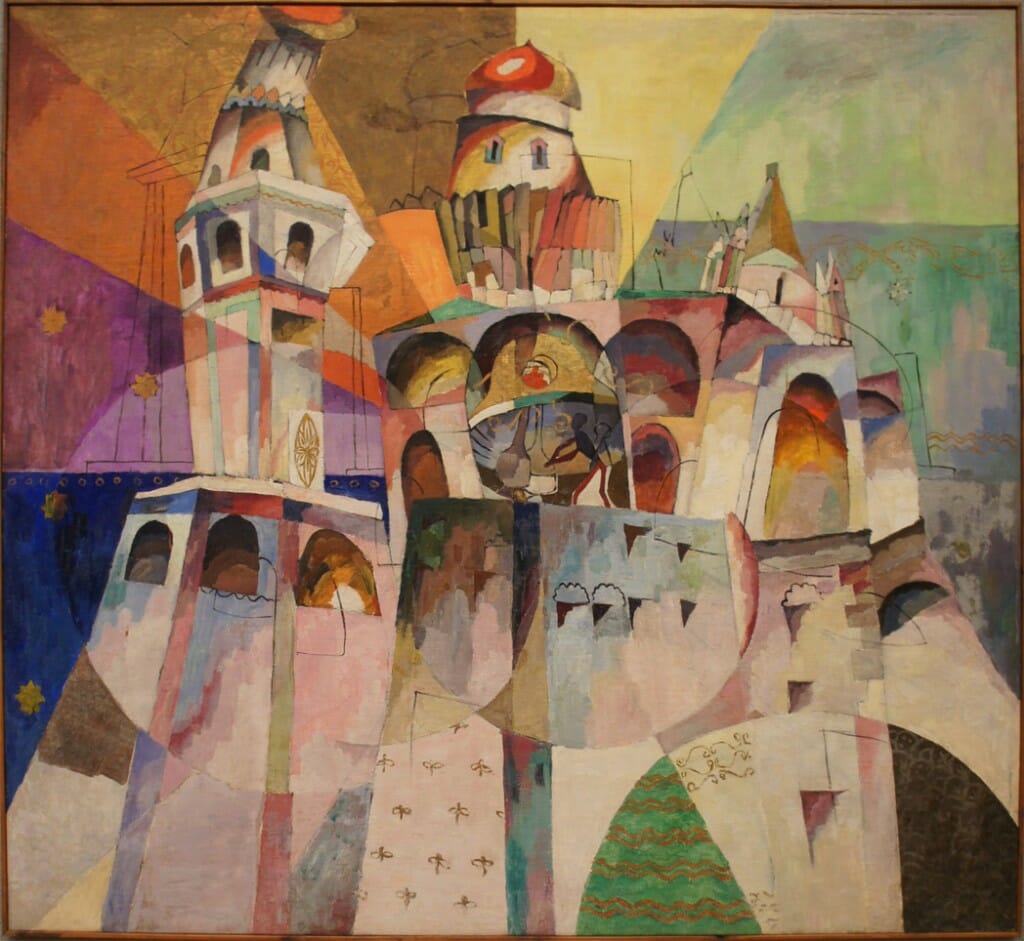 The 20th century brought fascination with abstraction and expression in painting. This 1915 painting of the Ivan the Great Bell Tower expresses the power of a great peal of bells. By Aristarkh Lentulov. 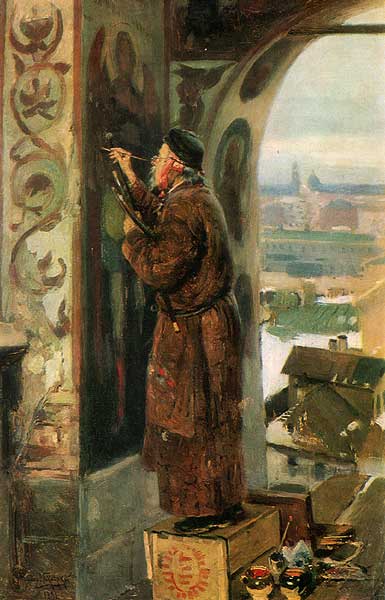 A fascinating painting of an iconographer at work, by Valdimir Makovsky, 1891.

A contemporary painting of iconographer’s studio on Mount Athos. By Aleksei Evstigeniev, 1997.