Today I would like to call attention to marble revetments, meaning the decorative marble paneling that clads the lower walls of a Byzantine church. It is impossible to overstate the architectural importance of revetments. In the grander Byzantine churches, the marbles covered most of the interior surface, dominating the visual experience of the church far more than the iconography. Indeed, the grandest of all churches, Hagia Sophia, was originally built with no iconography. The vaults bore mosaic designs in gold and azure depicting stars and crosses. But the walls were wholly clad in the most magnificent marbles in the world, brought from all corners of the Roman Empire, and it was principally these marbles that expressed the beauty of the Kingdom of God. 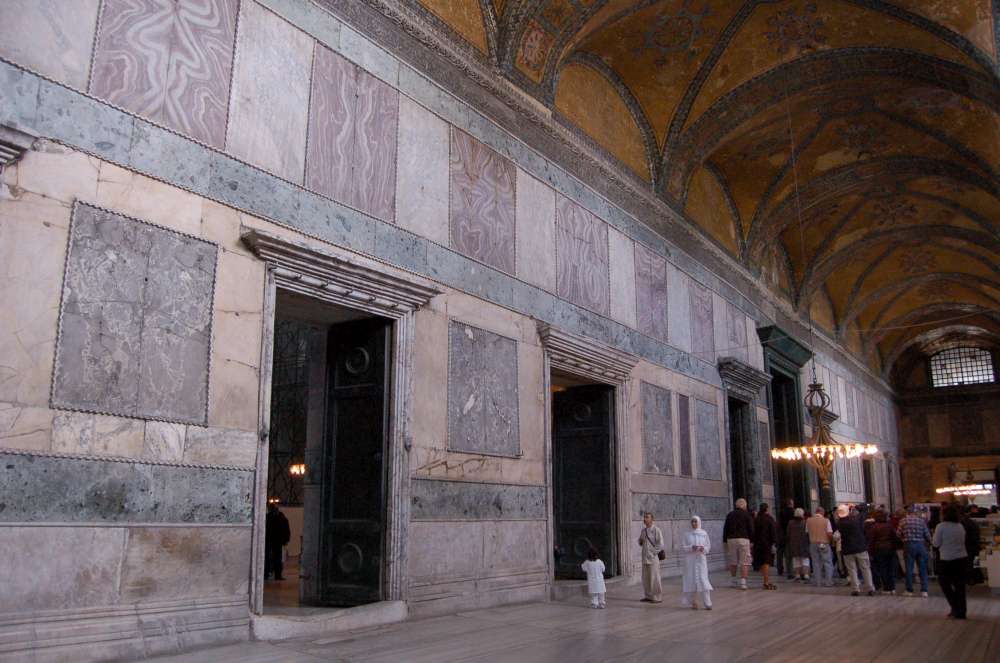 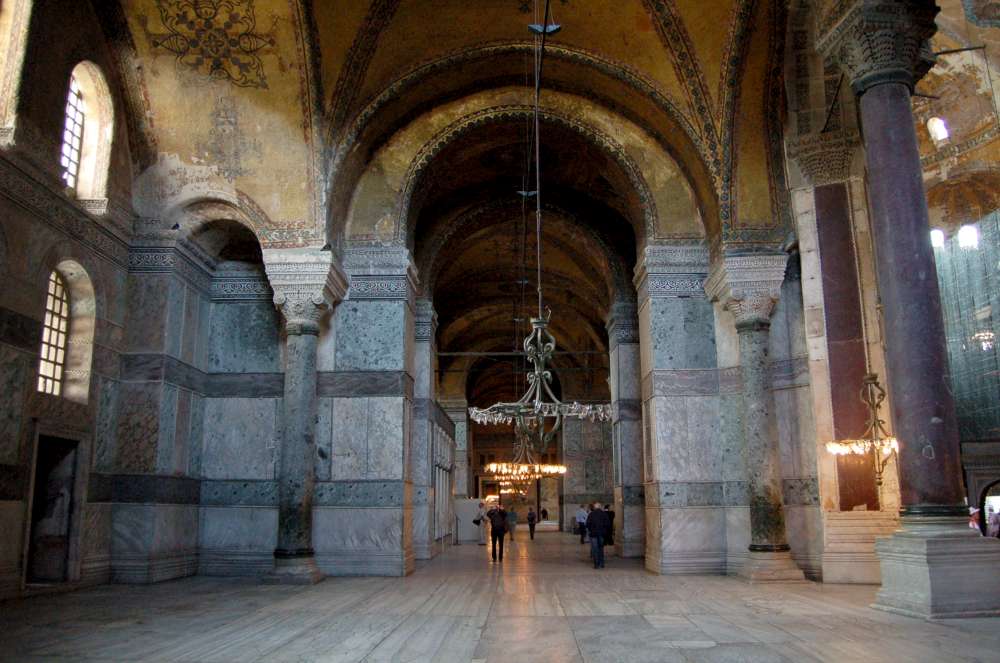 Marble revetments were a refined art well before Christianity. Every Roman building of importance was so adorned. One rare example to survive intact is the magnificent Pantheon in Rome. Earlier Roman examples would be described by architects as ‘tectonic’, meaning that they typically express the structural characteristics of the building by including flattened representations of columns and lintels. Byzantine revetments became more and more ‘atectonic’ over time, and the most beautiful medieval revetments look like carpets – purely abstract compositions that show off the natural beauty of the marble. There is no hint of up or down to the design, no suggestion that the marble must bear the weight of the building. 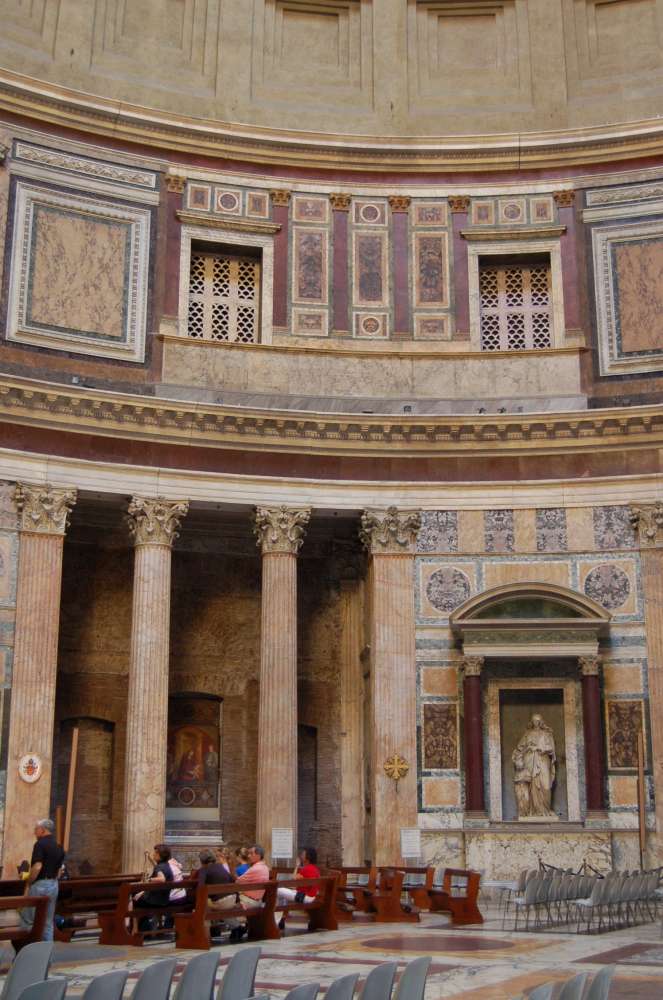 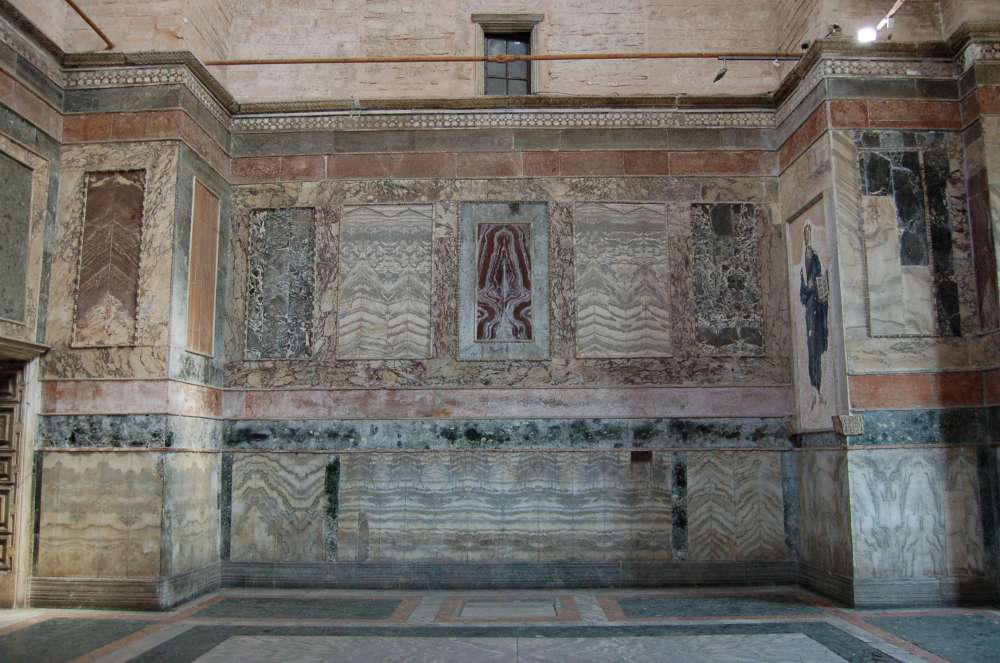 Considering their immense cost at the time, the revetments must have meant a great deal to the ancient builders. The word itself is significant, as it is the same word as ‘vestment’. Thus the temple is literally vested to show honor to the sacramental mysteries. There is also a connection with the New Jerusalem as described in Revelation. Saint John describes the city as having twelve foundations of precious stones. Nowadays we tend to think of a church building representing the Kingdom of God by means of iconography – depicting the saints who dwell there. But in earlier times the New Jerusalem was represented more directly – the temple was built to literally resemble a city with gemstone foundations.

But perhaps most important to their builders was the extreme rarity and antiquity of the marbles. At the height of Imperial Rome, the precious stones were brought from the distant corners of the world. The rarest of all was Imperial Porphyry, a hard purple stone found only in one remote spot deep in the Eastern Desert of Egypt. Even the Empire in all her strength could manage to quarry this stone only briefly in the time of Nero. By the reign of Justinian, nearly all the Imperial quarries had been closed for centuries. Rome was dismantled to build Constantinople, and the monuments of Constantine dismantled to build those of Justinian, and so on for a millennium. The marbles were always re-used with immense care, for they could never be replaced. They represented a connection to Imperial greatness, authority, and history that money could not buy. Even that last stronghold of Byzantium, the fortress-city of Mystra built in the Peleponese in the 14th century, included a church with a marble revetment, no doubt made of slabs quarried fifteen hundred years before.

Byzantium’s conquerors coveted these marbles above even gold. Huge amounts of revetment were carried off to Venice and adorn St. Mark’s basilica to this day. Most of what remained was salvaged by the Turks and decorates the mosques and palaces of Istanbul. The same practice occurred in Rome. Charlemagne took marbles from Rome to give a revetment to his palatine chapel in Aachen. And the Romans themselves plundered what was left of their ruins to build the magnificent marble interiors of their baroque churches in the seventeenth century.

Indeed, to this day the Roman Catholic Church frequently builds churches with marble interiors, whereas this practice has largely been supplanted by iconography in the Orthodox Church. This complete emphasis on iconography is architecturally problematic. It is quite a challenge for an iconographer to paint the entire inside of a church without confusing the architectural forms, losing some of the elegant logic of the structure to the visual complexity of so many tiers of saints standing above one another’s heads. In many ways the earlier Byzantine style worked better, with the marbles giving a calm and orderly backdrop to the furniture and people at ground level, while the mosaics formed a sort of architectural ‘sky’ far above. When marble and mosaic could be afforded, this style continued to be revived all the way through the end of the Byzantine era. When they could not be afforded, churches were plastered and frescoed, and the iconographers painted a faux marble revetment on the lower walls. Thus for a great many centuries the two styles coexisted in Byzantium. After the fall, when church building continued only in distant Slavic lands where the marbled monuments of old were unknown, the painted revetment gradually got smaller and smaller and was at last replaced by painted drapery just a few feet tall. 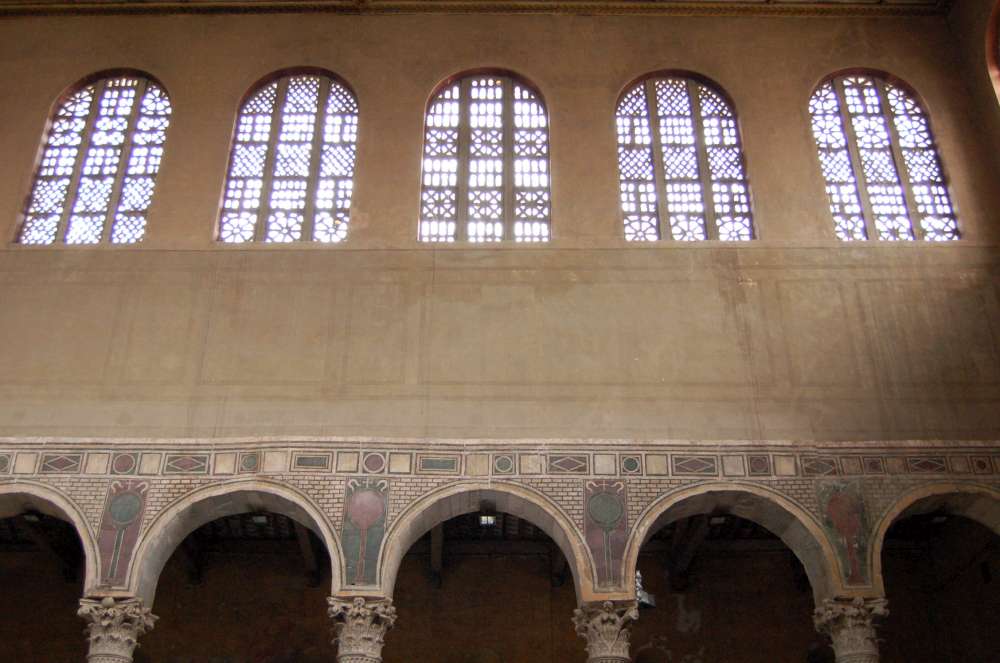 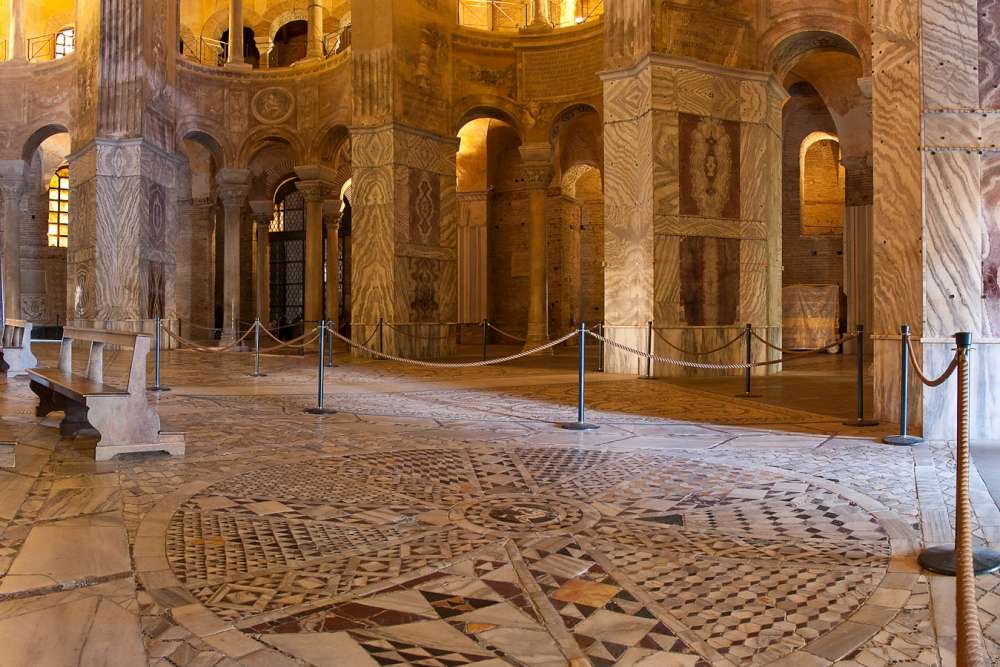 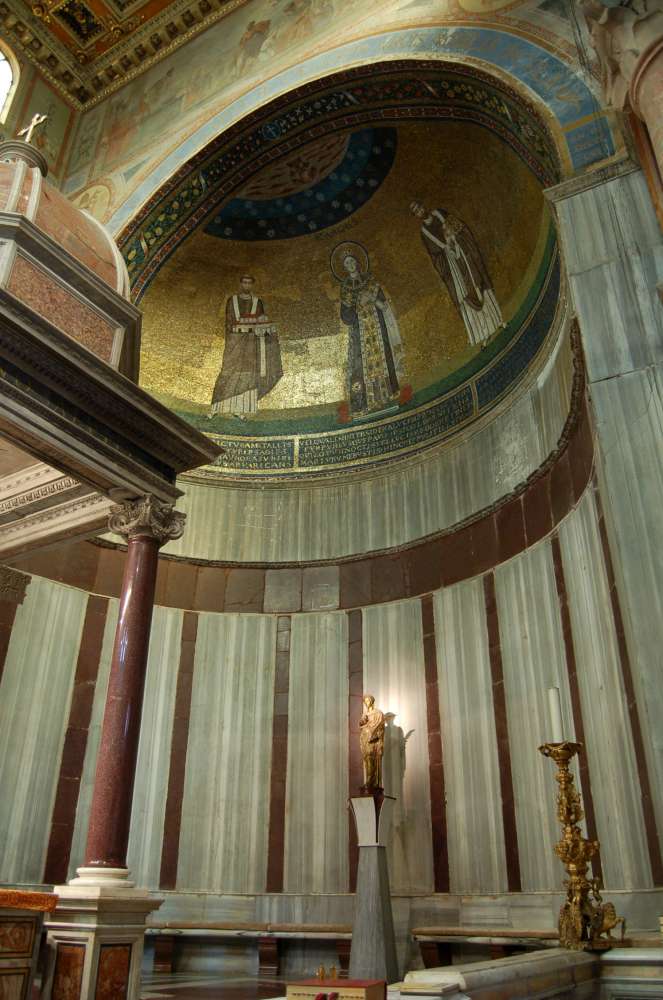 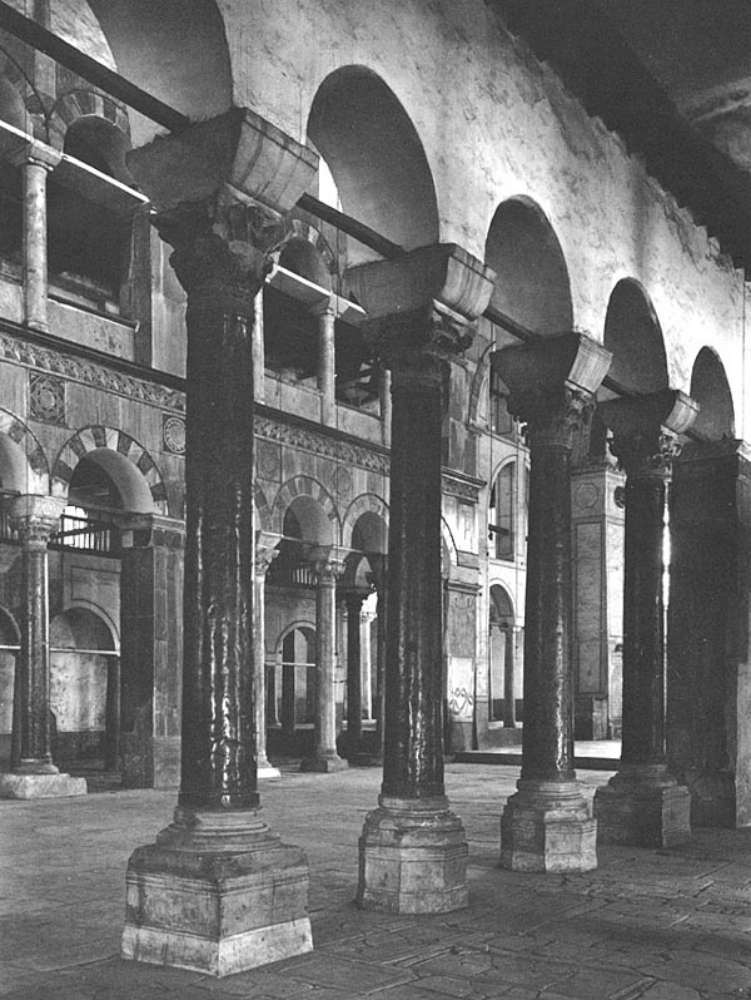 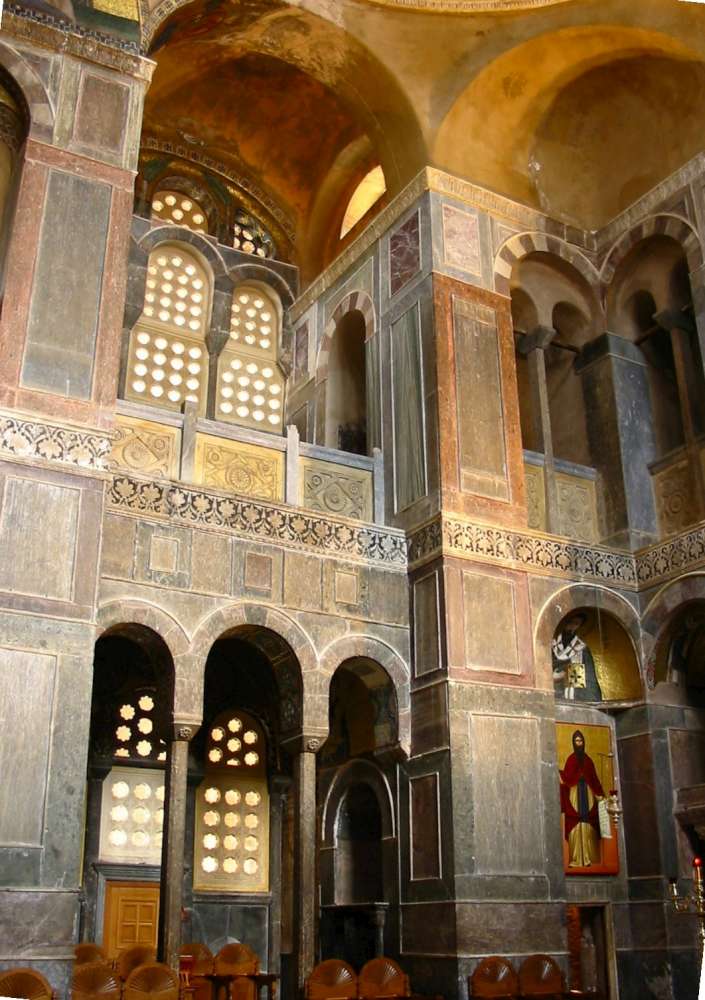 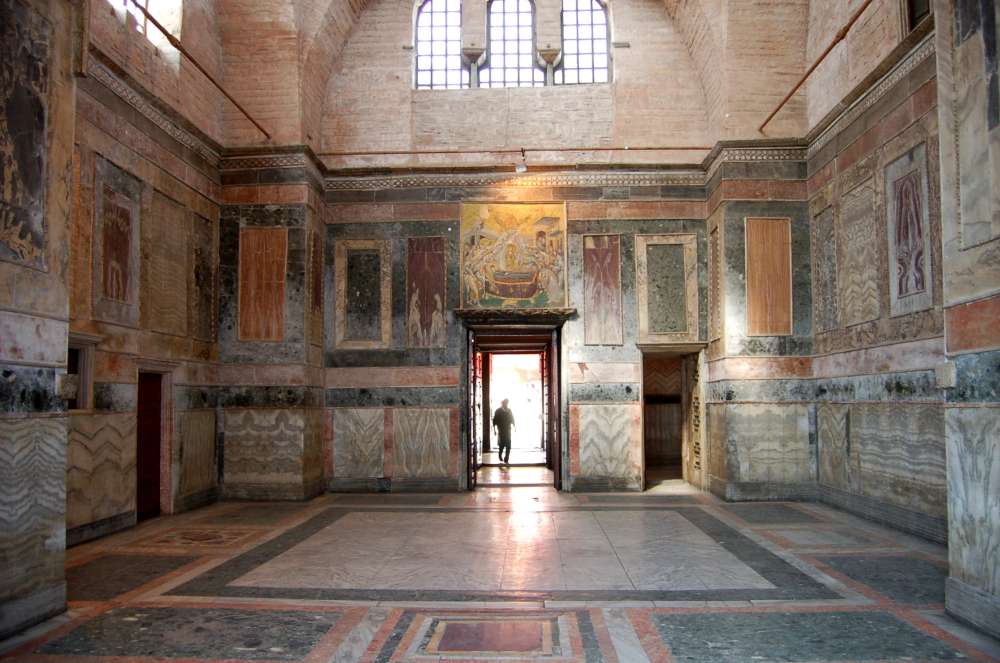 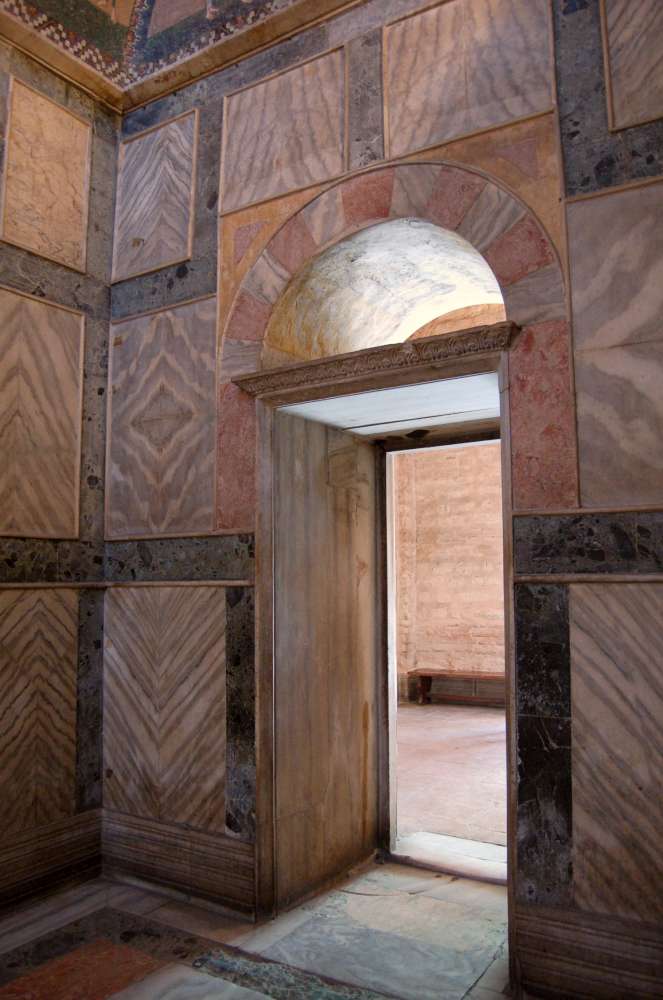 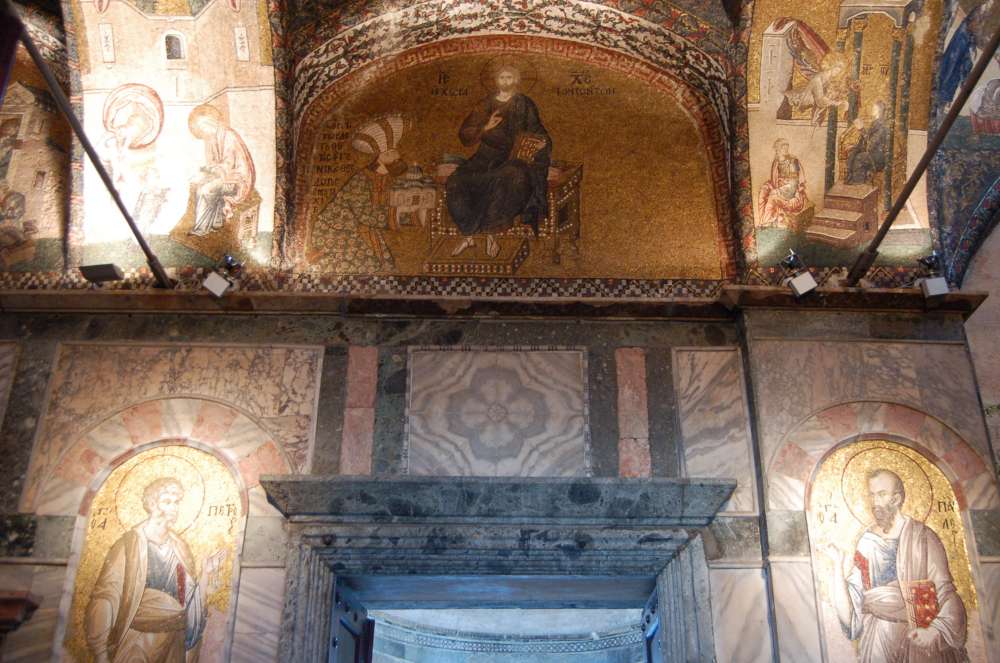