Iconography In The Landscape

One of the points I have been hammering at since I began writing for OAJ, is how symbolism is not just an arbitrary set of codes and meanings but is rather the very place where logos encounters the world, a coming together of different levels of reality. (See for ex, my article on the Recovery of Symbolism) If we learn to see through our own clouded glasses, we will find the world bursting with meaning and life.   Sometimes this symbolism is in the natural interactions between things, but sometimes it appears like a flaming arrow, a wondrous sign.

Ten years ago, before I was Orthodox, I noticed something very peculiar on a trip to Rome.  It was so peculiar that I was certain others had noticed as well.  I had always expected to see some mention of this somewhere, yet since I am yet to read anyone on this, I thought I would share it here as an example of how symbolic structures appear in the world.

In Rome there are 4 main basilicas, which used to be called the Patriarchal Basilicas.  They are:

Obviously, for those aware of Christian saints, we recognize four churches dedicated to what are probably the 5 main saints of our faith.  But for those interested in iconography, one will also realize that there is something else happening here.   In fact if we look at a map of these churches together, we will notice that the 4 churches form an interesting shape, like a trapezoid.  If one knows that East is the liturgical direction, we also cannot help but see that that the churches form a kind of triangle pointing roughly East, with the Churches dedicated to the Theotokos and St-John being somewhat on a line closer together (they are in fact connected by a road which is often used for processions from one basilica to the other)  and more to the East, while the Churches of St-Peter and ST-Paul are on an almost parallel line, though farther apart and more West. 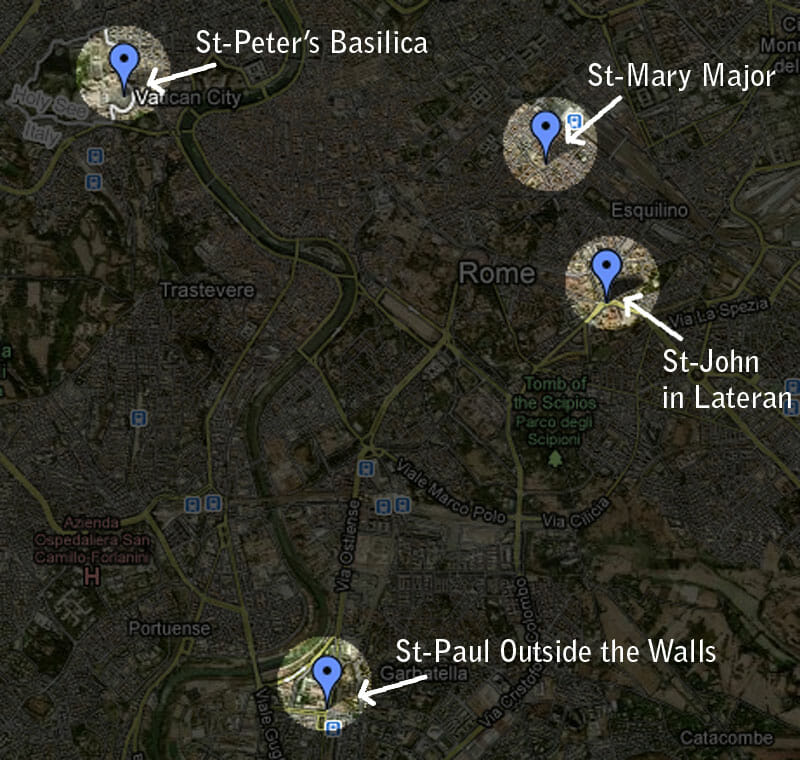 If we were to turn the map with East going up ahead of us, as we would experience a Church, we find that this disposition is the exact disposition of the Deisis, the main composition one would see in an Orthodox Church on the Iconostasis:  The Theotokos of the Right, northern side – St-John the Baptist on the left southern side – St-Peter and St-Paul in their traditional positions as seen in so many icons (see my article on the subject of the iconography of Sts-Peter and Paul). 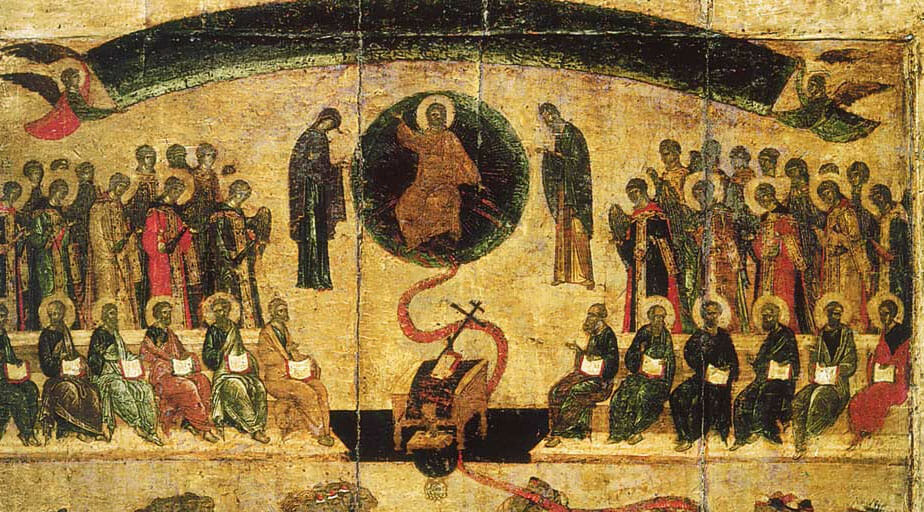 Detail of 14th century icon from Moscow where deisis is split into different levels.

Contemporary iconostasis made by Viorela and Vintila Mihaescu which captures both symbolisms of the deisis and crucifixion together.

Of course if one knows the history of these churches, one will see that this disposition cannot have been planned, and each church has a history of its own and a reason of its own for existing.  It would also be naive to say that this is a “coincidence”, that the main churches of Rome just happen to be arranged as the two main structures of iconography simultaneously, .ie the deisis and the crucifixion.  Pondering this mystery can help us understand how symbolism works, how it manifests itself as spiritual truth beyond individual intention and volition.

In my case, it was a strange sign that I would encounter in Rome an iconography in the landscape that had been largely abandoned by the Roman Church, but which continued to be present in the East.  I wondered, maybe a bit facetiously,  if this triangle of churches pointing east was not, like the deisis and crucifixion, pointing to some mysterious church in the east which would be dedicated to the Logos of God…