December 20, 2017The Drawings of Elena Murariu

March 18, 2015The New Romanian Masters: Innovative Iconography in the Matrix of Tradition

Elena Murariu’s exhibition “Martyrs”, as well as the album published on this occasion, bring to our attention the story of Romanian martyrs who prayed for their country and for the whole world. Some recognized, but most unknown, these martyrs are the gift of their people, an offering to God. Their bones cover the land of their country here on earth as their prayers resound in heaven. Their lives and sacrifice were as the rose’s petals falling one by one,  covering the earth and painting it red. Without these martyrs living and acting as they did, there would have been no church, for they are the seed of the church. Elena Murariu’s work and her associations between martyrs of different times reveal the continuity of these martyrs in the Romanian land.

The album is a must see, as it unveils the new faces of these martyrs. If text usually lays the foundation for the image, this time the image is the one inviting us to read and discover the lives of these persons. Some of them are already known, whereas most of them may not be so familiar. Each character trait underlines the care of the painter to represent particular martyrs as accurately as possible. They seem to come alive under our very eyes. The focus laid on apparently insignificant but carefully presented details unveils how these details bear in themselves the fruits of holiness. Such details allow us to find out more about the lives of these saints and open the gate to new possibilities of interpretation. Apparently insignificant details are in fact the root of sanctity. 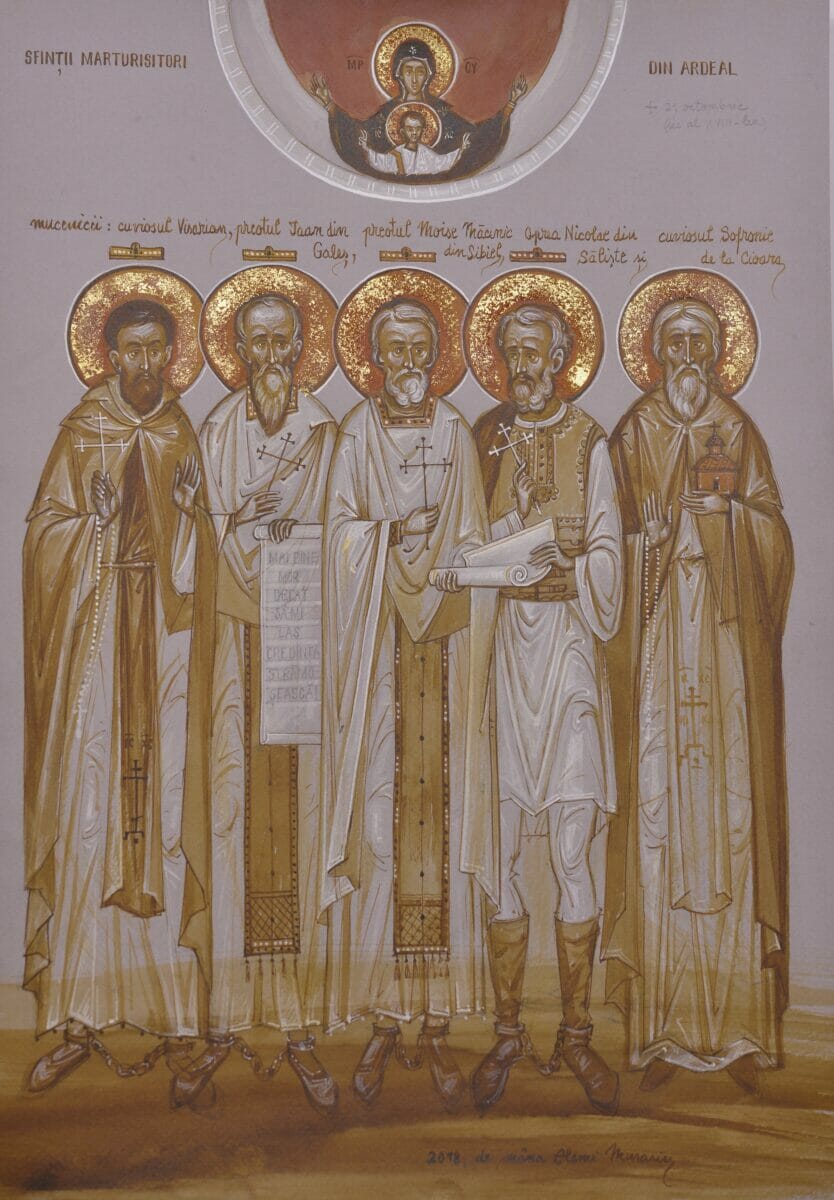 For example, the martyrdom of Oprea Miclăuș also conceals his wife’s deep suffering. She waited for him patiently for 32 years, praying, demanding with perseverance, in letters addressed to the Imperial court in Vienna, her husband’s release from prison. He was left to rot there and died a martyr. But his wife was part of this martyrdom, participating in his suffering, becoming herself a martyr and a saint alongside her husband. This is what Elena Murariu’s drawing emphasizes. 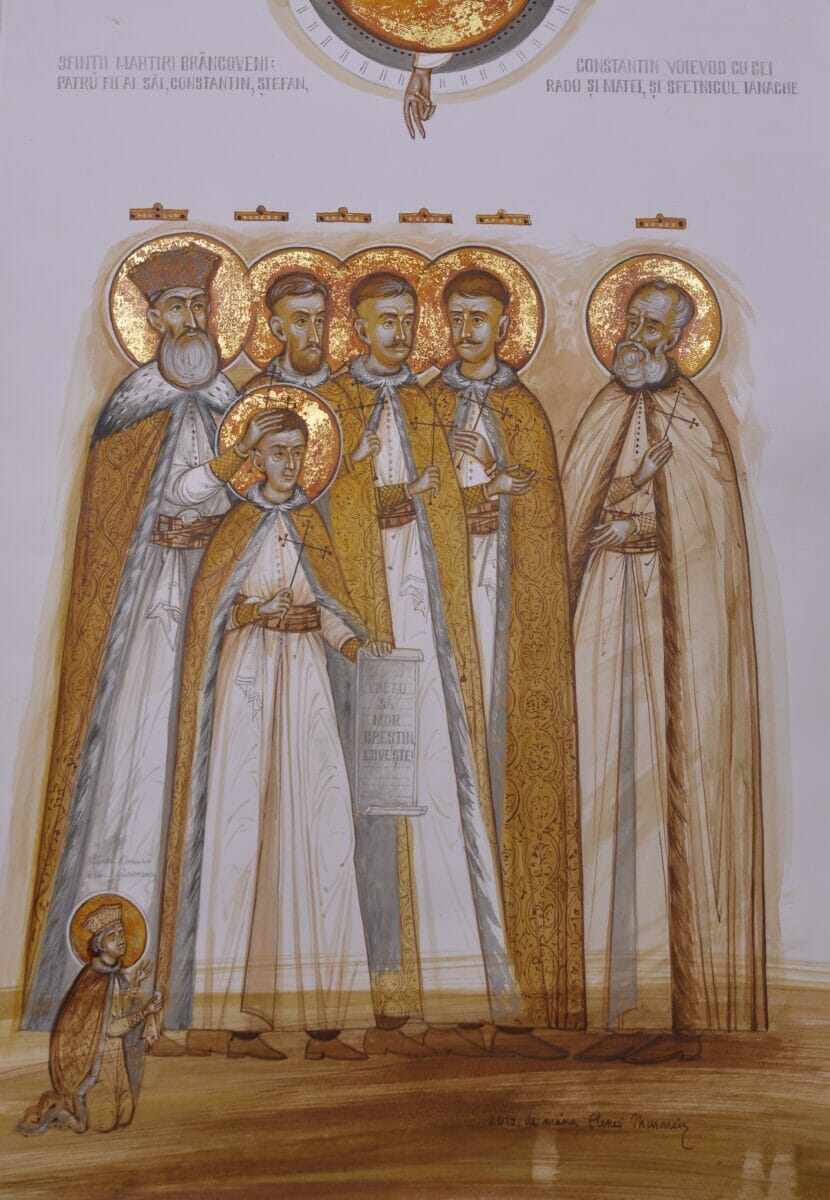 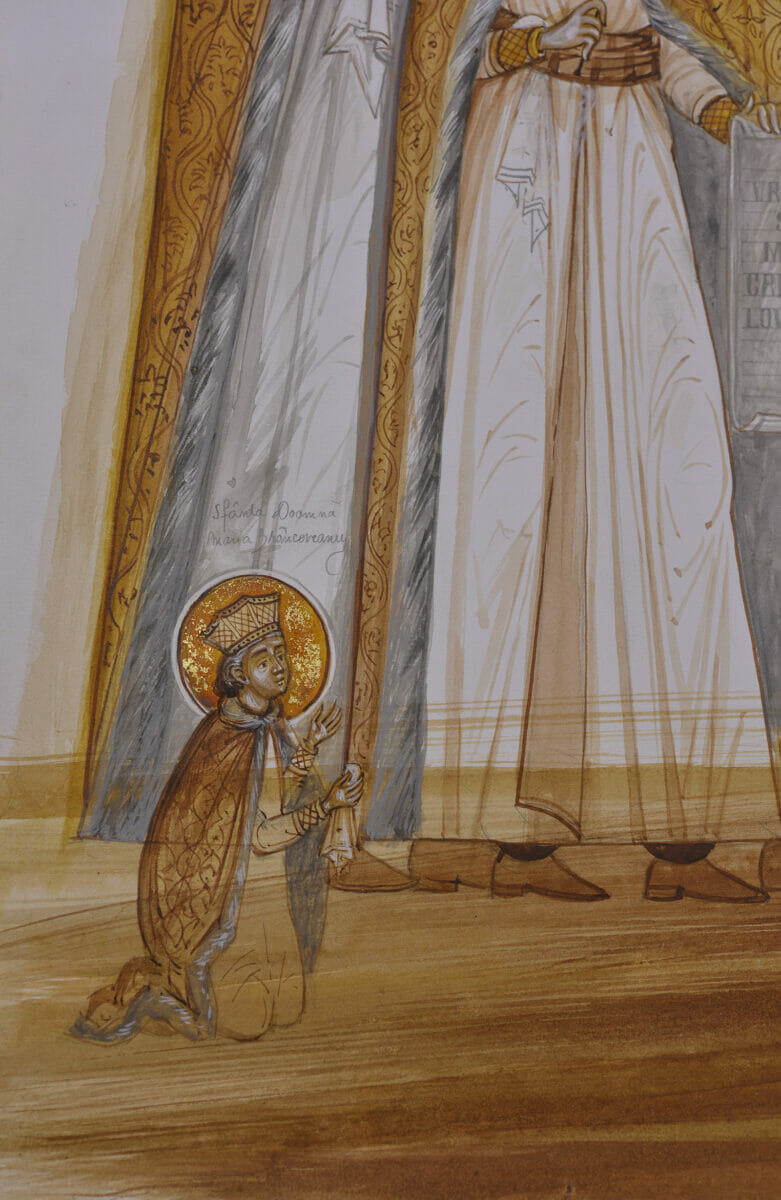 Another interesting image is the one bringing together the martyrdom of the Brâncoveanu princes, which took place in the18th century Istanbul, with Abraham’s offering. Their association may seem unusual, but ultimately strike one as being quite natural. In one version of this icon, behind prince’s Constantin Brâncoveanu, we find his son Stephan Brân.  Pressed in the prince’s coat one can see the face of little Măriuca, his very young daughter. Her face betrays her innocence as she is herself an icon in prayer during those hard times for her family and her country, Wallachia. 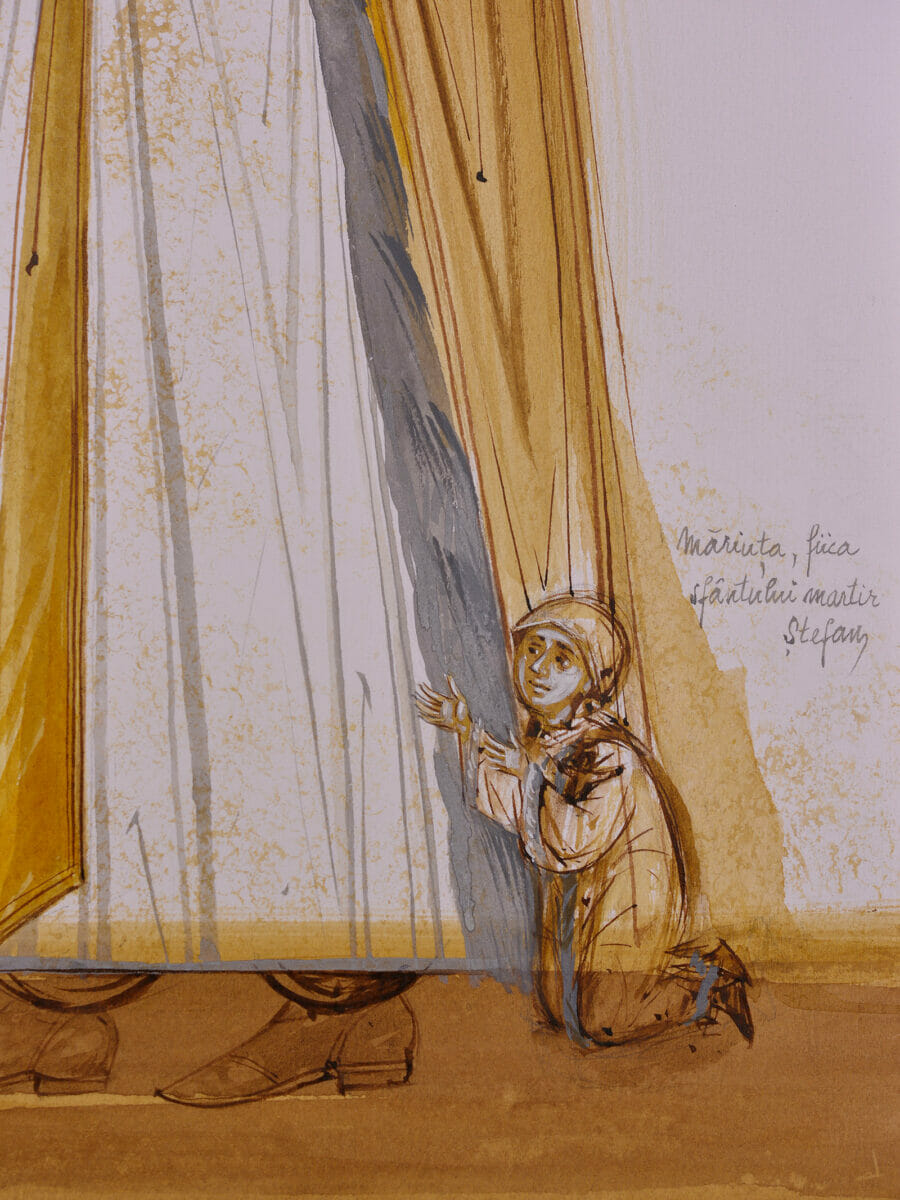 A piece of good news brought forward by this album is that Romanians also have a mounted warrior saint, who can stand along or, better said, ride along St George or St Minas. The horse has a lively expression reminding us of the enchanted horses from Romanian fairy tales, whereas the saint’s head seems a bit too upturned towards Christ, in a practically unnatural position, but maybe especially sought by the artist. He is St Atanasie Todoran from Bichigiu, in Transylvania who also died as a martyr for the Orthodox faith in the 18th century as did Oprea Miclăuș when the Orthodox Romanians from Transylvania were persecuted by The Catholic Imperial Court of Vienna. To mark their origin, the saints are presented in the traditional costumes of their region. The best known is the hat with peacock feathers which is as a distinctive element. 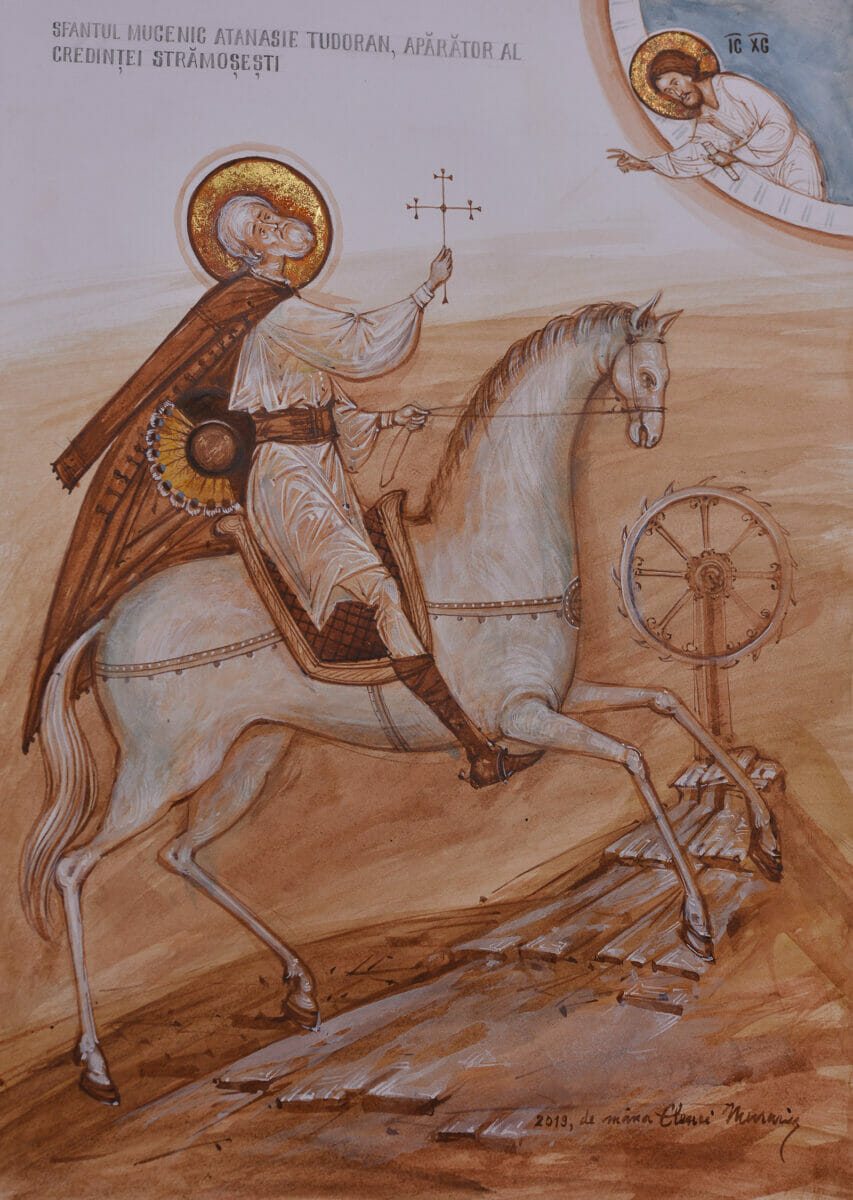 These representations betray the thorough documentation done by the painter on these saints in order to seize the most significant details of their lives which finally led them to martyrdom and holiness. Another painter might have reproduced them differently or might have focused on other details. Prayer and the holy spirit are the ingredients that rule the painter’s choices of the details and their representation.

The technique in which the drawings are done is ink on paper which allows Elena Murariu to express more freely and a lot faster… the lines are at times very thin and other times thicker. The faces are different and very expressive.
The colour range is not very wide. The colours employed by the painter are usually soft, a bit tern at times, the primary colours are almost never used, thus the drawings introduce the one who looks at them into another dimension. Some of the drawings do seem to require a drop of colour which could render them more lively, especially since red- the colour of martyrdom is missing. This choice of colours could make one wonder why red is missing from an exhibition representing martyrs. We also notice the important part played by the game of light and shadow, light being central to Elena Murariu’s concerns. The nimbuses and rays are done in gold leaf.

The torments of hell borne by the saints of the communist prisons are represented as a sea monster, similar to that depicted in the scene of the Last Judgement. Christ, with much compassion bends towards those who confessed Him and by doing so, they became like Him, the prototype of all martyrs. He blesses and gives them His strength. This closeness of Christ must strengthen us all as it had strengthened them, and the love and pity expressed by the face of Christ, painted with a highly developed miniaturistic skill by Elena Murariu, are the same love and care with which He embraces all the people. 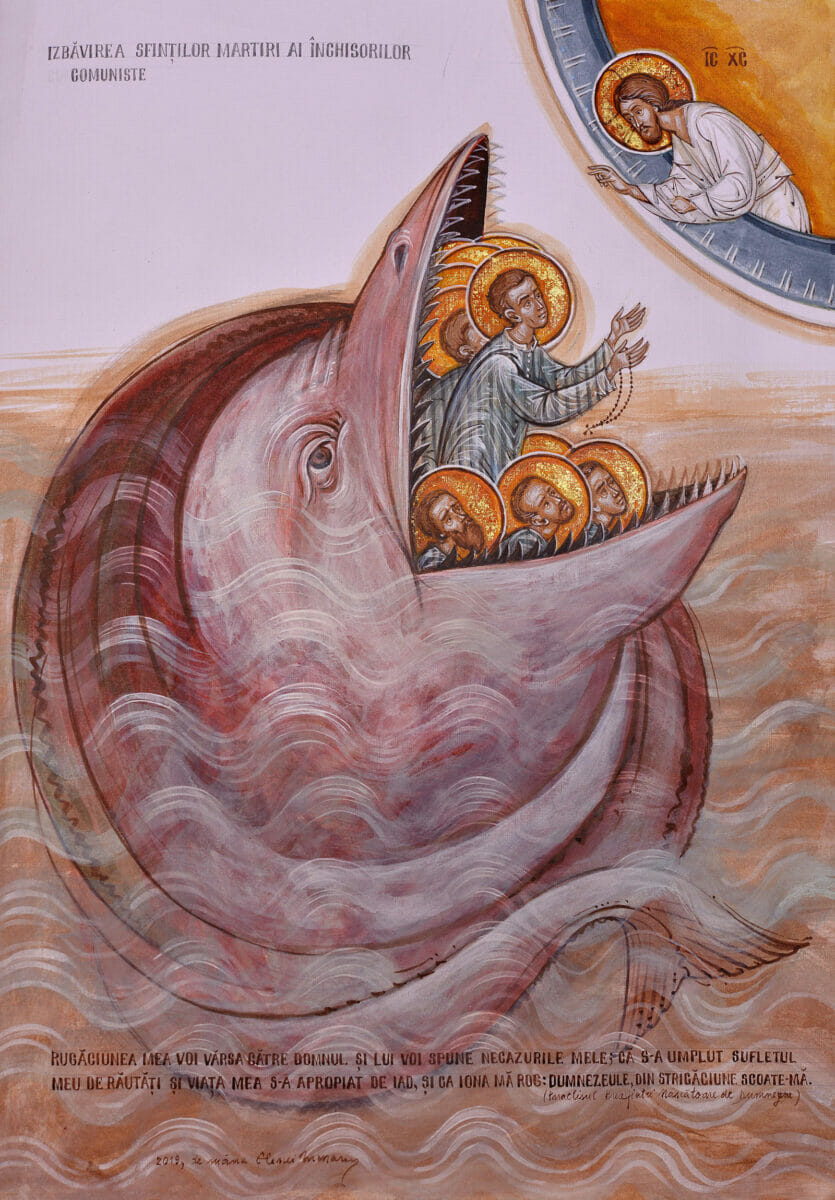 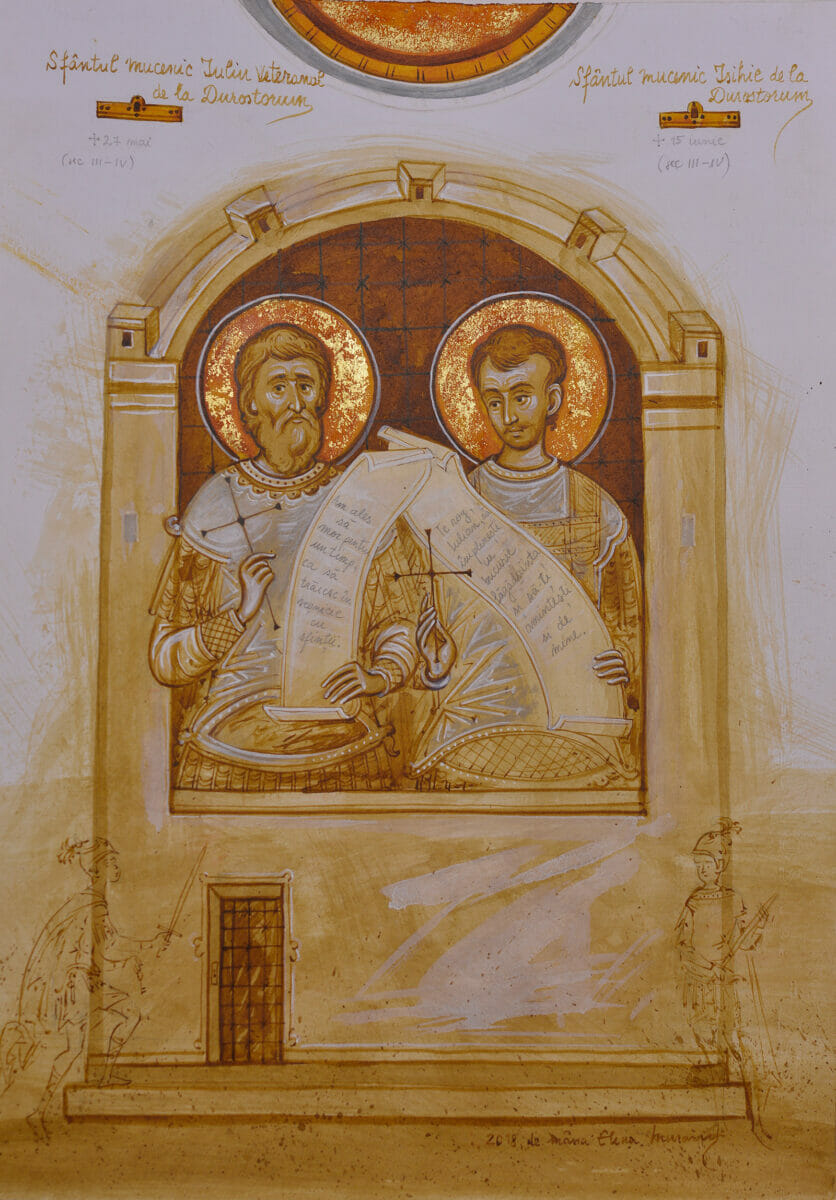 The album opens with an image of St Julius the Veteran and that of the holy martyr Hysichios of Durostorum, maybe a bit too melancholic, both in prison and ends with the figure of an unknown saint from the communist period, who like Christ urges us not to avenge him, in other words: “Father, forgive them for they know not what they do”. The prison has a metaphoric meaning. It is a bridge in time, linking the first martyrs of Christianity with the contemporary ones, indicating the bond of love and offering between the martyrs of the first Christian centuries and those of our epoch. The land of Romania has never ceased to give rise to martyrs. One can trace throughout the centuries a continuity in the offering and the martyrdom that sanctified the Romanian land. But no one must be taken in by the representation of the prison, that conceals their torments and their martyrdom, even though the bodies of these saints lie physically behind the bars, their souls rise freely to God along with the seraphims, so beautifully painted by Elena Murariu in the four corners of the prison that confines the unknown martyr of the communist times. I was about to write “that unhappy unknown saint”, because this is how our human reason conceives him, but in fact it would be more appropriate to say “happy unknown saint” for by his offering he gained the freedom of spirit along with his resemblance to Christ. 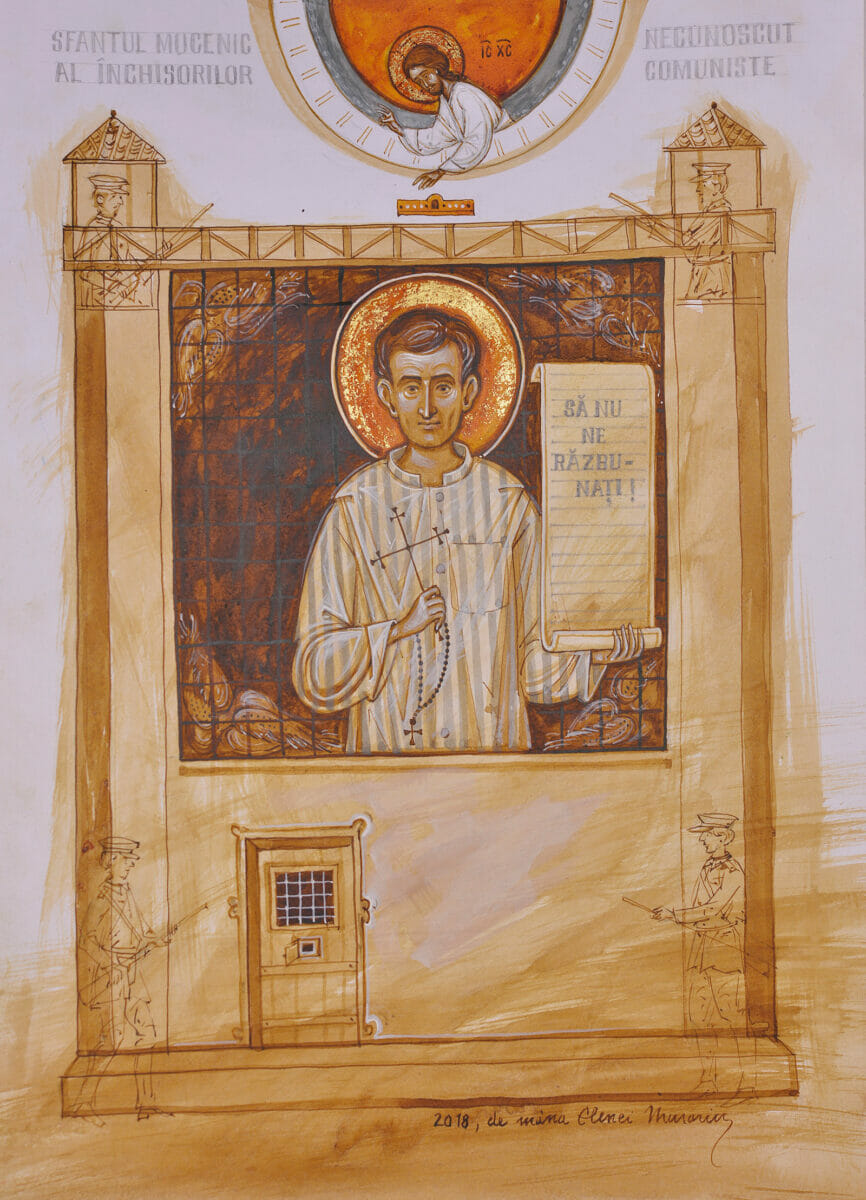 The cover of the album is adorned with the names of the martyrs of 1989 who gave up their lives so we can now meet and speak freely about our martyrs and so we ­can sing a panychida for them in our churches adorned with the images of martyrs of all times and all places. 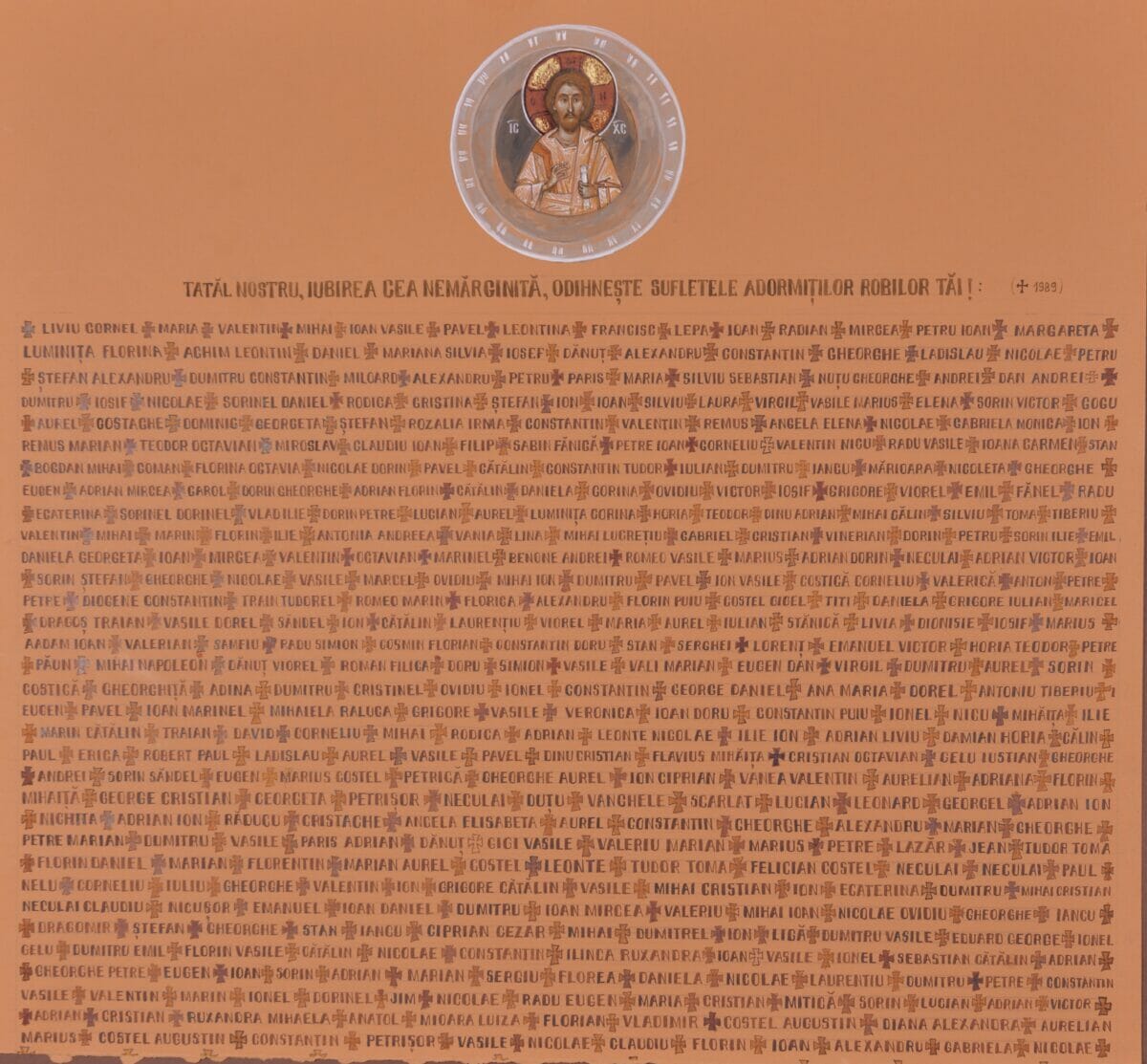 Elena Murariu, with much patience and abnegation, in an act denoting her piety wrote down these names from each cross in the graveyard, recovering for us the memory of these lost heroes in an attempt to regain our dignity and our verticality in front of history. The martyrs of the Romanian Revolution are represented in a circle that reminds us of the Romanian traditional dance, hora, that people danced when the Romanian countries were united into one Romanian Principality in the 19th century. 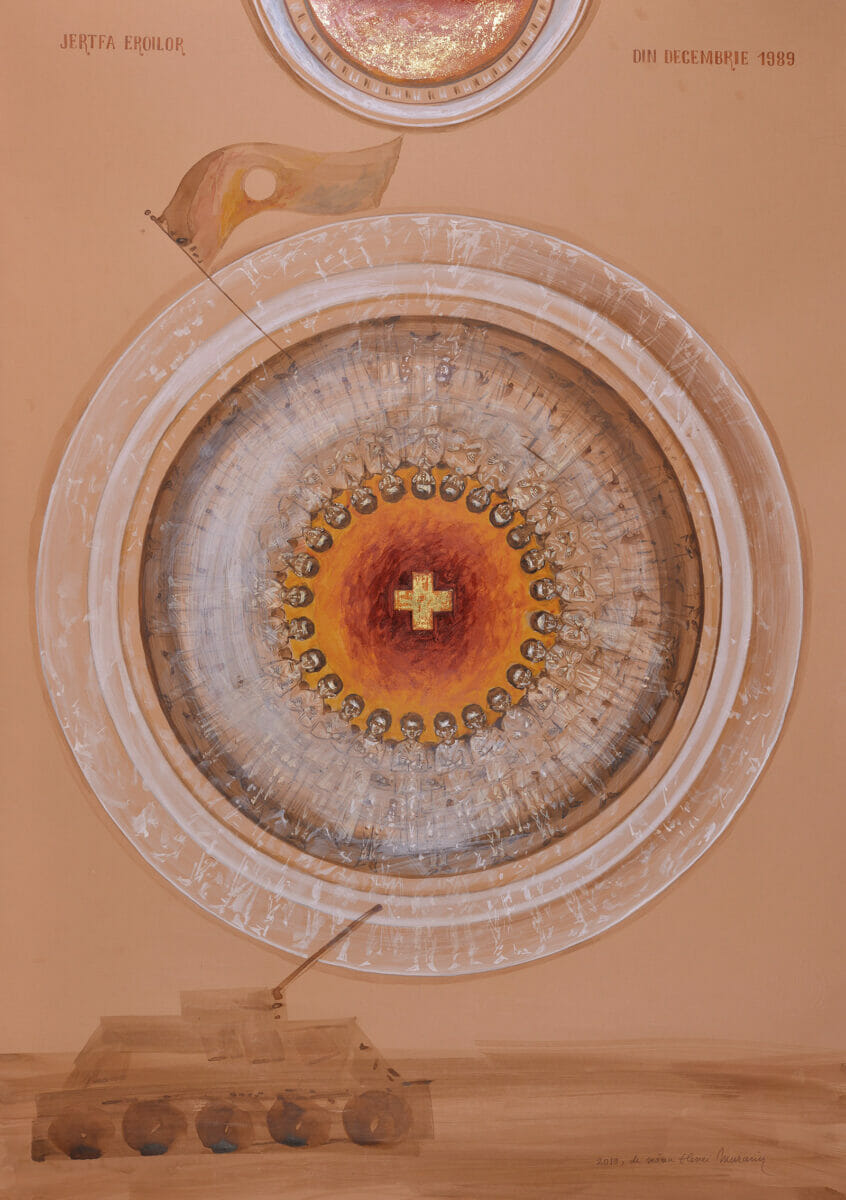 This project is in line with Elena Murariu’s other projects starting with the depiction of the martyrdom of the Brâncoveanu family who died as martyrs in Istanbul in 1714. This is Elena Murariu’s second project in only one year. The other one, the exhibition called The Firtrees is dedicated to the memory of the youths who perished in the 1989 Revolution. Thirty years after the events, Elena Murariu’s exhibition invites us to travel back in time, to meet these people, not allowing them to fall into oblivion. Before this exhibition most of us were aware of the death of these youths in the Revolution, but not many of us had an idea about who they were and what they looked like. Elena Murariu’s work brings us a step closer into transforming the martyrs of all times into our daily friends and interlocutors.

This is a very daring project, absolutely needed nowadays as these martyrs are for those who discover them an endless and lively source of holiness, of strength and love in a world where all these seem to disappear more and more every day. We hope that there will be other martyrs joining them in our calendar, true and vivid examples of dignity and holiness, living flames of prayer before God’s throne for their country and the whole world.

To purchase the catalogue: https://www.librariabizantina.ro/Martirii-Elena-Murariu