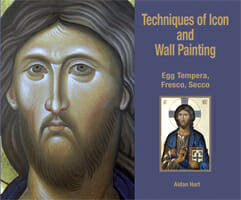 In iconography, a saint or event may be depicted against a gold or a plain background. They can also be placed in an architectural setting in order to express something of their life, or in the case of a feast, the theology of the event. 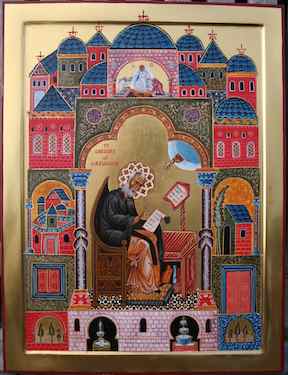 The illustrated contemporary icon  shows St Gregory Nazianzus set among buildings adapted from a twelfth century illumination. The commissioning client intended to use the icon to illustrate his lectures on the saint’s theology and life. He wanted it to reflect St. Gregory’s tension between his natural inclination for contemplation in the solitude of his country retreat, and the Church’s need of him in the city to defend the faith against heresy. We agreed that the icon had to be boldly coloured so it could be easily read at a distance as an educational aid, and that it should contain the maximum teaching material without becoming cluttered.

We decided to base the icon on a well known illumination of the saint found in St Catherine’s Monastery, Sinai. As in the manuscript, this icon shows the saint seated within an abstracted church structure. He is writing, which indicates his teaching ministry. And although a bishop, in this icon he is shown not in his liturgical vestments but in his monastic habit in order to highlight his contemplative inclination. As with the manuscript we used rich but natural pigments – cinnabar, azurite, malachite and transparent earths.

We however changed surrounding elements of the original illumination in order to express St. Gregory’s tension between city and countryside.  We incorporated to his left a city as seen through a window, while on the other side we included a monastic cell set in a garden.

The Resurrection icon was painted in a lunette above the saint, in honour of the house-church in Constantinople dedicated to that feast where St. Gregory preached his most formative sermons on the Trinity.

Architecture can also be used to identify a saint’s cultural context. If they founded a church in Russia, for example, they can be shown holding a Russian styled church, or an Anglo-Saxon church if in England 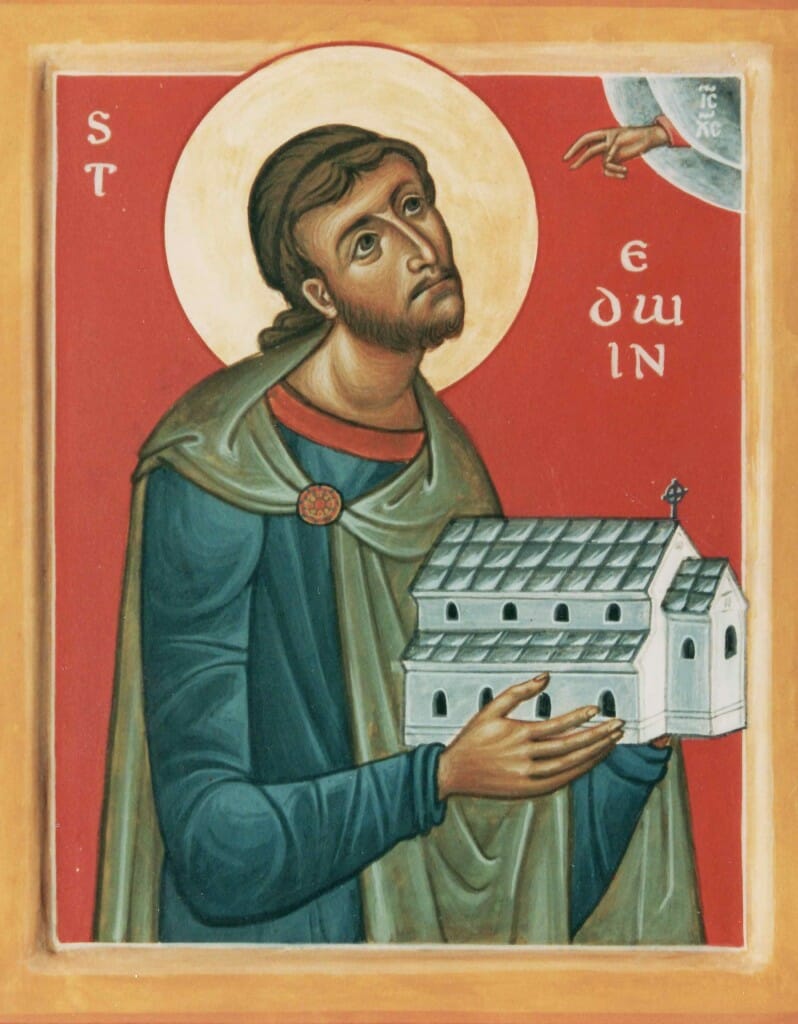 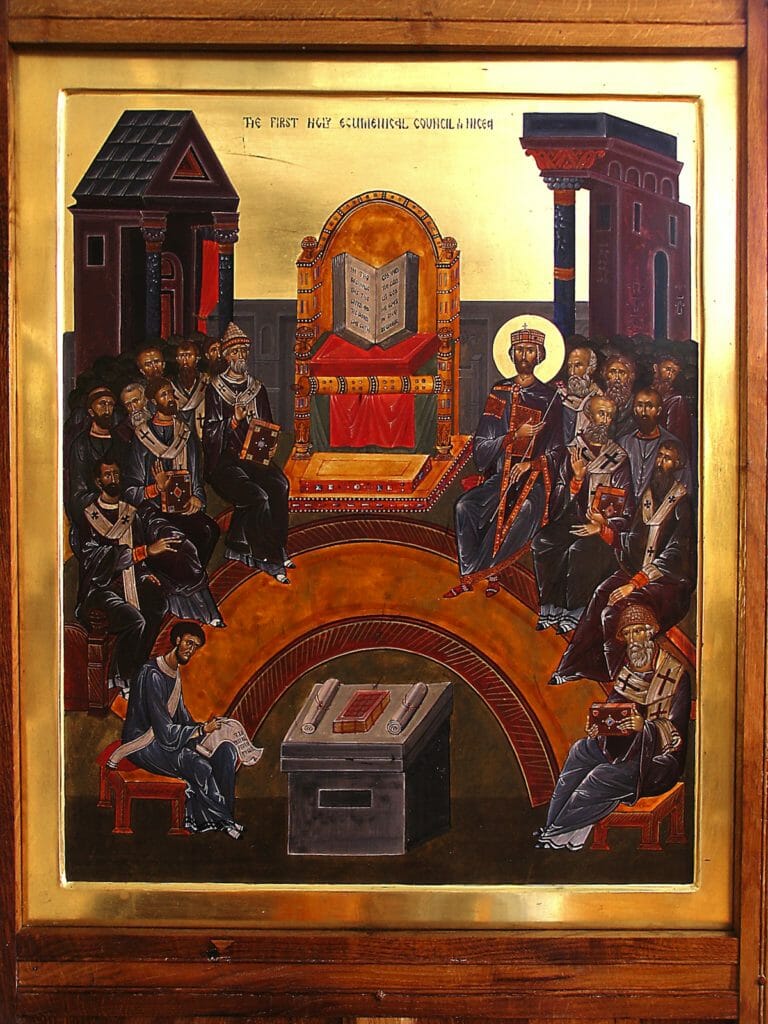 . The architectural and furnishing features was based on a very early illuminated manuscript of the council: 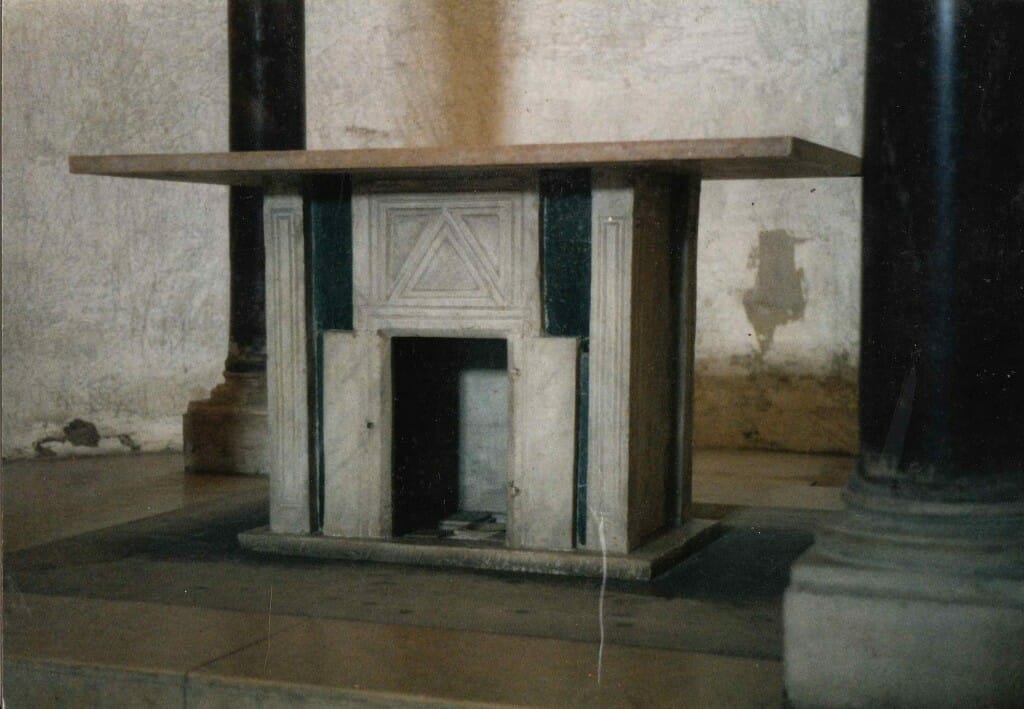 Sometimes people want to include elements from nature that are associated not only with the saint’s life but also with the place for which the icon is intended. These can be included as long as they do not clutter the image and detract from the icon’s primary purpose of helping us establish a relationship with the saint. Everything must be placed and scaled so as to draw us to the saint. 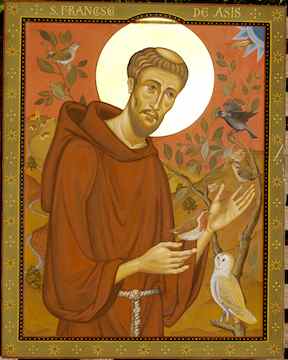 Francis of Assisi by Aidan Hart

The illustrated icon of Francis of Assisi was one such commission. It was destined for a church on a hilltop village in Spain, restored by the donor’s father. This was included in the background to the saint’s right, and balanced to his left by birds associated with that place and the donor. A cinnabar red background was chosen not only to signify the life-giving presence of God, but also to suggest the heat of Spain and Francis’s Italy. 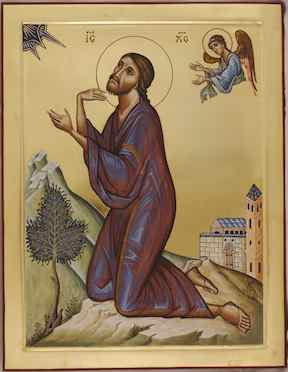 Garden of Gethsemane by Aidan Hart

Mountains often express the spiritual dynamics of an event. We see this in the Garden of Gethsemane illustrated above. Christ is “sorrowful, even to death” and prays with profound anguish. This is reflected in the upward sweep of the jagged mountain. 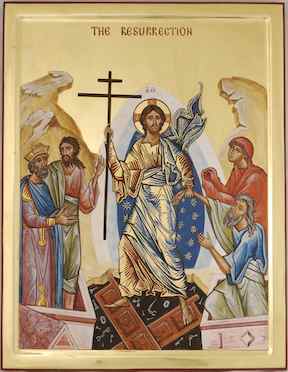 Harrowing of Hades by Aidan Hart

In the above illustrated icon of the Harrowing of Hades, the rocks appear like the jaws of Hades opening to free the captives imprisoned within. 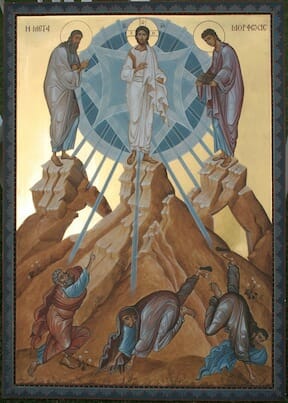 In the above icon of the Transfiguration the mountain is subdivided into three distinct rocks to affirm that union with Christ retains the distinction of persons. Note also the two caves, filled with light (gold leaf). Both Moses and Elijah, either side of Christ, experienced partial epiphanies in places related to caves. Moses was hid in the cleft of a rock as God passed by, and he saw only “the back parts of God”. Elijah went to the mouth of the cave where he was hiding and heard God as a “still small voice”. But here on Mount Tabor, they behold God face to face in the person of Christ. The dark cave of partial revelation is filled with the dazzling splendour of the transfiguration.