December 5, 2013“The Icon is Making its Way in America”, an interview with Ksenia Pokrovsky

Iconography in the Atlantic Rain Forest

We at Hexaemeron celebrated our tenth anniversary almost 5000 miles from home base. Returning from an iconography workshop we held in the Atlantic Rain Forest of Brazil, January 19 to 26, we had time to reflect on our past and future: it seems like only yesterday when we started in 2003 with 30 students. And the future? We reach approximately seventy-five new students each year and we continue to add more offerings to fill out the curriculum of ecclesial arts. In October 2012 of  we added embroidery with Olga Fishchuk from Kiev as our instructor. In May of 2013 we will begin classes in carving with the Orthodox Arts Journal’s own Jonathan Pageau from Montreal. Looking even further ahead, we plan to add mosaic arts in 2014.

But for now, everyone wants to know, “How was Brazil?” 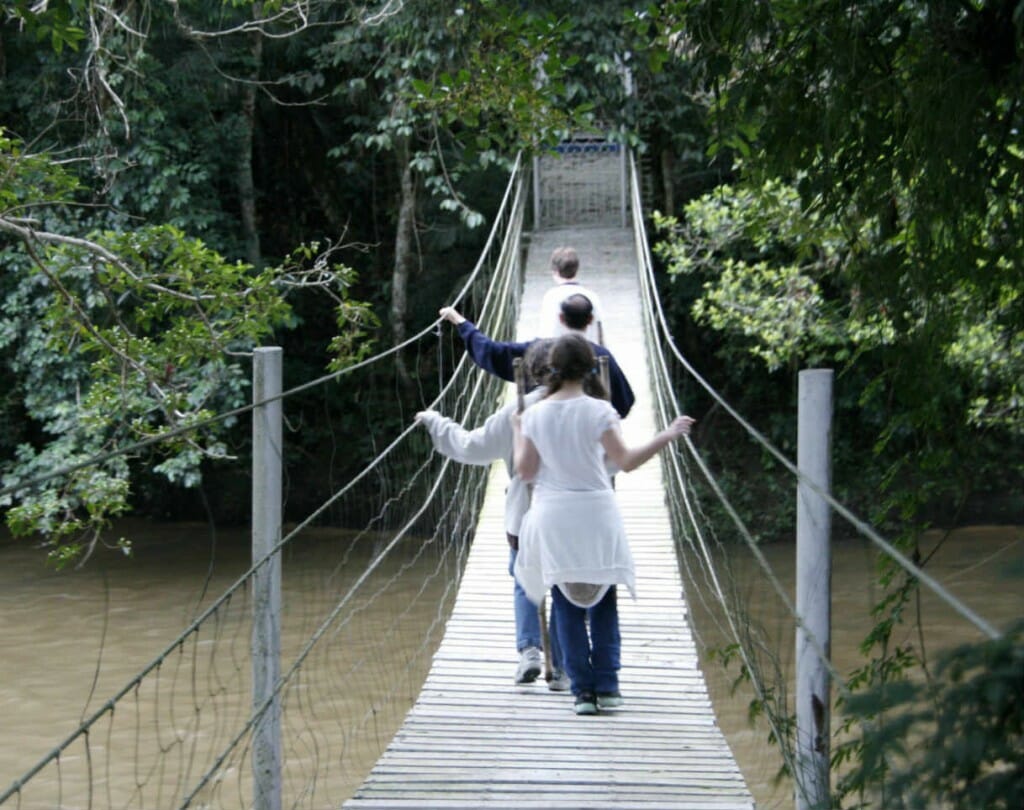 On the bridge into the rainforest.

The setting was remote, about an hour drive south of São Paulo and another 20-minute drive into the mountains surrounding the little village of Juquitiba. On our first walk in the Atlantic Rain Forest, our guide pointed to pink lichen on the trees and noted that it is one of the bio-indicators of pure air quality. The air was velvet. We barely needed lungs to take in its oxygen-rich load from the giant Araucarla trees. Unlike what we expected, the temperature and humidity were consistently comfortable for summertime in Brazil. And the people epitomized all the “g” adjectives: gracious, generous, gregarious, and above all, grateful. 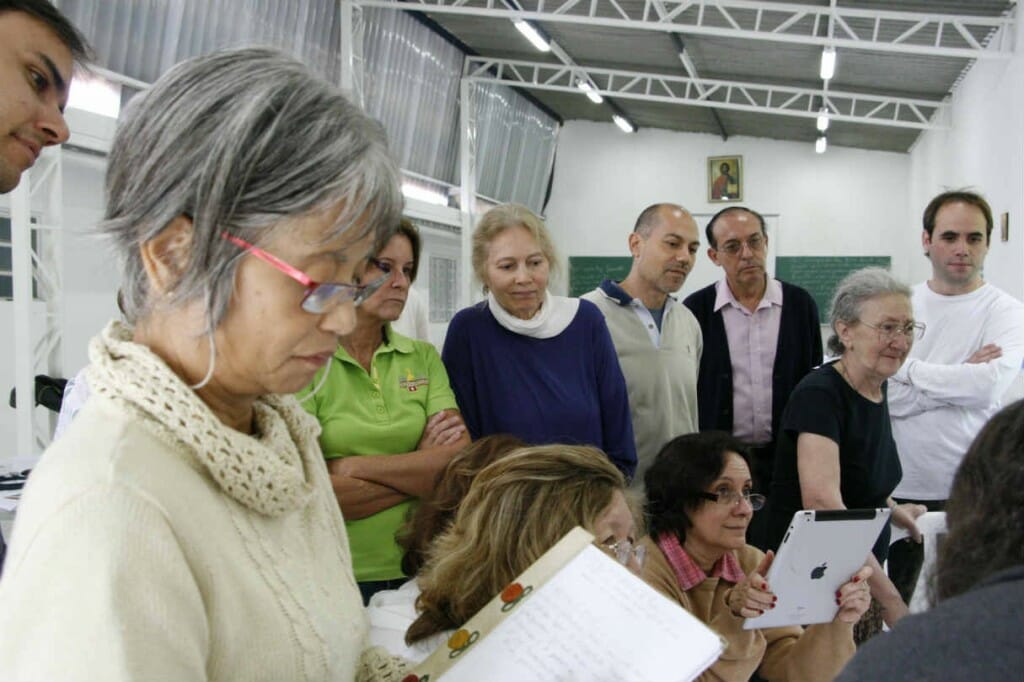 Ksenia and students on the first day.

Of the 17 students who participated in the course, all but five spoke some English. Keep in mind that Russian is the mother tongue of our teachers Ksenia Pokrovsky and Anna Gouriev. Added to that, we not only had students from Brazil where the official language is Portuguese but also students from other South American countries like Argentina and Chile where Spanish predominates. The technical nature of the course as well as the inherent theological aspects of iconography made it necessary to work through an interpreter. Our interpreter, thankfully, was a long-time student of Ksenia’s who joined us from Uruguay. Because of Alicia’s previous work with Ksenia, she is literate in the terms and processes of icon painting. But Alicia speaks Spanish, limited English, and no Portuguese. It was a challenge for all! 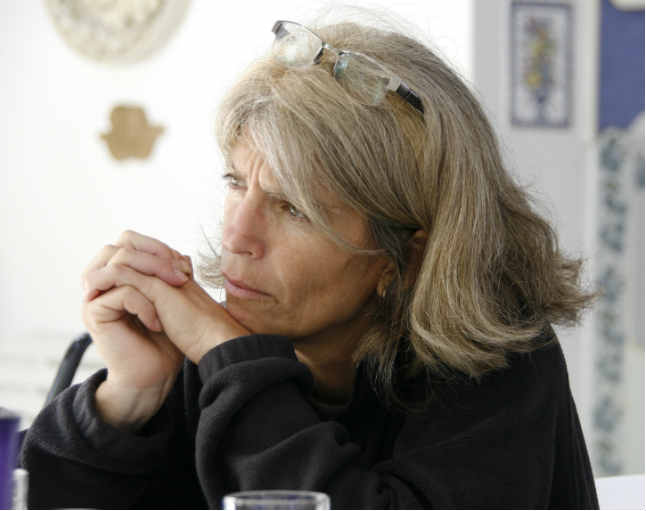 An entire chapter could be devoted to the food and to our [g]lorious, [g]ifted cooks, João Pedro and his mother Isabella. João Pedro was also one of our most enthusiastic iconography students as well as an opera aficionado who could belt out a Puccini aria like Pavarotti’s understudy. Many others helped with baking fresh bread, making passion fruit pudding, and shopping the market each morning for fresh mangos, papaya, caju, guava, grapefruit, pineapple, various melons and varieties of bananas, and fruits we had never heard of. Every meal was a work of art! 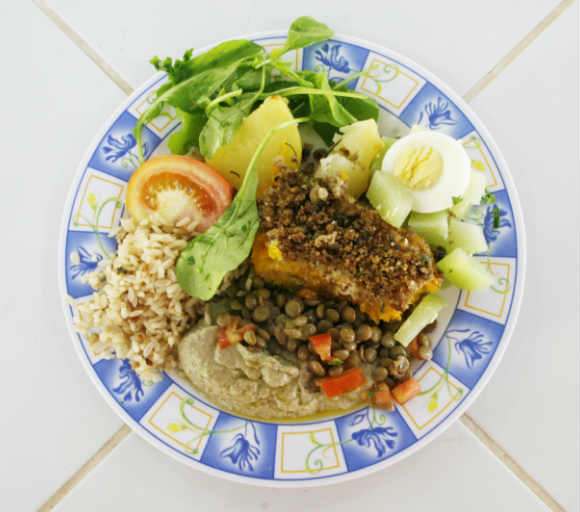 Just one of Jao Pedro’s masterpieces.

For some time now students have been coming to us from South and Central America to receive the high level of practical instruction in iconography for which Hexaemeron is known. At the behest of two of our most frequent long-distant commuters to North America, Gilberto Safra and Kleber Barretto, we made the journey to hold a class in their homeland. Our experience there showed us how much the students’ desire to learn the artistic elements of iconography must be supported by an understanding of the theological basis of the icon within Christian Tradition. Whereas it is the power of the icon to speak directly to the heart, a thorough grounding in Christian theology is necessary to interpret the language through which the icon speaks. The icon is indeed inseparable from Christ’s Holy Church. Because the proper context for the icon can only be understood within the life of the Church, the skills we teach cannot be applied to any other subject matter. What is the subject of icons? Through line and color the icon articulates the glorified estate of persons who have “fought the good fight and have received their crowns.” Thus ultimately, the subject of every icon is the redemptive accomplishment of the Crucified and Resurrected Jesus Christ who is the “express image” of God. The artistry of the icon exists to describe the revelation of God become man, who for the sake of our salvation was incarnate of the Holy Spirit and born of the Virgin Mary: “the Only Begotten Son of God the Father, of one essence with the Father, God of God, Light of Light, very God of very God, begotten not made, of one substance with the Father.” [from the Niceno-Constantinopolitan Creed] 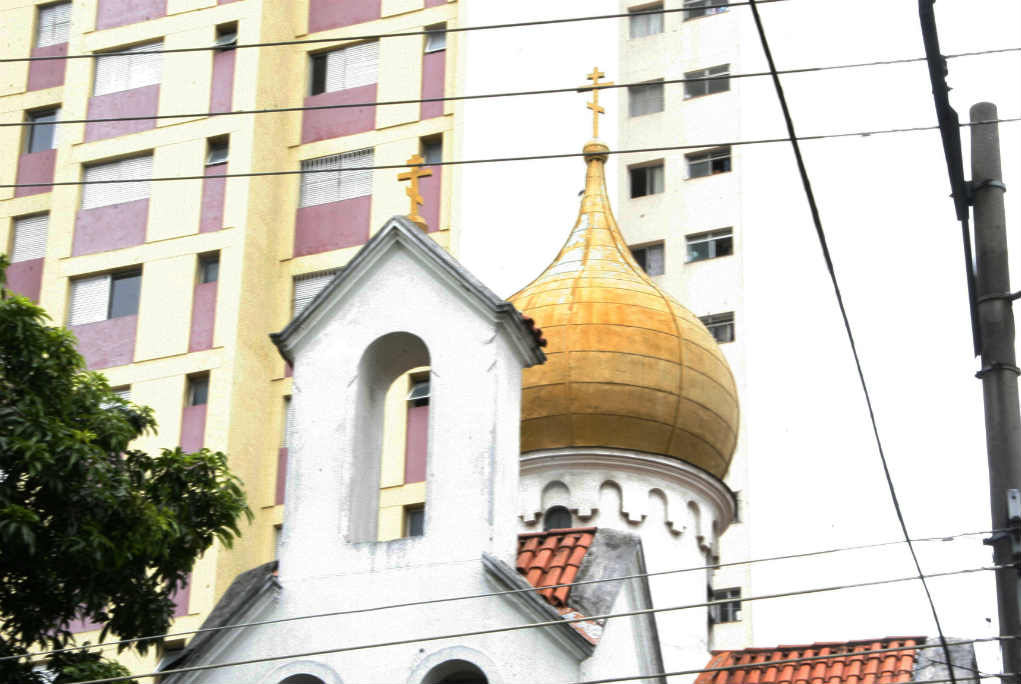 Orthodox Christianity is not new to Brazil. We came face to face with the organic deposit of Orthodoxy in a surprising  way. On our last day in São Paulo we attended Liturgy at St. Nicholas Russian Orthodox Church in the center of the old city. After Liturgy on Sunday, January 28, we met Fr. Constantino Bussyguin and some of the parishioners. Among them was 95-year-old Antonina who as a young person in her twenties served as an interpreter for St. John Maximovitch of Shanghai. Antonina grew up in the colony of Russians exiles [White Russians] whose loyalty to Tsar Nicolas II forced them to flee Russia in the 1920s. Pursued by the Red Army after Kerensky’s Provisional Government fell to the Bolsheviks, these refugees eventually settled in China. They endured the Japanese occupation of China during World War II, but when the Communists under Mao Tse-Tung took over power, the colony was forced to flee again. 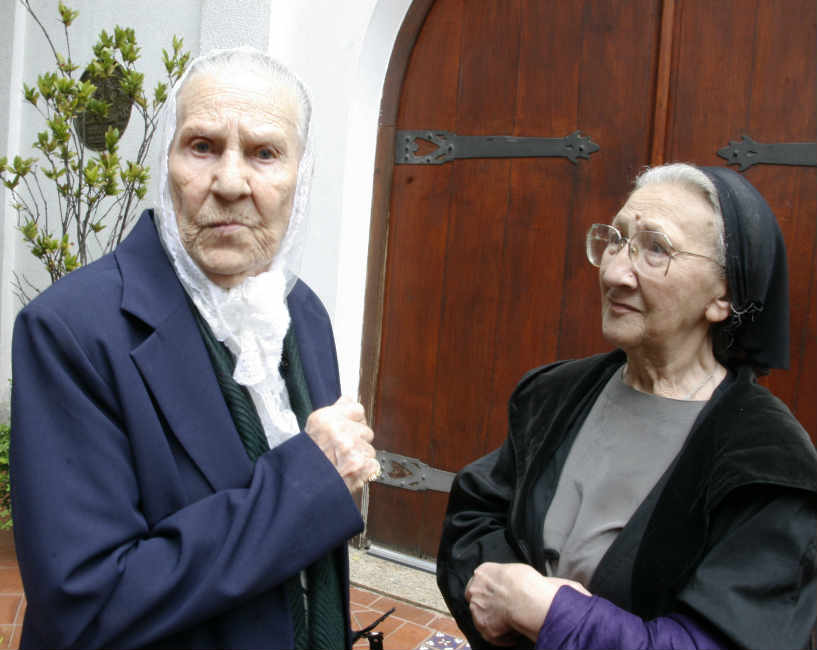 The majority immigrated to the United States in the 1960s; hence St. John of Shanghai also became John of San Francisco. Another contingency went to Australia. But some, like Antonia and her family, came to Brazil. Energetic and engaging, Antonina speaks fluent Russian, English, Chinese, Japanese and Portuguese. We were in awe of her and astounded to meet someone so intimately associated with St. John. Ksenia’s icon of the”Saints Who Shone Forth in North America”, which of course includes St. John, is widely recognized as the prototype for the North American saints. Time did not permit us to form bonds of friendship or lines of communication with either the Russian community or the large congregations of Orthodox Syrio-Lebanese and Greek Christians in São Paulo. However, another interesting connection we encountered was that one of our students, Latife Yazigi, is distantly related to the new Patriarch John X (Yazigi) of Antioch. Perhaps on a return trip we can cultivate these ties, and perhaps Fr. Constantino can offer theological assistance with our classes.

We gratefully wish to thank our generous and gracious new friends in South America who lovingly embraced us as family. Parting from our family there in the rain forest is still fresh on our hearts. After working hard to produce beautiful panels, they sent us off with a longing to maintain our mutual bonds of affection. Obrigada Gilberto, Kleber, Vera Maria, Danillo, João Pedro, Matias, Maria Mercedes, Maria Laura, Latife, Guillermo, Florencia, Lucilia, Isabella, Moses, Miguel, Ligia, Claudia, Dulcineia, Alzira, Zuma, Paulo, Leda, and Walter! 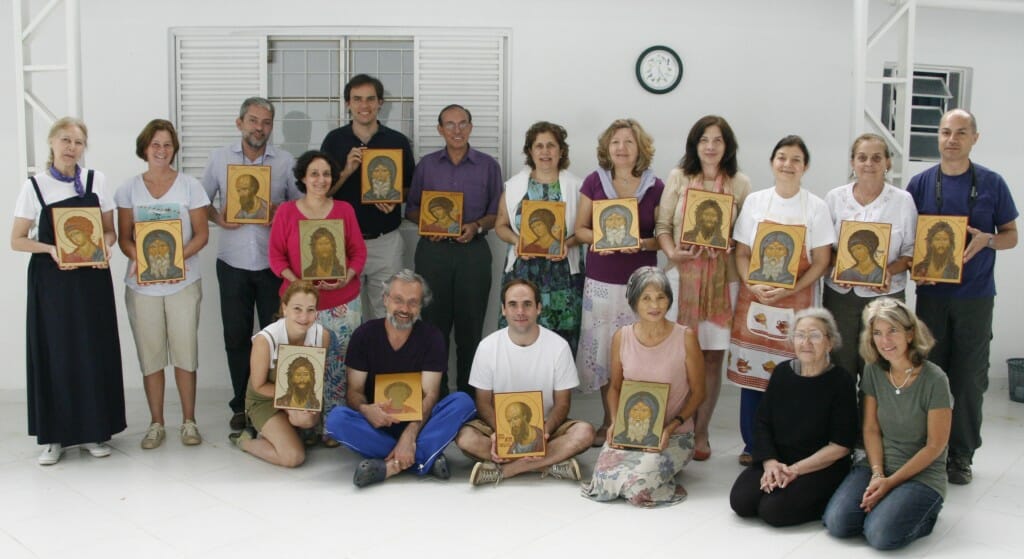