Concert—Deep Roots Are Not Reached by the Frost: The Enduring Russian Sacred Choral Tradition, 1830 to the Present

On May 31, at Holy Trinity Orthodox Church in Danbury, CT, the St. Tikhon of Zadonsk Chamber Choir will give a concert of Russian Orthodox liturgical music in the final installment of the church’s third annual “Music on the Mount” concert series. The St. Tikhon of Zadonsk Chamber Choir is an ensemble of Orthodox professional singers under my direction, based at St. Tikhon’s Monastery in South Canaan, PA. The concert will begin at 7:30 p.m. and will feature works by Rachmaninoff, Chesnokov, Trubachev, L’vovsky, and others, as well works by some contemporary Orthodox composers. A wine and cheese reception will follow the concert. For more information about the concert and to purchase tickets, please contact Susan Sulich: ssulich@yahoo.com. The following is an article I’ve written about the program. 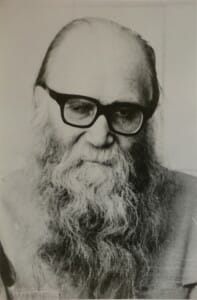 Deep Roots Are Not Reached by the Frost
The Enduring Russian Sacred Choral Tradition, 1830 to the Present

All that is gold does not glitter,
Not all those who wander are lost;
The old that is strong does not wither,
Deep roots are not reached by the frost.
J.R.R. Tolkien

The history of Western European music, and of Western culture in general, is a history of evolution. Anyone who has studied Western music history knows that the strongest emphasis tends to be laid upon those composers and works that broke the mold, that challenged accepted norms, that sparked a flurry of new developments. This thirst for progress in Western European musical culture (at least as seen through the historian’s lens), this urge to throw off convention, this drive to develop, is so deeply a part of the modern Western psyche that it is often all but impossible to speak of things in other terms. And not music only, but art, culture, and the natural world as a whole; all are seen in the Western mind primarily in terms of a great evolution toward some unknown but presumably better end.

Entering into the European musical arena in the late 17th century, Russian musical culture has presented Westerners, and Western historians in particular, with a conundrum. On the one hand, Russian composers were happy to borrow heavily from their Italian and German counterparts—indeed, many of the early generation of westernized Russian composers were trained in Europe and wholly adopted the common European style—but on the other hand, Russian composers from the early generations to the present day neither evinced nor possessed that all-encompassing Western drive to evolve. From the perspective of Western historians, therefore, Russian sacred music (at least until Tchaikovsky), while widely admired, can appear stagnant, underdeveloped, and stiflingly conservative. And if the only measuring stick for artistic achievements were that of evolution, this might be an accurate assessment. However, Russian Orthodox musical culture, founded on more than ten centuries of Orthodox Christianity and its emphasis on the historical continuity of supernatural revelation, holds itself to an entirely different measure: the measure of tradition.

Many Westerners misunderstand this Russian, and inherently Orthodox, notion of tradition, mistaking it for something like habit or convention. Igor Stravinsky, a Russian composer who saw deeply into both the Russian and the European artistic mind, illuminates the misunderstanding thus:

Tradition is entirely different from habit, even from an excellent habit, since habit is by definition an unconscious acquisition and tends to become mechanical, whereas tradition results from a conscious and deliberate acceptance. A real tradition is not the relic of a past that is irretrievably gone; it is a living force that animates and informs the present… Far from implying the repetition of what has been, tradition presupposes the reality of what endures. It appears as an heirloom, a heritage that one receives on condition of making it bear fruit before passing it on to one’s descendants…
(The Poetics of Music, 56)

Western musical culture, with its obsessive focus on the achievements of the individual, has long since ceased to see the usefulness of tradition, viewing its own historical precedents not as heirlooms but as a set of conventions to be overthrown. Russian Orthodox musical culture, on the other hand, deeply concerned with continuity and commonality, holds its tradition as a precious heirloom. And what is the substance of this heirloom? Beauty. While European musical culture, both sacred and secular, relentlessly strove to expand, to discover and to conquer new territory—prizing, in a word, dynamism above all—Russian sacred music steadily received, built upon, and handed down an inheritance of otherworldly beauty.

The upcoming program focuses on this phenomenon of beauty as a tradition, and particularly upon how it has manifested itself in Russian sacred music from 1830 to the present. We chose this period for two reasons: first, because it witnessed some of the most strikingly beautiful compositions in the Russian sacred canon; and second, because it is the period of perhaps the greatest upheaval in the history of mankind, both in music and in the world at large. During this era humanity saw, on the world stage, a massive explosion of technological development, numerous revolutions, two world wars, genocides, and profound social transformation; and in the musical and artistic sphere, the tumultuous rise and fall of romanticism, giving way to what was, in essence, the dissolution of artistic culture to the point where every artist, every composer, became the inventor and sole speaker of his own artistic language. In the midst of all this upheaval—and, what’s more, in the face of the most systematic assault on Christianity the world has yet known: the Soviet period in Russia—composers of Russian sacred music patiently and painstakingly cultivated a tradition of beauty, building upon, rather than rebelling against, the foundations of the past.

The works featured in the program come from an array of composers, some well-known to Western audiences—such as Rachmaninoff—but probably most only familiar to devotees of the repertoire; and likewise, the musical “schools” represented here are various: St. Petersburg, the Moscow Synodal School, the Russian emigrés after the Bolshevik Revolution, and a few works by contemporary American Orthodox composers. However, what is remarkable about these works is not their diversity, but their stylistic unity—the fact that each work, while retaining a unique freshness of character, clearly speaks the same musical language as all the others. This is all the more remarkable in that the works in the program span a period that saw a wild proliferation of musical styles, each one furiously trying to outdo the one that preceded it: Romanticism, Expressionism, Serialism, Neo-classicism, Primitivism, Futurism, Realism, Nationalism, Minimalism, Indeterminacy. The list goes on.

All this is not to say that Russian sacred music has not experienced some evolution. In reality, there have been a number of sea-changes and developments, the most significant of which is probably the introduction of the common European style in the 17th century and the gradual diminishing in importance of the ancient Znamenny Chant in worship. However, unlike the developments that occurred in European music around the same time, these developments in Russian sacred music, especially as one moves into the mid-19th century up to the present day (our focus here), involve more a synthesis with the past and less a reaction against it. A multitude of common elements can be found between old and new: predominantly stepwise melodies; long musical phrases; a strong emphasis on conveying the sacred text; a certain expressive restraint; and perhaps most important, an enigmatic mixture of both joyful and sorrowful emotions within nearly every musical idea. Because of this living connection with the past, composers of Orthodox sacred music today converse easily with the ideas of composers centuries older than themselves, and newer works can be combined with older ones in the context of the liturgy—and often are—without that dizzying sense of eclecticism one might feel on hearing works by Mozart, Aaron Copland, and George Crumb performed one after the other in quick succession.

If you can come listen to the program on May 31, we invite you to try to experience something of this living tradition that animates Russian Orthodox—truly, every kind of traditional Orthodox—music; and try to perceive the divine beauty that lies within its depths. This requires focused attention and effort, but the struggle is richly rewarded.