On History and Tradition: A Review of Cappella Romana’s “Good Friday in Jerusalem” 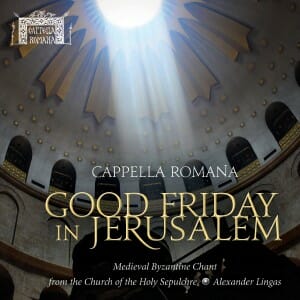 For makers of music, history, by its mere existence, presents challenges. A recent headline in the Onion ran, “Nation’s Historians Warn The Past Is Expanding At Alarming Rate.” While we can smile at the joke, there’s a way in which the specter of an “ever-enlarging past” does really keep musicians up at night. Every Western composer since Beethoven has had to grapple with the problem of originality. Composers before Beethoven didn’t seem to worry very much about whether or not their work was original—the best composers were often notorious borrowers and recyclers, sometimes directly plagiarizing the works of other composers—and thus a Handel or a Haydn could blithely churn out 49 operas or 106 symphonies without raising any eyebrows. However, with Beethoven came the drive to always create something groundbreaking, as well as a concomitant self-consciousness of one’s own place in history. This kind of self-consciousness, once learned, is inescapable. For composers, therefore, history can represent a set of closed doors, a series of checked boxes, an ever-diminishing supply of new possibilities.

For performers of music as well, history presents difficulties, though slightly different ones. Until Beethoven (why does it always come back to Beethoven?), most people expected to hear “modern” music when they went to a performance, in much the same way that filmgoers today naturally expect to see a new movie when they go the theater. After Beethoven, however, musicians and audiences started looking backward, and this retrospective tendency has only increased with each passing generation. As Alex Ross recently quipped in an article in the New Yorker, “The professional orchestra arose, in large measure, as a vehicle for the incessant performance of Beethoven’s symphonies.” Performers, therefore, have increasingly had to deal with the problem of familiarity. As musical audiences have come to expect less and less innovation in the realm of repertoire, performers have had to stretch further and dig deeper to find ways of keeping old repertoire alive and communicative.

One interesting way that performers found to sidestep the problem of familiarity was to start looking farther back in music history than they had ever done before. Before the 1970s, “early music” meant “Bach” to most people. However, an early music revival movement, which had been gradually building steam through the 19th century (after Beethoven, of course), exploded in breadth and popularity in the late 1970s. Names like Monteverdi, Couperin, Ockeghem, and Hildegard of Bingen—largely forgotten by all but scholars—became common property once again, and started selling records; groups like the Tallis Scholars, the Academy of Ancient Music, and the English Baroque Soloists built sterling international reputations solely on the performance of early music.

While looking deeper into the past offers a creative solution to the performer’s problem of stagnating repertoire, opening up as it does vast new horizons of little-known masterworks, the early music revival also poses new problems for performers. Cut off by centuries from the cultural milieu of the composers whose works they were reviving, performers began asking the very reasonable question, “How would this music have been performed back then?” Whereas before performers had focused mainly on technique and interpretation when approaching a piece, now, with the rise of ideas like “period performance,” and “historical performance practice,” performers had to start thinking about whether or not their efforts were historically valid. For many musicians, these efforts were and are simply aimed at gaining a deeper understanding of a piece and its context, and beautiful performances are the result. However, for some musicians, the quest for historical correctness can become something of an idée fixe. In such cases, so far from discovering something beautiful, one is left with the impression of a sort of sonic wax museum where everything is exactly in its place but nothing is alive.

And this, therefore, is the central question: How can music be alive? Notice that I don’t say, How can we make music be alive, because music, like any living thing, once dead, is not normally something that can be reanimated. Music is a language, in many ways very similar to a spoken language: as soon as living people stop speaking it, no matter how many written monuments may be left for posterity, the language ceases to be a living one. Even if an entire culture were to agree revive a language and make it its own, it would still, in effect, be just that: a culture that had decided to revive the language of an older culture that no longer exists. In the same way, for a musical language to be alive, it must be something that is still an active medium of communication from one living person to another; a medium in which composer, performer, and listener all understand one another instinctively and unselfconsciously. This is not to say that a living musical language necessitates that we only listen to the works of living composers; this is no more true than it would be to say that a living language requires that we read only the works of living authors. However, just as with a spoken language, it is necessary that there are living composers that everyone instinctively understands, and that these living composers have the ability to converse on an equal footing with dead ones—and, if it were possible, vice versa. When this process ceases to occur among living people, for whatever reason, the musical language dies.

What we are talking about here is the phenomenon of a musical tradition. Jaroslav Pelikan famously remarked that “Tradition is the living faith of the dead” (The Vindication of Tradition). Tradition is a phenomenon that exists in an unbroken continuum between past and present, between living and dead. In one of his Harvard lectures during 1939-40 academic year, Stravinsky asserted that

A real tradition is not the relic of a past that is irretrievably gone; it is a living force that animates and informs the present […] Far from implying the repetition of what has been, tradition presupposes the reality of what endures. It appears as an heirloom, a heritage that one receives on condition of making it bear fruit before passing it on to one’s descendants (The Poetics of Music, 56).

What makes music is alive, then, is its connection to a living tradition.

This week, Cappella Romana released its latest CD, Good Friday in Jerusalem. Over the past twenty years or so, Cappella Romana and its artistic director, musicologist Alexander Lingas, have been steadily building an international reputation for themselves in the early music world as the pre-eminent interpreters of medieval and post-medieval Byzantine Chant. Standing alongside groups like Ensemble Organum and the Hilliard Ensemble in terms of purity of tone and pitch, elegance of phrasing, and expressive clarity, Cappella Romana stands alone, I think, in their approach to the knotty problem of musical tradition. While most interpreters of early music must necessarily come to their centuries-old repertoire from the outside, Cappella Romana, whose founders and many of whose members are active Orthodox church musicians, has made a conscious decision to work primarily in repertoire that in some way relates to the still-living musical traditions of Orthodox Christianity. Not only singing Byzantine music—though this is principally where they’ve made their mark—Cappella Romana’s oeuvre spans a broad range of music history, from the earliest decipherable Byzantine manuscripts to 19th century Russian music to works by contemporary Orthodox composers such as Fr. Ivan Moody or Peter Michaelides. This in itself is not remarkable, but what is remarkable is the way in which the group manages to convincingly establish that all these things are somehow organically connected. And indeed, these various styles and periods are organically connected through the living tradition of Orthodoxy.

Good Friday in Jerusalem is no exception to the level of quality that audiences have come to expect from Cappella Romana’s recordings; the singing on the disc is at once rich, incisive, alive, and achingly beautiful. The repertoire is a compilation of various medieval Byzantine manuscripts of hymns from the Matins of Great and Holy Friday, organized according to a 10th-century order for the celebration of the service from the Church of the Holy Sepulchre in Jerusalem. The service is the direct liturgical ancestor of the service Orthodox now know as the Twelve Passion Gospels; anyone familiar with the current form of the service will recognize many common elements on the disc. However, rather than giving off the nostalgic aroma of a historical reenactment, as such projects often do, this recording left me with a clear sense that these old chants are truly liturgical, containing all the immediacy and authenticity of heartfelt prayer. The music here may be medieval—and medieval Byzantine chant does have some markedly different qualities from the Byzantine chant we hear today—but nothing about it sounds in the least anachronistic. So far from throwing the listener into a reverie of days gone by, the music on this disc invites the listener to enter deeply into the drama of Christ’s Passion and to experience it as a present, immediate reality. This kind of direct communication with the soul is what music is for, I think, liturgical or not.

The fact is that Byzantine chant is a tradition that is still growing and changing, like any living thing, and so the old and the new remain connected. In this way, a recording like Good Friday in Jerusalem has the capacity to inspire and influence the work of living composers of Byzantine chant, and it should. Even though some of the music on this disc is separated from today’s composers and chanters by nearly nine centuries, it is clear that both speak the same musical language and share the same musical culture in a deep way. It’s a sign of an ailing tradition when an encounter with the past causes us to merely look back over our shoulders and pine after some imaginary golden age, but it’s a sign of a healthy tradition when an encounter with the past has the effect of invigorating and informing us, encouraging us to produce new fruits.

I have no doubt that history will continue to challenge musicians. We live in an age where once-living musical traditions seem to be dying constantly. Classical music is proclaimed to have died (though I’m not quite ready to believe it yet); Jazz has been ossifying since the 1980s; even Rock and Roll now finds itself as fodder for college history courses, and aging rockers tour the globe performing songs they wrote fifty years ago, to audiences no less gray than themselves. But in a living musical tradition, music being old is not in itself a problem, no more than the inner rings of a tree present a problem to the branches. In the context of a living tradition, the old and the new are one, with the old continuously watering the new at the same time as the new keeps the old alive. As long as Cappella Romana continues its work, there is good hope, I think, that the Byzantine chant tradition will not only stay alive, but will grow and thrive for some time yet.