Cappella Romana to Sing “in Hagia Sophia”, in California

Cappella Romana will be singing two concerts, Friday and Saturday nights, at Stanford University in California. Friday’s concert in Stanford’s Bing Concert Hall,”From Constantinople to California”, will by the wonders of acoustic technology, replicate the reverberative sound of the Great Church itself (read about the fascinating method employed below). Those lucky enough to have gotten tickets to the sold-out event will be treated to a sound not heard in almost 600 years. Saturday”s performance will be sung in Stanford Memorial Church (with the building’s own naturally beautiful acoustics), and will feature the Chants of Holy Friday in medieval Jerusalem. Tickets for this performance are still available. Read more about these two performances below.

Editorial Note – The following is reproduced from Capella Romana, with the permission of Mark Powell, the ensemble’s executive director. 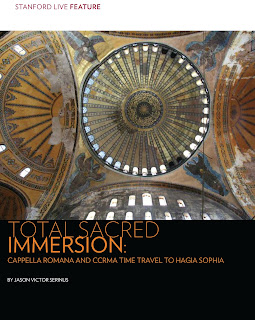 Stanford Live Magazine has a fantastic article chronicling the process of re-creating the Hagia Sophia in our upcoming “From Constantinople to California” performance. Read the introduction by author Jason Victor Serinus here, and then find the full article at www.livelyarts.stanford.edu!

The universe may have begun with a big bang, but Cappella Romana’s February 1 concert, presented by Stanford Live in Bing Concert hall, truly began with a big pop. Four balloon pops, to be precise, recorded during trips to the remarkable acoustic and aesthetic environment of Istanbul’s Hagia Sophia (hAh-yuh soh-FEE-uh), the largest and grandest church of sixth-century Byzantium.

Each balloon’s initial explosion and subsequent 10- to 11-second sonic decay was recorded by two omnidirectional microphones positioned above the ears of Bissera Pentcheva, an associate professor in Stanford’s Department of Art and Art History who
focuses on the aesthetics and phenomenology of Byzantium and the medieval Mediterranean. Then, the recordings were analyzed by Jonathan Abel, a consulting
professor at the Center for Computer Research in Music and Acoustics (CCRMA,
as in karma) in Stanford’s Music Department. Working in conjunction with CCRMA, graduate student Miriam Kolar—who was in the midst of re-creating the aural
experience of rituals held in Peru’s ancient ceremonial center at Chavín de Huántar—constructed a mathematical model of the remarkably resonant acoustic of Hagia Sophia…