I believe Dr. Cornelia Tsakiridou’s book, Icons in Time, Persons in Eternity, published by Ashgate press in 2013, is one of the most important books about icons published since the classic work, The Meaning of Icons, an audacious claim given the monumental nature of Ouspensky’s and Lossky’s work. 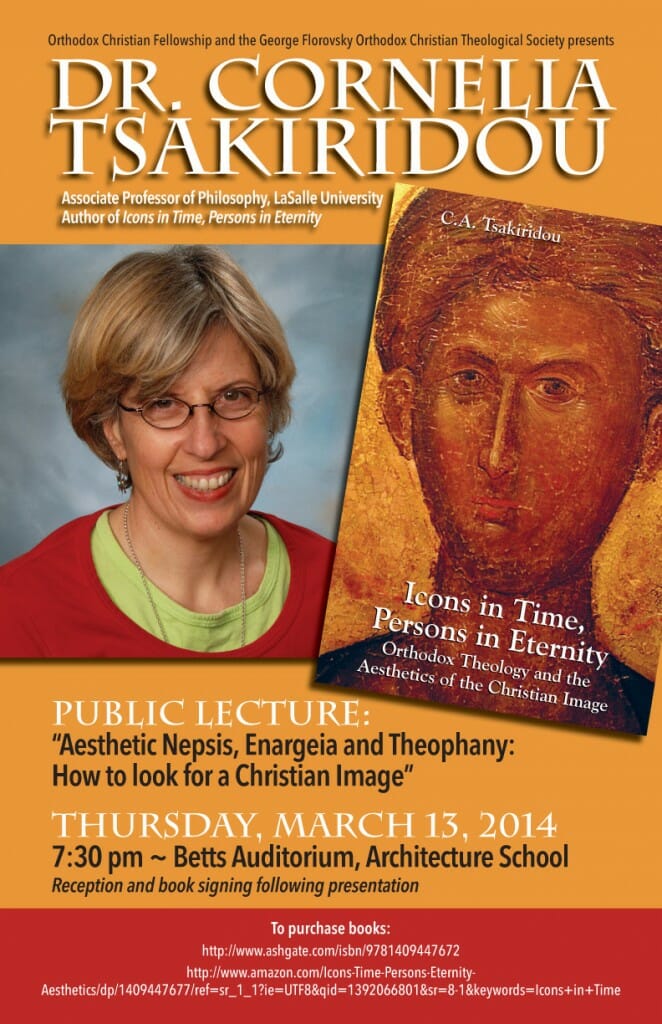 Icons in Time, Persons in Eternity asks a big question:  Is there something in the icon itself, outside of the accretions of cultural history, theological controversy, art history or any other category one might put on the icon, that would speak to the viewer.  In other words, how does the icon speak to the viewer on a spiritual level from a purely aesthetic perspective?

Dr. Tsakiridou lays the groundwork well.  She explores the ascetic milieu out of which an icon is created, showing that ascetic discipline is intimately related to the Orthodox faith and therefore to the icon.  She discusses ideas in modern art that seek similar but not the same truths as the icon and uses them to parse out nuances of what the icon is and does.  She appropriates a Greek word to express the “presence” of some icons and not others; “enargeia.”

Dr. Tsakiridou herself is quite humble about her ideas.  I learned her story over lunch and she is a compelling person.  Raised in Greece, she came to the United States to further her education.  She received an MA in history from Temple University in Philadelphia and a Phd in Philosophy from Georgetown in DC.   Her early work focused on aesthetics, photography and modern art, flirting with the icon around the fringes.

Family crisis lead Dr. Tsakiridou down an unexpected path.  Having grown up in a mostly secular Greek home she was not particularly religious.  Through a crisis, visits to some monasteries, Dr. Tsakiridou’s national, cultural “faith” became energized into a real and lively faith.  With this new interest in the church and her aesthetics’ background, plus some prompting by monks, Dr. Tsakiridou became captivated by the icon.  This book is her “coming to terms” with the icon.

Icons in Time, Persons in Eternity is a book that expands the discussion surrounding icons.  It is not simply an art history book, a religious history book, a theology book, an Orthodox catechesis book or an exposition-of-personal-experience-with-icons book.  It is a long overdue book taking a thoughtful look at the icon qua icon.  In this sense, this is the continuation of what Ouspensky and Lossky started, the ongoing reclamation of the icon.

Dr. Tsakiridou will give a lecture at Princeton University on Thursday evening, March 13th.  It is at 7:30 pm, in Betts Auditorium of the Architecture school.  There will be a reception to follow.   All are welcome; it is free and open to the public.  The lecture is sponsored by Princeton’s Orthodox Christian Fellowship and Florovsky Society.