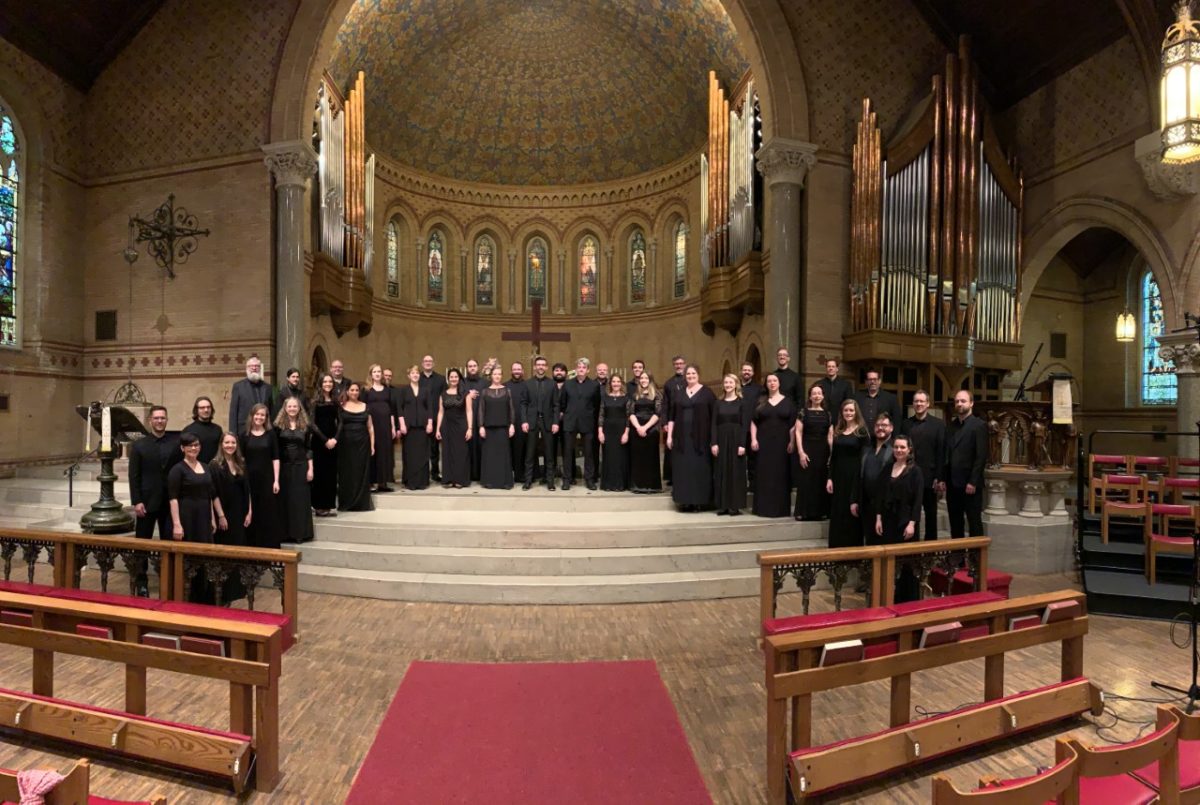 In the past thirty years, I have attended almost 7000 liturgies in the United States, Canada, Russia, and Greece. Some of these have been in small candlelit chapels in the desert of Mount Athos; others have been in magnificent imperial monasteries with a thousand years of history. I have beheld liturgies celebrated by patriarchs and liturgies celebrated by saints. But in terms of the musically sublime, I have never experienced anything so breathtakingly beautiful, so transparently luminous, so close to that border between heaven and earth as the premiere performance of Benedict Sheehan’s Liturgy of Saint John Chrysostom. There were moments during that performance that were so full of eternity, so full of wonder, so expressive of the “power of God and the wisdom of God,” that words, even as enthusiastic as these, fail to do justice to an experience in some way akin to that of the emissaries of Saint Vladimir who “knew not whether they were in heaven or on earth.”

My experience was by no means unique. The performance not only concluded with a standing ovation by an audience whose palms were long past being sore from enthusiastic clapping, but also with a change in the now radiant countenance of those whose hearts were visibly touched. The tears in the eyes of the listeners, the tears in the eyes of the singers, all bore witness to the shared experience of a reality that added something to each life, confirming the possibility of meeting God in a space of beauty and holiness created by an inspired composition and an inspiring performance. There happened to be a famous rock star attending the concert. He was also left speechless before a beauty that he found frankly overwhelming. 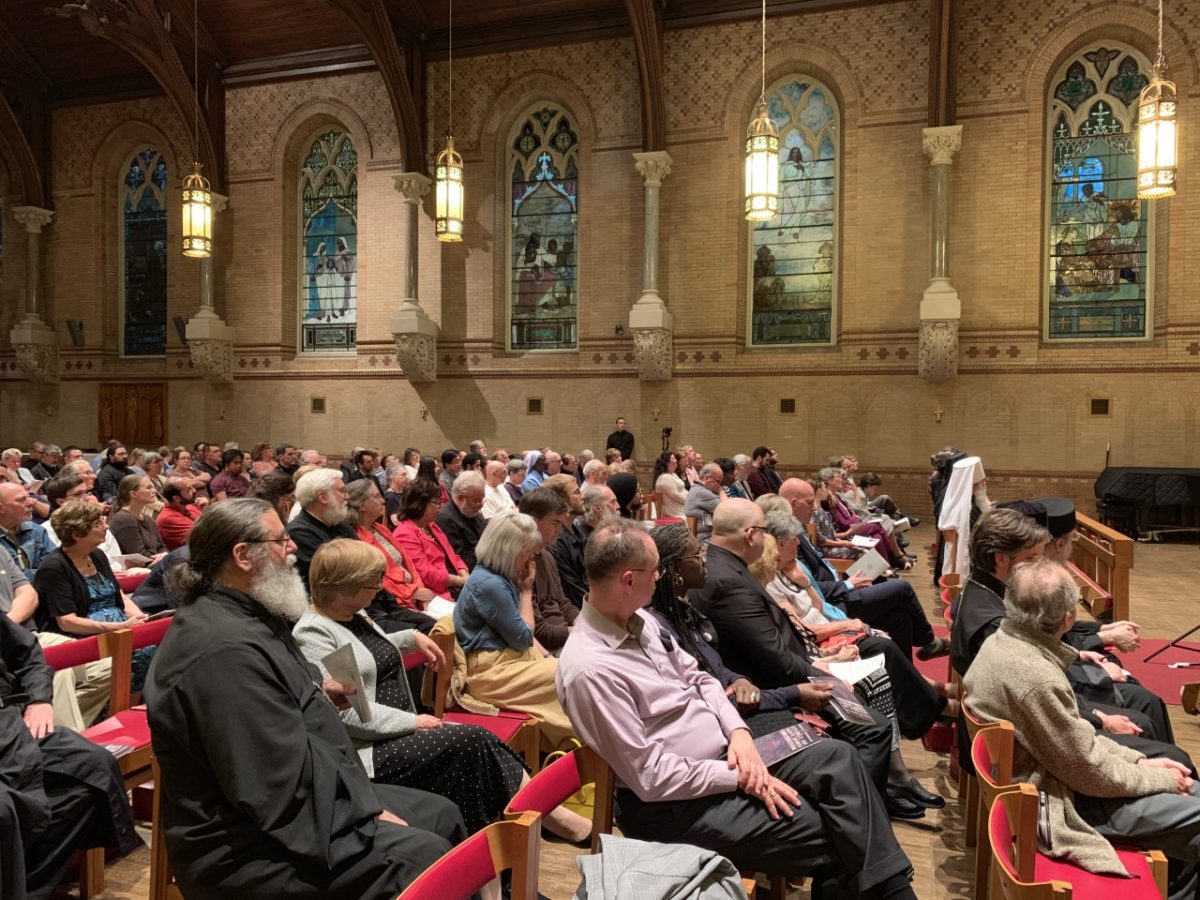 It is worth noting that the audience and the ensemble were not composed solely of Orthodox Christians, but, nevertheless, each soul present understood the language of beautiful music that enabled us all to hear the sacred words of the Divine Liturgy and take home something precious from those words. The music had brought us a moment of union in our world of polarity with an almost eschatological sense that indeed “all nations shall come and worship before Thee” (Rev. 15:4). We all felt the power and understood the significance of hearing meaningful words in a meaningful way, especially in this world rife with hate speech, inane chatter, and so much talk that is no more than noise.

The bar for Orthodox liturgical music in the English-speaking world has now been set, definitively. Benedict Sheehan is the composer, but the treasure is now ours. Ambitious choirs from any (or no) religious background will no doubt aspire to perform selections from his composition, and that will certainly be a worthwhile endeavor. But this work is especially meant to inspire choirs in the Orthodox Church. Some may object that the amount of skill required to sing this Liturgy is too high for the choir of any Orthodox parish in the United States. And that is, at present, true. Christians, however, believe that “with God, all things are possible.” Christians believe that ours is the “God that doest wonders.” If we work with Him, no aim or goal on earth can possibly be too high, especially for those whose aim is nothing less than heaven above. Can this liturgy be sung in an Orthodox parish? Of course, it can. And in fact, it will be sung in October in the primatial Cathedral of Saint Nicholas in Washington, D.C.

Benedict Sheehan’s composition will undoubtedly touch the hearts of many Christians in the days to come. Christians are a people who know that there is nothing more beautiful, more holy, more precious, and more wonderful than Christ. And they know that there never could be. Out of love for Christ who has loved them unto the very end, they are called to respond to Him by offering Him the most beautiful music, the most beautiful art, and the most beautiful lives that that they possibly can, knowing full well that there is no myrrh sufficiently precious with which to anoint Him. By the grace and mercy of God, Benedict Sheehan has been able to give us all some precious myrrh to offer our most beloved Lord. May choirs throughout the country aspire to do just that. And to the incredulous reader, I can only suggest that they heed Philip’s words to Nathaniel, “Come and see” or rather “Come and hear,” for the heavens still open and the angels of God still ascend and descend on the Son of man.

On May 26, 2019, the Saint Tikhon Choir presented the world premiere of Benedict Sheehan’s Liturgy of St. John Chrysostom, under the direction of the composer. The seventy-minute work was commissioned in 2015 by the Patriarch Tikhon Russian-American Music Institute as part of an effort to add significant new works to the English-language Orthodox repertoire. The choir recorded the Liturgy for commercial release in the days following the premiere. Release is anticipated late 2019 or early 2020. Sheehan is currently in negotiations with several publishers regarding publication of the score. Details of both CD release and score publication will be posted on OAJ as soon they become available.