March 29, 2019A Constellation of Chandeliers – Some Recent Lighting Projects

A Choros Chandelier for a Timber Frame Church 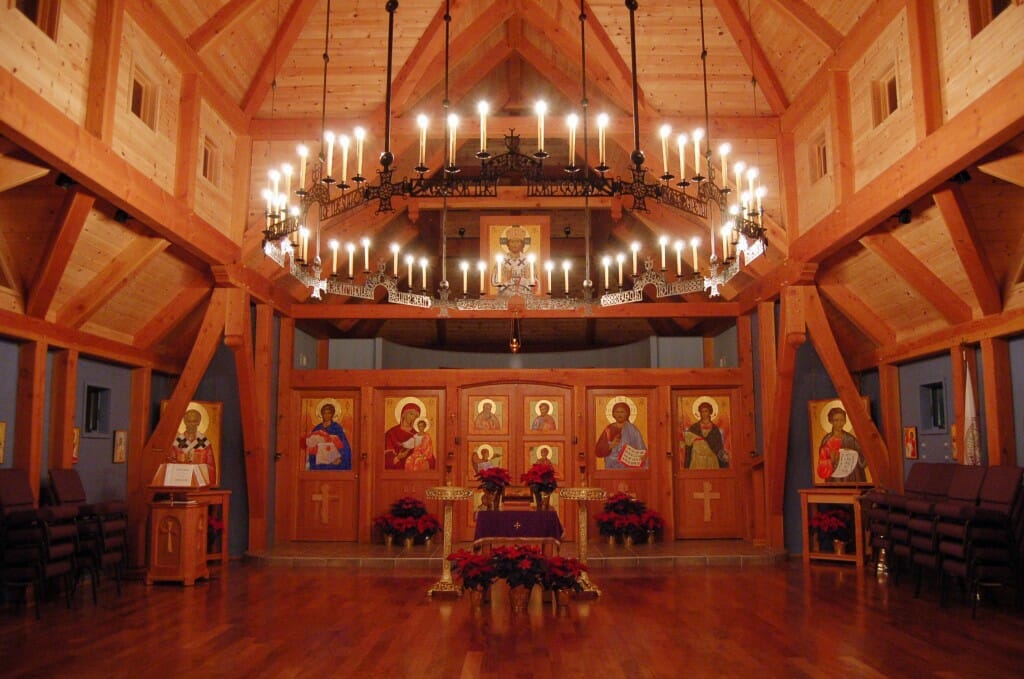 During the fall and winter of 2013, I had the marvelous opportunity to make and install a choros chandelier for St. Thomas the Apostle Orthodox Church in Waldorf, Maryland (a parish of the American Carpatho-Russian Diocese). The project was my second large articulated choros (the first, in South Carolina, was described in this article from 2012).

St. Thomas Church was built very recently, consecrated just last summer. It is outwardly modelled upon Carpatho-Russian architecture, but is structured using timber frame, fully exposed on the interior. This system makes for a warm and complex space with the simple handcrafted beauty of an old barn or English cottage.

In considering a central chandelier for the nave, I advised the parish that a medieval Byzantine style of fixture would suit it well. There is a square of heavy wooden beams at the base of the central cupola that serves as an ideal attachment point for the eight chains of an octagonal choros. I was able to obtain exact drawings of the beams from Lancaster County Timber Frames, who built the structure, and I designed a custom fixture to fit the dimensions of the cupola.

As with the South Carolina choros, my design is partly inspired by the fretwork detailing of the 13th-century ‘Munich Choros’. But St. Thomas is a smaller church, and the ring worked out to a 13-foot diameter octagon. These proportions suggested also using the medieval choros at Decani in Kosovo as a model; its ring is embellished with arches, very-slightly horseshoe shaped, which lend a splendid crown-like elegance to the octagon. 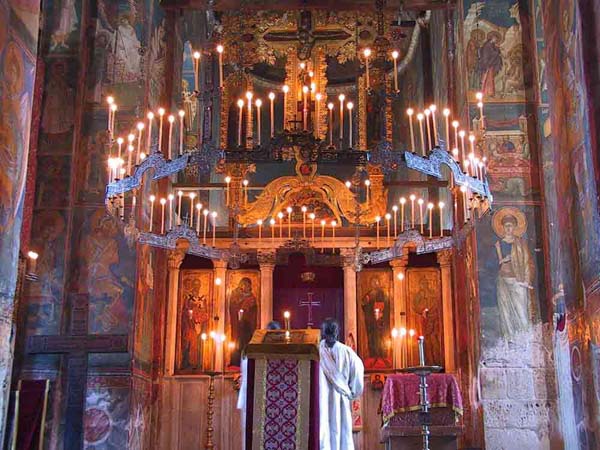 The choros at Decani Monastery, Kosovo

Each of the eight bars is unique. Winding through an ever-changing progression of ornamental foliage and beasts is an inscription from Revelation 21:5 “There shall be no night there; and they need no candle, neither light of the sun; for the Lord God giveth them light: and they shall reign for ever and ever.” This use of this verse on a chandelier has precedent in ancient Romanesque art, and it is fitting to the Orthodox idea of every church as an outpost of the Kingdom of God, shining from within with the light of God’s grace.

Original Byzantine fixtures usually have rather simple and repetitive ornamentation to the fretwork. I feel this is an area where it is possible to improve on the originals. I drew my inspiration here from medieval Russian and English metalwork, where interlace, fantastic beasts, a diversity of leafy foliage, and highly decorative lettering can often be found. I designed the inscription using English letters that have the vertical rhythm and dense ligatures of old Slavonic inscriptions, and I interposed the words with ivy and vines, dragons and unicorns, symbols of paradise, and motifs that illustrate the words nearby. This progression of ornament and lettering makes the whole choros seem to scintillate with life upon first glance. From a distance there is an appearance of mystery and complexity to its design, which only grows in delight as one looks closely and discerns the meaning of the design. 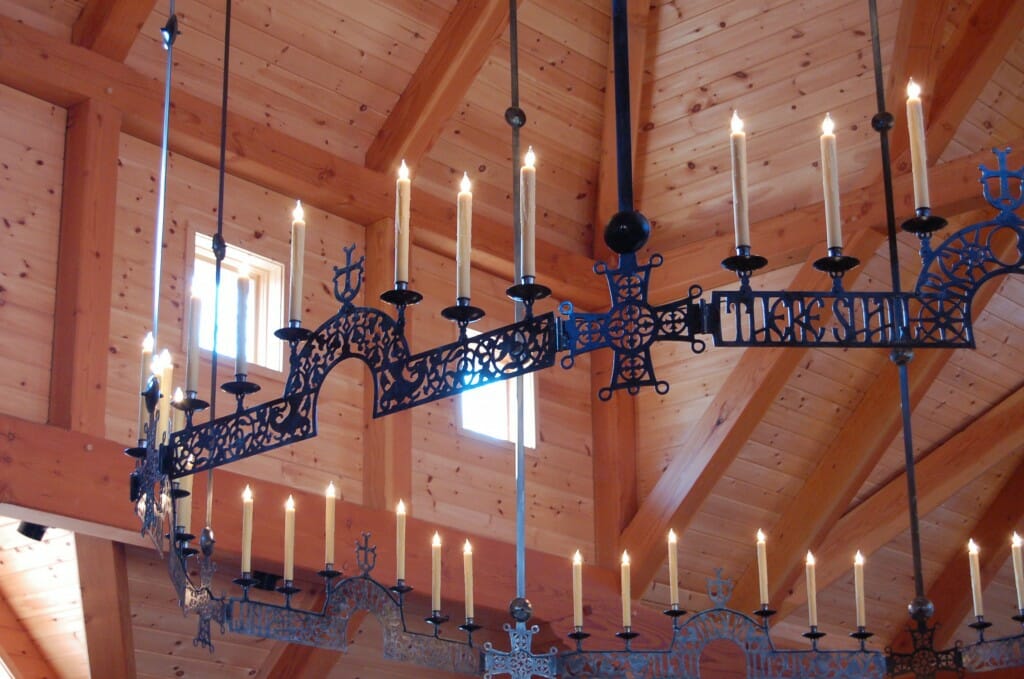 Each of the ornamental components was cut from steel by a computer-guided plasma cutter and smoothed with hand-grinding. In my workshop, I welded and finished the parts and applied chemicals to oxidize the steel to a rich blue-black color. The week before Nativity I flew to Maryland and personally installed the fixture – a delicate process involving a laser level and many fine adjustments to make it hang level and true. This choros is electrified, holding forty-eight sockets with 7.5 watt miniature bulbs that give off a delicate golden light very similar to that of candles. Much of the wiring needed to be done during installation in order to keep the wires continuous and concealed from one segment to the next.

The choros has a remarkable effect upon the feel of the church. After it was installed, the nave feels bigger and taller, because the choros adds a dimension of depth and layering. The nave also feels more centered and centripetal – the focus is on the center of the space, and one’s attention is always drawn there, rather than outward to the roof and walls. This change to an interior focus makes the nave feel substantially more like a sacred and liturgical space and wholly erases the cavernous barn-like quality that the structure had formerly suggested. 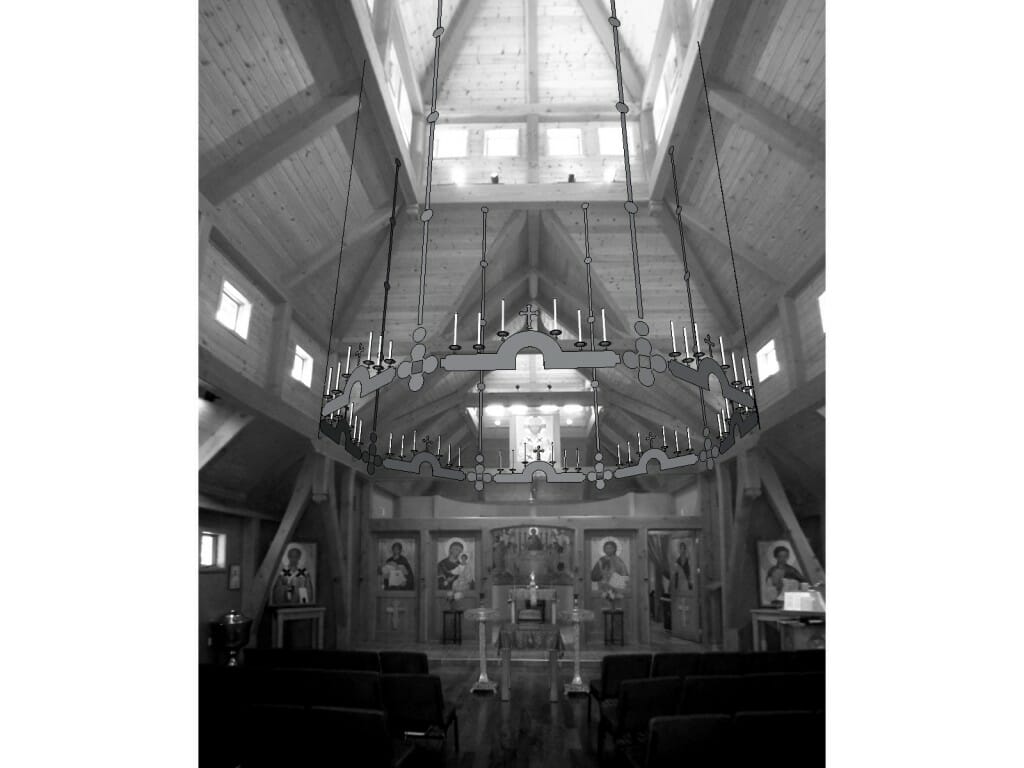 The design process began with a 3-D computer model of the choros superimposed over a photograph of the space. This allowed me to gain a sense of the scale and presence of the fixture. 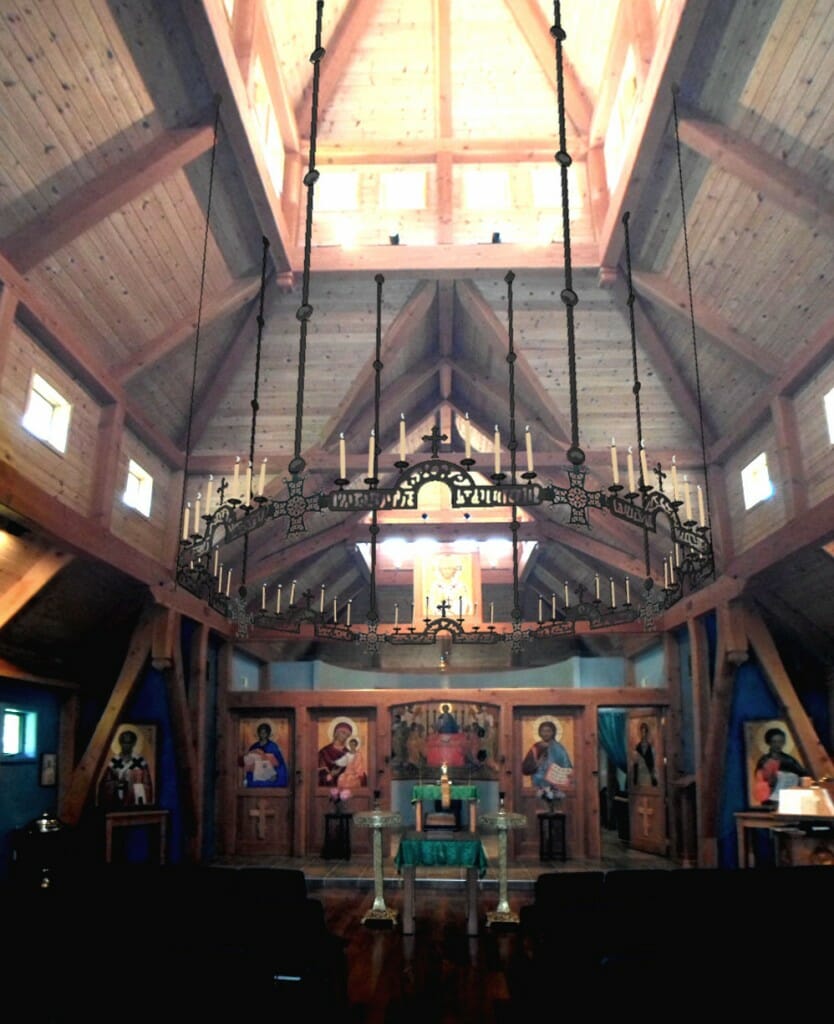 Using Photoshop, I drew in additional details to make a somewhat realistic rendering of how the finished chandelier would look.

Next came the hard work – detailed drafting of every letter and leaf on all eight segments, culminating in this final design for the fretwork. 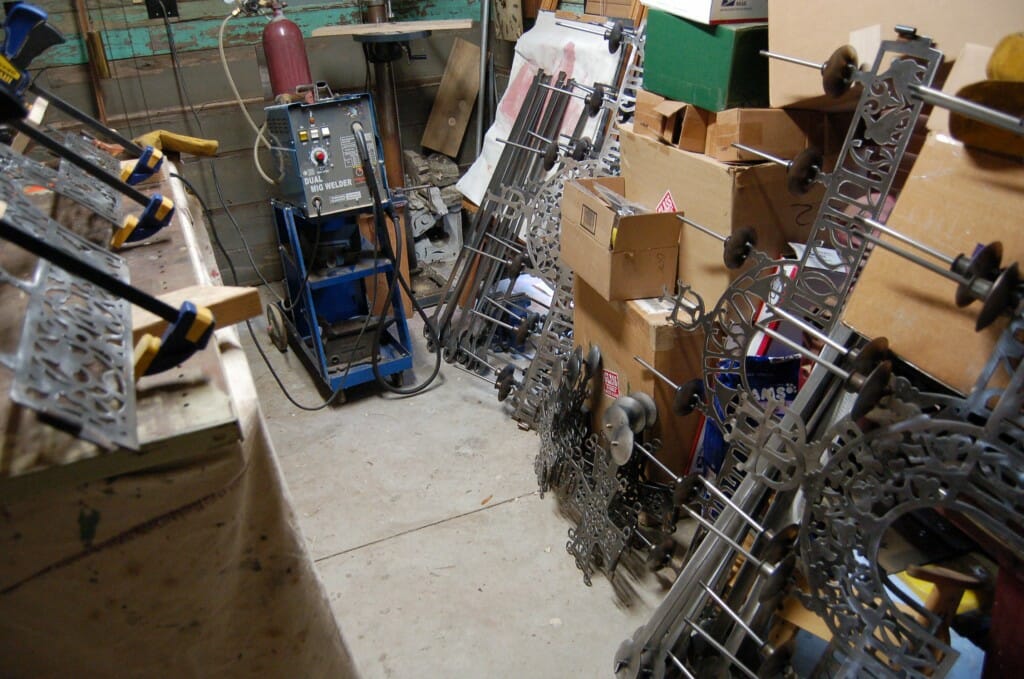 The parts completely filled my little workshop during welding. 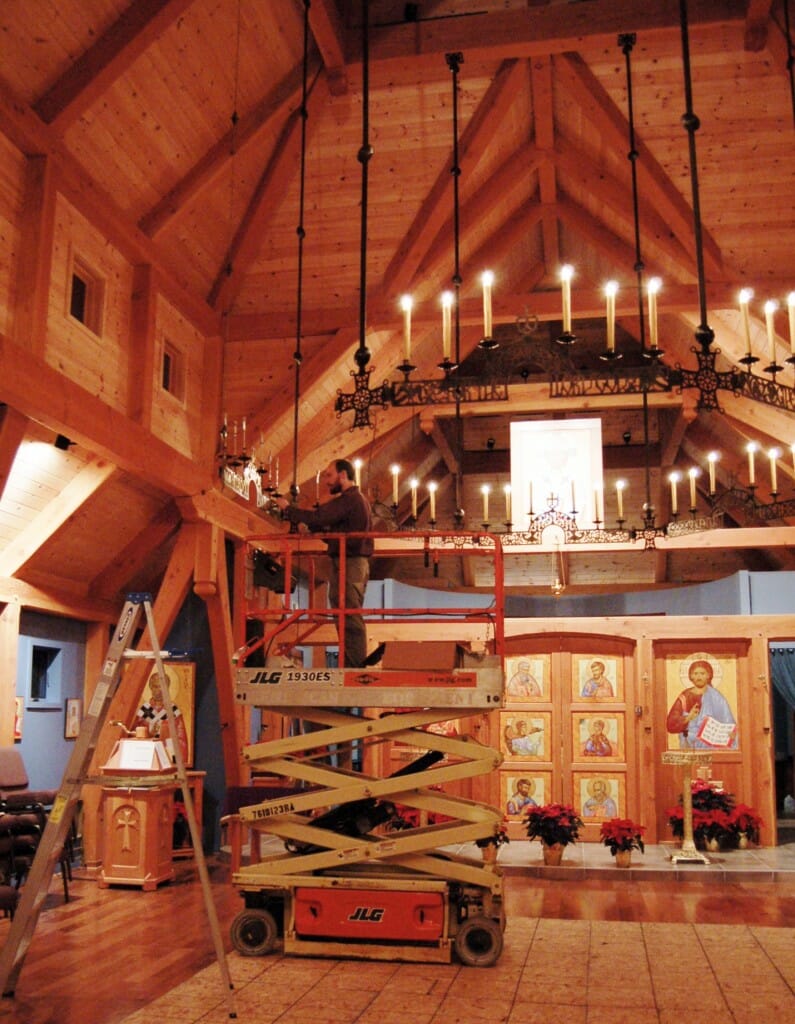 Installation at the church a week before Christmas. 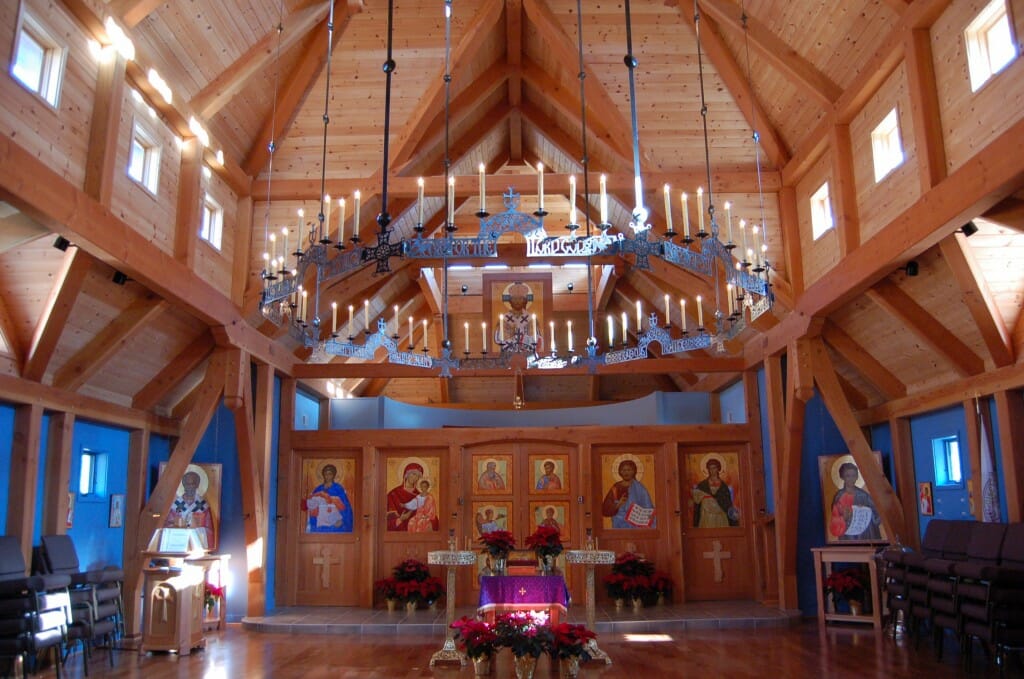 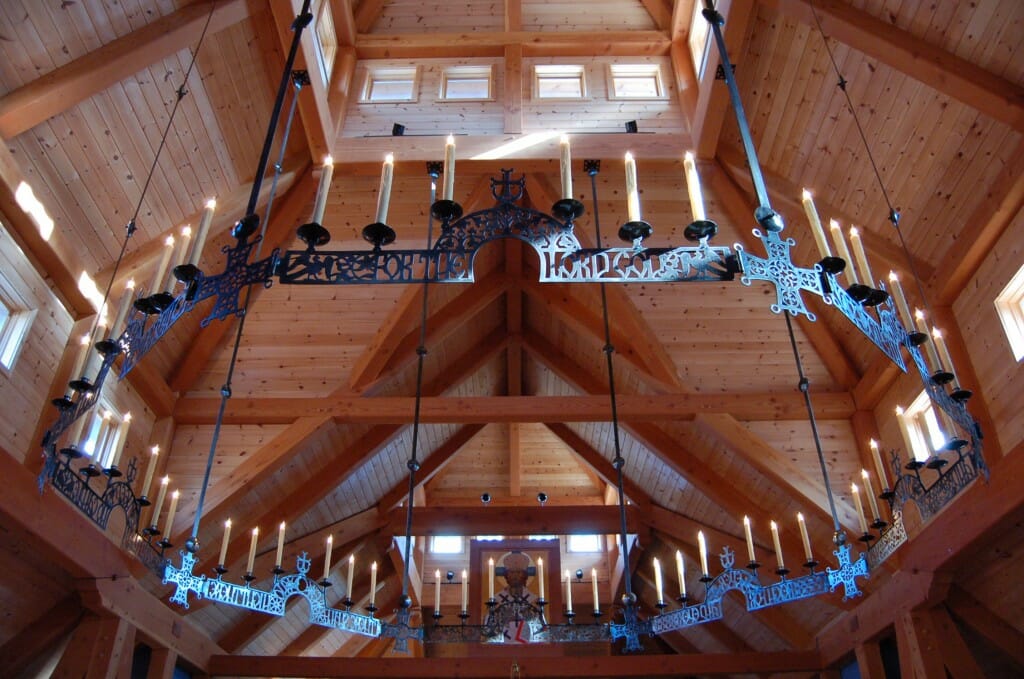 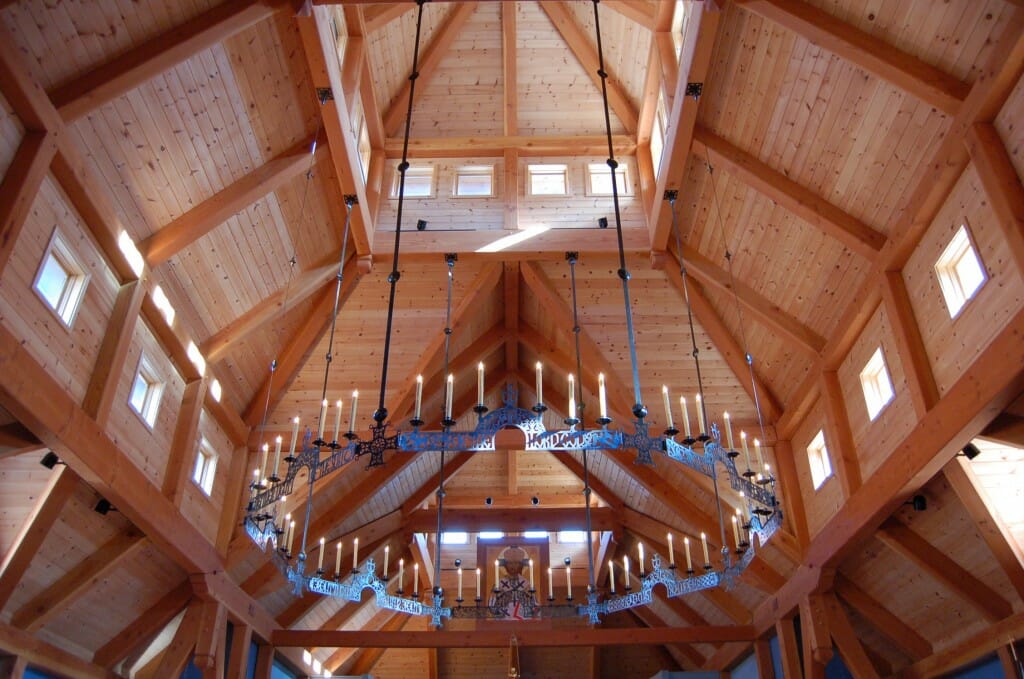 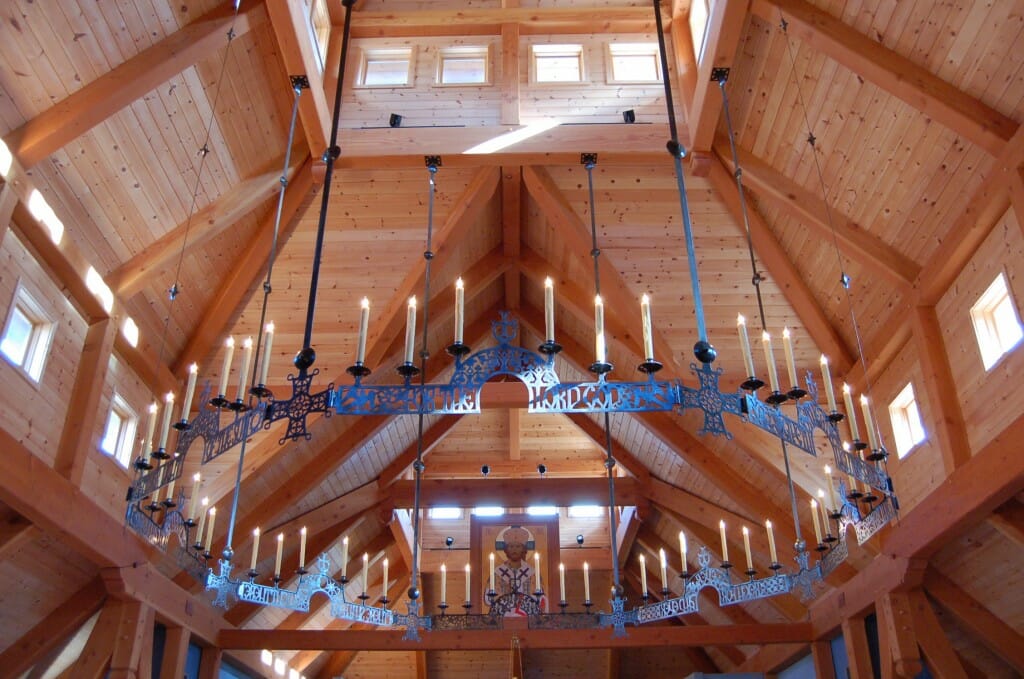 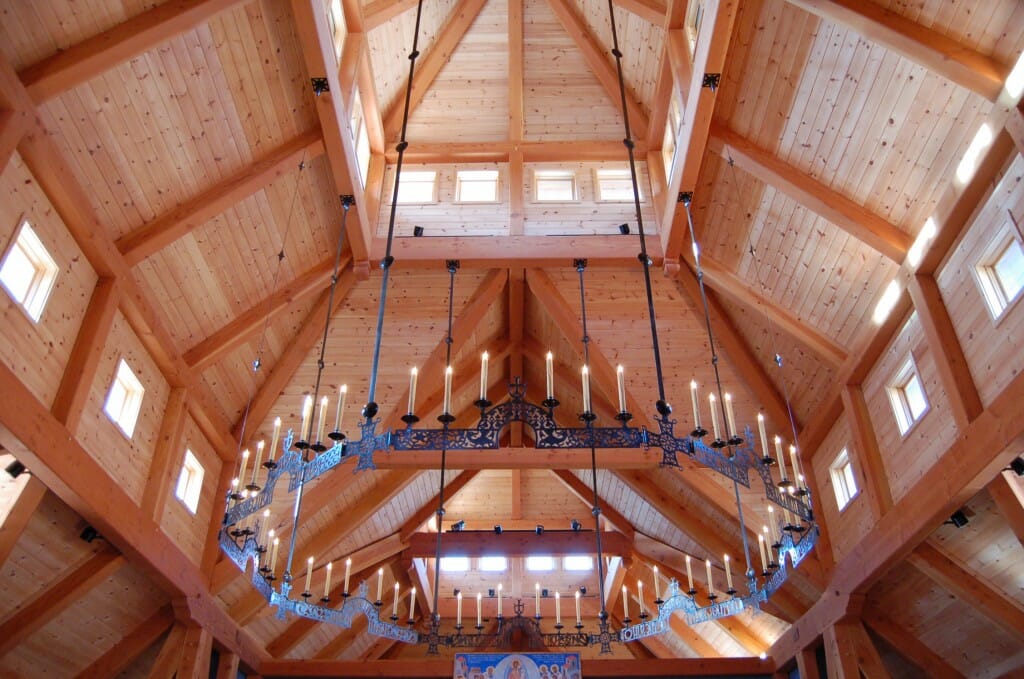 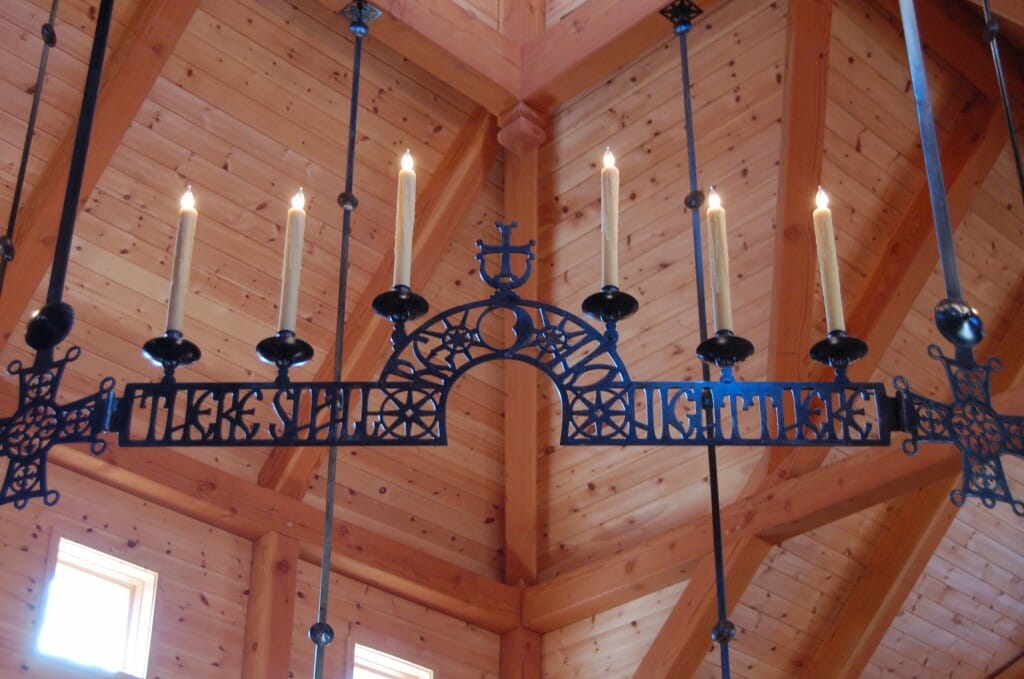 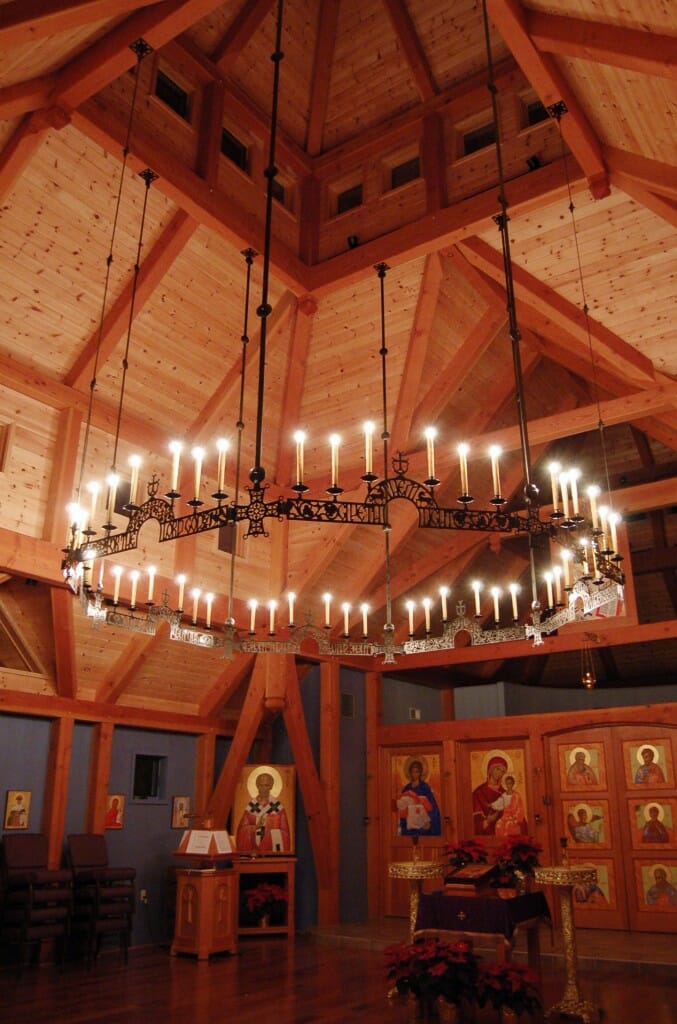 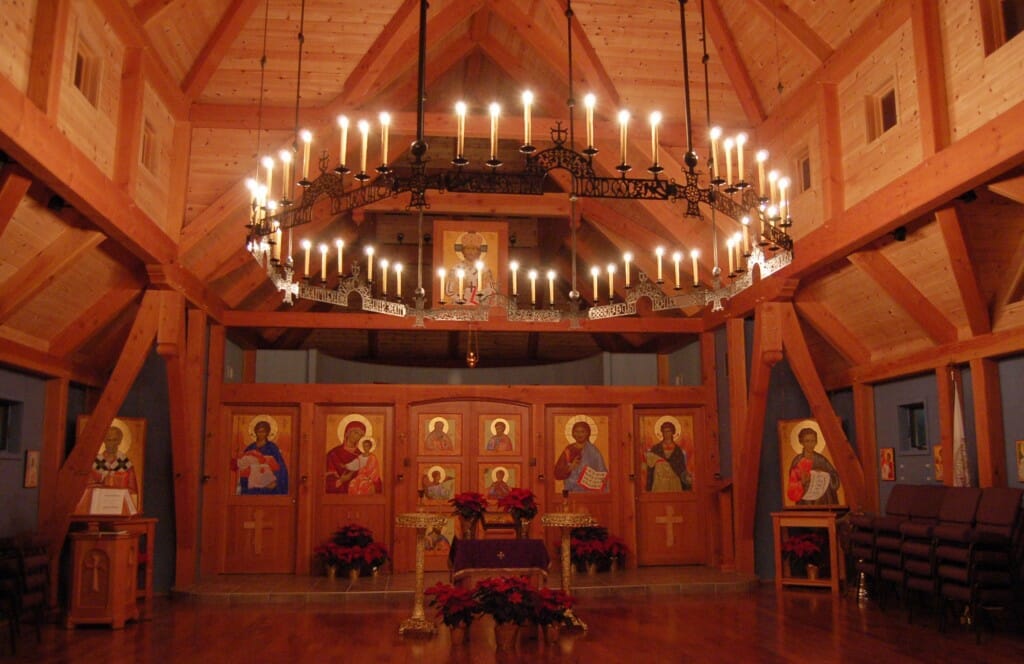