May 7, 2018The Making of a New Icon: “Christ Breaking the Bonds of Animal Suffering”

October 24, 2014An Icon of the Kingdom of God: The Integrated Expression of all the Liturgical Arts – Part 11: Gardens, Churchyards, and Cemeteries

Editor’s note: This is the first part of a talk given by Aidan in Texas last December (1). Images are taken directly from his presentation.

We are made to be gods by grace, sons and daughters of the Living God. If we only saw what majesty and dignity is bestowed upon each of us here tonight we would bow down in reverence to one another. We are created for Paradise, and we long to return to our homeland. We are created to love our Maker and so, as St Augustine of Hippo wrote:

You have made us for Yourself, Lord, and our heart is restless until it rests in You.(2)

All man’s cultural endeavours and economic pursuits are, I believe, fuelled by this inner longing. These pursuits themselves may be and sadly too often are misdirected, for though we feel the longing we do not know what it is for. We repeat the sin of Adam by expecting created things in and of themselves to satisfy our longing for the Divine.

If we are to solve any of our problems in art, ecology and community, we need to understand better this nostalgia that drives us to search and work and make. 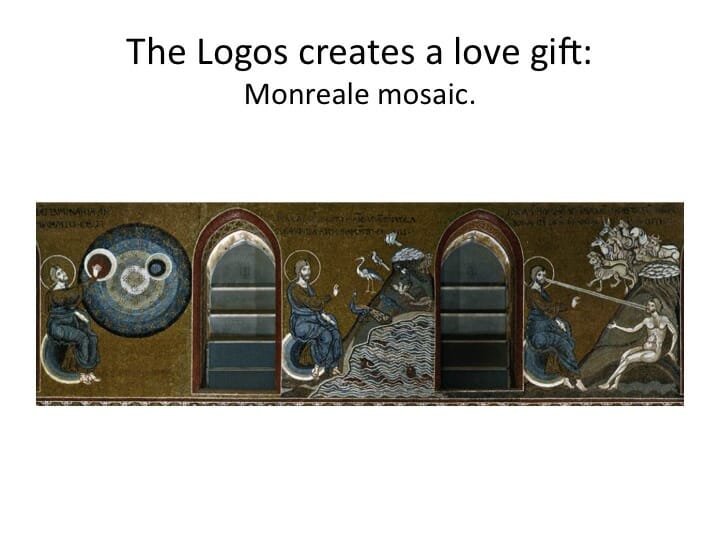 All the wonderful things in the universe are icons or images of divine love, an engagement ring pledging the love of God to us, awaiting our response: Yes, Lord, I will marry you. Sin is simply missing the point by taking the engagement ring of creation’s beauty, turning our back on the Giver, and forgetting that it is His pledge and proposal of marriage.

St Irenaeus, a second century saint of Gaul, said that when God created us and placed us in the garden of Eden he gave us a task: to become gods. He wrote:

We have not been made gods from the beginning, but at first merely men, then at length gods…(3)

This union with God is not of course something within the power of man. It is only possible through God’s descent. But nevertheless, it requires our freely offered participation to become reality. Irenaeus again:

Through His transcendent love the Word of God, our Lord Jesus Christ, become what we are that He might bring us to be even what He is Himself.(4)

When God created us and placed us in Paradise, the first stage in this task was to receive creation with thanksgiving and thereby make it sacrament. Some of the Church teachers say that this is the meaning of the tree of knowledge of good and evil. This tree stands for all the created world: if received with thanksgiving it brings good, for we receive it as a love gift and not as mere matter, as a ring gift and not mere gold. If creation is grabbed for pleasure alone, it brings evil and death, not because matter is evil, but because we expect life from something which bears life but is not Life Himself.

Only when Adam and Eve, that is, you and I, had accustomed ourselves to the veiled glory of God’s light within His material creation would we have been able to partake of the Tree of Life. The fruit of this tree is the Holy Spirit, whereby man not only beholds the glory of God but He now receives this glory within Himself. Here, deep calls to deep. A god by grace communes with God by nature. 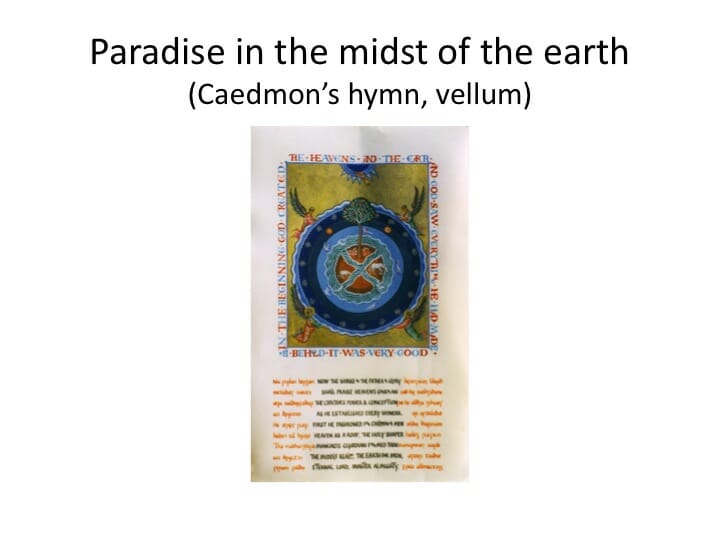 Note that the Bible begins with verdant creation. Let’s think of it as a jungle. God then plants within it a garden. This garden is an artwork, a product of God’s imagination fashioning the wild jungle. Paradise is a God-made icon, an image of His plan for the world. It bears the stamp of His character in a richer way than the wilder world outside.

The divine Gardener then places man and woman within this paradise and says, make it your own, expand the boundary of this garden until all the world is paradise.

Paradise is a Persian word, and means a park for a king in which he enjoys the company of his friends and takes pleasure with them in its delights. So this Eden is not merely a garden but is above all a place of communion. It is an expression of love, and the setting for mutual love. It is not merely something to look at, but is a nuptial chamber in which God and man find union. 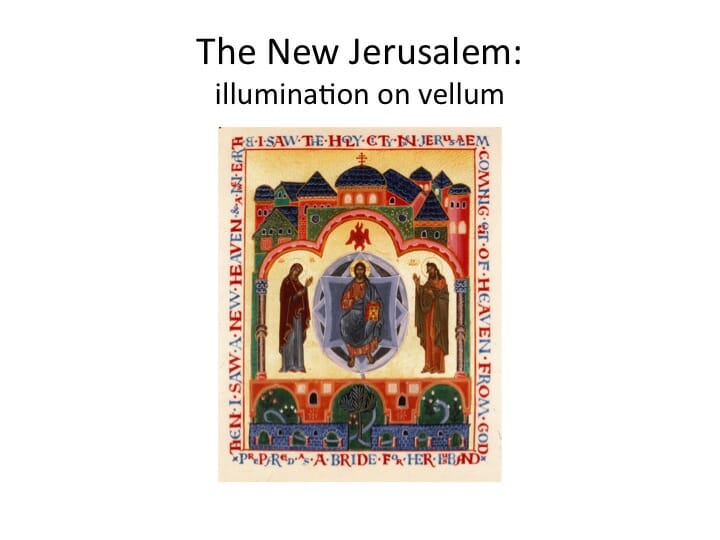 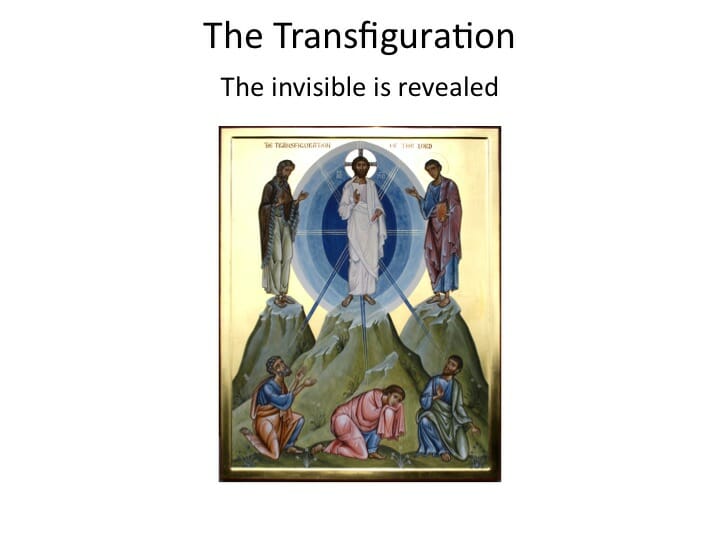 And so we already come to our first icon, the Transfiguration.  In the next sections we will in fact concentrate on three icons: the Transfiguration, Pentecost and finally a frescoed church regarded as a single image of the heavenly city. We will see what insights they may offer us regarding art, ecology and community.