December 20, 2017The Drawings of Elena Murariu

Conserve or Restore? A Question of Ancestor Kisses 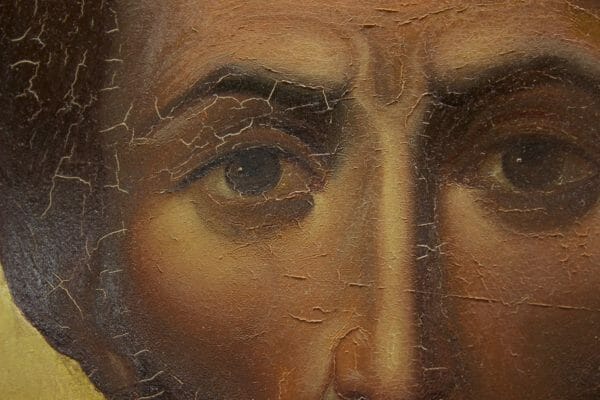 Conserve: To protect from loss or harm; to keep quantity and quality constant through physical or chemical reactions or evolutionary changes.

Restore: To bring back into existence or use; to return to an original condition.

Close in definition, the differences when applied to art treasures can be catastrophic. Consider the botched effort to “restore” Elías García Martínez’s 120-year-old fresco “Ecce Homo” which had deteriorated from humidity in the church of Santuario de Misericordia of Borja in northeastern Spain.

Results like this are tragic when artists attempt to repaint the original.

Conservation
“My job is not to paint over injuries,” says conservator Elena Valentinovna King. “My job is first to make sure the artifact is structurally sound. I then carefully remove layers of grime and deteriorated varnish. Typically, I must compensate for losses or disfigurement using conservation grade materials. Finally, I apply a coat of varnish to unify and saturate the surface.”

Elena holds a master degree in art conservation, specializing in Byzantine icons, from St. Petersburg Academy of Art, St. Petersburg, Russia, as well as a master in painting from the Academy. Her expertise is broad, having stabilized hundreds of important icons, including work on 12th century frescos in the Cathedral of Christ the Savior in Pskov, Russia, and 14th and 15th century icons in the Pskov Museum’s permanent collection. She and her husband moved to the United States in 1997 where Elena worked as senior conservator in several of the country’s top conservation centers before establishing an independent service.

Over the last 11 months, beginning in September 2016, Elena has intermittently worked on site at Panagia Pantovasilissa Greek Orthodox Church in Lexington, Kentucky to preserve the integrity of a precious collection of icons painted in the mid-20th century on Mount Athos.

Panagia Pantovasilissa Church, Eparchy of the Ecumenical Patriarchate of Constantinople, was the first so named in the United States, having dedicated their church building in 1953. After more than 60 years in the same location on Tates Creek Road, the parish initiated construction of a new church in Fall 2013 and moved their home in December 2015 to the intersection of Tates Creek Road and Rebecca Drive. An important part of the relocation process was the care of the four large icons and 12 smaller icons of the apostles that had been in place on the original iconostasis since the late 1950s.

What’s in the Name? The Patronal Icon of Panagia Pantovasilissa
Greek immigrants began clustering in Central Kentucky after the First World War and several Balkan conflicts. By 1948 they founded the mission parish of Panagia Pantovasilissa in Lexington. The patronal name of the community was derived from an icon that once resided in the great church of Hagia Sophia constructed in Constantinople (532-537) by order of Emperor Justinian I. Shortly before the city fell to Mehmed II on May 29, 1453, the Panagia icon, reputed to be one of the four that Evangelist Luke painted, was dropped into the Marmara Sea, along with other cherished panel icons from Hagia Sophia, to preclude their desecration by invading Ottoman Turks.

The Panagia icon was found on the opposite shore of the Marmara near the village of Triglia in Asia Minor. In response to miracles surrounding the arrival and presence of the icon, the citizens of Triglia moved it to a nearby monastery which was later converted to a parish church named Panagia Pantovasilissa in honor of the icon.

The 1918 Armistice of World War I, and the failed campaign of the 1919-1922 Greco-Turkish War to realize the Megali Idea, brought about massive deportations of Greeks from Turkey (Asia Minor). The “Great Idea” of recovering Constantinople (present Istanbul) and her former territories was not to be, but rather an expansion of Turkish control over Asia Minor under the leadership of Mustafa Kemal, Ataurk. Triglia families forced to leave their homes relocated in Raphina, Attica, in southern Greece, taking the icon with them. A new church named Panagia Pantovasilissa was built in Raphina where the original icon is still enshrined today.

Many of the founding families of Lexington’s Panagia Pantovasilissa Church came from Raphina and can trace their ancestry to Triglia where the icon washed ashore after its sea journey from fallen Constantinople in the 15th century. To affirm the parish’s historic relationship with the miraculous icon, Helen Kafoglis commissioned Hieromonk Seraphim Oftalmopoulou of Karayae Monastery on the Holy Mountain (Athos) to paint a copy in honor of her parents, Stathis and Anna Kafoglis, who originated from Triglia. It was delivered to Lexington in 1956. The other icons on the iconostasis, also by Hieromonk Seraphim, arrived in 1959.

Preservation
Helen Collis, an honorary trustee of the Cleveland Museum of Art and former parishioner of Panagia Pantovasilissa, was determined to ensure the preservation of these treasures she had prayed before throughout her youth. Her father had personally excavated the earth with a shovel for the foundation of the first temple on Tates Creek Road. On the recommendation of Dean Yoder, senior conservator for the museum, Mrs. Collis consulted with Elena about taking measures to protect the icons. The parish got behind the effort and raised funds for the project.

Because of Elena’s knowledge of antique materials and her skill in performing structural and cosmetic repairs, the museum had previously commissioned her to stabilize an extremely valuable acquisition before further conservation procedures could go forth. It was a 15th century Eleousa Theotokos icon attributed to Angelos Akotantos, known for marrying Byzantine and Western artistic elements. Angelos was one of the primary artists of the Cretan School, along with Andreas Ritzsos, that coalesced in Heraklion a few decades before the final siege of Constantinople. A century later El Greco (1541-1614) received his early training at this new center of post-Byzantine painting in Heraklion.

The icons of Panagia Pantovasilissa, while solidly within the Byzantine legacy, reflect this evolution of the Cretan school toward a partial fusion with aspects of Renaissance aesthetics. In contrast with the Panagia itself, which is a copy of a much older prototype, the three other large icons that inhabited the first iconostasis and the icons of the 12 apostles are more painterly. Their portrait-esque modeling using a range of color to determine brilliance and contrast (chiaroscuro) creates a sense of depth. This affinity for one-point perspective is one of the primary characteristics of Renaissance painting. 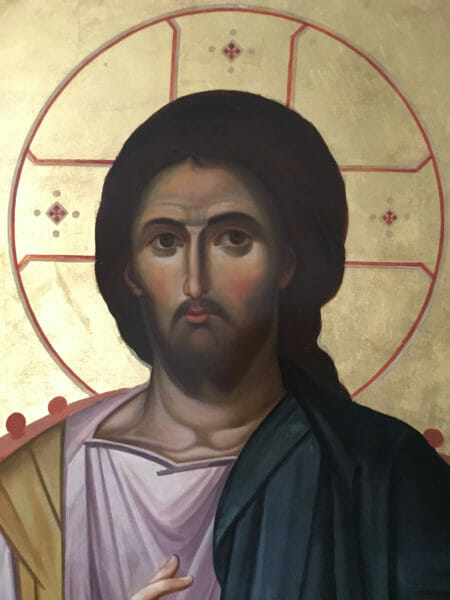 The artist
Hiermonk Seraphim was a mid-twentietn century iconographer and talented painter in the Cretan tradition stylistically influenced by the works of Angelos Akotanto. His icons, like those of Angelos, maintain a passion-less intensity that encourages prayer to the prototype more than admiration for the skill of the artist who created the images. 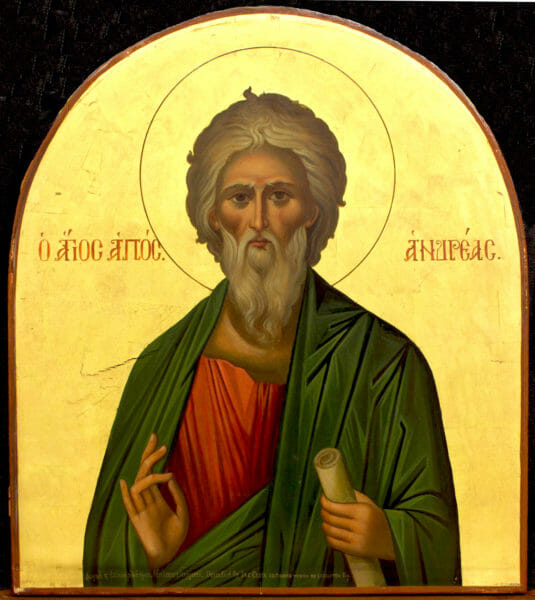 The second iconostasis constructed in marble by *Fr. Cosmin Sicoe for the new temple will support four large icons. Besides the Panagia, they are: the Pantokrator (Christ Enthroned), St. John the Forerunner, and St. Basil the Great. 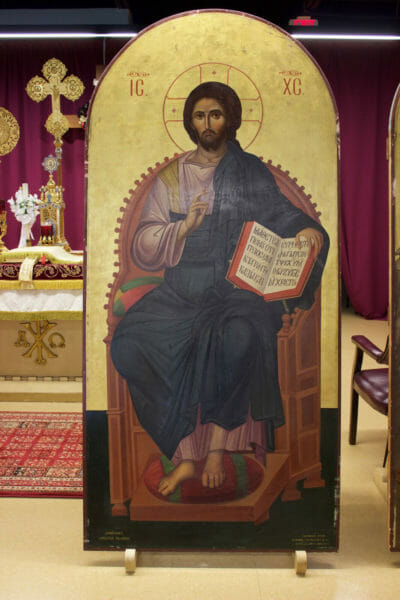 St. John the Forerunner and Baptizer

The kisses of ancestors
The work of a conservator is archeological, revealing the material culture of past activity. It is also curative without risking “loss or harm.”

“It is inevitable with time, local atmospherics, smoke from lampades, and the loving gestures of lips and hands, that damages are suffered,” says Elena. Examples of unintended harm are the lip-greased kisses on the icons, some probably dating back to when the icons first arrived from Greece. “There are many kisses on all the icons, the heads and feet. I can do nothing to remove them because lipstick bonds with the paint on a chemical level. If I completely remove the kisses, the paint will come with them down to the gesso. These icons will always be signed with love, the kisses of ancestors.” 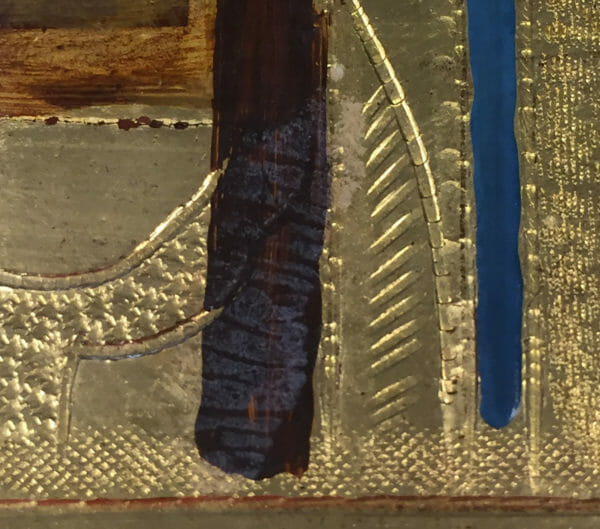 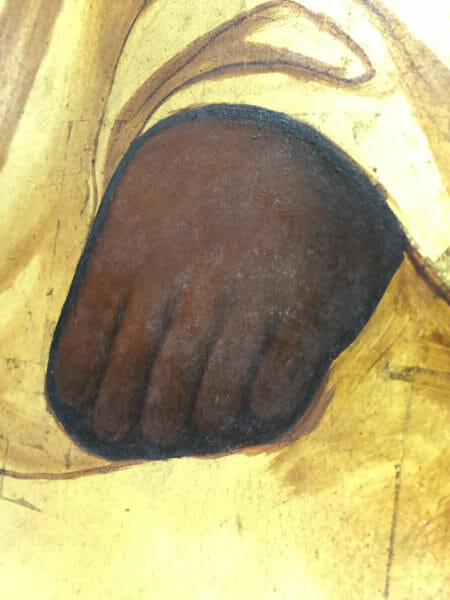 Kisses on the foot of Infant Jesus

What Elena can and does do is to patiently clean the icons in stages. Over time, environmental stresses, including oxidation and aging as well as handling, cause weaknesses that lead to cracking, delamination and flaking. Note the fine separation lines on the face of St. Basil (header icon of this article) that expose the white gesso foundation. Inexpert treatment of stress-paths can actually hasten degradation.

The professionally trained conservator begins with analysis of the materials that were used to build the image. The monastic artist of the Holy Mountain who painted the icons of Panagia Pantovasilissa worked in the ancient technique and medium of egg-tempera, which was refined in the imperial schools of Constantinople and Thessaloniki and spread throughout the empire to the Balkans and Russia. 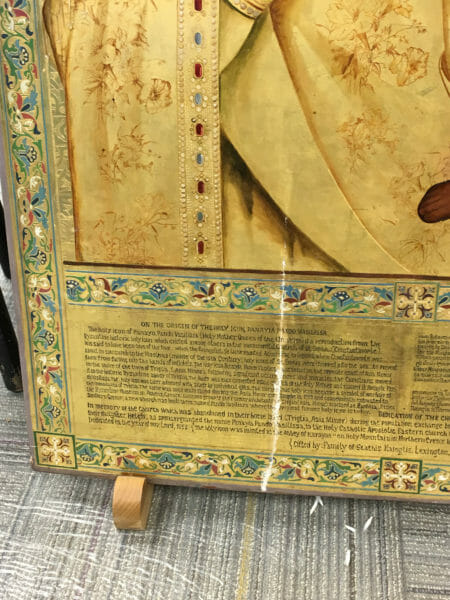 Repairing cracks
Hiermonk Seraphim of Karayae Abbey, who made a copy of the original Panagia icon from Hagia Sophia, added a detailed inscription in beautiful calligraphy. It describes the history of how the icon came via Triglia to Raphina in southern Greece. A split in the panel cuts through the left quadrant of the script. Splits like this are caused when splines remain taunt but the panel bows.

“These panels were made from pine available on Mount Athos. It’s a very knotty wood that can, in time, declare itself through the gesso to the painted surface. All wood has a very active afterlife; it will always respond to its environment.”

Repairs to this kind of natural wound are surgical though not invasive.

Damaged gold
Hiermonk Seraphim used generous amounts of gold-leaf on all the icons. The fabulous “punch” work on the Panagia is a testament to his skill in this technique of ornamentation. 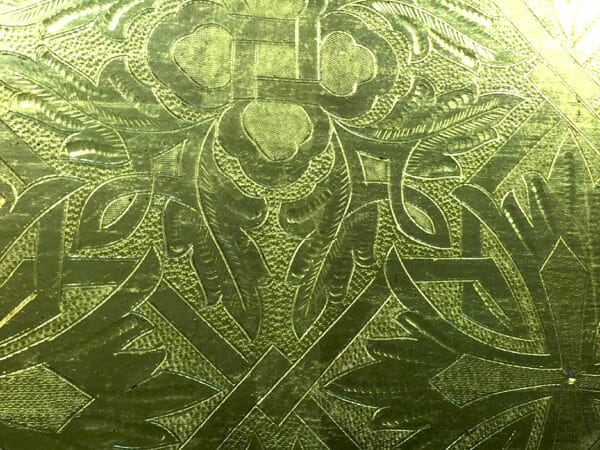 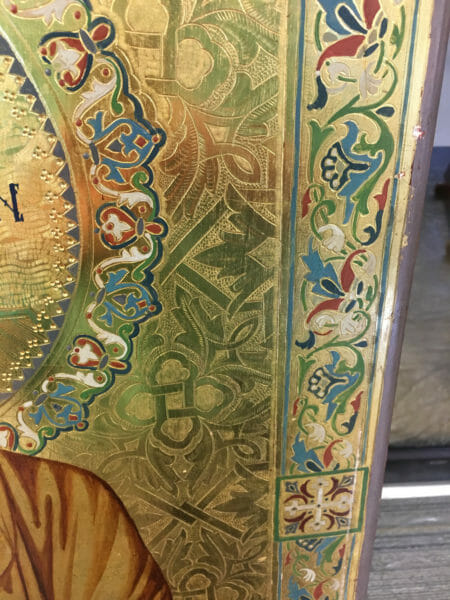 The conservator uses specialized materials for each type of compromising event. Bruised areas of gold, for example, are treated with mica powders diluted with shellac rather than re-gilding, as some amateurs venture, resulting in signature patches.

The conservator’s tribute
The icons of Panagia Pantovasilissa Church are “museum quality,” Elena says. But her understanding of their value goes beyond that of art investor and museum collectors. Responding to suggestions that the icons be replaced with newer images for the new location, Elena submitted these remarks in her proposal:

“If these icons are replaced, we lose this connection and part of the rich history and traditions in this community. How many generations offered prayer upon these icons in a moment of despair or through tears of joy? The icons are imbued with the energy of the congregation throughout its history.  If these icons are removed and replaced, this connection with the past is lost, leaving the future members disconnected.  In Russia, we use the expression namolennaya icona, which means much prayed upon; we consider such icons priceless.”

*Fr. Cosmin Sicoe
Priest of Panagia Pantovasilissa Church from June 2015 to June 2017, who oversaw the completion of the interior narthex, nave and altar areas.

Takeaways for all churches to responsibly address:
1. Soot from lampades, votive candles and incense when left to build up for decades has a corrosive effect on icons. The first layers of soot bond with the varnish, and after successive layers, the icons darken. Minimize direct contact as much as possible and employ a conservator to revitalize the surfaces.
2. Lipstick worn when venerating icons is a kind of accidental vandalism. With the exception of fire and axe, there is hardly a worse threat to an icon. Lipstick forms a double-bond that seals existing grime to the surface and attracts additional debris to be glued to the icon. Educate parishioners to remove lip-grease coloration before kissing an icon. 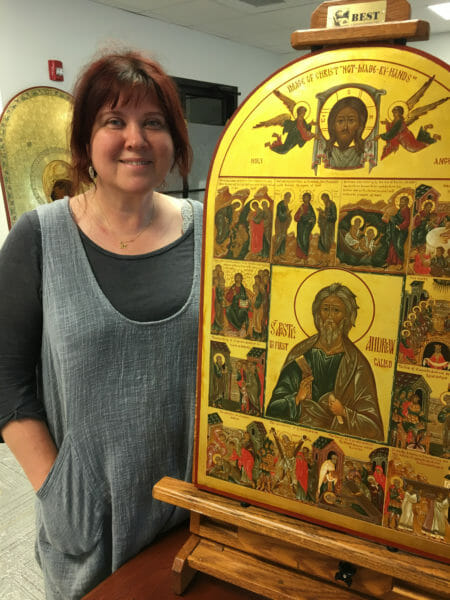 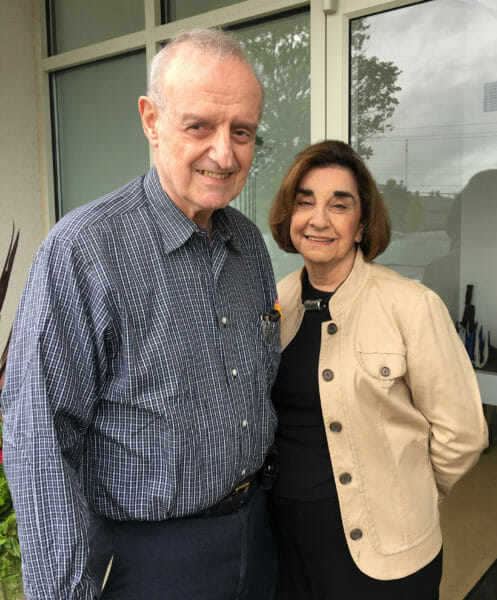