A New Cathedral for Montenegro – Thoughts on the Architecture 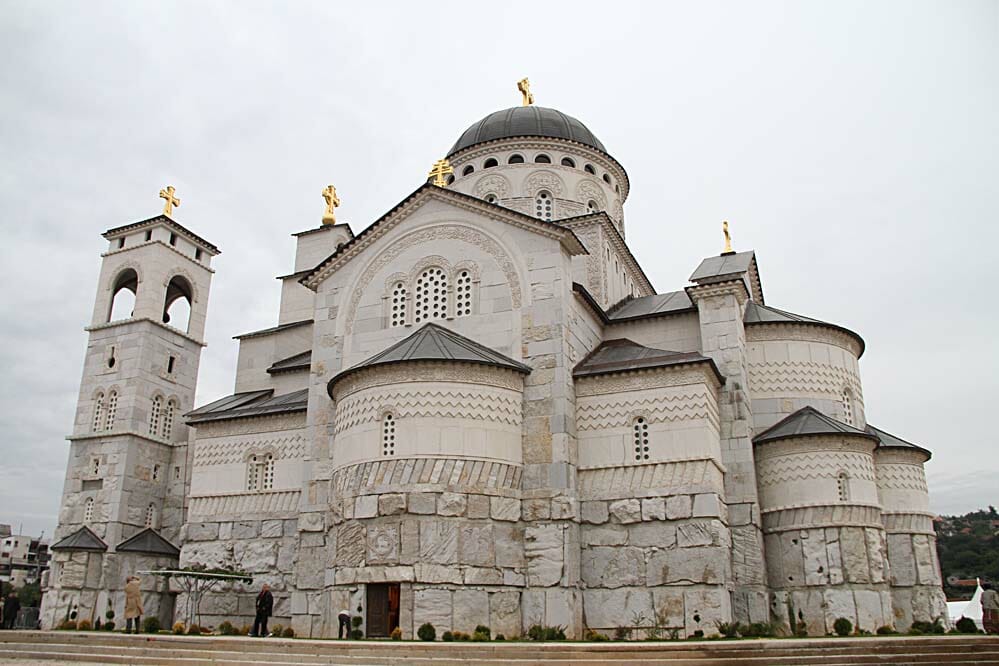 Cathedral of the Resurrection, Podgorica

On Monday the primates and hierarchs of many nations gathered to consecrate a new cathedral in Podgorica, capital of Montenegro. Coverage of the grand event can be found on many news sites, but here I would like to reflect upon the building itself and its appointments.

Construction of the cathedral began in 1993. It is roughly 14,000 square feet and is a cathedral of the Serbian Orthodox Patriarchate. The architect, Dr. Predrag Ristic, is a towering figure in the Serbian church. Now in his 80s, he has built almost one hundred churches in his career, fourteen of which he saw destroyed in the wars of the 1990s. Ristic grew up in a Belgrade that was filled with artists from Imperial Russia. His family fought in the wars to liberate Thessaloniki from the Turks, and later suffered greatly due to their opposition to Communism. Ristic’s life has instilled in him a rare sense of purpose and determination in his service to God, a service that consists of undoing the damage of a century of war and unbelief.

Dr. Ristic says the following with respect to church architecture: “It is impossible to build a temple… without fasting, repentance, and the Descent of the Holy Spirit. Even then, the temple is not built, but comes down from heaven to earth, the same as the bread and wine of the Liturgy are no longer bread and wine, but the body and Blood of Christ… Therefore, the temple has to have perfect harmony characteristic of the Kingdom of Heaven, for only in such a space is it proper to place the icons and frescoes. This is an area that we prepare for the descent of the Holy Spirit and the coming of Christ. We welcome them as Abraham welcomed the Trinity at his table.” 1 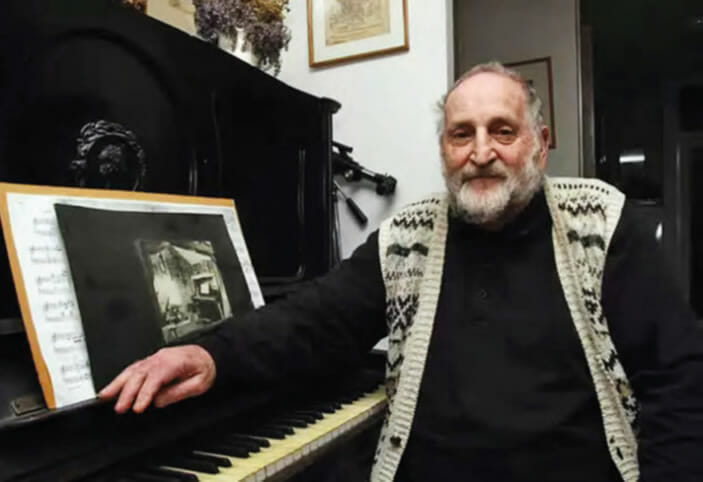 The Cathedral of the Resurrection in Podgorica is certainly one of the most interesting Orthodox churches built in our times. Unlike other new cathedrals we have seen recently, the exterior does not seek to reflect High-Byzantine perfection. Rather, it is a charmingly eccentric design. It has the slightly awkward qualities of any real cathedral, expressing the cultural tensions between the high Imperial style and the capabilities of local craftsmen. The general form of the west front, with its twin towers and huge arch, is clearly modeled on the Cathedral of St. Tryphon in Kotor – a medieval monument that mixes Romanesque, Italianate, and Byzantine styles. Ristic took this distinctively Montenegrin style and gave it unexpected new life at the Podgorcia cathedral. 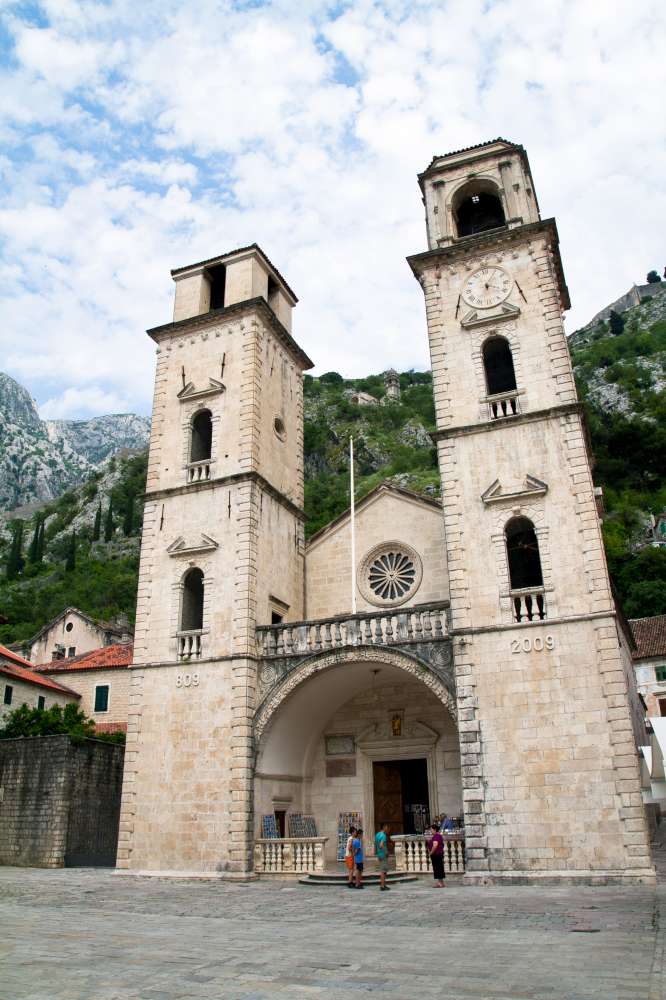 The exterior is built from rough blocks of white stone. The textures are typical of old Montenegrin churches, but here the roughness is startlingly exaggerated. If the whole building were so crude, it would almost look like a mockery. But the stone gets smoother as it goes up and then is richly carved with the most elegant fine details towards the top. Somehow it works, and it works very well. I cannot help but think that only a very old and accomplished architect would attempt such boldness!

There are other eccentricities to the design. The rough blocks of stone at the foundation have several icons carved into them. The icons are haphazardly located, appearing almost like the unauthorized work of a graffiti sculptor. It seems almost impossible that these carvings could coexist with the rough stone around them and with the refined Byzantine ornament high above, and yet, again, it works. Another peculiarity is the seven rooftop crosses. They vary not only in style, but even in orientation. 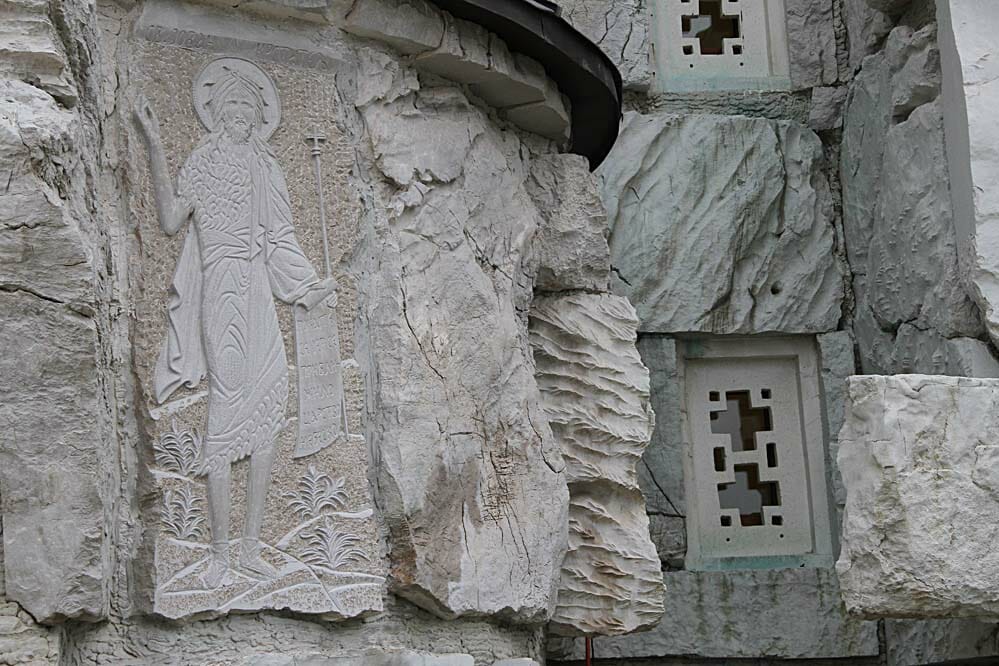 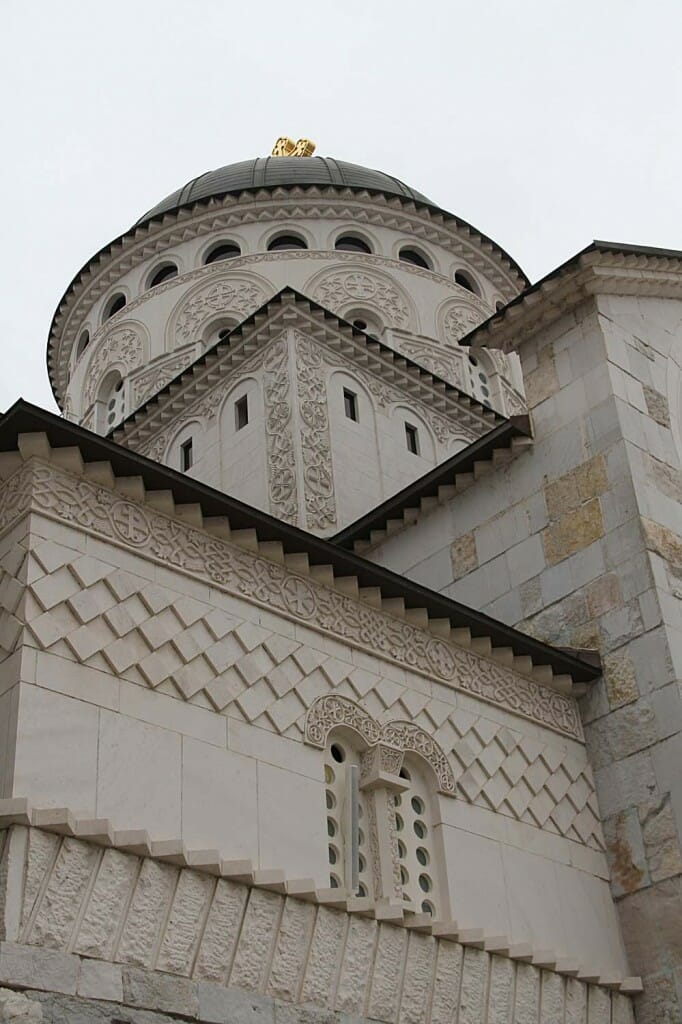 The interior is a grand and complex space appropriate to the large scale of the church. It is richly ornamented with marble floors, murals, and furnishings. Unfortunately, this interior scheme does not have the same medievalist charm as the exterior. The iconographic murals have a gold background – a practice that was fashionable in Russia circa 1900. It is an odd choice for this rough stony church, as the murals seem too precious and delicate for the architecture. The central chandelier also looks late-Russian, and is aggressive and unlovely in form. A medieval choros of Serbian style would have worked much better. It seems doubtful that Dr. Ristic was responsible for some of these interior choices. 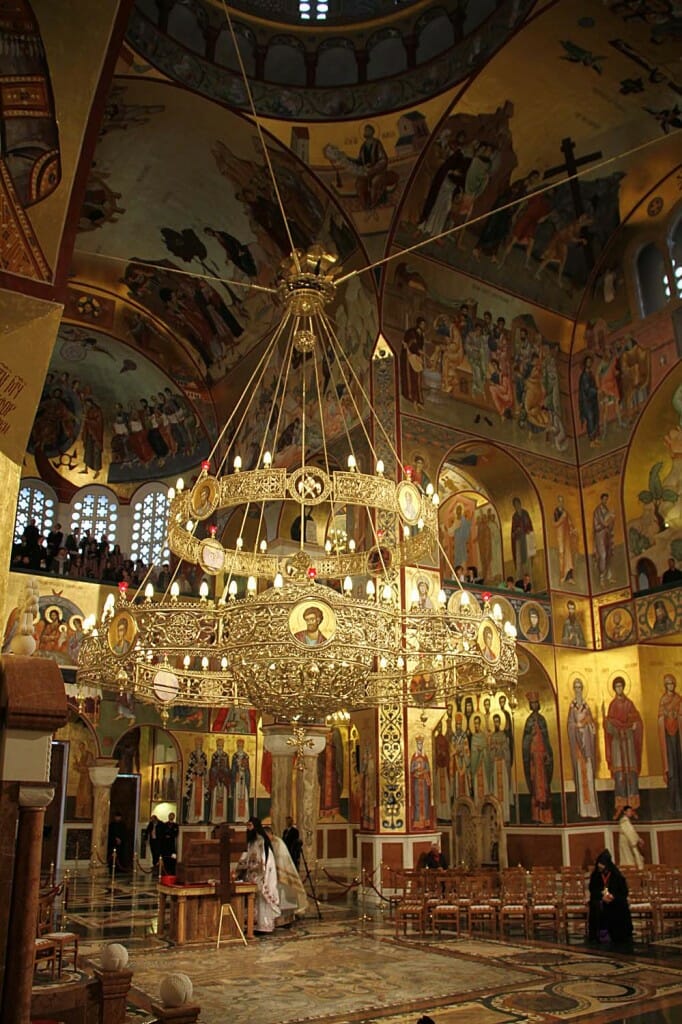 The Podgorica cathedral is a rare example of a new church that truly reflects local traditions and history. It is perhaps even more remarkable in that it offers some new and innovative ideas that are completely harmonious with tradition. There are some elements in the stonework that, in another context, would be seen as modernistic. And yet this building as a whole has not the slightest hint of modernism. It is an entirely medievalist vision, but it has boldness and deliberate imperfection – traits that are now common in modernist architecture and regrettably rare in traditional architecture.

1) Remarks made by Dr. Ristic in Sydney, Australia, in 1996. From: www.svetosavlje.org (Translation by Andrew Gould) 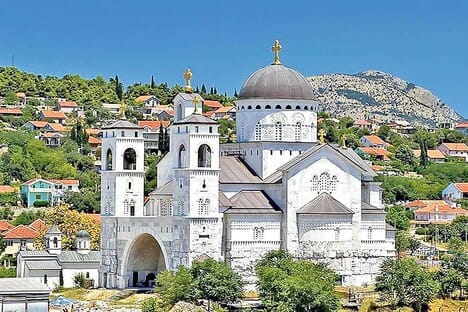 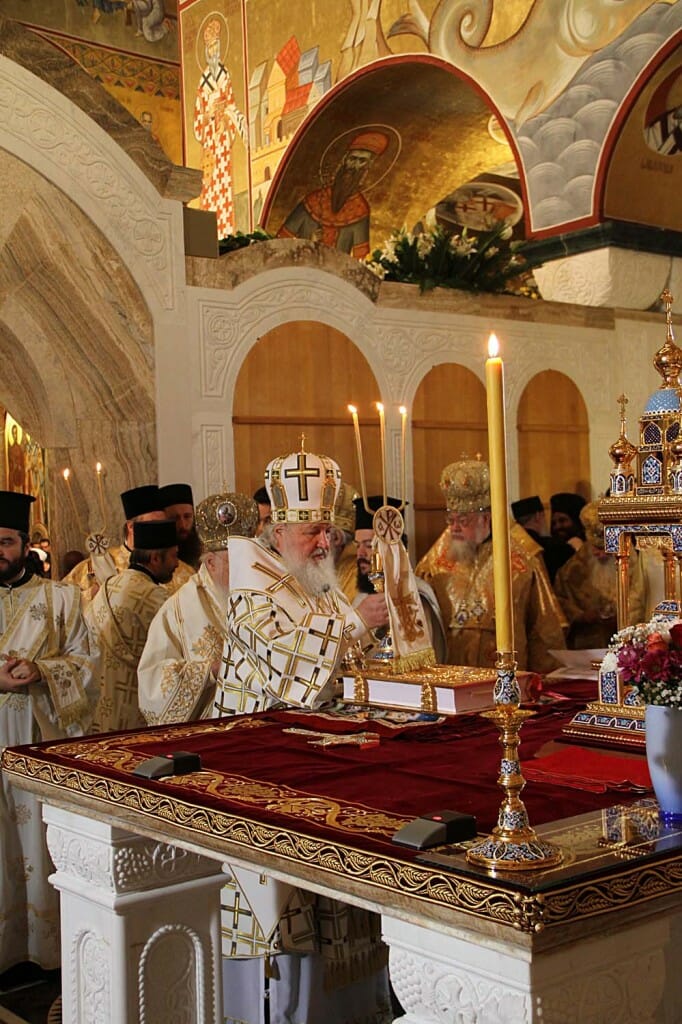 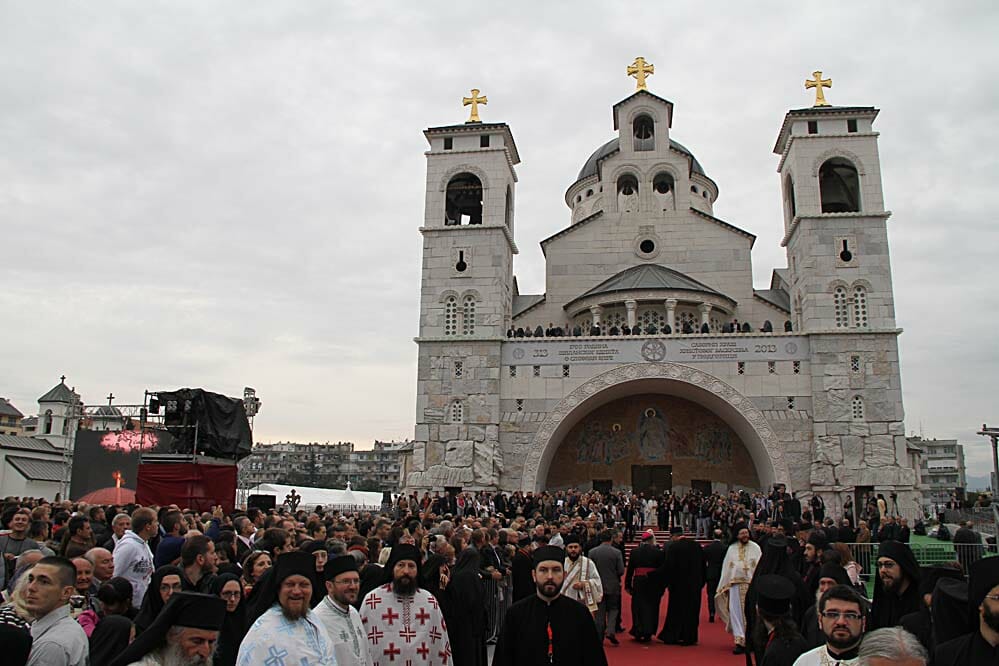 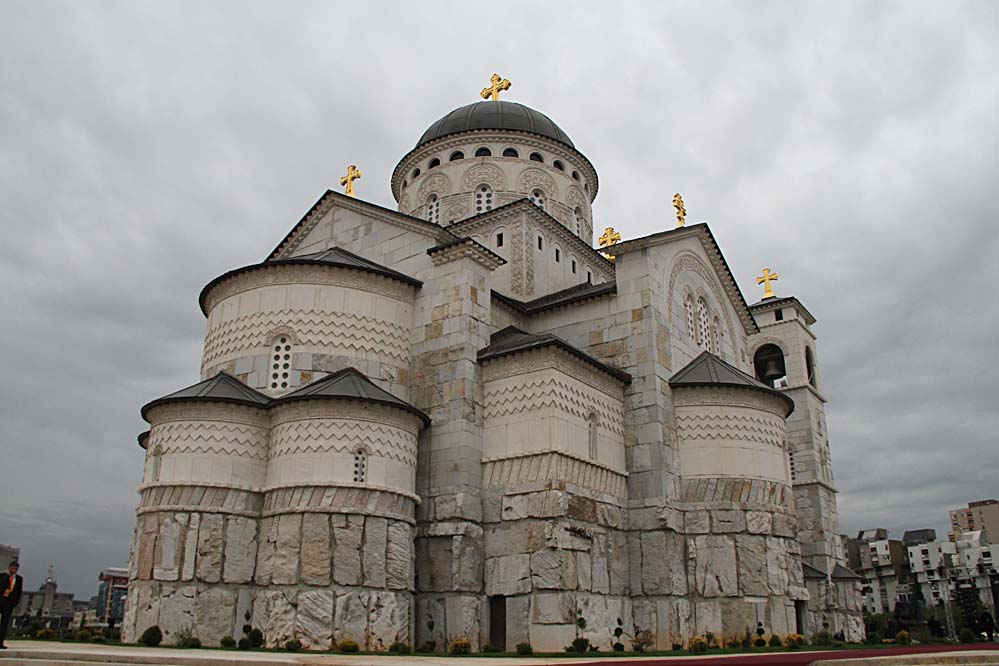 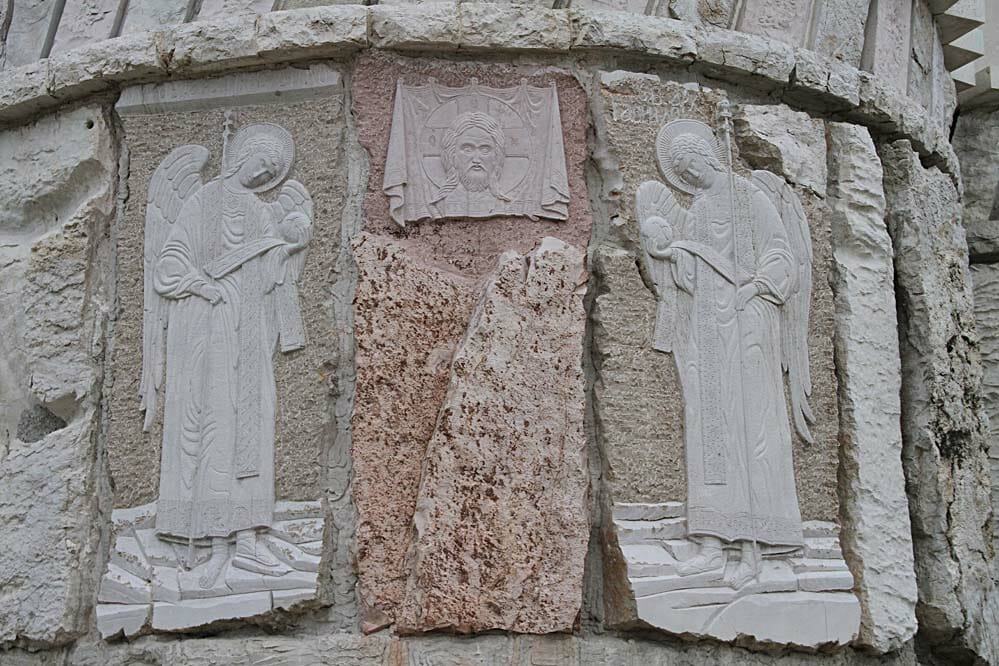 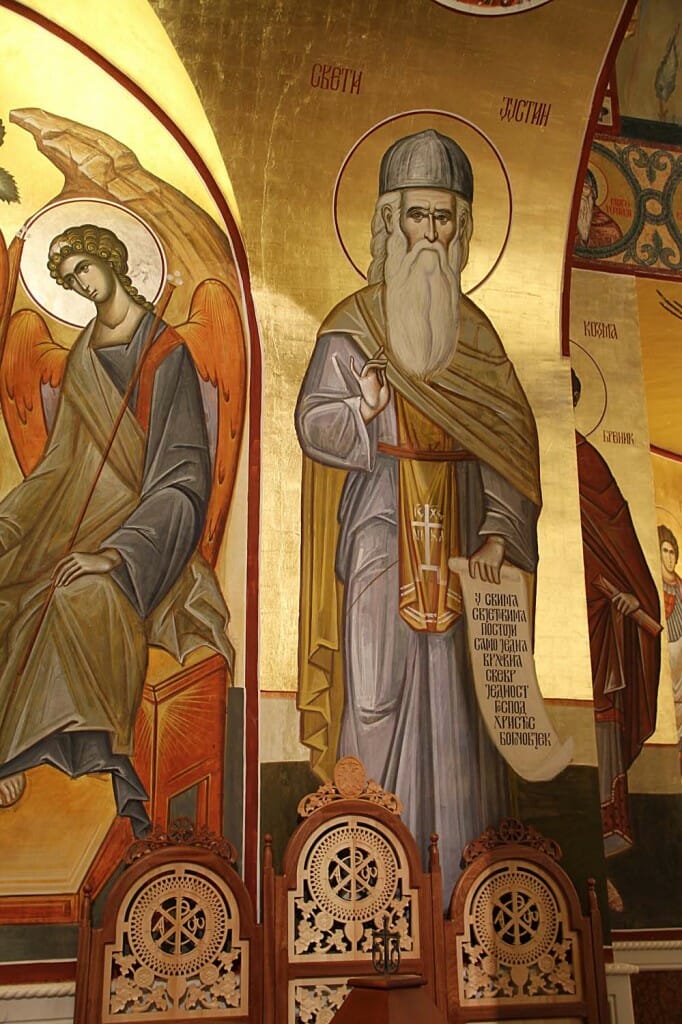 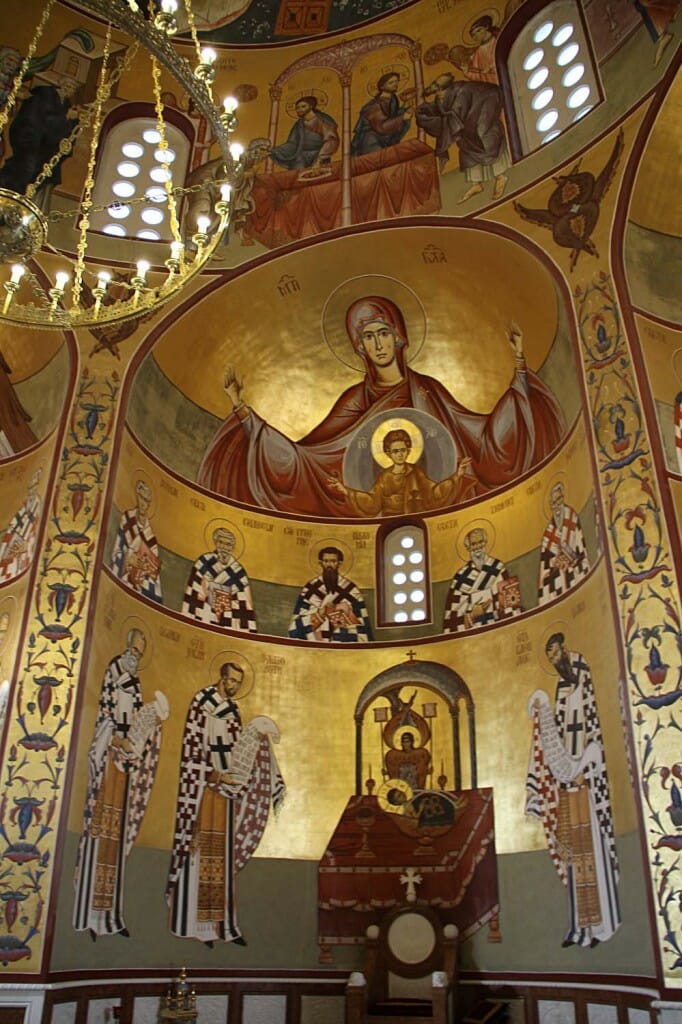 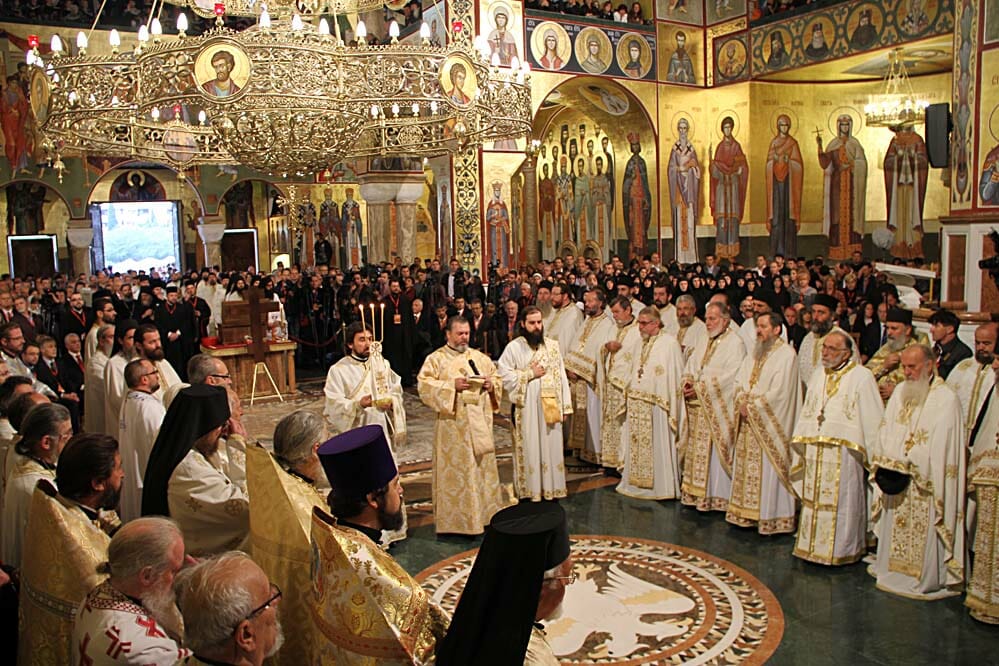