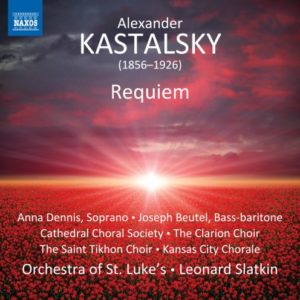 South Canaan, PA—On August 28, the world-premiere recording of Alexander Kastalsky’s Requiem was released by Naxos Records. The recording—which was made during a live performance in the Washington National Cathedral in October of 2018 in celebration of the 100-year anniversary of the World War I Armistice—features the combined forces of multiple GRAMMY-winning ensembles, including the Cathedral Choral END_OF_DOCUMENT_TOKEN_TO_BE_REPLACED