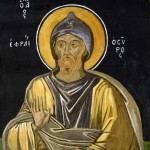 Spyros Papaloukas (1892-1957) was a major Greek painter of the first half of the twentieth century. Almost a legend for some, he was an innovator of Greek landscape painting. Although not mainly a church iconographer, he holds a very particular position alongside Photis Kontoglou in contemporary liturgical arts. He was born in 1892, started END_OF_DOCUMENT_TOKEN_TO_BE_REPLACED